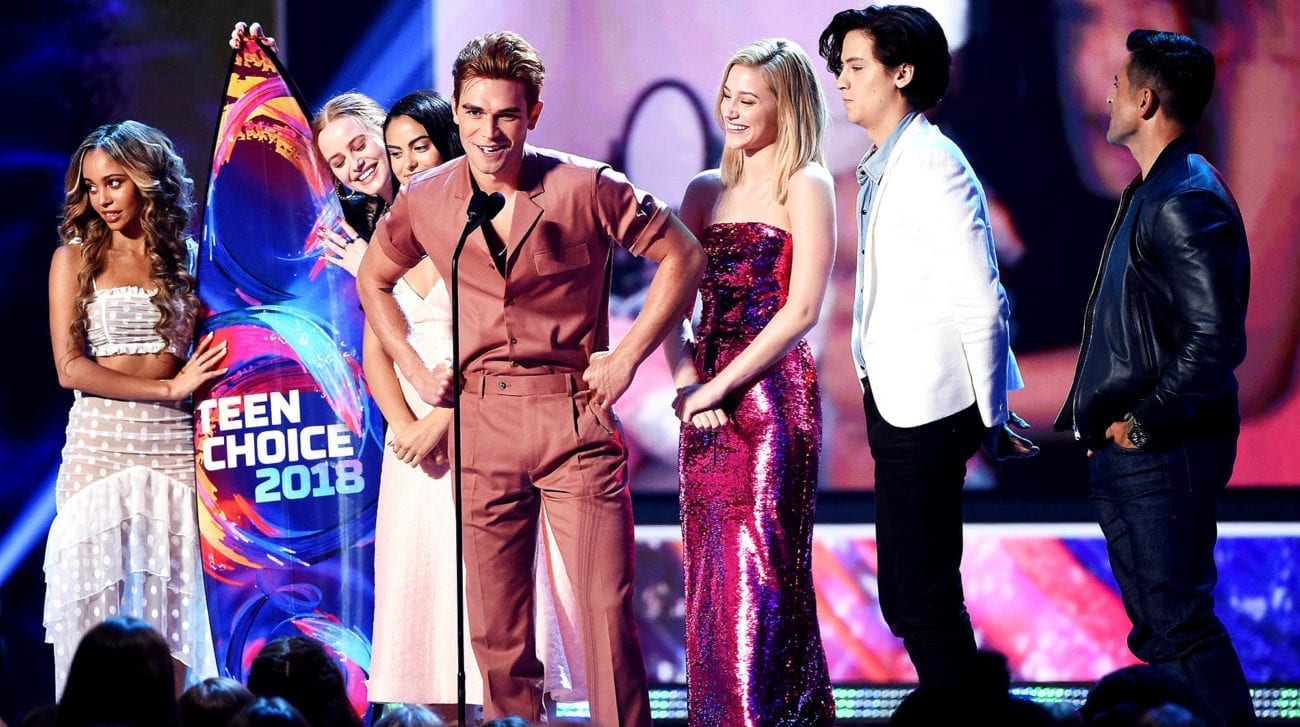 2018 Teen Choice Awards: The snubs, the wins, the WTF moments

This Sunday (August 12) marked the annual Teen Choice Awards – where young people go to celebrate all that is pop culture while surfboards are handed out to the best in comedy, fashion, film, music, sports, television, and, of course, the internet. So many surfboards, so many questionable award categories, so many D-listers vying for attention.

The 2018 edition was hosted by Nick Cannon and Lele Pons, taking place at the Forum in Los Angeles. In addition to honoring the darlings of traditional media, a number of fan-voted categories saw celebs bagging boards for Choice Liplock, Choice Hissy Fit, and Choice Scene Stealer (Riverdale’s Vanessa Morgan, in case you were wondering).

Phew! Well done Riverdale superfans – you can sit down now. “There’s a lot of great shows, so we feel really grateful to be up here,” said KJ Apa, who plays Archie Andrews on the show (and deserved to be sharing that Choice Male Hottie board with Sprouse, in our opinion).

“We started the show two years ago, and I think we’re all kind of surprised about where the show has gone and how it’s been accepted . . . Thank you guys so much for watching the show. There’s a lot of bits and pieces that go into these things, but you guys are the most important. Thank you.”

Apparently someone had been speaking with the angels too, because none other than Shadowhunters bagged the win for Choice Sci-Fi/Fantasy TV Show. A wise choice indeed, and one that only goes to show that the fandom and their ongoing #SaveShadowhunters campaign need not give up on their quest to save the beloved fantasy drama – there’s life in the old beast yet.

A huge thanks to the best fans in the world. We won the #TeenChoice Award for #ChoiceSciFiFantasyTVShow because of you. ✨ #Shadowhunters pic.twitter.com/53yNhVLf7m

While we’re not overjoyed at the Choice Comedy TV Show (The Big Bang Theory – really?), we are stoked Jane the Virgin’s Jaime Camil and Gina Rodriguez took home awards for their comedic performances in the telenovela inspired show. They’ve both proved their acting chops as Rogelio and Jane respectively.

You could argue it’s Marvel overkill, but that’s just the way things go at the TCA – the event is first and foremost a celebration of the mainstream. But it wasn’t only Marvel that received relentless plaudits for its contribution to cinema over the past year – franchises were the flavor of the night, as Star Wars: The Last Jedi, Jumanji: Welcome to the Jungle, and Pitch Perfect 3 all took home boards in separate categories.

In his acceptance speech for Choice Drama Movie Actor, in which he was competing with Jackman, Efron declared: “From the bottom of my heart, I couldn’t ask for a cooler, more amazing person to work with. He’s my Best Dramatic Actor – and a hero, and a mentor, and a good friend. Thank you, Hugh Jackman.”

In terms of the snubs, you may or may not have noticed that Netflix’s 13 Reasons Why wasn’t present in any of the categories – not even one measly nomination. Considering the show is a successful young adult drama that discusses some of the most important and major issues facing young people today, all tied together with a gripping storyline and a stellar core cast, it’s surprising to see that the show wasn’t present at this year’s TCA.

Could it be because of the recent controversy surrounding season two? Or maybe it’s just because the fans wanted to see Riverdale bagging all the boards. (Perhaps it’s a bit of both.)

Of course, what would the TCA be without some fawning superfan displays? But this time it was the celebrities who were doing the goofing, as Crazy Ex-Girlfriend’s Rachel Bloom expressed her love for Nina Dobrev by wearing a t-shirt with Dobrev’s face on the front. It’s cool though – the love went both ways, as Dobrev had a Bloom tee on too. Such japes!

Well, that’s all for another year folks. If we can take one thing away from the 2018 TCA, it’s that Riverdale is rad, Jefron’s bromance is real, and Archie’s gonna need to do some more topless push-ups if he wants to out-hot Jughead. Well go on, Archie – we’re waiting.