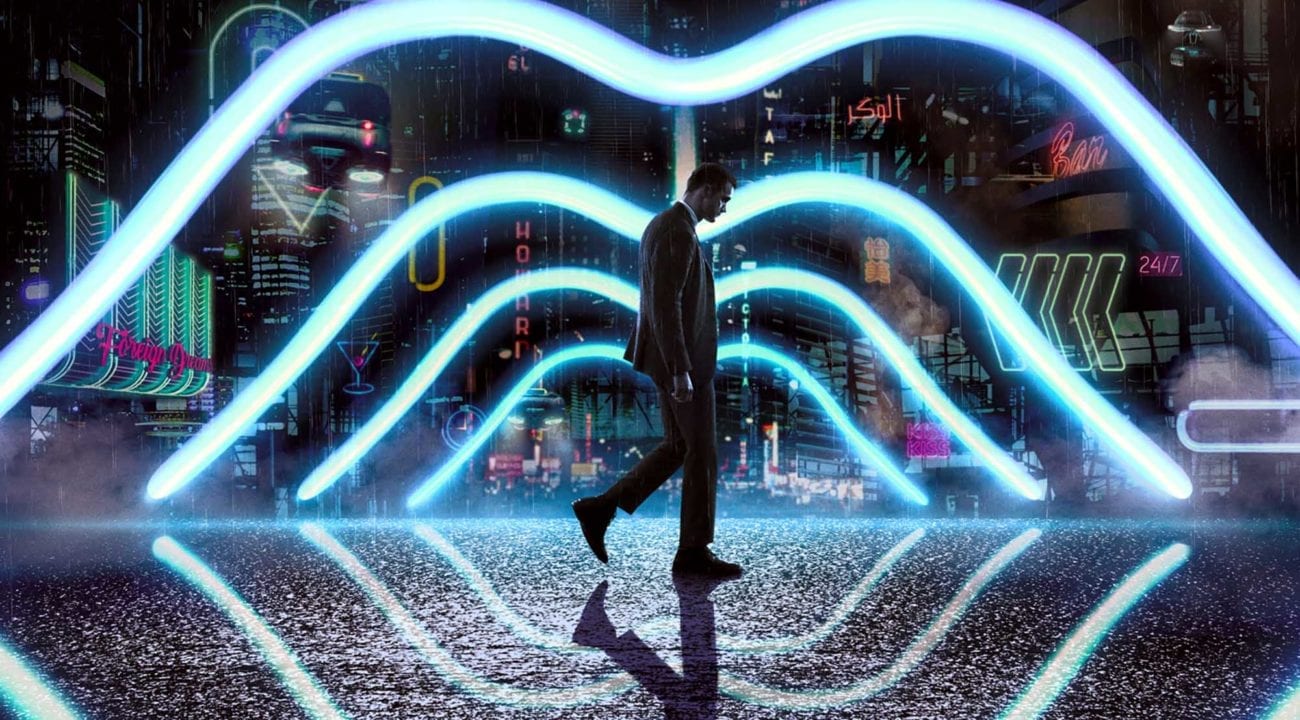 Netflix’s ‘Mute’ could have been amazing. Here’s why

Formerly known as Zowie Bowie, director Duncan Jones, son of rock legend David Bowie, has been attempting to imbue the same space-age zaniness since he released Moon in 2009 as his father did for his music as fictional character Ziggy Stardust. Like his followup Source Code, Moon was celebrated for its small-scale science fiction, its great budget production design, and the intensity of Sam Rockwell’s performance.

Sadly, 2016’s Warcraft was a disappointing third feature for Jones, who ditched his sci-fi roots to direct an adaptation of the popular role-playing game to a less-than-enthusiastic response. Mute promised to be a glorious return to form, a passion project and “spiritual sequel to Moon” stuck in development hell for years and finally saved by Netflix.

Tragically, Mute has largely been torn apart by critics and viewers alike, joining The Cloverfield Paradox and Bright as panned genre projects eventually to be responsible for the phrase “dumped on Netflix” replacing the similar stigma of “direct-to-DVD”.

One film won’t prevent Duncan Jones from remaining a promising director; this list will tackle the best elements of Mute that unfortunately ended up being greater than the sum of its parts.

Say what you will about his last two films, Duncan Jones is still a passionate creator with heaps of talent. Moon and Source Code proved the director works incredibly well within the science-fiction realm and possesses a keen eye for simple yet effective visuals and tense action. What distinguishes Mute from his first two features is its screenwriting. Warcraft and Mute mark the first times Jones tried his hand at cowriting his own films and, sadly, it shows. Perhaps a step back from the page to focus on the camera could have boosted the film’s chances.

Although the offerings of Alexander Skarsgård haven’t been too impressive in recent years, his lesser known roles in Diary of a Teenage Girl and HBO series Big Little Lies were extraordinary. Even those remained unconvinced by his mumbling efforts in The Legend of Tarzan may have been persuaded by the promise of remaining silent throughout the whole film. Paul Rudd (Ant-Man) attempts a more serious performance alongside Justin Theroux – the best part of last year’s The Lego Ninjago Movie and a rare appearance for the actor outside the work of David Lynch – so surely we’re on to a winner?

The streaming giant certainly has had its ups and downs in recent memory, but until the last few months its foray into original feature films had been promising. Beginning with a collaboration with True Detective’s Cary Fukunaga, Beasts of No Nation promised to change the way we saw home streaming forever. Netflix’s work with Dee Rees (Mudbound) and Bong Joon-ho (Okja) promised a future in which streaming services would employ talented auteurs for exclusive, risky, original films. With the announcement of Duncan Jones making a departure from blockbusters for a Netflix original, Mute seemed destined to join their ranks. Instead, the film stands alongside Bright as a disappointment for the on-demand service.

First of all, Duncan Jones returning to science fiction after a weak dabble with broad fantasy was tantalizing. Moon and Source Code were exciting and new: action films with outstanding performances at their core and an eye for striking visuals & strong character drama. Not only that, but Mute took advantage of the resurgence of the science-fiction neo-noir, seemingly ripe for fans of Blade Runner 2049’s depressing cityscapes and moody detective plot desperate for more. Unfortunately, the final product was less Blade Runner and more Ghost in the Shell.

Anyone familiar with John Williams (Superman) knows a composer can make or break a movie. Themes, leitmotifs, and atmospheric refrains are vital for a thriller’s ambience and tension, especially within a noir genre – and no one understands this better than Clint Mansell. Best known for his collaborations with Darren Aronofsky (mother!), the composer combines an electronic sound with classical music to produce a darkly unique style that usually compliments any film he works on. Sadly, that simply wasn’t enough to save Duncan Jones’s latest effort.

A spiritual sequel to Moon

Since Duncan Jones unleashed Moon – a rare example of a smaller, independent science-fiction film that opened the doors for other, lesser-known directors to try their hand at the genre – fans have been clamoring for more. With Mute, Jones’s promise of his next film being “a spiritual sequel” to Moon shadowed the release of the film as an oath of quality as well as the possible return of Sam Rockwell (Three Billboards Outside Ebbing, Missouri). Despite Warcraft’s poor response, it seemed Jones was due a clean slate and, if anything was to do it, it would be a successor to his first hit.

The Shape of Water proved last year that a character doesn’t necessarily have to speak to convey emotion – or receive an Oscar nomination – and Alexander Skarsgård’s mute protagonist navigating a futuristic world of noise and light seemed intriguing and refreshing. With the support of Paul Rudd and Justin Theroux as Cactus Bill and Duck, two surgeons operating an illegal clinic, the stage seemed set for an enthralling cast of unique personalities and interesting performances. Science-fiction alums Robert Sheehan (Misfits) and Noel Clarke (Brotherhood) made for compelling additions, but sadly, it seems their talents were wasted.

Though it’s now clear that Jones’s talents lie in direction and camerawork more than the written word, his story work on Moon was rife with strong concepts & compelling characters. Support came from Michael Robert Johnson, whose earlier work with the Robert Downey Jr.-led Sherlock Holmes franchise should have assured a fast pace & snappy dialogue. Unfortunately, despite remaining in development hell for several years offering ample time for script doctoring, perhaps the screenplay never got past its second draft.

If there’s one standout factor of Mute that has received almost unanimous praise, it’s the film’s production design. Boasting clean and convincing CGI cityscapes, realistic, dirty sets, and fascinating costume & makeup design, the trailer teased a film packed to bursting with science-fiction concepts & visuals taking cues from Blade Runner but remaining very much within the confines of its own universe. Sadly, Mute’s plot and characterization couldn’t stand up to the lofty heights of its production.

It’s not worth defending any section of Warcraft that primarily involves its cast of human characters, all of whom look as if they had just wandered out of a comic convention, delivering lines like schoolchildren attempting a rough approximation of Shakespeare. However, it’s easy to forget that almost half of its running time follows precisely and expertly crafted orcs. Using startling motion-capture technology and featuring the film’s best actors, Warcraft’s moments of breathing room and weighty action sequences involving the huge green beasts were surprisingly effective, proving the director’s capability to face a challenge.