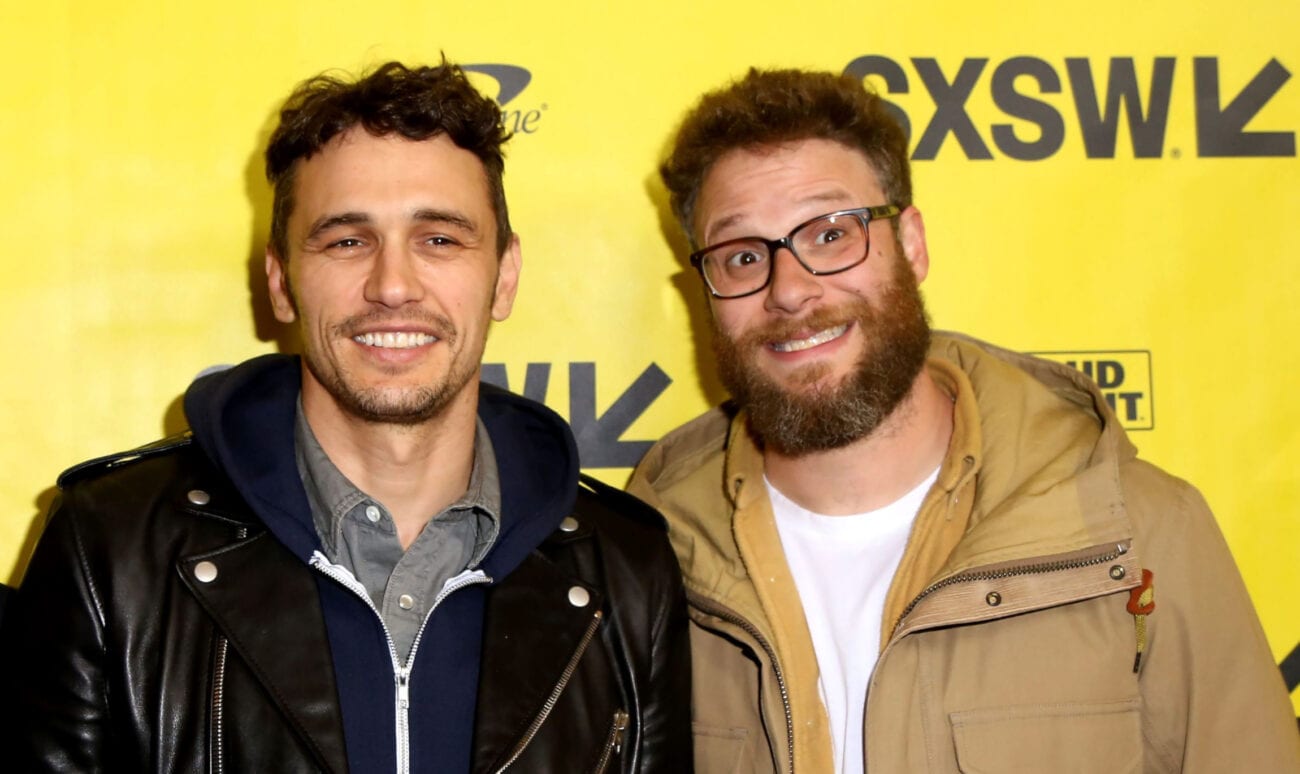 Did Seth Rogen let James Franco get away with being an abuser on set?

If you were alive in the aughts, you remember the comedy powerhouses that were Seth Rogen and James Franco. Going back to 2000’s TV cult hit Freaks & Geeks, Rogen & Franco would rise to fame through the decade, starring in films like Superbad, Knocked Up, and This Is the End. However, could new allegations mean this is the end for both James Franco and Seth Rogen’s careers?

After Seth Rogen performed a skit with James Franco on Saturday Night Live, after acting and filmmaking with him for years, writer Charlyne Yi called him out on her Instagram three days ago, accusing him of continuing to enable Franco while he allegedly abused women and gaslit his victims.

Without further ado, let’s dive right into how this years-old story resurrected a few days ago and broke the internet now. 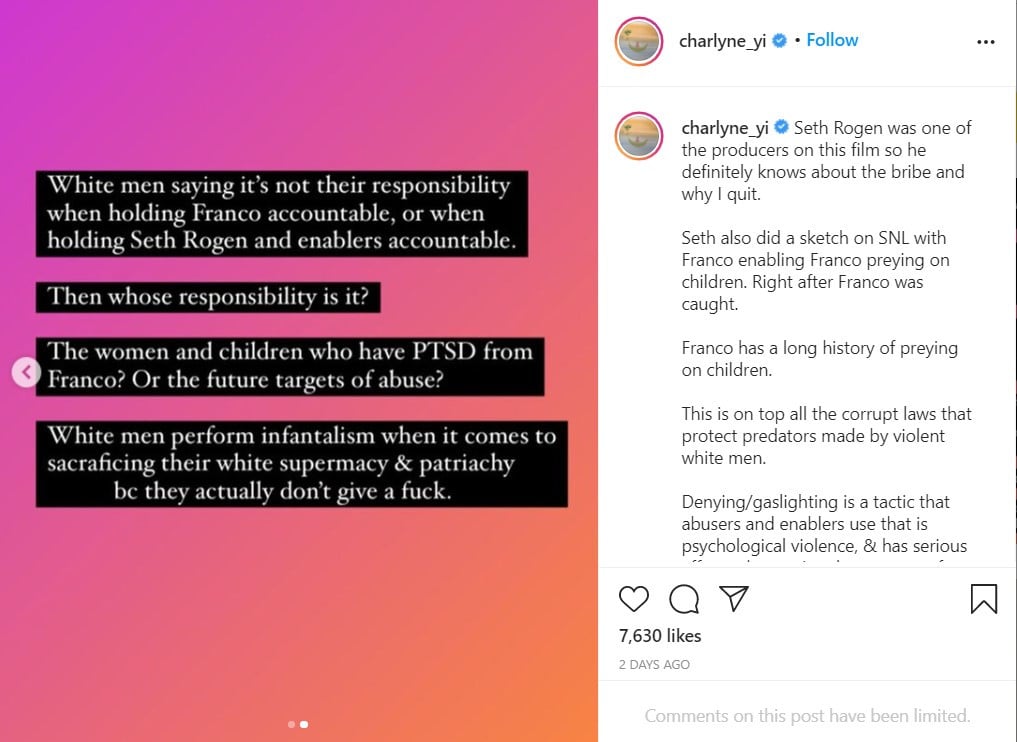 Actress & writer Charlene Yi worked with Seth Rogen & James Franco in 2017 on their film The Disaster Artist, which delved into the making of Tommy Wiseau’s infamously so-bad-it’s-legendary movie The Room. Yi played costume designer Safowa Bright-Asare. However, when she heard about Franco’s allegations, she tried to “break her contract” and quit.

Further, Yi told Indiewire that when she brought her concerns over James Franco’s track record to producers, they “minimized” her, saying “Franco being a predator was so last yr [sic] and that he changed… when I literally heard of him abusing new women that week”. Yi further claimed filmmakers offered her a larger part if she stayed, “exactly the opposite of what I wanted”, she added. 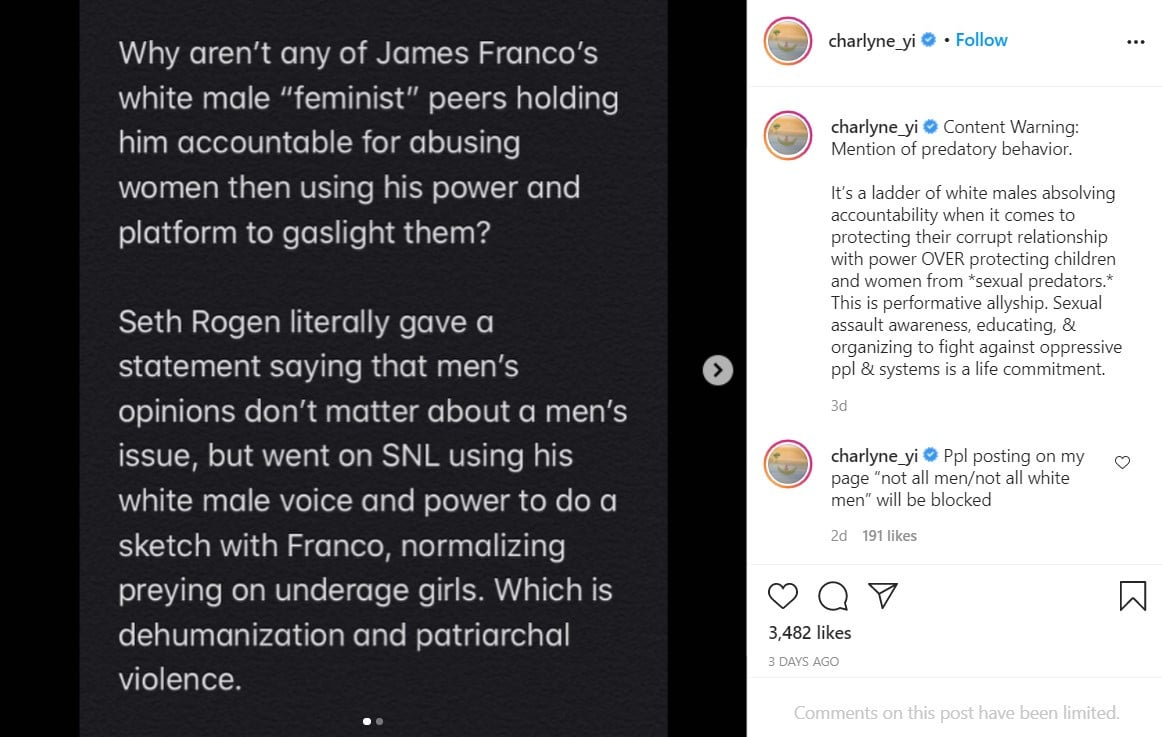 Three days ago, Charlyne Yi posted on her Instagram about how she was asked to share her survivor story at an event last year since Yi is also a sexual assault survivor, an advocate for sexual assault victims, and an activist for reform when it comes to how women are treated in society after they’re victims of sexual abuse.

Yi detailed that she was asked by a friend to speak at an event Seth Rogen was hosting. Yi told said friend no, citing his continued partnership with James Franco, despite the allegations against him for abusing underage girls. She told her followers she explained to said friend about how Seth Rogen working with Franco in the wake of the allegations canceled out his apparent intentions to help women share their stories. 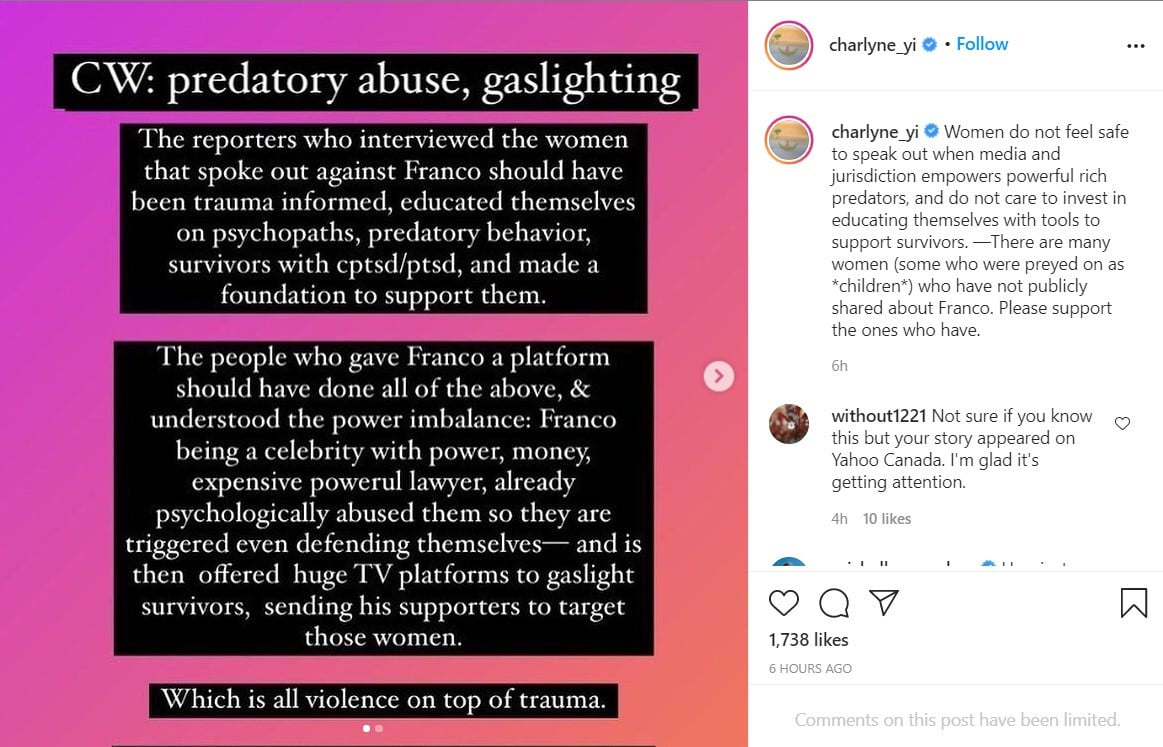 Then, Yi stated her friend ghosted her. “Waiting for men (esp white men) to show up and do the work”, she concluded her Instagram post.

In an earlier Instagram post, Yi wrote: “Enablers are just as toxic and are abusers too. Disgusted by white men choosing power over protecting children and women from predators. Educate, organize, and dismantle corruption in your circles and in the law.” 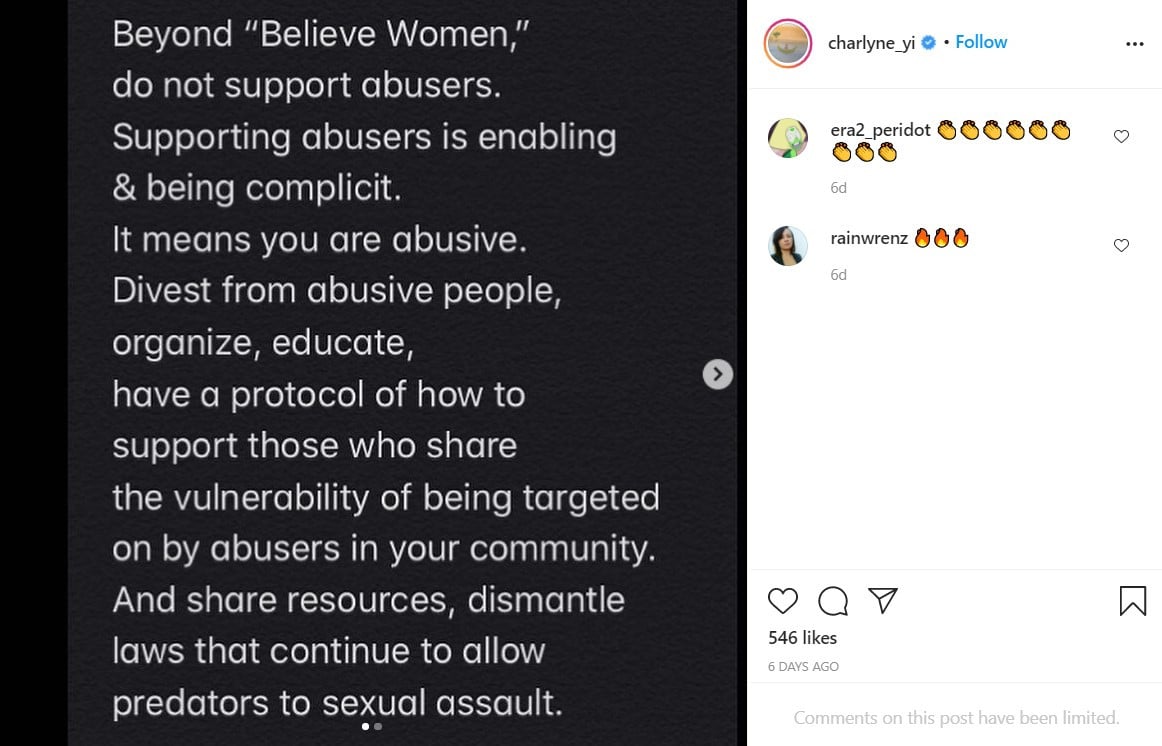 Last month, James Franco settled a lawsuit with women accusing him of “sexually charged behavior towards female students”, whose lawyers said Franco made an “aggressive effort to position himself as the victim and smear the reputation of the survivors.” The settlement was made for an undisclosed amount.

The lawyers wrote in a brief: “We firmly believe Mr. Franco’s claims to be without merit and we are confident that, as we work through the legal process and hear from numerous other witnesses and survivors, we will achieve full justice for the women who have experienced abuse and exploitation at the hands of Mr. Franco and his associates.”

James Franco’s lawyers fired back, claiming the allegations made by Franco’s victims were baseless. “The salacious allegations in the Complaint have made great tabloid fodder, but like most tabloid stories, they are false and inflammatory, legally baseless, and brought as a class action with the obvious goal of grabbing as much publicity as possible for attention-hungry Plaintiff”, they wrote in a brief.

Checking Twitter, Seth Rogen hasn’t released a statement on the latest in the James Franco matter yet. The last story he addressed had to do with Emma Watson and their time together working on This Is the End. Rogen clarified allegations that Emma Watson “stormed off the set” in response to sexist elements in the script.

In 2018, Seth Rogen addressed the allegations against James Franco in Vulture, stating: “The truth is that my perspective on this is the least relevant perspective. I’m friends with these people and I’m a dude. All that combined makes me the last person who should be talking about this . . . There are so many people with real things to contribute to the #MeToo discussion that anything I say is not going to add anything useful.”