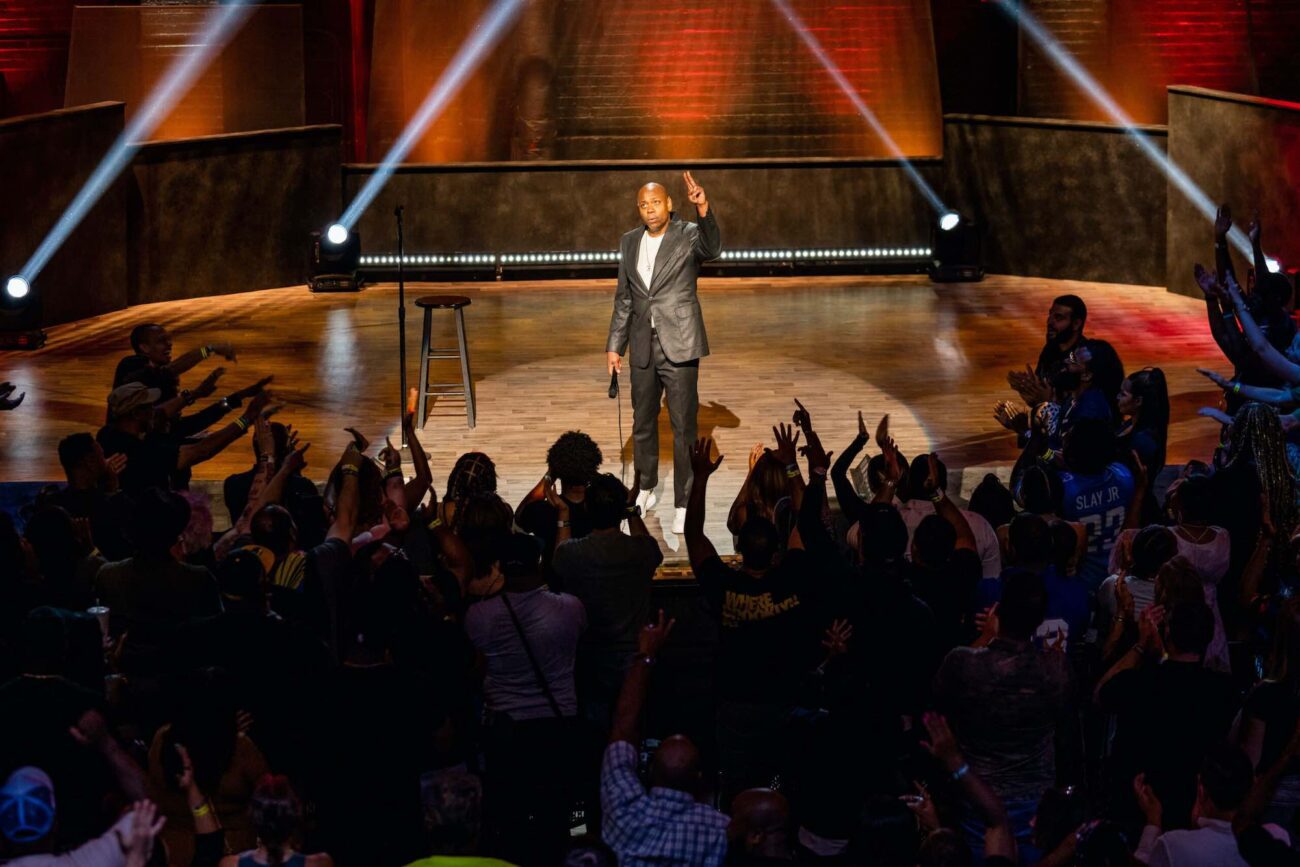 Why should you boycott Netflix after Dave Chappelle’s return?

Dave Chappelle has a history of transphobic remarks, especially on his Netflix specials.  And it turns out his newest release, The Closer is no different. Oh dear. . .

So what did he say this time? What was the reaction to it? Let’s dive in and find out why you should boycott Netflix over this latest travesty. 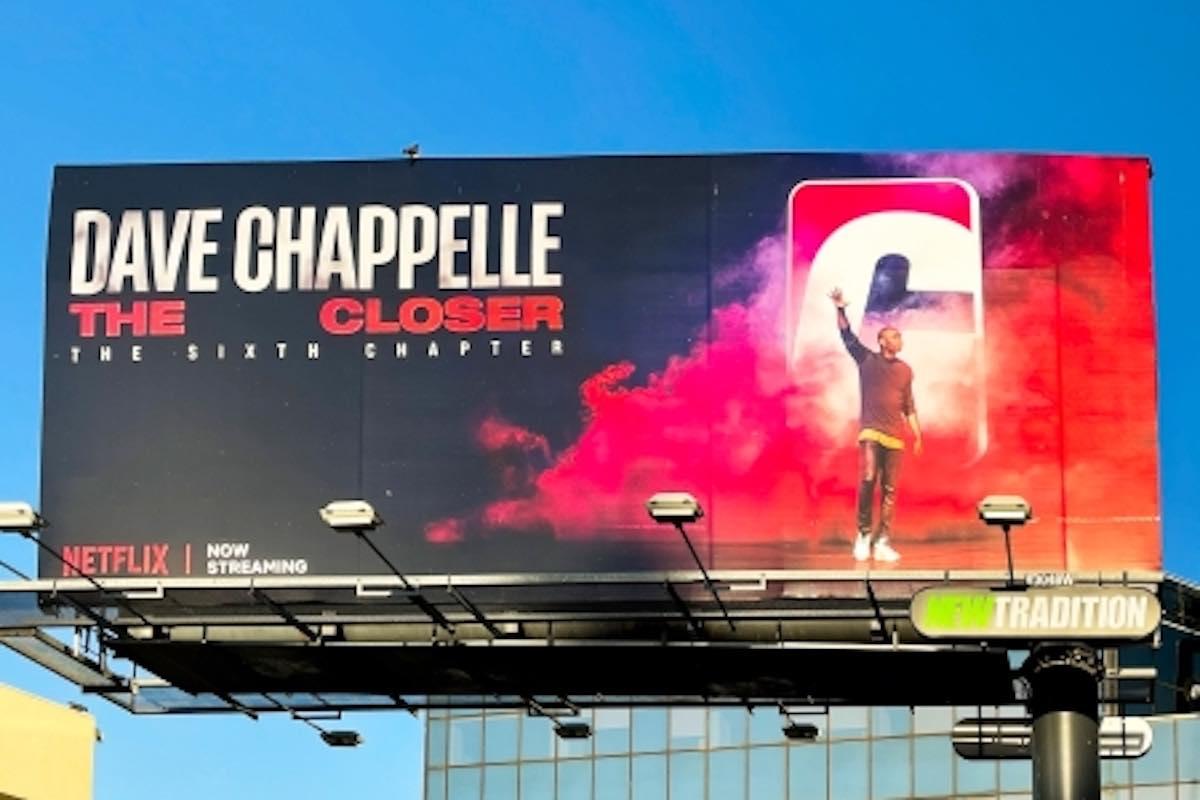 So what did Dave Chappelle do?

In this special, Chappelle spoke directly to “the LBGTQ community” to “negotiate the release of DaBaby,” a rapper who came under fire for homophobic comments. He said DaBaby “punched the LGBTQ community right in the AIDS,” and said, “in our country you can shoot and kill a n****r, but you better not hurt a gay person’s feelings.”

Dave Chappelle also said he wanted to discuss that “disparity,” and asked whether gay people can be racist, then said, “Look at Mike Pence! I’m guessing but I bet you he’s . . . sad gay.” It’s not unusual for people to think that those who hate gay people might be secretly gay themselves, but it is just as insulting as it’s ever been.

Chappelle said he’s “jealous of gay people” because of “how well that moment is going” and went on to tell several jokey stories about his encounters with LGBTQ people. However, that’s not even half of it. Then he goes on to tell the joke heard ‘round the world. Let’s get to Dave Chappelle’s infamous moment on Netflix. 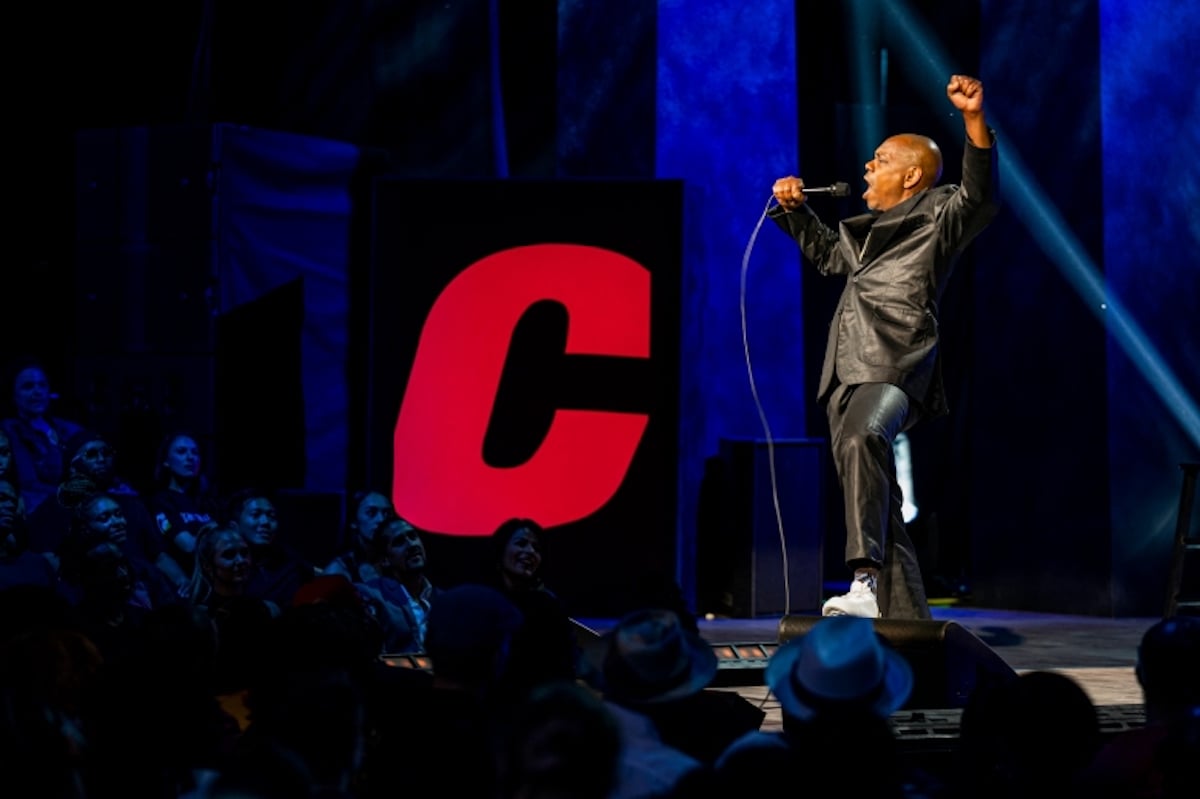 Dave Chappelle asked, “What is a woman? . . . Seems to be a question nowadays. Now listen, women get mad at me, gay people get mad at me. . . These transgenders. These n****rs want me dead.”

He went on make a transphobic remark, saying he searches the crowd for “knuckles & Adam’s apples” for angry transgender people. He said after that that he’s not “indifferent to the suffering” of the queer community, but his comedy on Netflix says otherwise. 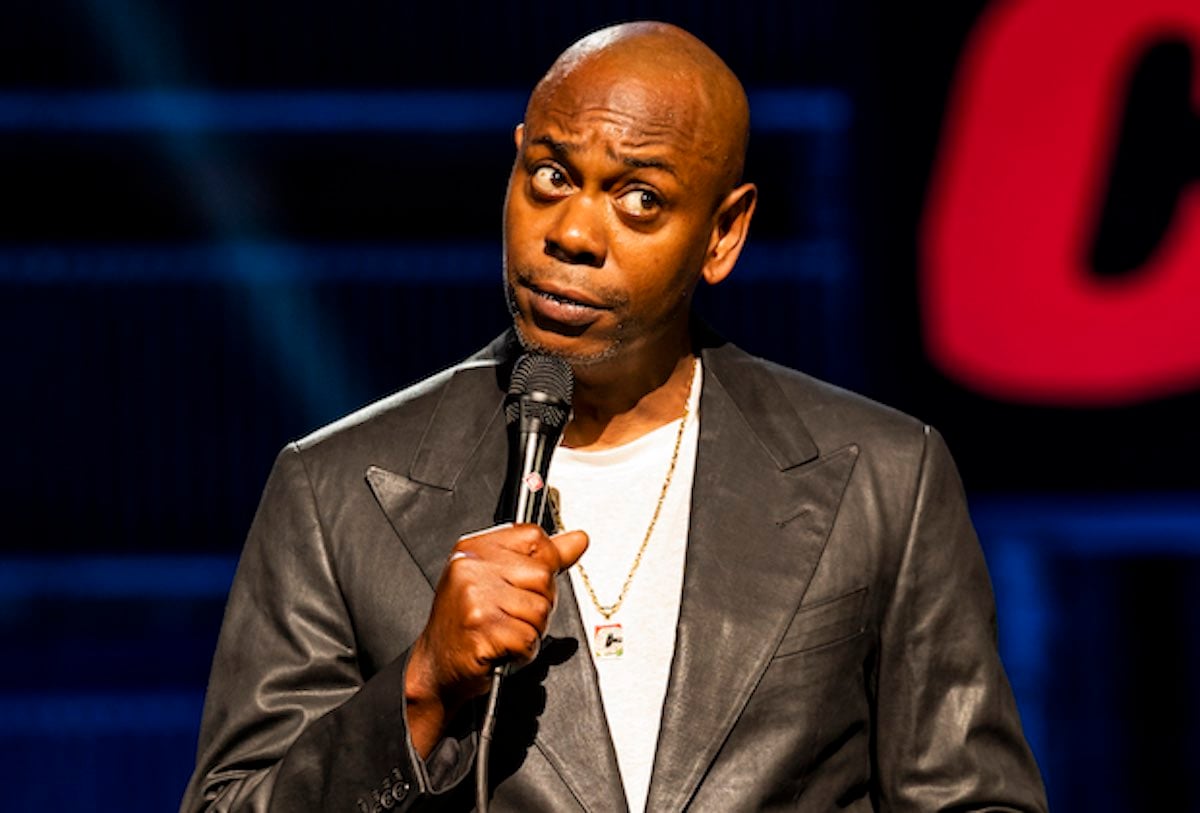 His most infamous bit from this special is about author JK Rowling. Chappelle went on about how the Trans-Exclusionary Radical Feminist (TERF) author was “cancelled . . . because she said ‘gender was a fact’.” He said that trans people make up words to win arguments because he didn’t know what TERF meant at first, but upon learning its meaning he exclaimed, “I’m on Team TERF!”

Finally, he compared changing your gender to changing your race, implying that it cannot be done, and stated repeatedly, “Gender is a fact.” And he went on to insult the genitalia of trans women who have had surgery, saying, “I’m not saying it’s not pussy, but it’s Beyond Pussy or Impossible Pussy. It tastes like pussy, but that’s not quite what it is, is it? That’s not blood. That’s beet juice.” Yikes. 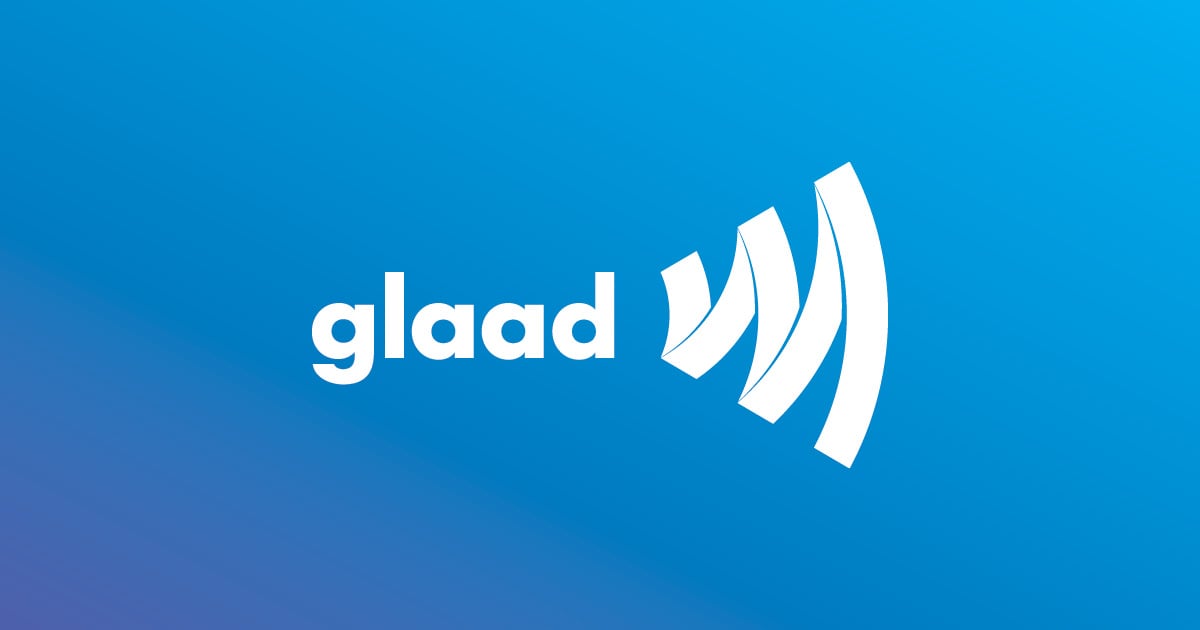 The response to Chappelle’s words was swift. The National Black Justice Coalition called for Netflix to remove the special. GLAAD did the same, and said the following on social media:

“Dave Chappelle’s brand has become synonymous with ridiculing trans people and other marginalized communities. Negative reviews and viewers loudly condemning his latest special is a message to the industry that audiences don’t support platforming anti-LGBTQ diatribes. We agree.”

Various trans folks on Twitter & other social media platforms called for a boycott of Netflix and the special. Those with Chappelle insisted they were overreacting over the special. We’re inclined to agree with the former group—transphobic is a serious problem, and normalizing it is not ok. 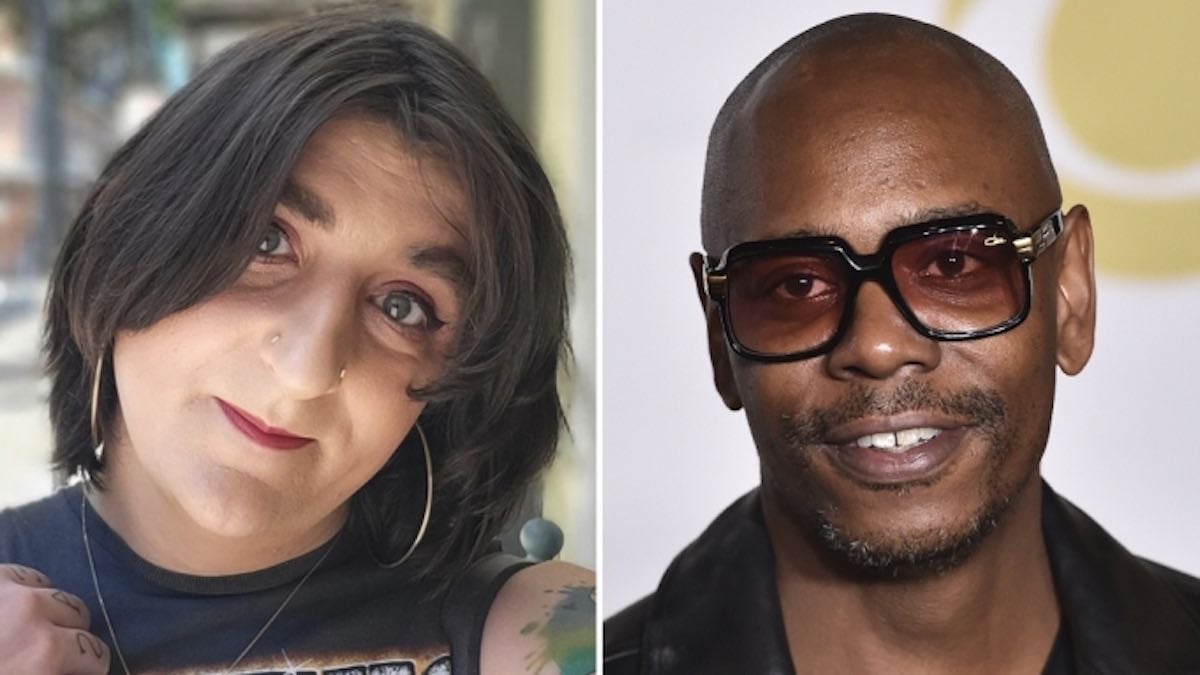 Dave Chappelle: The Closer released on October 5th, 2021. The day after the special was released, Jaclyn Moore said the following on social media: “I told the story of my transition for @netflix and @most’s Pride week. It’s a network that’s been my home on @DearWhitePeople. I’ve loved working there. I will not work with them as long as they continue to put out and profit from blatantly and dangerously transphobic content.”

She then stated, “I love so many of the people I’ve worked with at Netflix. Brilliant people and executives who have been collaborative and fought for important art… But I’ve been thrown against walls because, “I’m not a ‘real’ woman.” I’ve had beer bottles thrown at me. So, @Netflix, I’m done.”

Moore was interviewed by The Hollywood Reporter over her comments, and that really made things heat up. You see, Moore had been the showrunner for the Netflix show Dear Black People. People were offended to learn that (1) a white showrunner had run a black show, and (2) that a white person was calling for a boycott of a black man’s comedy. And so she got hateful comment after hateful comment. 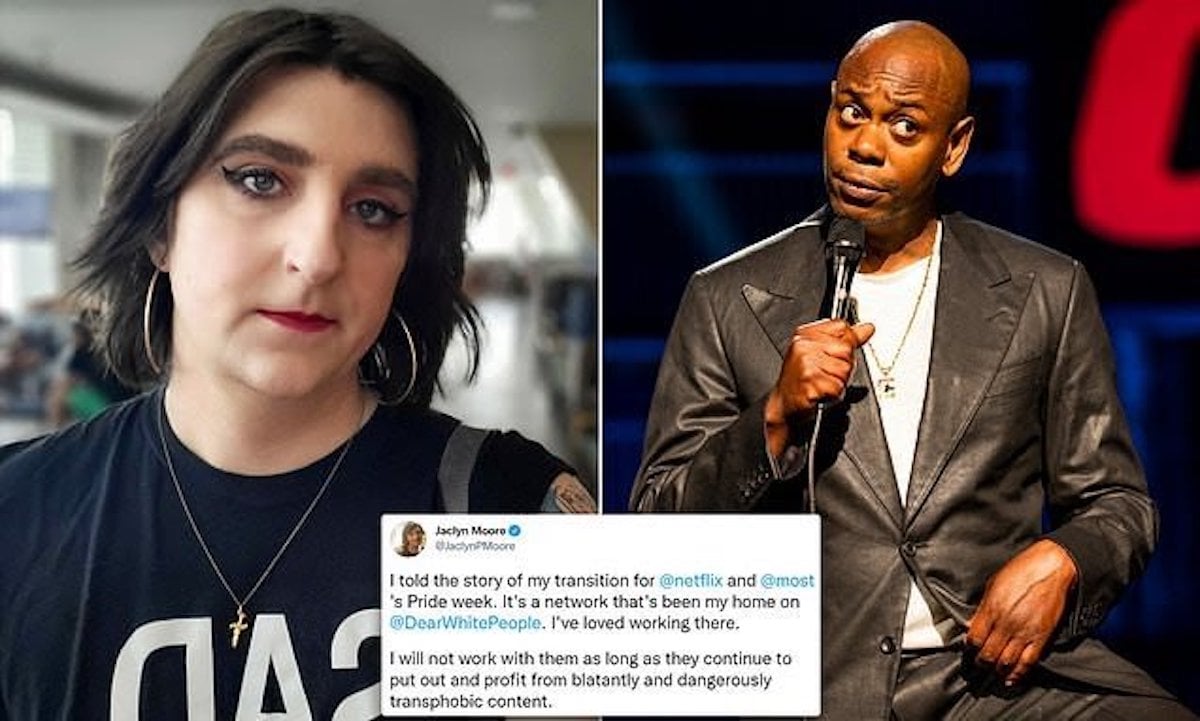 Moore later clarified on Twitter that, “I was hired to write on Dear White People by Justin Simien before season one. After season 3 I was promoted by Justin to run the show with him for season 4. I was the show’s only white writer.”

It’s a shame that Moore got so much transphobic hatred for speaking up, and that people oversimplified the issue as a white person angry at a black man. This is a complicated situation, and Moore deserved better.  Dave Chappelle was on Netflix, given a platform.  Jaclyn Moore was ridiculed for demanding accountability from them. 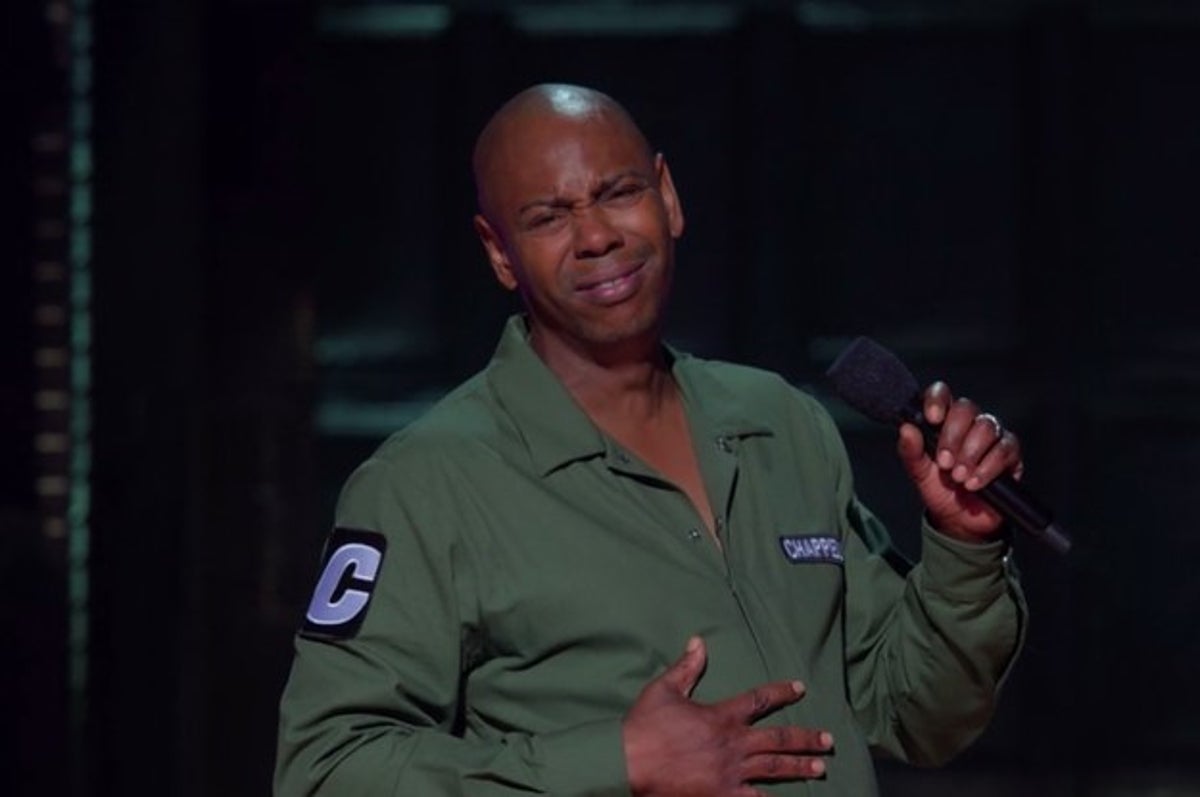 Where we’re at now

Dave Chappelle is doing fine. He had a standing ovation at his Untitled documentary, and said to his cheering fans, “If this is what being canceled is, I love it.”

Despite his transphobic comments, Dave Chappelle is still on Netflix. For shame.

Things aren’t great right now. And maybe you should boycott Netflix over Chappelle’s words—they are giving the man a platform, after all, and that certainly isn’t right. However, also consider speaking to the queer people in your life, and checking how they’re doing right now. Alternatively, donate to a queer charity in lieu of your Netflix subscription this month. They deserve it.

What are your thoughts on Dave Chappelle’s remarks on Netflix? Do you think he went too far? Comment and let us know!