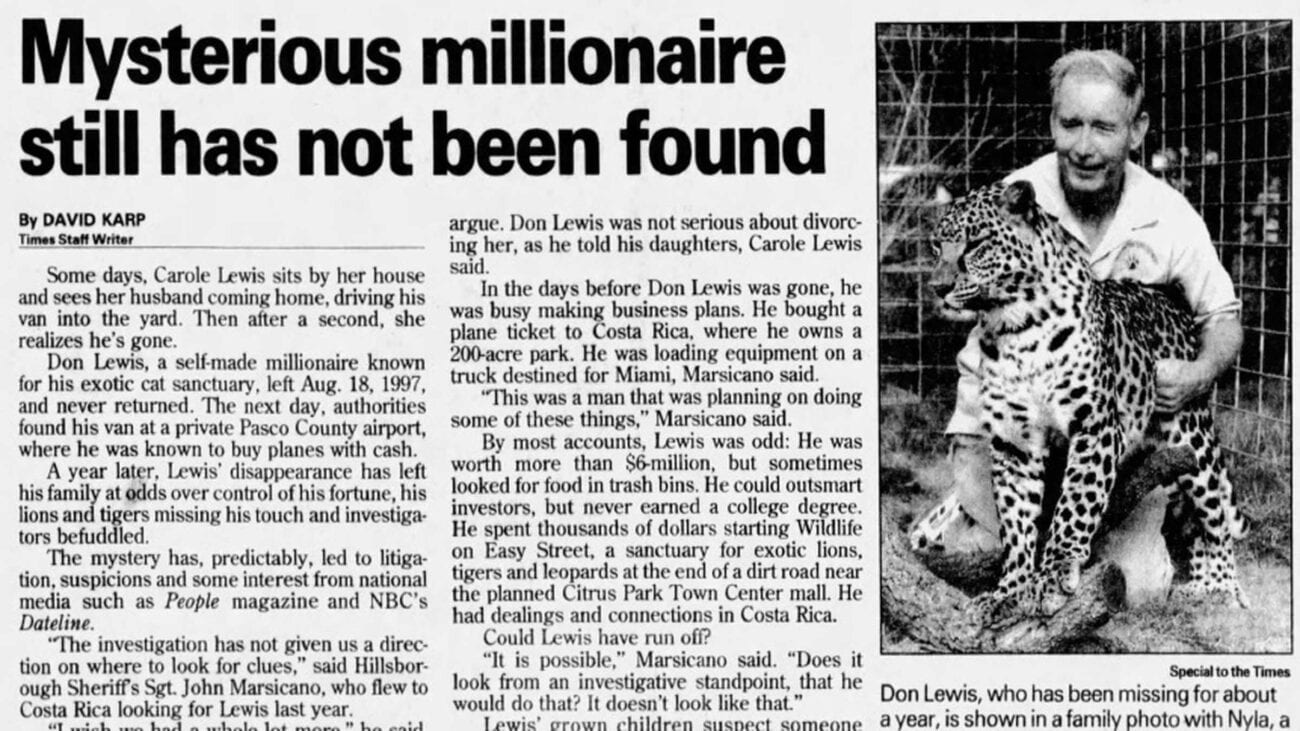 During this coronavirus quarantine, the one that people cannot stop talking about is the Netflix true-crime docuseries Tiger King. Tiger King follows the intertwined lines of those in the big cat community and a murder for hire plot that arose from Joe Exotic against Carole Baskin. Joe Exotic did commit the crime, but there was also another one as well.

Baskin’s second husband Don Lewis mysteriously disappeared in 1997. He or his body hasn’t been seen since. Exotic alleges that Baskin killed her husband and fed his body to her tigers. It’s a theory that most people have largely accepted. Baskin, however, spoke in her own defense and gave details about her marriage with Lewis.

It was, politely put, troubled to say the least. The way Baskin tells it, Lewis was pretty awful and abusive toward her. So here’s the brief background on Lewis’ case and what Baskin says went down during their marriage. 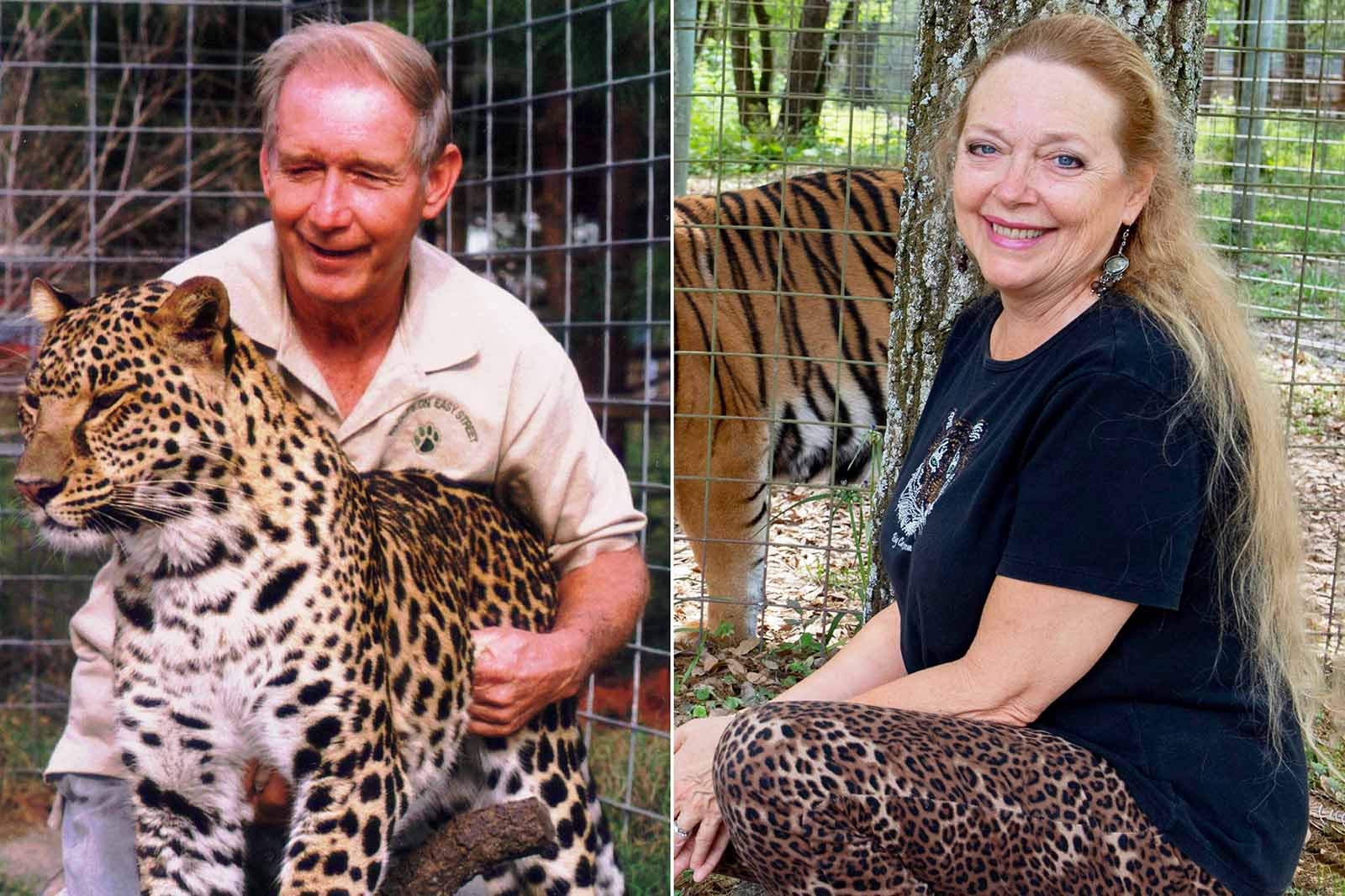 On August 18, 1997, Lewis left his home in Florida to go to Miami. From Miami, Lewis planned to fly to Costa Rica, where he was slowly moving his cash and assets over. Friends said that Lewis planned to move to Costa Rica. Baskin, however, didn’t hear from her husband and grew concerned so she filed a missing person’s report on Aug. 19.

Lewis’ vehicle was found at a nearby airport, but police couldn’t find anyone who saw him. Investigators went to Costa Rica, but Lewis did not turn up. Baskin hired a private investigator, who found nothing. Baskin and the Lewis children would get pretty acrimonious about Lewis’ disappearance.

Baskin refused to take a polygraph test, which the Lewis children found suspicious. It was Don Lewis’s eldest daughter Donna Pettis who suggested the fed him to the tigers theory, saying, “It’s a perfect scenario to dispose of someone.” Lewis was legally declared dead in 2002. Baskin inherited most of his estate. 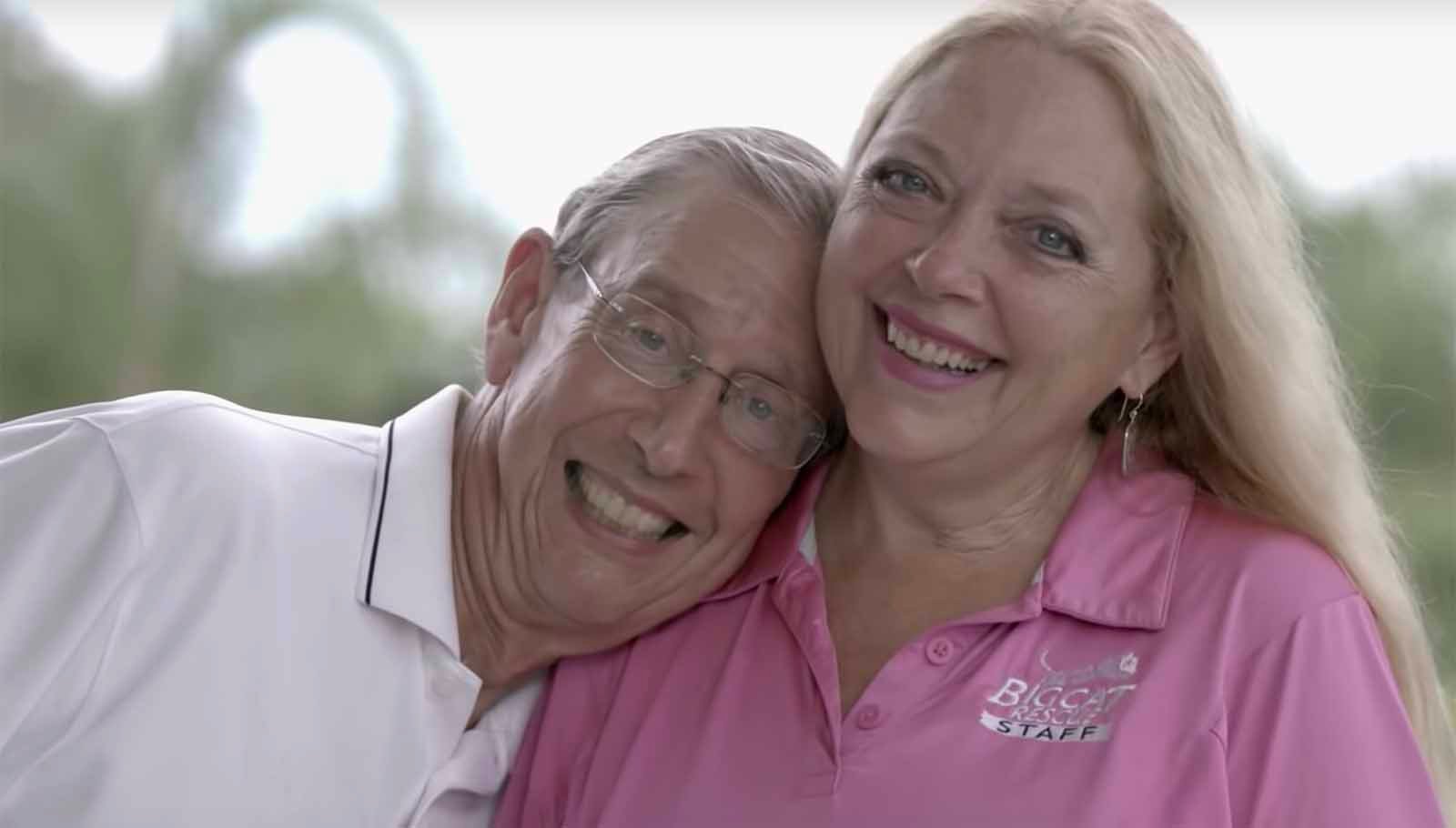 So what did Don Lewis do to Carole Baskin that was so awful?

Baskin penned an article on the Big Cat Rescue’s website which she titled “Refuting Tiger King” and got deep into details about her marriage with Lewis. She alleges that Lewis was a sex addict and that he would go to Costa Rica when she was menstruating.

“Don spent one week per month in Costa Rica. Don was a man who wanted to have sex daily. He would go to Costa Rica during the week I was having my menstrual cycle.”

As for the restraining order that Lewis took out against her before his disappearance, Baskin said that she would haul junk off the property while Lewis was away. Her account is that Lewis was told about this and wanted her to stop. 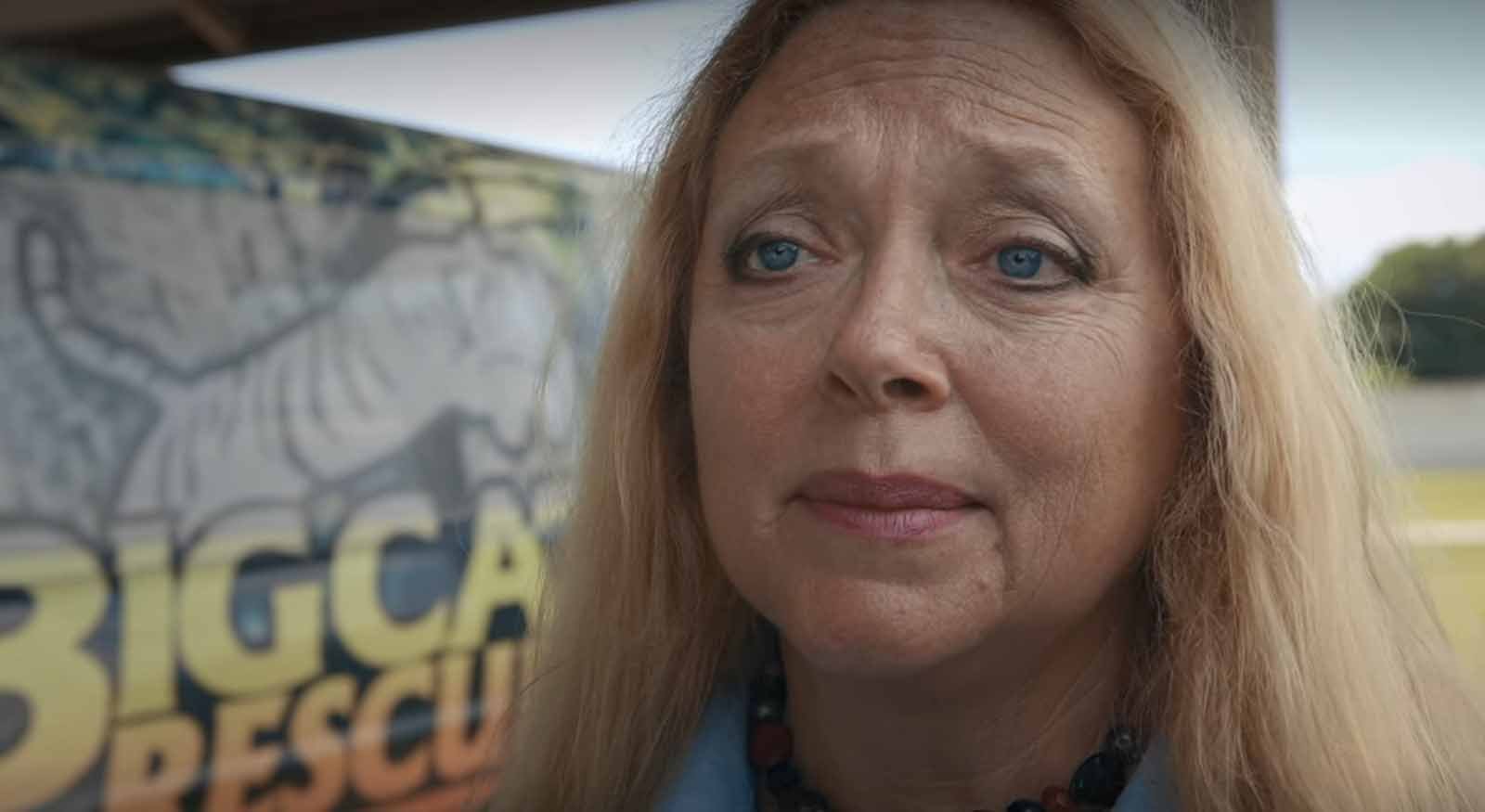 “Don tried calling the police to get them to stop me. They told him he would need a restraining order. It is unclear if it was Don’s idea that to get a restraining order he should say I threatened him or if someone like Wendell suggested that. Don filed for the order on June 20, 1997, and it was denied.”

Baskin is not a person of interest in the case, which is no longer being actively investigated. Though with interest thanks to Tiger King renewed, police are taking tips and new information. 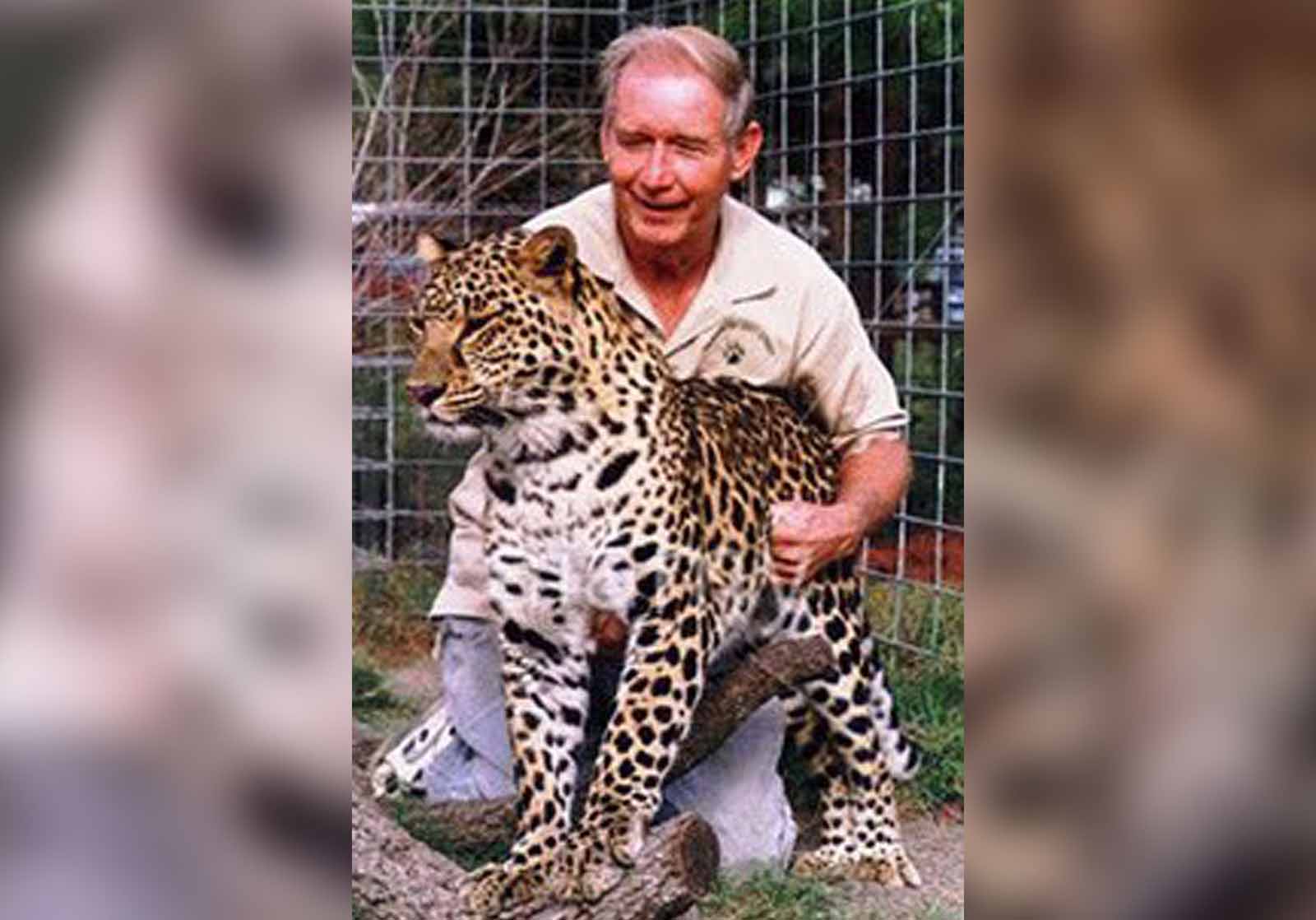 If Baskin didn’t kill Lewis, then who did? A former lawyer for Don Lewis said to PEOPLE that he heard that Lewis was strangled and tossed out of a plane over the Gulf of Mexico. He said to Nancy Grace on FOX Nation that he heard this from two sources. The motive for the crime? Money, of course.

“He never really hurt anybody. When he loaned money, it was at high-interest rates. He aggravated somebody on a land purchase once; that was bad. But nothing I would say was worthy of murder.”

Welcome to a case that’s weirdness only matches what went on in Tiger King.