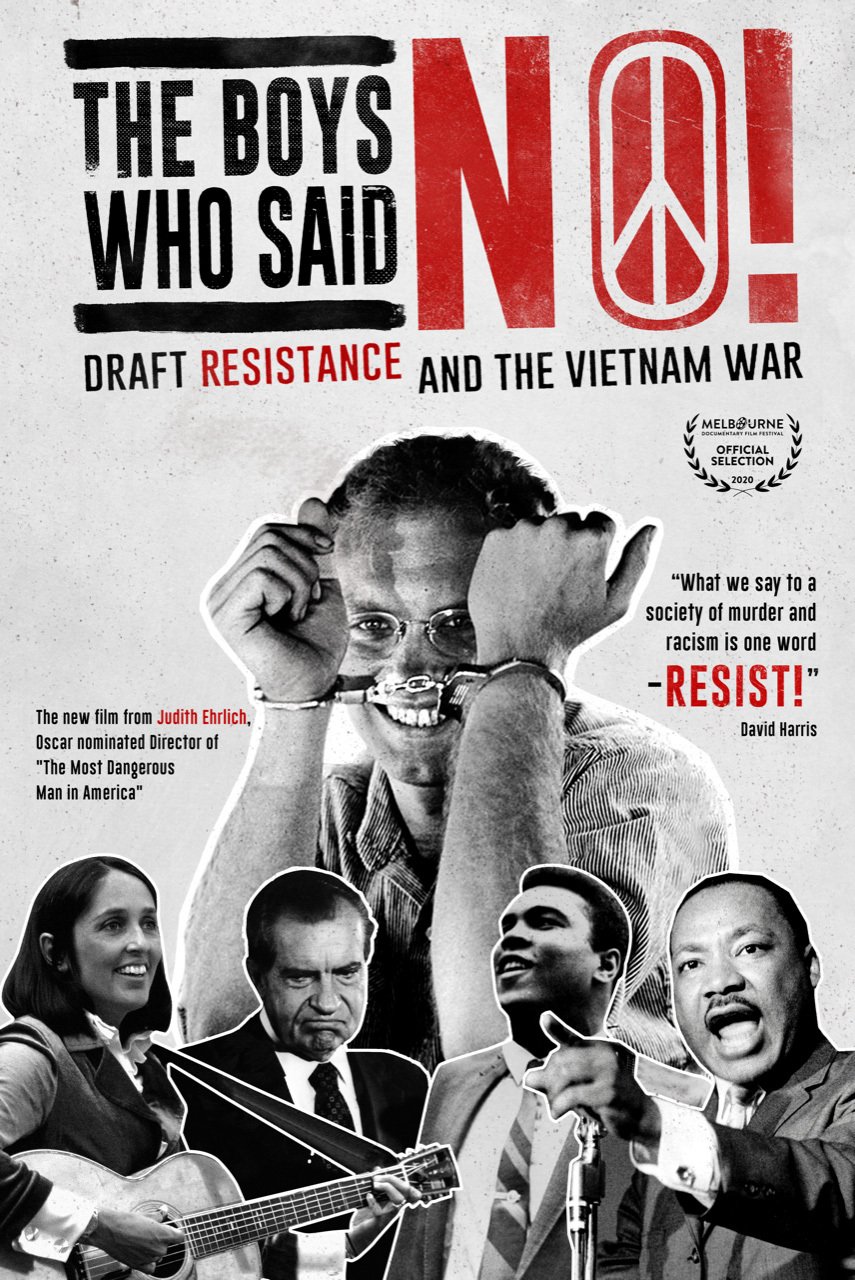 The Vietnam War is a subject director Judith Ehrlich is quite familiar with, as her Oscar and Emmy award-nominated documentary The Most Dangerous Man in America proved. But she’s taking it one step further, and covering the men on the ground during the war with her new film, The Boys Who Said NO!

The Melbourne festival ends on August 2, just a few days from now but the film will be screening online and in drive-ins in two US festivals in the Fall. Details to be announced in September.

Focused on the men protesting the Vietnam draft and even getting arrested for their beliefs, The Boys Who Said NO! gives Ehrlich a chance to show off the non-violent side of the war. She gets a chance to focus on the heroes in America against the least successful war in American history.

We spoke with Ehrlich about her work in documentary filmmaking and what inspired her to tell these boys stories in The Boys Who Said NO! 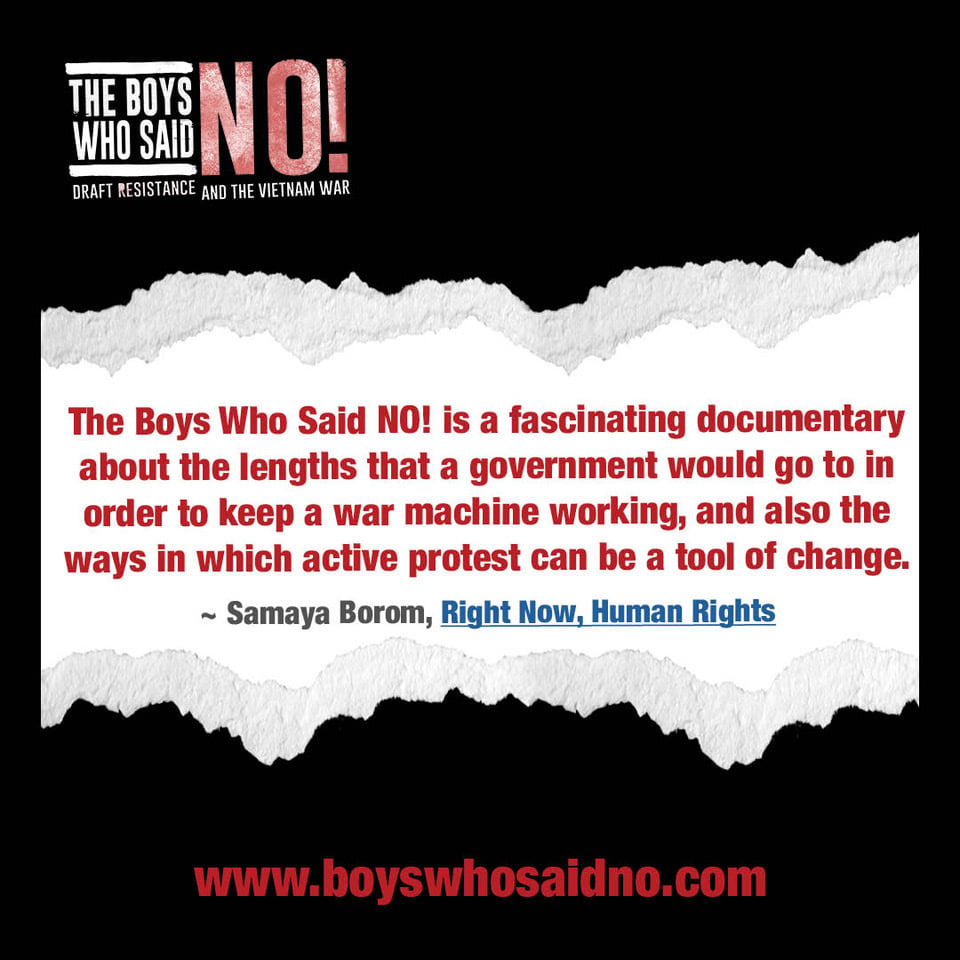 Tell us about your filmmaking journey. What did you do before you were a filmmaker?

I was a school principal, an educational coordinator for the 6 childcare centers at UC Berkeley-creating curriculum, training teachers and doing parent education. I became a photographer and public radio producer and that evolved into multi-media 24 projector slide shows in the 80’s, then video for non-profit organizations and eventually long form documentaries for public TV.

What movie inspired you to become a filmmaker?

In high school, my friend Gary Meyer- later co-director of Telluride Film Festival, screened independent/foreign films in the barn at his family home in Napa, CA where we both grew up.

I joined the film club and never looked back. I saw my first Fellini and Kurosawa films and Satyajit Ray’s Pather Pancheli and didn’t imagine I would actually make films but knew I was extremely happy in a dark room with others watching images and hearing stories that have enriched my life. 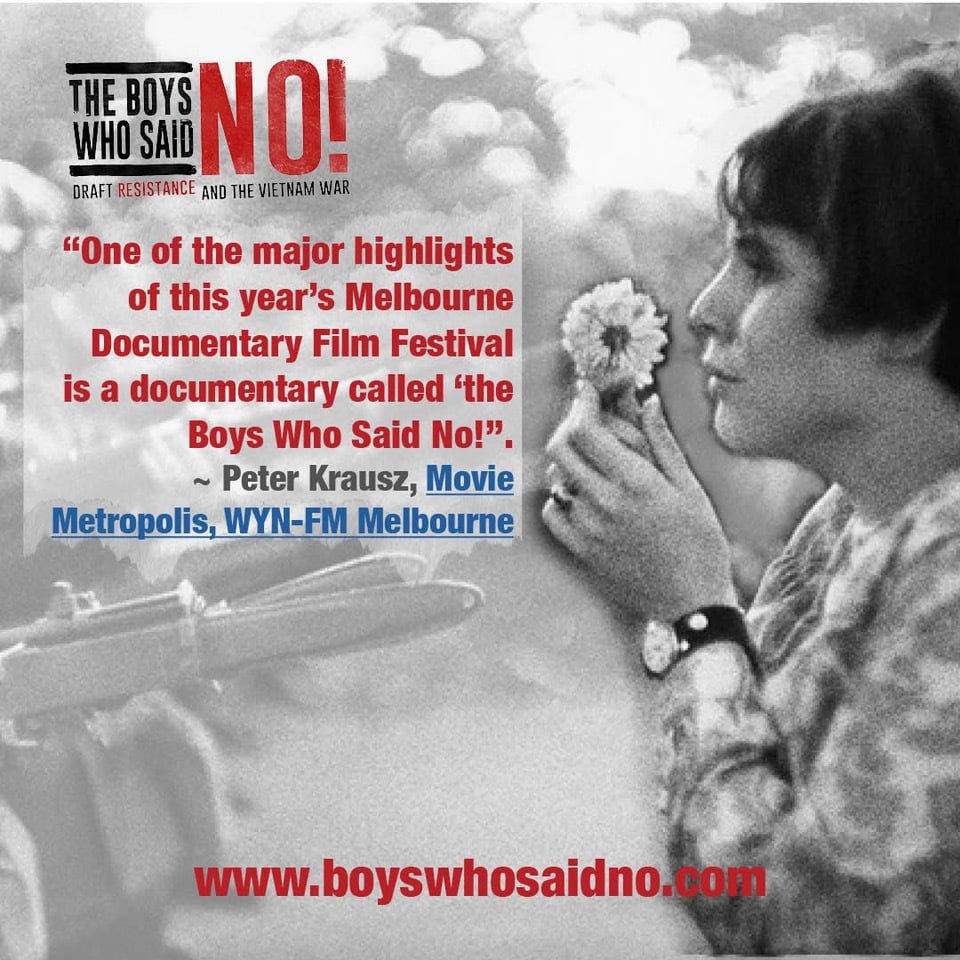 Why did you choose to focus on documentaries?

I was never tempted to make narrative films.  I am very nosy.  The stories of real people as they tell them are what captured my attention as well as a fascination with digging through archival footage to construct a story from the past.

What inspired you to create The Boys Who Said NO!?

It is the third in a triptych on the power of non-violence.

Did you have any experience covering the Vietnam War before you created The Boys Who Said NO!?

My Oscar and Emmy nominated film, The Most Dangerous Man in America: Daniel Ellsberg and the Pentagon Papers told the story of the whistleblower who revealed the American government’s systematic cover-up of the truth of the Vietnam War . . . that it was unwinnable from day one. 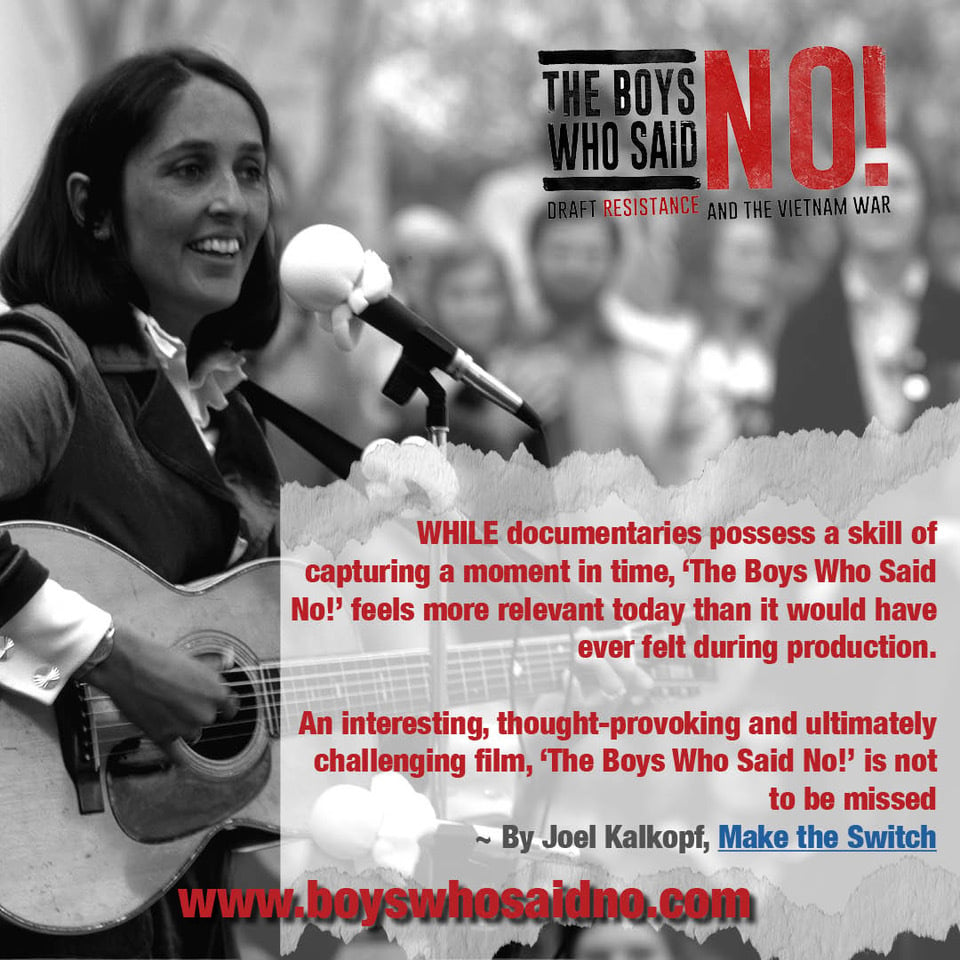 Do you feel Americans remember the Vietnam War correctly? Why?

The split created by the Vietnam War has never been fully healed. People who need to believe it was a holy cause, do so to this day. Those who believe, as I do, that it was a vicious, cruel and asymmetrical attack on a peasant population, remember it that way.

While making The Boys Who Said NO!, you wore a lot of different hats. What was that experience like?

Exhausting and exhilarating, depending on the day.

You can’t wear all the hats.  Making a documentary is all about working with a team.  I had a fabulous group of experts including several war resisters working alongside me in the US. In Australia, I had the very talented editor Scott Walton and Paul Butler from 50/50 in Brisbane steering the post-production.

Why do you think documentaries are important?

As a free press becomes largely a myth destroyed by the Rupert Murdock’s of the world, documentaries have stepped in to fill the gap of deeply researched stories that take time and serious effort. 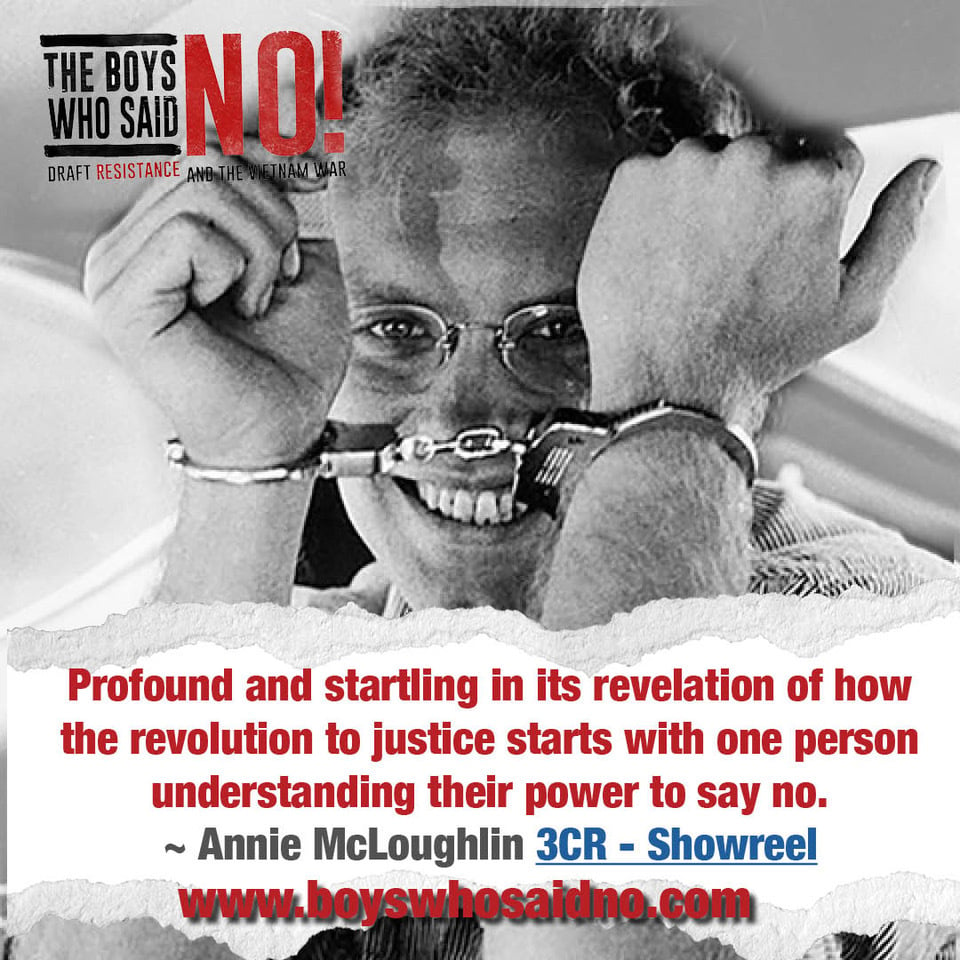 Do you feel like The Boys Who Said NO! changed the conversation about the Vietnam War and the war draft in general?

“The Resistance” movement was the vanguard of the non-violent wing of the anti-war mass movement. The ability of a ragtag army of young people who refused to kill and who systematically set out to stop the court system from working by overloading the caseload and filling the courtrooms with supporters.

Tens of thousands were indicted, 4,000 served hard time in prison for their commitment to nonviolence in the face of a brutal war and an un-equitable draft system.

What do you hope people take away from The Boys Who Said NO!?

That each of us have the power to say NO! to violence and injustice and if we do so loudly, clearly and with others we can actually change the course of history.

It is happening on the streets of the US and Australia right now and I hope this film gives those in the struggle a playbook for how to build a successful campaign of nonviolent resistance. 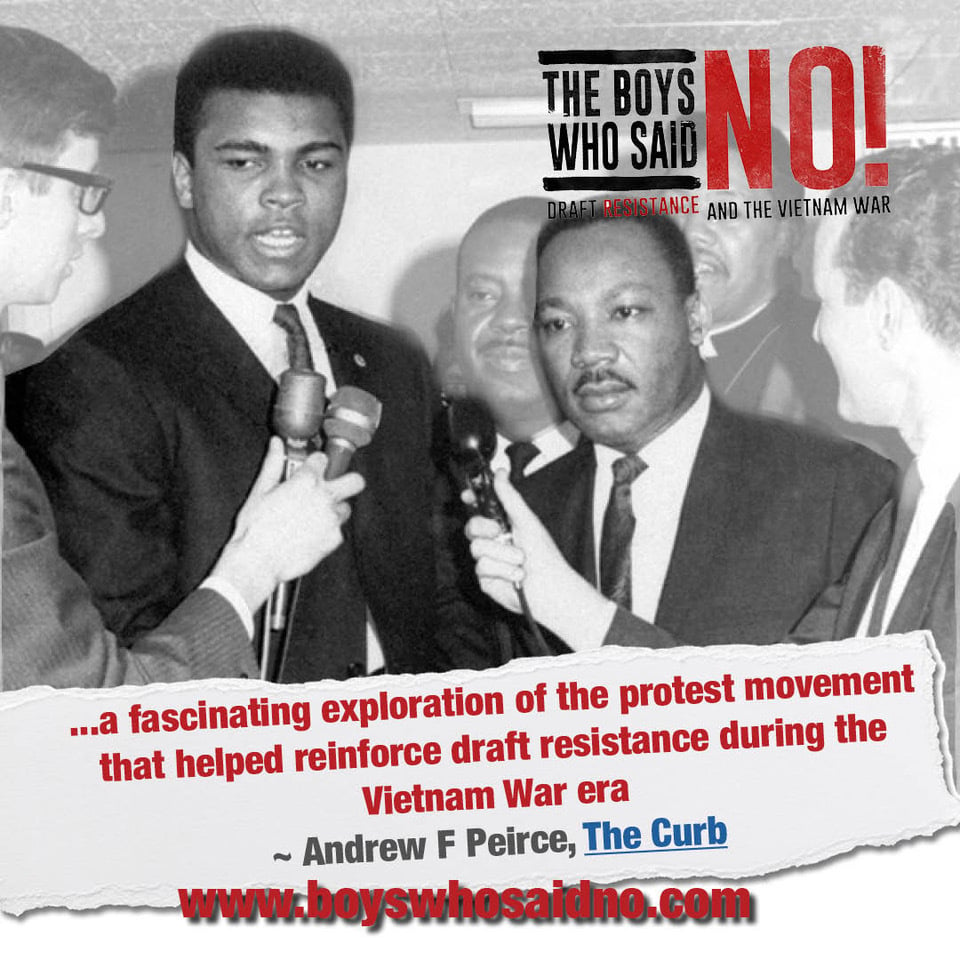 Do you believe documentary filmmakers have an obligation to tell stories that positively change the conversation of their topics? Why or why not?

What would be your dream documentary topic?

The last three films have been my dream documentary topics.. about courageous people who refused to kill. I spent a year plus working on a film on Mr. Rogers and was shoved aside by the VP of PBS- US public broadcast- who made a bad version of the story. 10 years later a wonderful version of that story was made.

I hope to have that film out in theaters which we are able to attend again and yes, swimming in the sea. 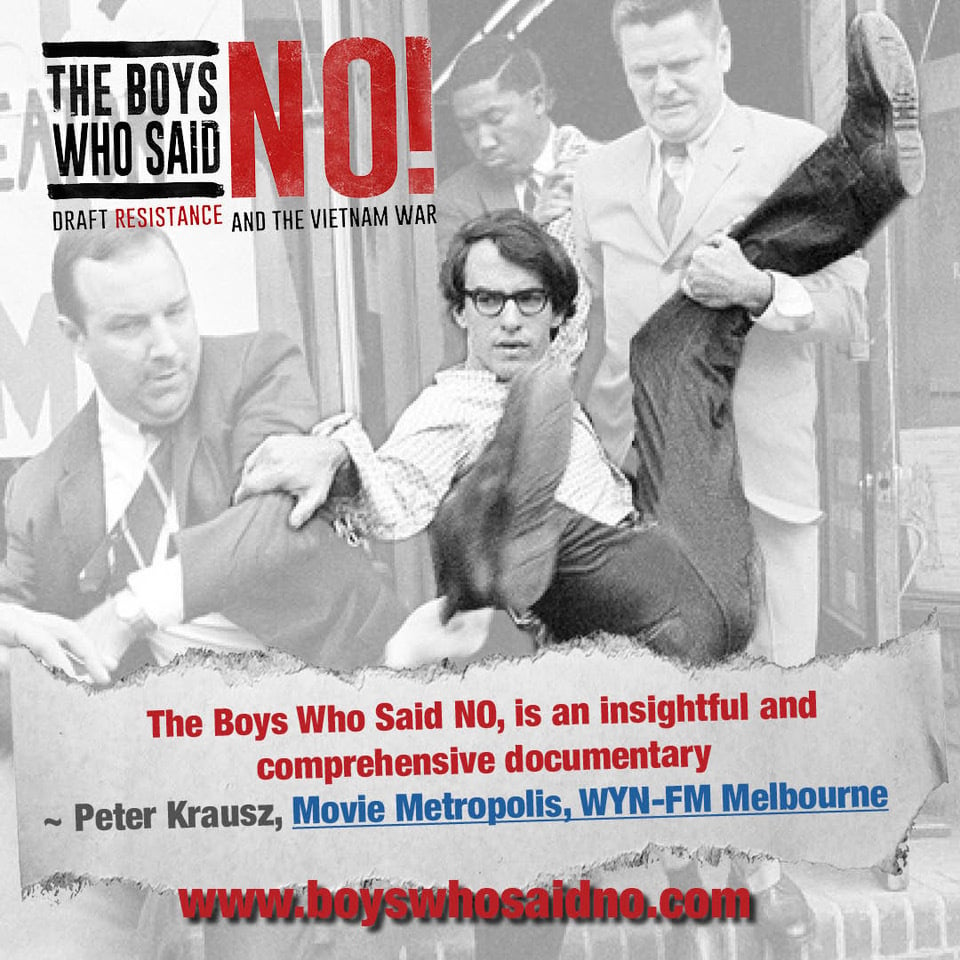 Do you have any indie filmmakers we should be keeping an eye out for?

So many great filmmakers out there.  I am a member of Film Fatale in San Francisco and toying with the idea of starting a chapter in Brisbane. The organization is made up of the old guard, like myself and up and coming younger women who are making great work. We are learning from and supporting one another in an inspiring and organic way.

Obviously the time has come for women of color to step into the center stage.  There are many already doing so. Several Berkeley comrades come to mind, Dawn Porter is one, Stanley Nelson and his company, who were based in Berkeley have done a great job nurturing new African American talent.

It took me a very long time to get the nerve to watch Joshua Oppenheimer’s The Act of Killing and The Look of Silence, but they are stunning retooling of the documentary genre. Whatever he does next should be worth watching.

What’s your favorite documentary of all time, and why?

Man on Wire, Sugarman, Amy, Burden of Dreams, Fog of War, Freedom on My Mind, Nostalgia for the Light

I wish I could say – on the beach at North Stradbroke Island/Minjerrabah reading a fabulous novel, but actually I am already deeply involved in another film project which I started some years ago and now have a great team to work with to complete the project.

It’s called The Mouse that Roared and tells the story of a remarkable Icelandic poetician/Iceland’s Pirate party founder, a warrior for digital free speech who produced the “Collatoral Murder” video that put Julian Assange and Wikileaks on the map.

Birgitta Jonsdottir is a single mom, Bjork played in her mother’s famed band, she is a Buddhist/anarchist and a geek hacker and troublemaker of impressive proportions fighting for free speech in the digital space.

I’ve been following her for 8 years- since Daniel Ellsberg took me to meet Julian Assange so I could make a film about him like the one I made about Dan. Soon after I met Birgitta in Reykjavik and felt the story of whistleblowers of the cyberworld could be told more sympathetically with Birgitta in the center of the story.

Abbey Disney, she combines ethics and filmmaking with powerful storytelling. Or Werner Hertzog. Just to listen to his voice? Or Patricio Guzman, stylistically. But really I wouldn’t want to be the subject of any film. I prefer to be on the other side of the lens and asking the questions rather than doing this, answering them.