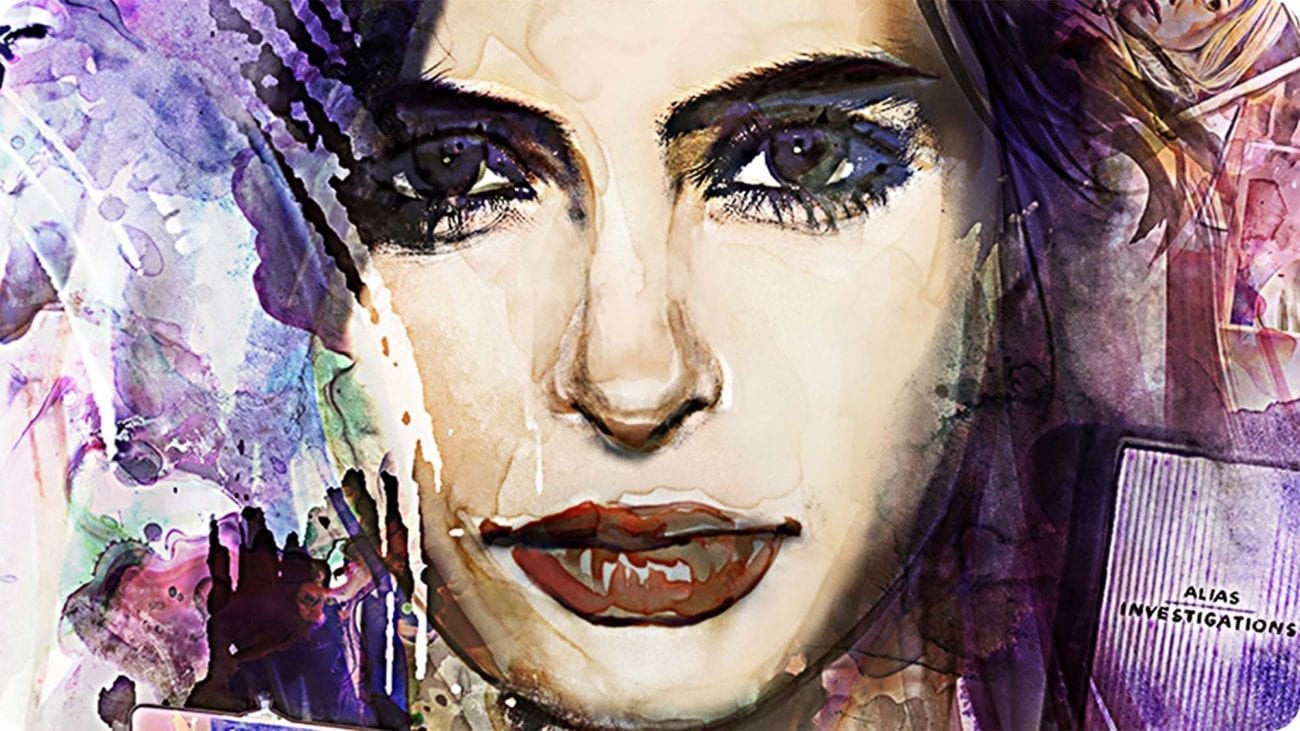 Jessica Jones wraps up with its third and final season today in the great Netflix Marvel cull along with Daredevil, Luke Cage, Iron Fist, The Defenders, and The Punisher, perhaps essential viewing for Marvel fans and cynics alike, despite disappointing many with weak followup seasons.

When not avoiding capture from her manipulative abuser, Kilgrave – a magnificent, villainous turn from David Tennant (Bad Samaritan) – she became one of television’s favorite booze hounds. Usually found drinking a bottle of whiskey a day – a habit we can’t discourage enough – Jessica ranks high among our favorite addicts we can’t help but love despite their bad decisions.

“To alcohol: the cause of, and solution to, all of life’s problems.” We hate to admit it, but Homer’s kind of right. The iconic cartoon character frequently uses his shifts at the Springfield Nuclear Power Plant to sleep off a hangover, but considering he’s also been a boxer, plow driver, musician’s manager, and even an astronaut, we’d say he’s a pretty functioning alcoholic. Just make sure the fridge is stocked with Duff.

Essentially the equivalent of Homer Simpson if he went just a step or two over the edge. Two characters from the same show is cheating a little, but we’d be remiss not to mention Barney’s slurred voice and disgusting belch.

Jack Nicholson’s frightening performance of the alcoholic, abusive father made Stanley Kubrick’s esoteric adaptation of Stephen King’s seminal text, The Shining, captivating and thrilling. Booze had already driven him to become an abusive husband and father, and it certainly didn’t help when he crossed the threshold of a haunted hotel.

The cast of It’s Always Sunny in Philadelphia

Practically everyone we meet in the boundary-pushing sitcom can’t get by without a few drinks each day, and the fact that they own a pretty well-stocked bar surely doesn’t help. Known for occasionally dabbling with their own alcoholic inventions, Fight Milk and Riot Juice are two of their most questionable cocktails of vodka mixed with milk & eggs or blue energy drink.

A far more contested issue on the pages of Marvel comics than on the screen, Robert Downey Jr.’s Iron Man still loved an occasional drink or six, and Iron Man 2 briefly touched on his famous comic-book infliction. Claiming it eased the pain of his palladium poisoning caused by a futuristic pacemaker, Stark decided enough was enough when he destroyed his house in a drunken rage that ended with a robot brawl with his best friend, Rhodey.

The drunken, abusive husband of Judy Garland’s Esther Blodgett who catapults her to stardom in the 1954 musical version of A Star is Born. The result of a dangerous combination of addiction and power, Maine is all delight and charm before he eventually becomes the villain of the piece.

One of several adaptations of the story, the film is due yet another remake starring Bradley Cooper (Silver Linings Playbook) & Lady Gaga (American Horror Story) – drink up.

Despite his short stature, Tyrion (Peter Dinklage) can hold his drink better than anyone else in Game of Thrones. Featuring a cast of alcoholics, including a king who drank himself to death, Tyrion is somehow the most high-functioning of them all.

One of the most cynical and intelligent characters in Westeros, Tyrion is still never taken seriously, constantly referred to as “The Imp” or “Halfling”. We can’t blame him for drowning his sorrows in Dornish wine.

Mad Men took its time with Don Draper’s descent into alcoholism. Seen almost constantly drinking, Jon Hamm’s Draper didn’t get genuinely hammered until season four, after which he was shown drunk in practically every other episode. By the seventh season after several drunken incidents, his contract includes a sobriety clause, which he quickly breaks.

A real-life example, Spielberg’s modern classic accurately portrays the less favorable characteristics of German war hero Oskar Schindler, played wonderfully by Liam Neeson, also a well-known womanizer and alcoholic. Schindler managed to save over a thousand Jews from death in Nazi prison camps. A high-functioning shikker, he’ll certainly go down as one of cinema’s, and history’s, best.

Remember when Disney films weren’t afraid of hilarious subjects like alcoholism and smoking? The bumbling Dionysus from Fantasia certainly deserves a shoutout, but he doesn’t come close to the boozy antics of Sleeping Beauty.

Constantly guzzling a huge jar of red wine, the jester of King Stephen’s court gains an advantage over other medieval comedians with his fondness for a good stiff drink – and probably didn’t need a magical curse for him to crash for days on end.

Somehow the world’s greatest spy manages to be a top-secret agent while having the drinking habits of an average student. Starting off the day with a Bloody Mary at breakfast before moving on to Melon Balls and Old Buncombe, Archer claims if he doesn’t stop drinking, the resulting hangover from years of sustained drunkenness would kill him.