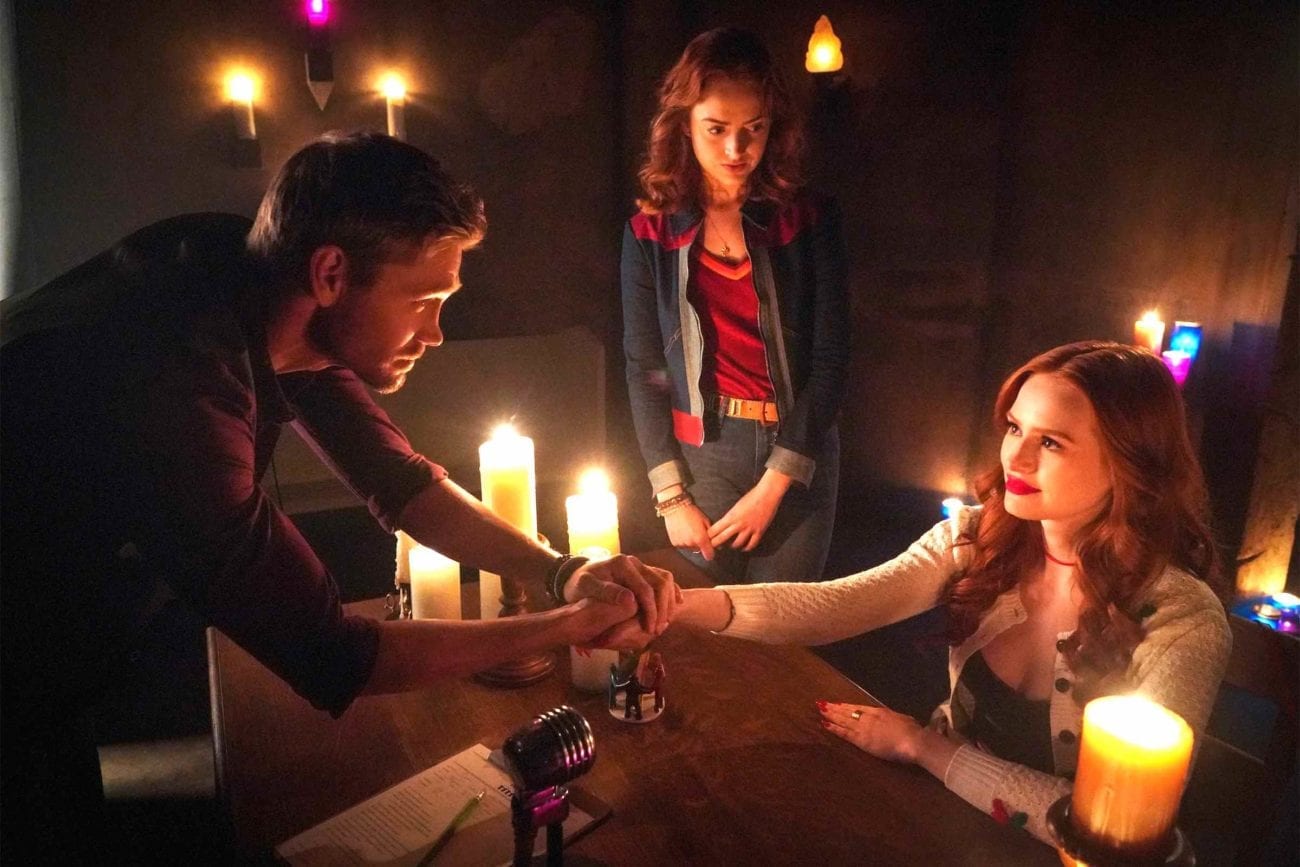 Edgar Evernever: Who is the charismatic ‘Riverdale’ cult leader?

At the end of the jaw-dropping Riverdale season 2 finale, we were left with the sight of the Cooper family reeling from the discovery that Hal (Lochlyn Munro) is the Black Hood. Betty (Lili Reinhart) is shaken to her very core by the news and Alice (Mädchen Amick) is an absolute mess.

However, estranged daughter Polly (Tiera Skovbye) shows up to let her mom know that there’s a man at the (totally not a cult) farm she’s been staying at who can “help her”.

Having seemingly not learned a goddamn lesson about trusting the wrong people, Alice sweetly accepts her daughter’s help while Polly takes a smug, scheming sip of her hot tea in the manner of a woman who is totally part of a psycho cult. 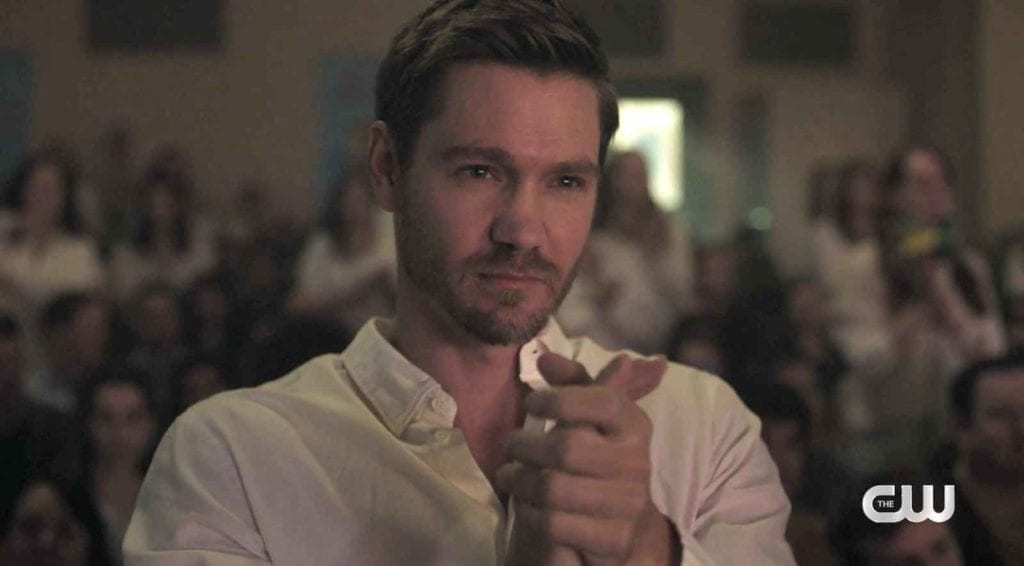 It took nearly ¾ of the final season for us to meet the charismatic cult leader in all his glory. Chad Michael Murray perfectly embodies the role, and apparently did a ton of preparation & research before he donned the white robes of the ominous cult, The Farm. Edgar Evernever is proving to be one of the biggest baddies of Riverdale season three.

Apparently Murray studied the most infamous cult crimes from pop culture history to study for his role. Even though it’s slightly jarring to see a 39-year-old portray the father of a teenager, we’ll let that slide because his performance is just the creepiest, condescending best. 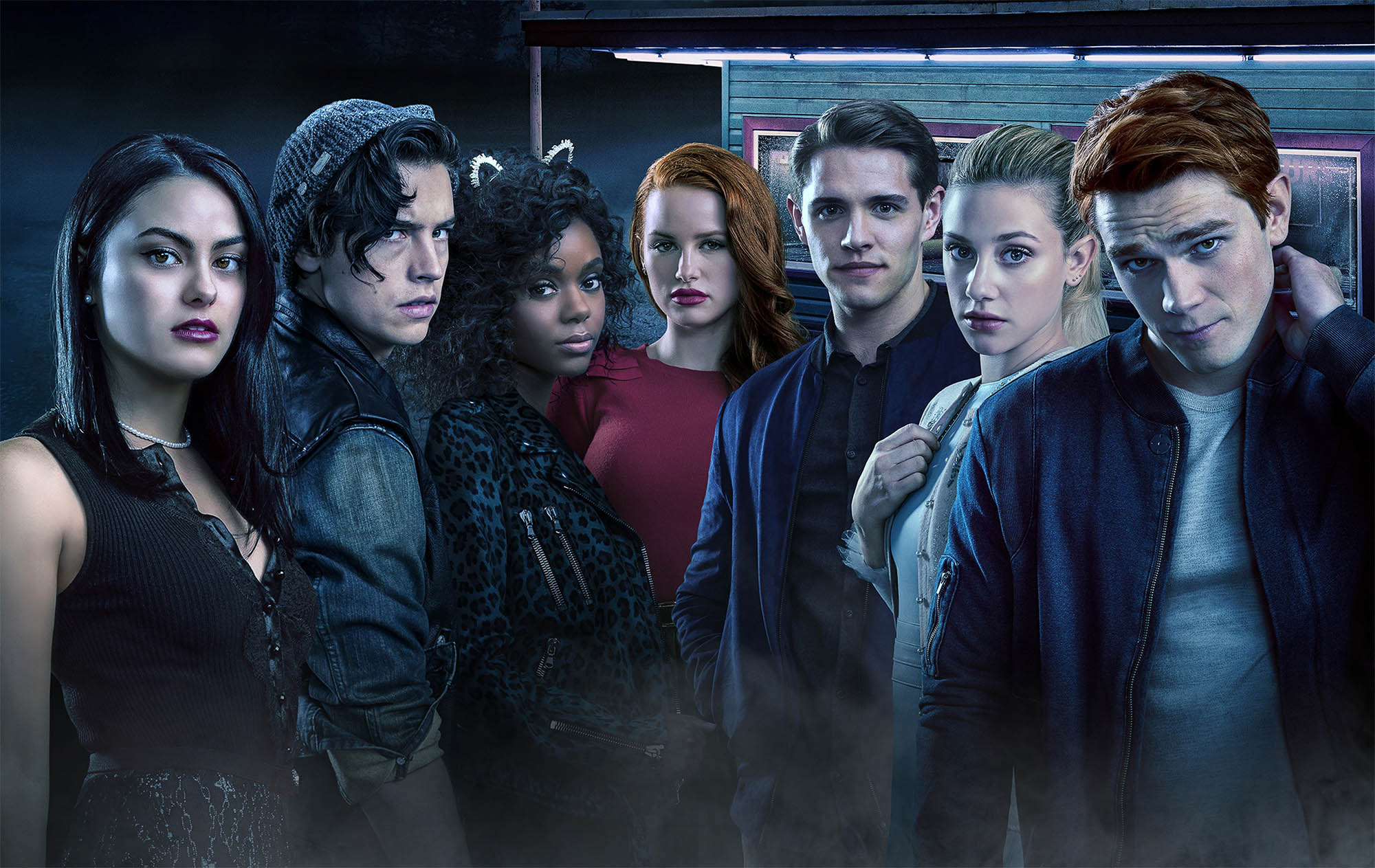 Back in 2018 in a casting call spotted by That Hashtag Show, we saw Riverdale would be introducing “the man” Polly told her mom about – and the description was a doozy. Listed for the appropriately insanely named Edgar Evernever, the casting call read:

“Male, Late 30’s – Early 40’s, Open Ethnicity. A recent arrival in Riverdale with his daughter Evelyn, Edgar is a new-age health “guru” who has helped Alice get her life together after the events of Season Two. He’s attractive, in a neighborly way, and charismatic – a wise, comforting presence. (An actor with 90s-oos pop-culture cachet is a plus.) MAJOR RECURRING GUEST STAR.”

So naturally, we thought it’d be fun to think about which actors “with 90s-00s pop-culture cachet” would have been perfect for the role. Here are eight dudes whom we would have loved to see in the role too.

The former star of The O.C. currently has an open slate for acting roles and we honestly can’t get enough of him. He’s wholesome and charismatic enough for the role and could carry the dark yet campy tone of the show perfectly. Plus, considering the character sounds shady AF, we reckon Brody could do a great job of harboring some nasty secrets and a hidden agenda just like he did as satanic rock star Nikolai in Jennifer’s Body.

Having appeared in such iconic 90s and 00s hits as Clueless and Scrubs, Faison has exactly the sort of “90s-oos pop-culture cachet” that the casting call asked for and he’s also the most neighborly, charismatic actor of that time we can think of. It’s easy to imagine the entire town of Riverdale being drawn by Evernever’s charisma if it were coming from Faison.

The early-00s teen star has enjoyed small roles here and there for the past decade or so since his heyday and we think he’d make a great addition to the town. He could definitely lend the “comforting presence” required for the role, as witnessed when he played a kid trying to save his friends from the near-literal embodiment of death in Final Destination.

Last seen as corporate head Chase Graves in iZombie (and quite literally losing his head by the finale), Dohring is perhaps best known for playing the preposterously charismatic (but troubled) Logan Echolls in Veronica Mars. Thanks to those insane abs he’s rocking these days, he’s believable as a new-age health guru, but for whatever reason, it’s also easy to imagine the actor depicting a man who may be the head of a potentially insidious cult – one that we’d happily join if he asked us.

Having just finished starring in the long-running police procedural show Bones and more recently in SEAL Team, the Buffy the Vampire Slayer star looks like he may be available for such a role. In his older years he’s still just as attractive as ever, but he’s looking quite neighborly and wise. Plus, we can easily see him and Amick getting on like a house on fire.

In the Veronica Mars movie, Capra proved he’s got what it takes to play a wise, caring family man when he gave us a glimpse of Eli “Weevil” Navarro looking older and wiser and swapping his biker days for babies. His tattooed look would lend itself well to a man who deals in new-age health and we’d also get such a kick from seeing Alice Cooper hooking up with another biker-styled character (even if he isn’t one). 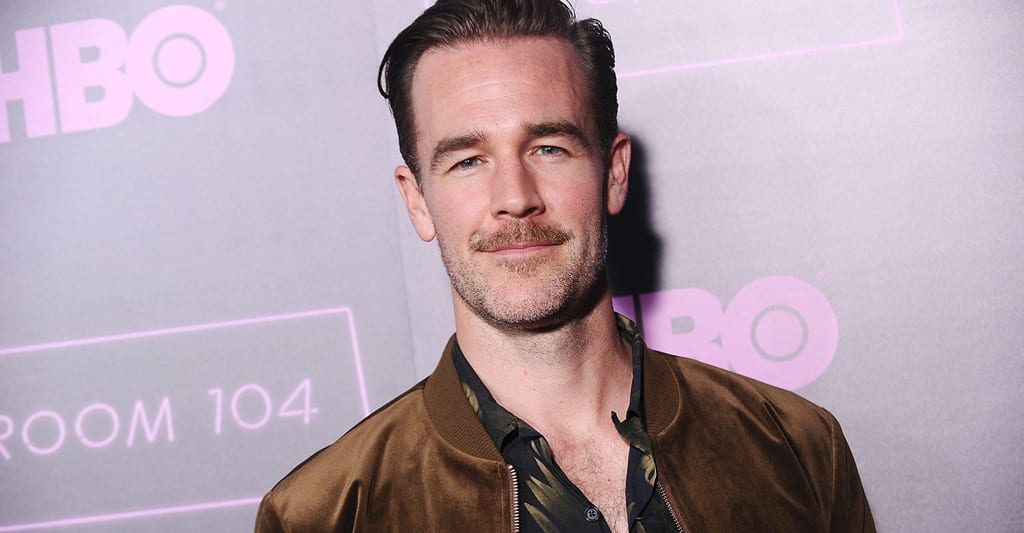 The Beek from the Creek is currently killing it as a proto-Trumpian nightmare in Pose, but his role isn’t too major that he can’t also handle this one too. The actor is charismatic and attractive, but he always excels when he plays unhinged roles like Sean Bateman in Rules of Attraction – Edgar Evernever definitely has the potential to reveal himself to be unhinged as well.

Behr hasn’t been seen on screen since 2012 when he starred in the TV series Breakout Kings, but the Roswell High and Dawson’s Creek star is probably due a comeback, even if he’s not quite as well known or beloved as some other names on this list.