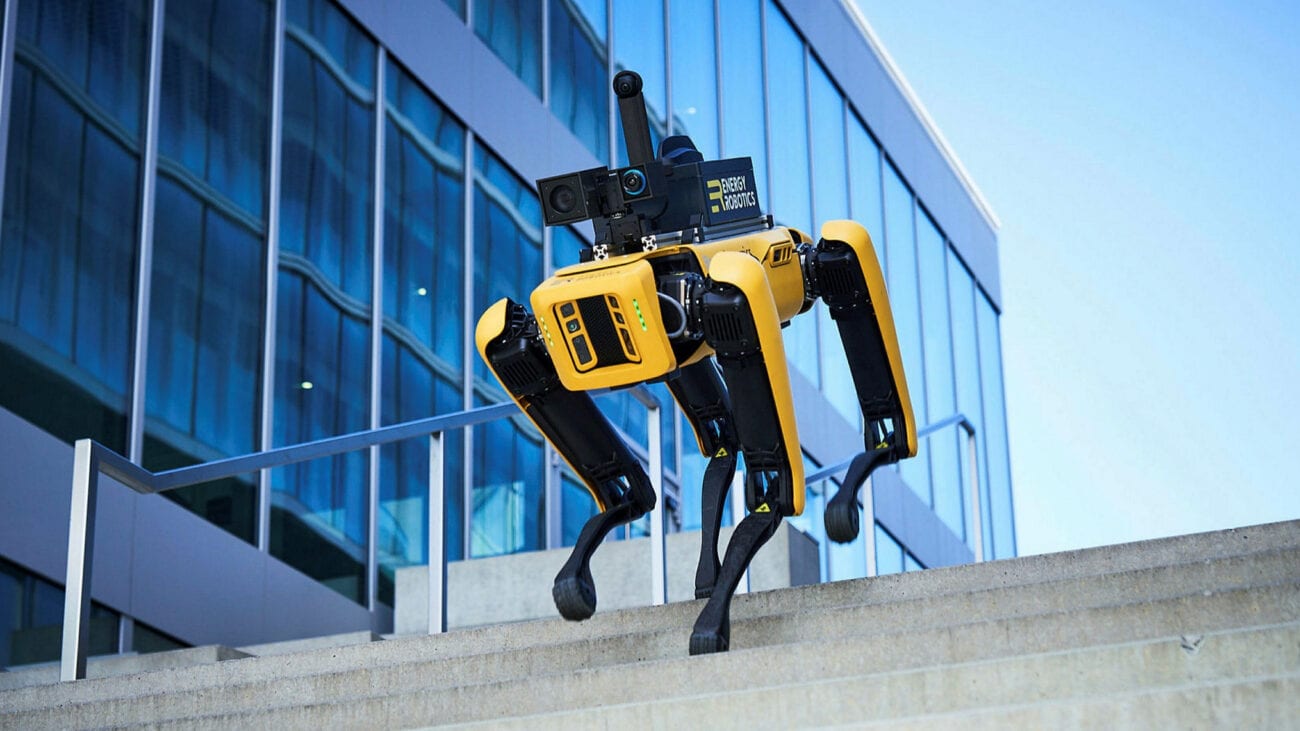 As science fiction stans know, we’re simultaneously living in 1984, A Clockwork Orange, Parable of the Sower, and a whole host of other works up to and including The Twilight Zone. Unfortunately, instead of George Jetson’s hovercar, Marty McFly’s time-traveling Delorean, or Star Trek’s utopia where we can “go where no man has gone before”, we get stuck with the dystopian dregs of zee-rusted sci-fi works.

Now, added to the list is the police hound from Ray Bradbury’s Fahrenheit 451. Or, as Twitter calls it, something out of your Black Mirror nightmares. The NYPD is testing out a new K-9 unit, and it’s eerily reminiscent of the fifties sci-fi novel where books are banned and that one episode of Black Mirror.

So let’s get in our time machines and travel to the very recent present when Boston Dynamics tested out this new type of K-9 unit: a robo-cop dog straight out of sci-fi.

Sod the dog. How long before we get Murphy?? pic.twitter.com/t0F54sPM2a

Boston Dynamics is a robotic engineering company. Founded in 1992, this tech domain grew out of Massachusetts Institute of Technology (MIT). Since December 2020, Boston Dynamics has been owned by Hyundai. And since 2019, they’ve been partnering with police departments to bring them robo-dogs. And by the way, the unit working with cops is called Spot. We don’t know whether to awww or . . .  😨

Granted, Boston Dynamic’s work goes back further. They built their first robo-dog in 2004, named BigDog, to accompany soldiers and help carry equipment. Other robots in Boston Dynamics’ arsenal include Cheetah, who can run almost thirty mph, and Atlas, a humanoid robot designed for search & rescue missions.

What's next for robotics? Our team talks about the potential for robots as helpers and the next steps to getting there on 60 Minutes Overtime.https://t.co/kw445EIc7o

Bringing us back to Spot. Spot was developed in 2016 to be a silent dog that can open doors among other things. Boston Police have used their Spot in their unit’s bomb squad. Granted, Spot’s usage isn’t restricted to police work – SpaceX uses their spot, named “Zeus” to clean up liquid nitrogen and a basketball team used these dogs as a cheerleading squad.

You can even own your own Spot for seventy-five grand. Purchase it on GitHub now!

Sometimes, life influences art. Boston Dynamics’ Spot and other robo-dogs inspired the Black Mirror episode that Twitter’s citing when they see said dogs as we speak. In said episode, called “Metalhead”, survivors of a postapocalyptic world are hounded by robotic dogs. Black Mirror creators earlier admitted their robo-dogs were influenced by Boston Dynamics.

This dog from Boston Dynamics, called Digidog (no relation to Digimon, though the theme song’s now stuck in our heads), was purchased by the NYPD for use with their bomb squad & emergency services.

Noting the comparisons, the NYPD launched their own tweet back in February: “The N.Y.P.D. has been using robots since the 1970s to save lives in hostage situations & hazmat incidents. This model of robot is being tested to evaluate its capabilities against other models in use by our emergency service unit and bomb squad”, the tweet read.

Black Mirror and The Simpsons have been on it with predictive programming. https://t.co/NGGQGsaf9E

However, with the new Boston Dynamics Digidog test going viral on Twitter as we speak, the Black Mirror and RoboCop comparisons are back in full force. And with them, sci-fi comparisons, calls for legislation, and even plans to fight back.

PSA: if you or someone nearby are being brutalized by a police Spot robot and can get a hand or something underneath, grab this handle and yank it forward. This releases the battery, instantly disabling the robot.

Keep your hands away from joints, Spot WILL crush your fingers. https://t.co/bMyEKmpS7R pic.twitter.com/vw8WDMWDAD

Last winter, when Boston Dynamics started making the news, some Twitter netizens began sharing blueprints for how to dismantle Spot. Basically, tickle his belly. Get Spot on his back from behind and remove the battery pack on Spot’s stomach. Word of caution: do NOT let your fingers near Sport’s joints – the joints will reportedly crush them.

If you don’t understand what I mean in this tweet I am talking about future models not specifically spot, and yes I am aware the robots do not disobey code inputs, that is literally why it is terrifying.

Others are going the legislation route. Some on Twitter have called for legislation limiting or banning the use of militarized AI for police forces. They’re being rebutted by people pointing out that Digidog was apparently operated from a remote control in the video and therefore not entirely autonomous.

Other Twitter netizens are wishing New York would spend less money on Boston Dynamics dogs and more money on affordable housing or other issues. Granted, seventy-five Gs is a lot of money for a robo-dog.

Do you think Boston Dynamics is bringing us one step closer to Dystopia, or do you think Twitter’s been bingeing too much Netflix? Let us know in the comments!