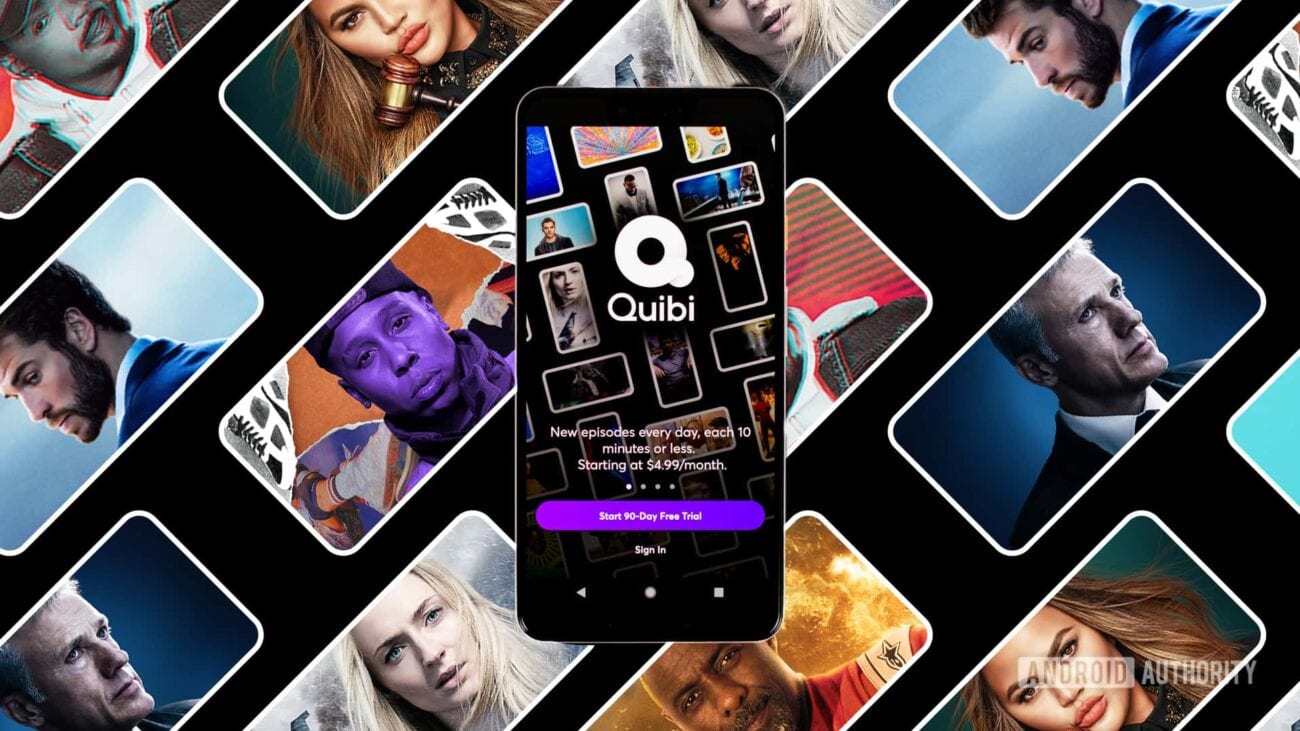 Quibi is shutting down and it comes as no surprise at all to anyone. The could-have-been streaming powerhouse that raised $1.75 billion was doomed to fail, right from its launch. Hollywood executive Jeffrey Katzenberg & former HP CEO Meg Whitman had set out with the vision to create something revolutionary in terms of a streaming platform for bite-sized content.

They wanted to create a new product that lets viewers watch videos on the go, enabling a decent viewing experience for videos in both portrait & landscape mode. Things didn’t pan out the way they’d hoped, however. “Our failure was not for lack of trying”, the company maintained – reflected also in their ambitious plans of getting top Hollywood talent on board their programming library – but more than one thing went awry.

When Quibi launched in April, it was a case of unfortunate timing. But to add to the obvious issues with the business environment, Quibi was also faced with lawsuits, subscriber woes, product limitations, and its nagging advertisements. All people wanted to do was mock the app. It became Quibi’s brand. 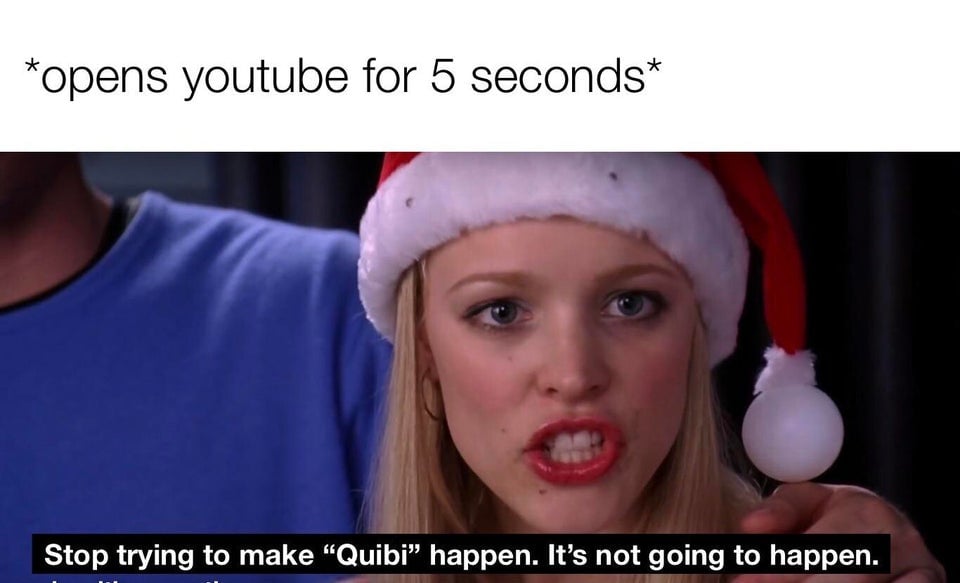 Make it happen? Don’t think so

This meme encapsulates our feelings about Quibi very accurately. Stop trying to force something that won’t happen. A streaming service has to promise its viewers one thing: good content wrapped in good user experience. Quibi failed dramatically on both ends. The content was mediocre & the navigation experience wasn’t helped by the fact that Quibi was originally designed to be watched on the go aka on watches & the like.

A mediocre experience for $5 a month? No thanks, we’ll head over to Tiktok for a quick dose of quality content.

A large part of binge-watching a new series on the block or re-watching an old favorite is being able to share it with the world through screenshots & memes. TV shows find a loyal fanbase when an amorphous group on the internet is brought together through the power of memes. Memes are the 2020 equivalent of word-of-mouth marketing – effective & cheap.

As content consumers, we’re spoilt for choice. In order for your content to catch people’s attention, you need to make it as accessible as possible. Quibi went counterintuitive on this by blocking screenshots or sharing of clips from its programming. Big mistake on the marketing end. How are you going to let people know about the shows . . . without sharing the shows? Learn from Netflix. 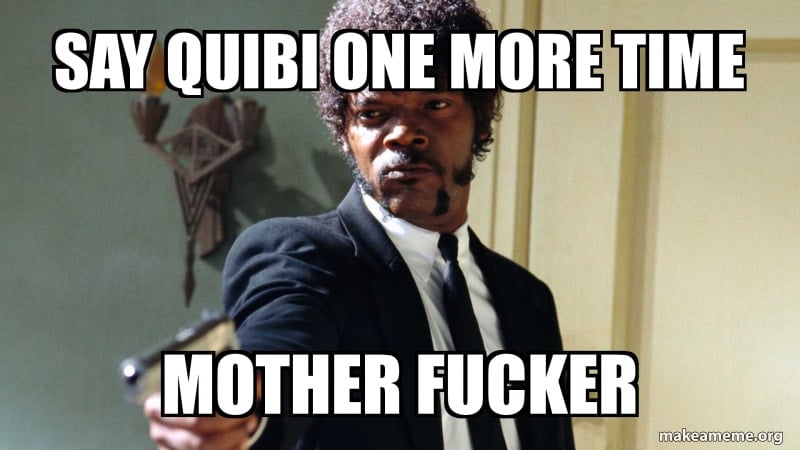 When the first advertisement aired during the Super Bowl, it was a fun moment. It got everyone asking about Quibi. But those ads soon took over YouTube & other video channels like parasites. There were five bizarre ads – from astronauts in space, to a zombie outbreak, among other apocalyptic scenarios. The message? Quibi episodes are so short, you can savour one of these even in your last moments.

Because of course, when people are really dying during a pandemic, that’s the kind of humor you bring to the table. Read the room! 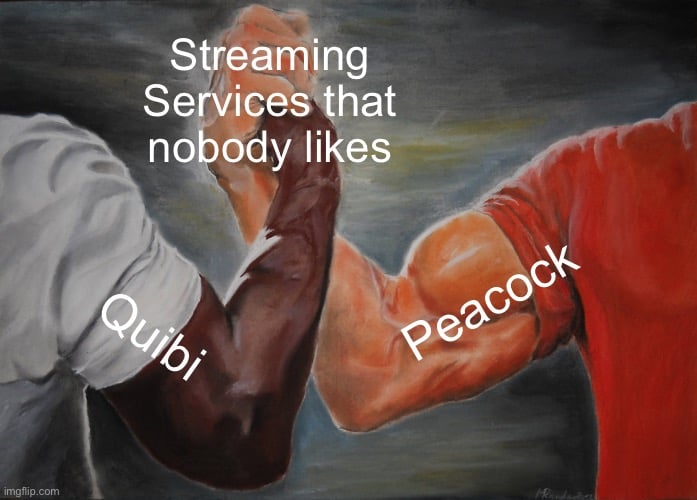 Have you heard of Peacock? It’s yet another over-the-top free ad-supported & subscription-based video on demand-based streaming service in the US. It doesn’t seem to be doing well either, so at least Quibi has company. 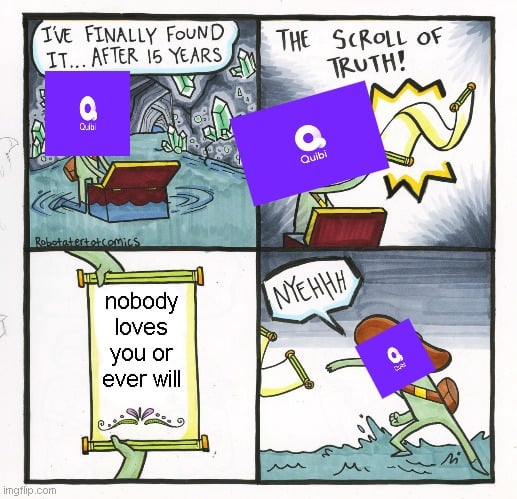 No one likes you, Quibi

It’s very likely no one outside of Twitter journalists & media people knows about Quibi. It’s also very likely that none of those aware of Quibi’s existence have actually watched any of the shows or can name any of the shows it streams, despite having names like Zac Efron, Chrissy Teigen, etc associated with it.

Hate to break it to you, but when you’re having an identity crisis yourself, stop expecting others to decipher you. It’s what Quibi was complacent about. Look what happened. RIP.