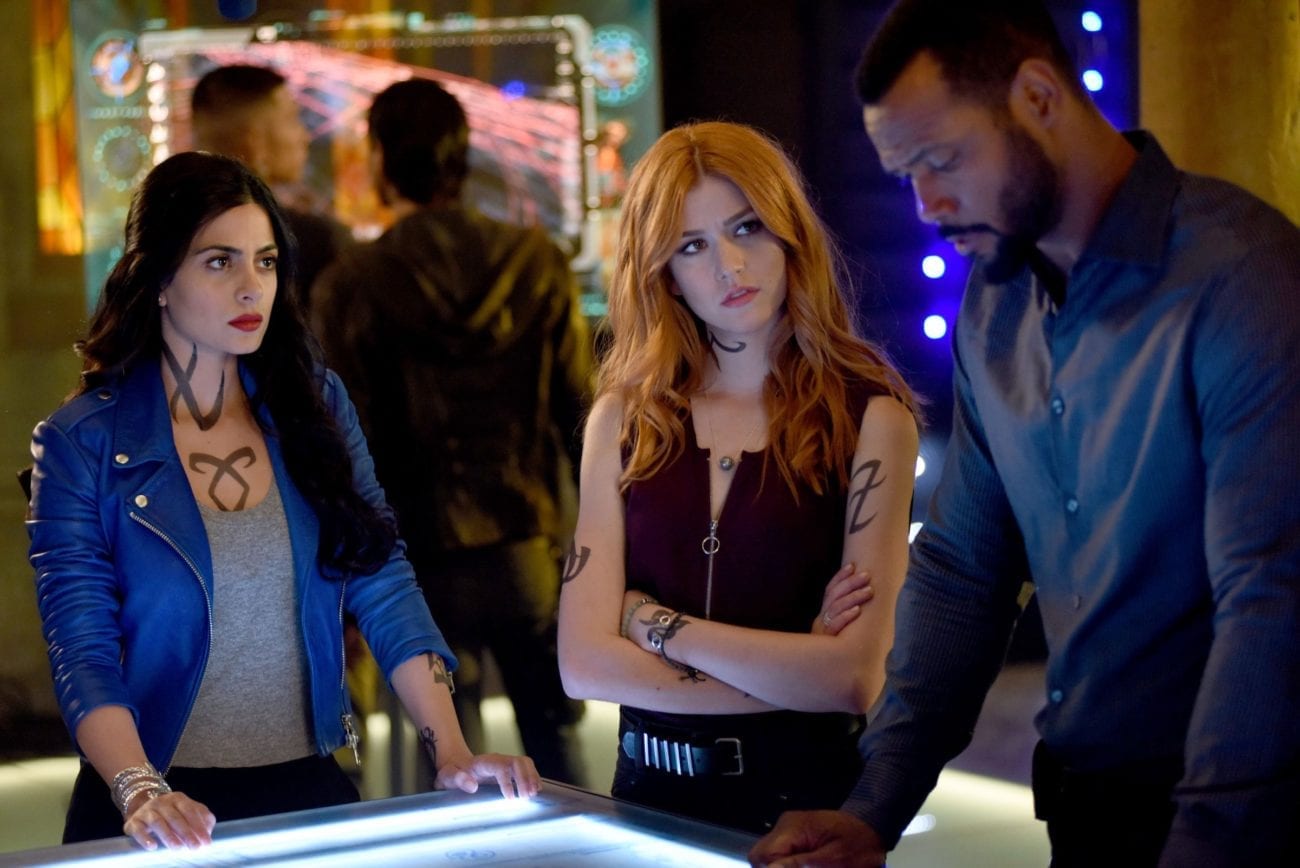 Nothing brings a fandom together like a convention. From San Diego Comic Con’s early beginnings in the 70s to their global boom in recent years, cons have been amassing hundreds of thousands of dedicated fanatics, cosplayers, and stars for celebrations of everything geeky.

Shadowhunters is a show tailor-made for conventions. Not only do the hunters and demons of its cast sport some of the slickest costumes on TV right now (replete with badass leathers, sophisticated velvet, and iconic tats), the show’s ensemble is comprised of pretty much the nicest bunch of actors you’ll ever have the fortune of meeting. 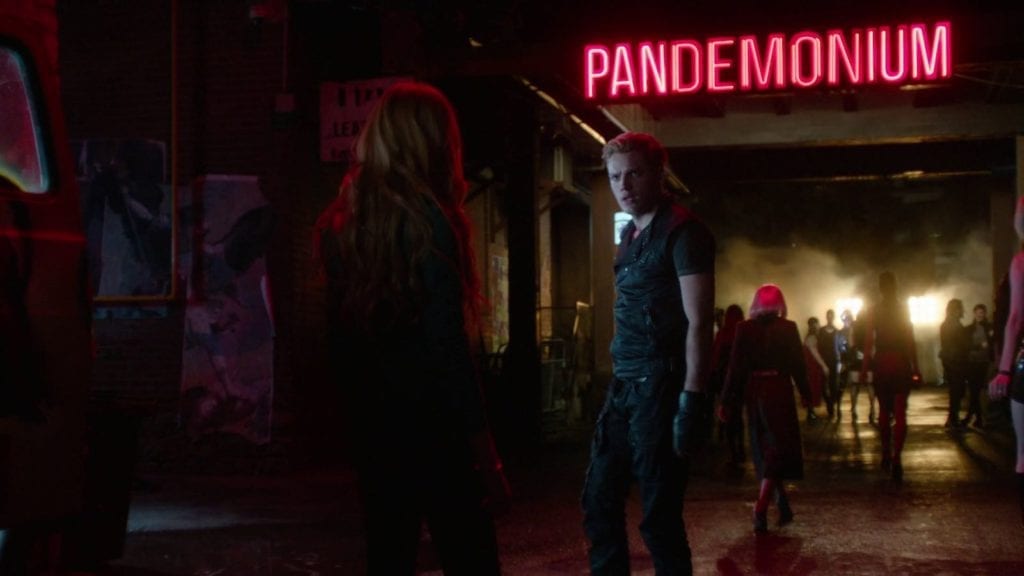 Pandemonium is also the moniker of the show’s secret organization of mundanes who try to summon demons and spirits, a fitting metaphor for the hordes of dedicated fans who have devoted their lives to rallying against the series’ unjust cancellation during the last year.

Film Daily had a chat with a few of these committed Shadowhunters fans who attended the London con over the weekend. As well as coming together to show their support for the boundary-breaking show, they got a glimpse of some extra special guests including Matt Daddario, Isaiah Mustafa, Jade Hassouné, and Clary Fray herself, Katherine McNamara. 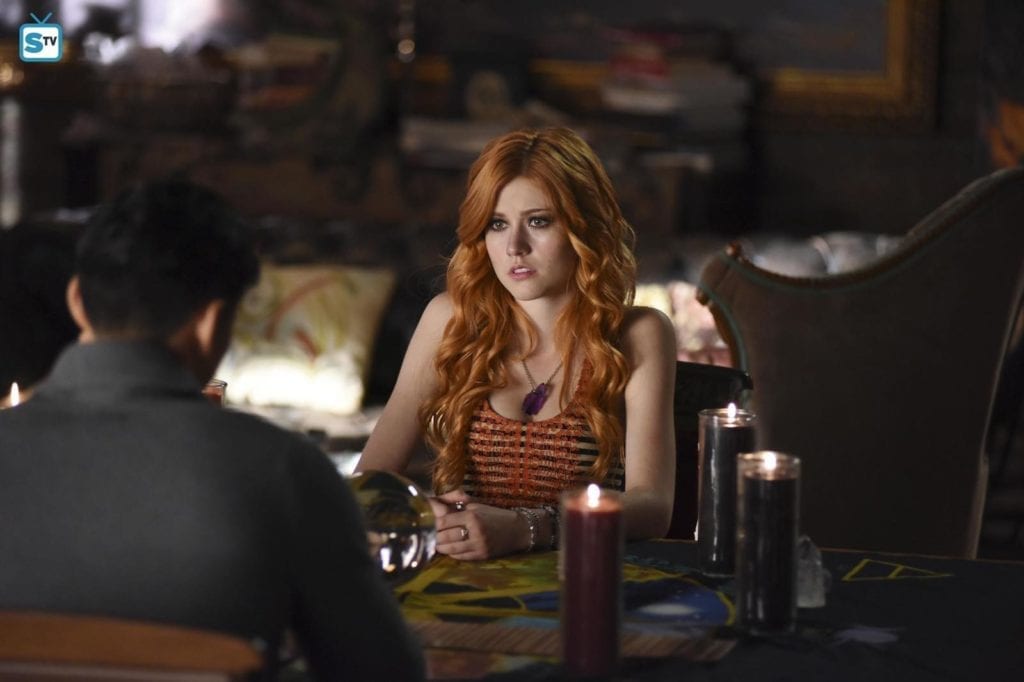 Salomé had one of the best fan interactions we’ve ever heard, when she presented some homemade gifts to the cast:

“They were Christmas ornaments with an angelic rune on it and objects relating to their characters inside. They all took the time to look at it and everything inside it. All of them really appreciated it and their different thank-yous were all very touching. And I have to mention the group picture as well because being in the middle of all these amazing humans is very overwhelming in the best way possible!”

Once again, Salomé’s experience proves just how inclusive the fandom is. “With Shadowhunters, I know I’m not going to be disappointed by some sexist, racist, homophobic bullsh*t.”

With geeky culture becoming ever more mainstream, an element of toxicity amongst certain communities is inevitable, and there are several conventions that not everyone can attend feeling 100% safe. It’s heartwarming to know that those kind of invasions of one’s rights are a rarity, if not completely nonexistent, at the cons attended by the heroic Shadowfam.

Michelle recounts a hilarious experience when she attended the convention with her best friend, demonstrating how generous and riveting their panels are – as well as providing Exhibit A for why actors shouldn’t go anywhere near the scripts for their shows. 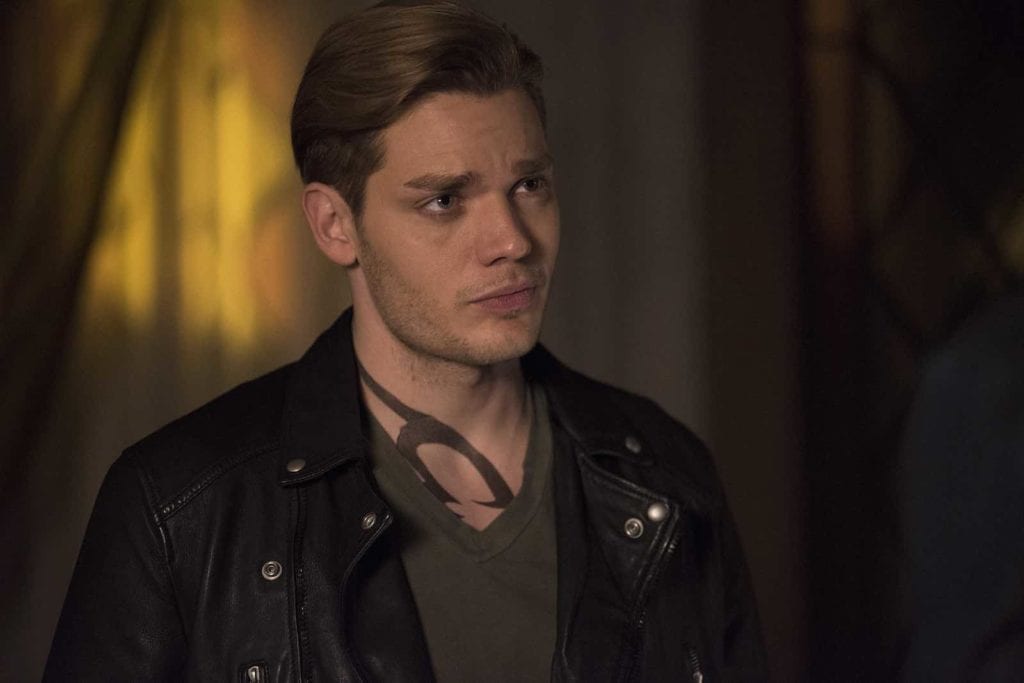 “Getting Dominic Sherwood and Matthew Daddario in a room together is pretty much all you need to create instant hilarity. You wind them up and watch them go. We asked them what they would change their signature weapon to, if they could change it to any weapon in the world, with Matthew saying that ‘a hot-air balloon would work great, too. Throw rocks over the edge. No vampires are getting near there. What are you going to do, vampire? Huh?’”

Michelle also reiterated how kind the cast is with their fans, especially Matt. She explains: “Matthew seems to feel a huge sense of responsibility for the fans and shows a lot of understanding, not just of what he owes fans, but of what fans deserve. You can tell he wants the fans to have the best experience they possibly can at this event which is, frankly, ludicrously expensive and kind of insane by its very nature.

“The entire cast goes so far out of their way to give back to their fans – it’s unreal and wonderful.” Even if the organization was a bit of a disaster, to paraphrase Michelle, the warmth exuding from every single member of the Shadowhunters cast was unparalleled. 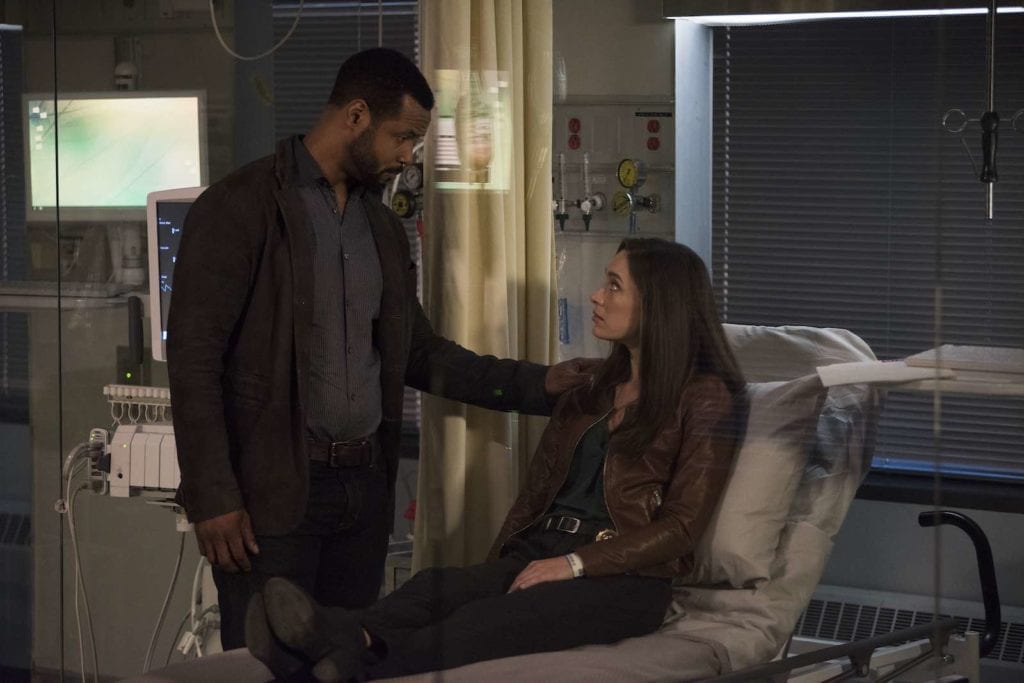 SHADOWHUNTERS – “On Infernal Ground” – In the season three premiere, secrets abound as the Shadowhunters and Downworlders try to get back to normal after Valentine’s death. This episode of “Shadowhunters” airs Tuesday, March 20 (8:00 – 9:00 P.M. ET/PT) on Freeform. (Freeform/John Medland)
ISAIAH MUSTAFA, ALEXANDRA ORDOLIS

Dawn, a proud Shadowhunters fangirl, had nothing but compliments for the best cast on the small screen. “I learned that Dom, Kat, Isaiah, Jade, Matt, and Will are not only talented actors; they are incredibly sweet, funny, and friendly people with great respect, love, and concern for their fans.

“Dom Sherwood is incredibly sweet, funny, kind and gives the best hugs. Kat McNamara is a total angel with a genuine interest in meeting every fan. She is beautiful inside and out.” 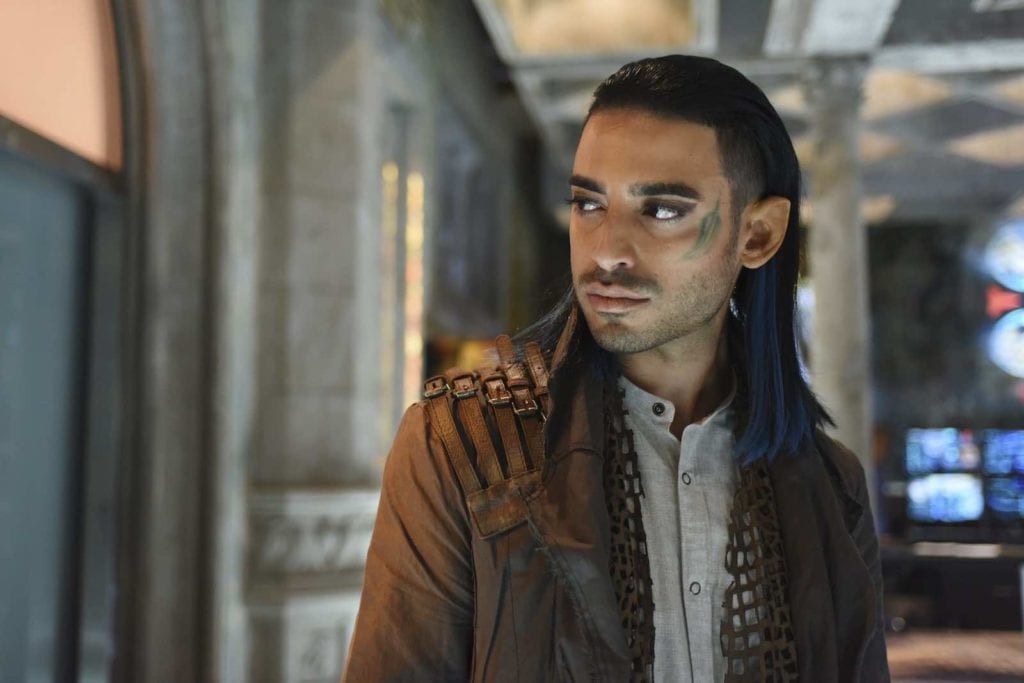 Our favorite juicy insight, though, is that “Jade Hassouné is a talented musician. We had a sneaky listen to tracks from his upcoming EP Love Letter to a Fandom. Evidently, the Shadowhunters fandom and family are so empowering that they even inspire music from the cast! Need we say more to convince Freeform to turn around their dumb mistake to cancel this glorious show?”

Tiffany echoes everyone’s unwavering support for the cast, explaining how the enthusiasm of the actors is just as palpable as the love the fans have for the show. “During a panel, Jade said that when auditioning, he saw pictures of the cast and thought ‘these are my friends’. That is what happened to me this weekend. We are all united by something we truly love and are passionate about – and look at how much we’ve achieved in hopes to keep having it in our lives. It was truly a beautiful experience.” 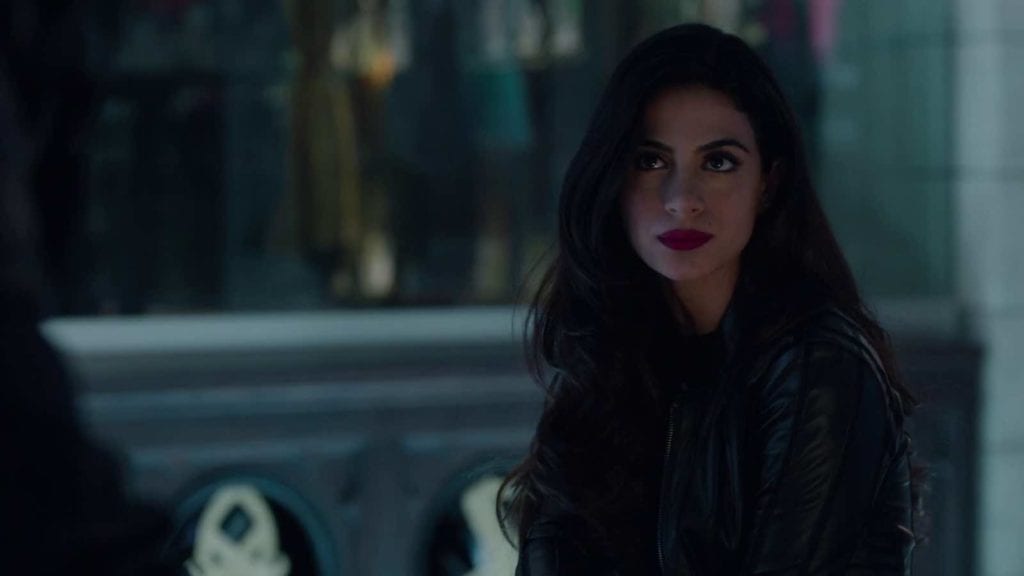 Malin’s experience at the convention reinforced how vital it is that this show continues. “The main reason I want Shadowhunters to get saved is Izzy. She used to struggled with her mental health, and I struggled with mine at the same time. It’s really hard for me to talk about it, but at that time I wasn’t alone anymore. I wasn’t the only human being that had problems. Her self-confidence, her fight in trying to get over it, gave me so much strength, it’s unbelievable.”

There will always be role models in pop culture, but Shadowhunters has given us some of the very best. Coming from a diverse range of backgrounds and experiences, the cast exemplifies exactly how stars can inspire and encourage the audience through the darkest moments of their lives.

Malin says it better than we ever could: “You see, it’s not just a simple TV show. It is so much more to so many people around the world. We need to #SaveShadowhunters for people who were like me before I got better – with their inspiration.”