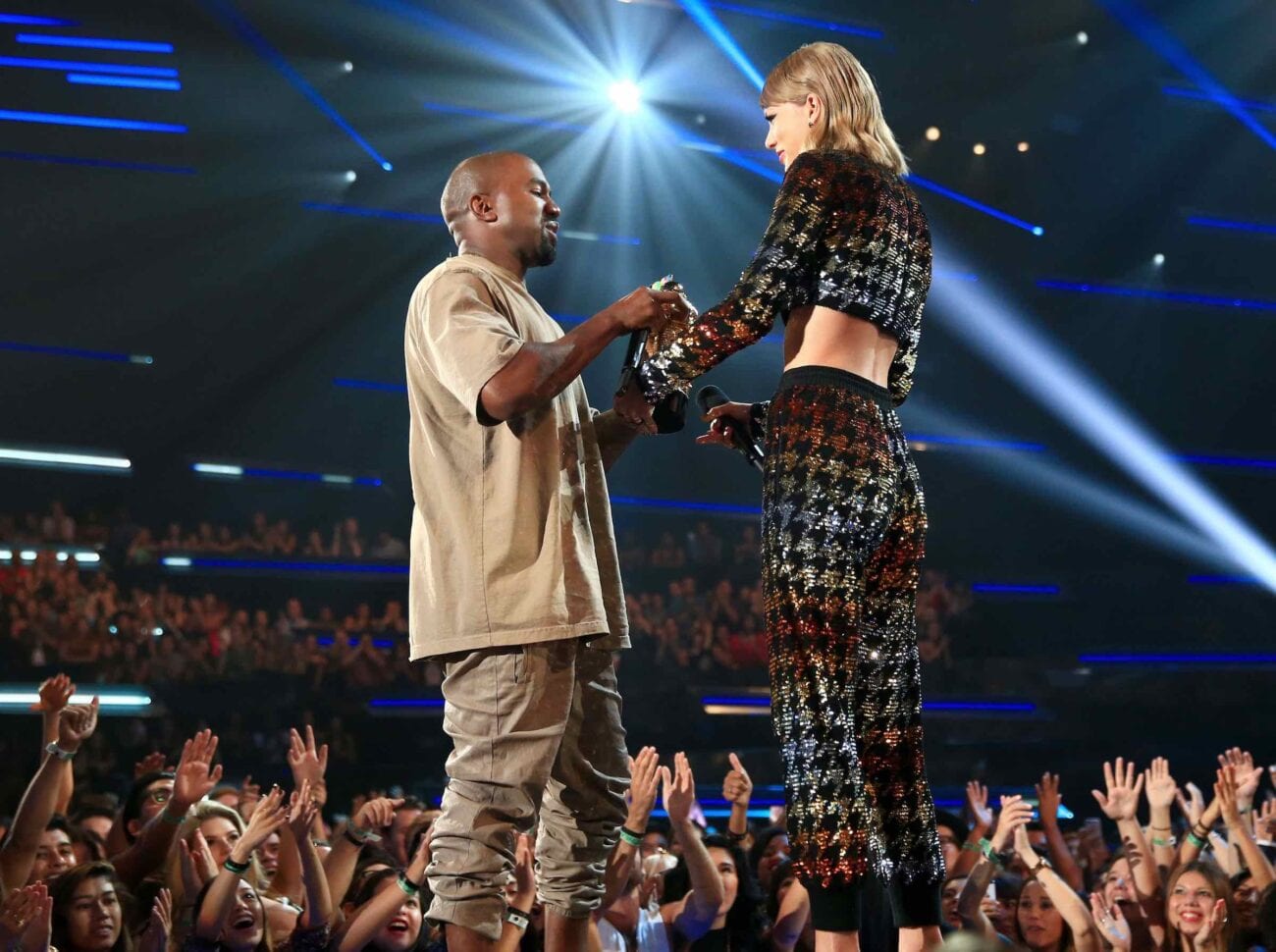 Have Kanye West and Taylor Swift made up? A timeline of their feud

It’s a pop culture saga for the ages: the Taylor Swift vs. Kanye West feud. What began as a bizarre moment at an awards show has developed into a series of surreal events including illegal recordings, an uncomfortable music video, and bitter banter between two music giants.

For anyone out of the know, it would sound like this whole article is made up, but these events have all actually happened, regardless of how strange the whole situation is. To straighten things out, here’s a timeline of every major event of the Swift/West feud so far. Who knows, this feud may last many more years into the future. 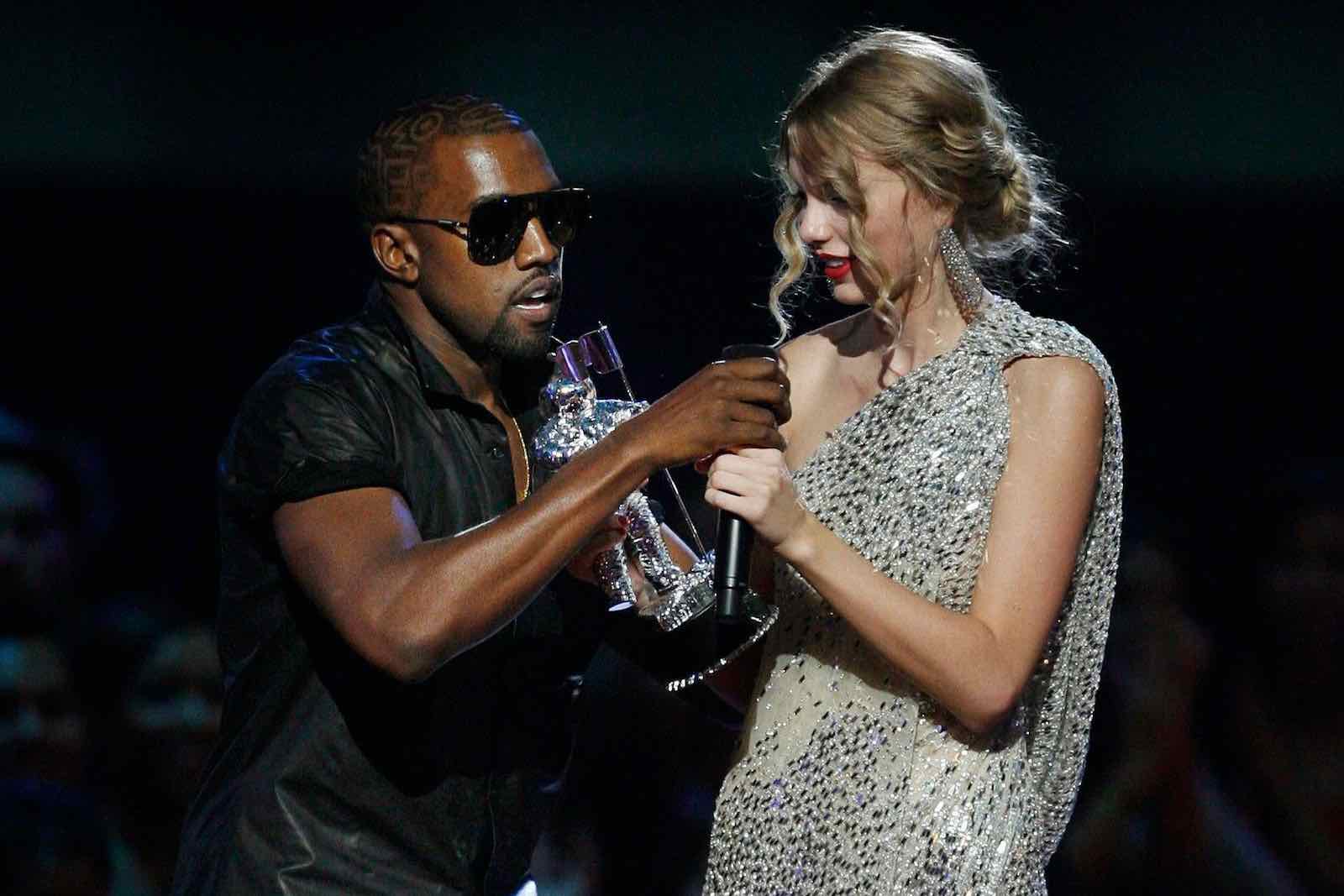 It’s been eleven years since one of the most talked-about VMAs moments of all time. Time flies, huh? Let’s take a look at where it all began. Taylor Swift won “Best Female Video” at the MTV Video Music Awards for “You Belong with Me”.

Right before Swift could make her speech, she was interrupted by Kanye West. West walked up the stage, took the microphone, promised to let her finish, and proclaimed, “Beyonce had the best video of all time.” Swift was visibly upset at the incident but had to leave and perform shortly after.

West was talking about “Single Ladies”, which eventually won three VMAs that year. During her speech for winning “Video of the Year”, Beyonce invited Swift to finish her speech. West, however, didn’t leave unscathed and was repeatedly berated by Swift fans and even President Obama, who called him “a jackass.” 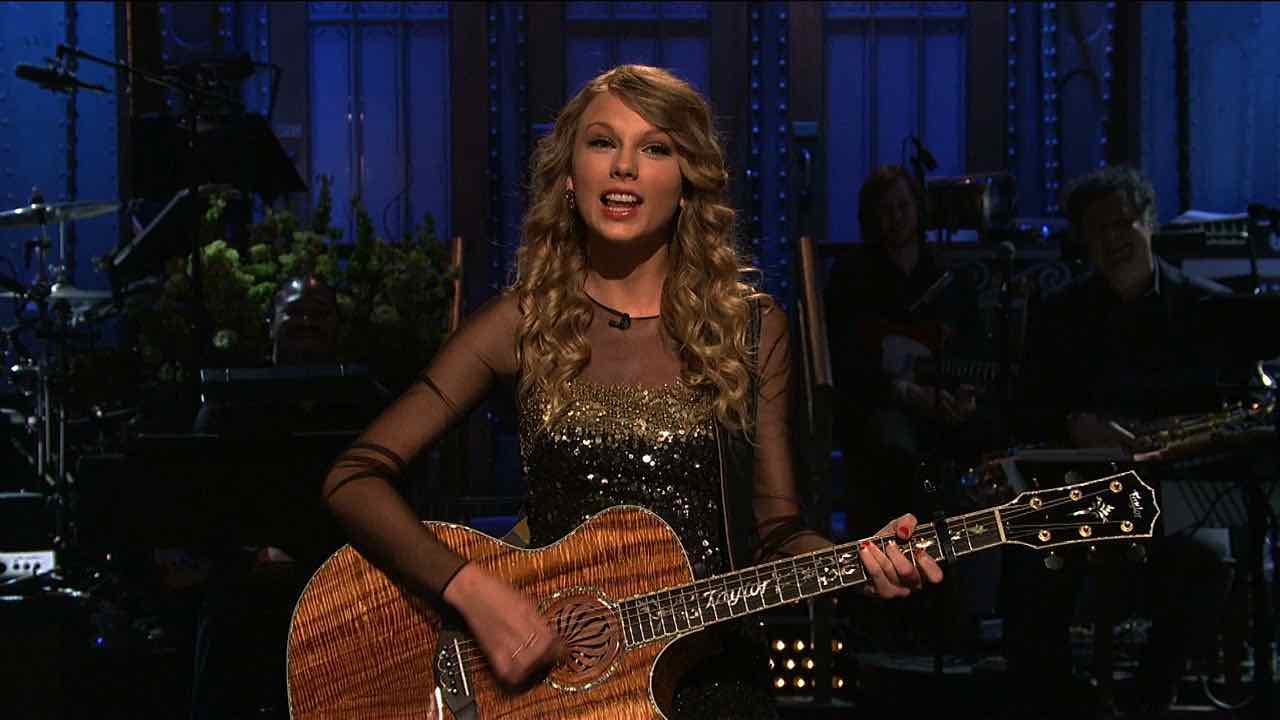 On The Tonight Show with Jay Leno the next day, West said it was “a difficult day,” acknowledging he was “rude” and he “hurt someone.” A few days later, Swift told the hosts of The View West hadn’t apologized, but she was comforted by the “other artists who showed [her] love.”

By November, however, Swift mocked the awards moment during her self-written monologue when she hosted Saturday Night Live. 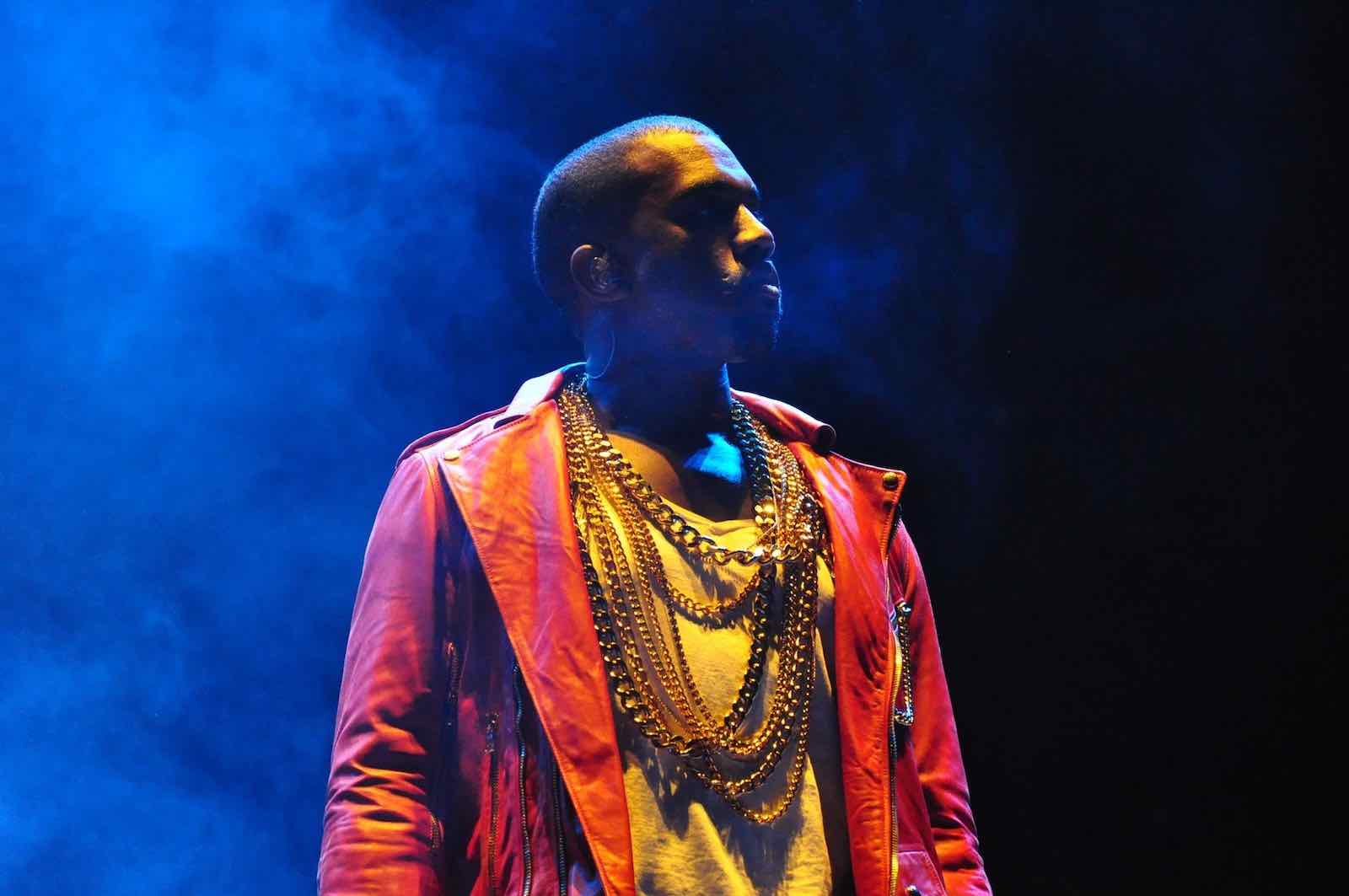 Both Swift & West were silent on the matter, for the most part, following the SNL jab. However, in March 2012, Swift was willing to wear a shirt from West’s clothing label on the cover of Australian Harper’s Bazaar.

In June 2013, West told The New York Times he considered his album My Beautiful Dark Twisted Fantasy his “long, backhanded apology.” West wanted the album to be an olive branch to his fans. “I was like: ‘Let me show you guys what I can do, and please accept me back. You want to have me on your shelves,” West said.

Two years later, Swift & West were caught smiling & talking during the 2015 Grammys. West revealed the next day Swift had approached him, saying it was a friendly conversation. In August, Swift implied she was ready to be friends with West when she spoke to Vanity Fair, having reached mutual respect for each other. 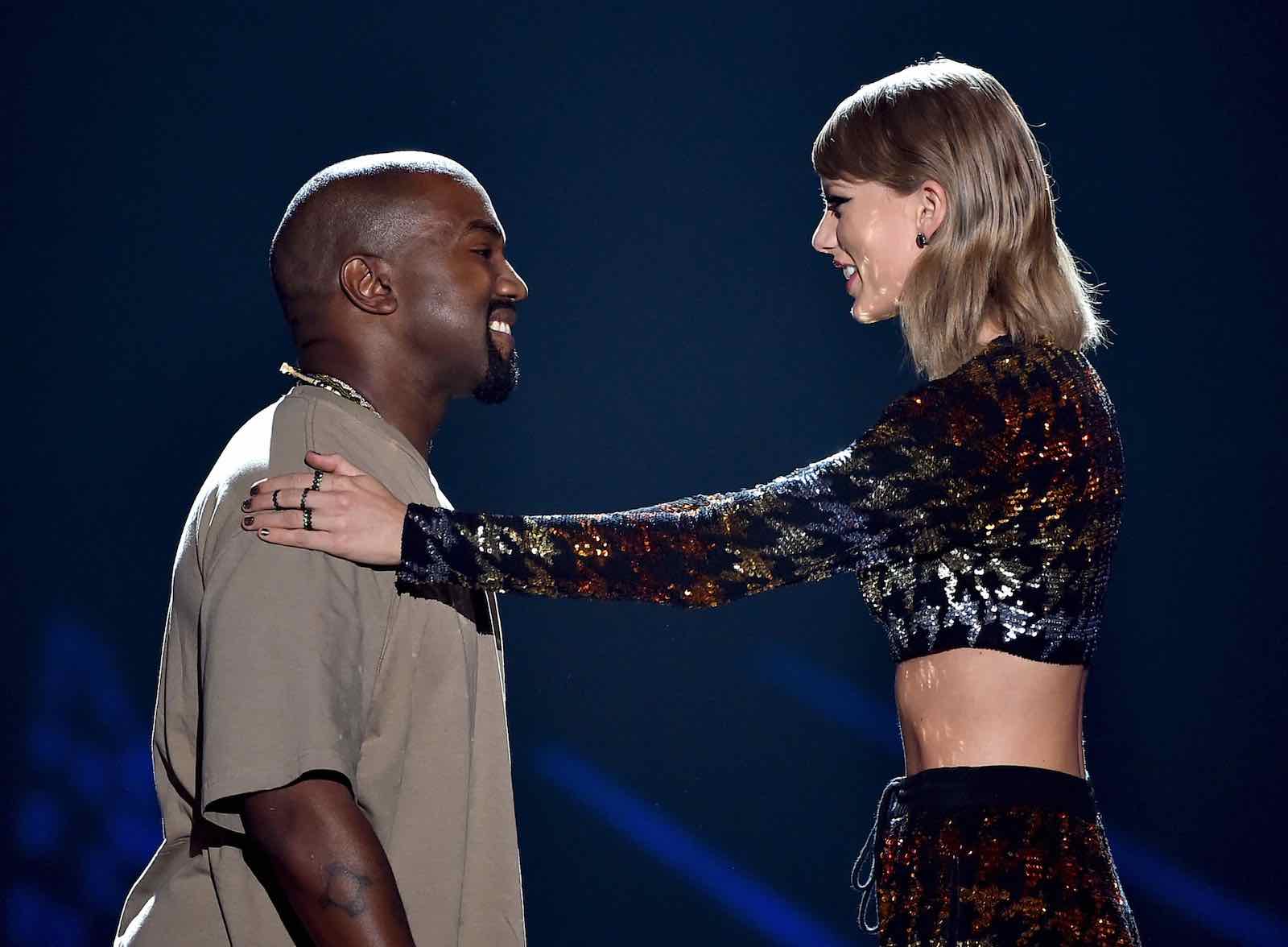 Finally, on August 30, 2015, Swift was selected to give West the Video Vanguard Award. Right before giving West the award, Swift poked fun at the incident, saying, “I first met Kanye West six years ago, at this show, actually!”

Swift went on to say how her brother first introduced her to Kanye West’s music with his album College Dropout. Swift ended the speech in the best way possible: “So I guess I have to say to all the other winners tonight: I’m really happy for you, and I’mma let you finish, but Kanye West has had one of the greatest careers of all time!” 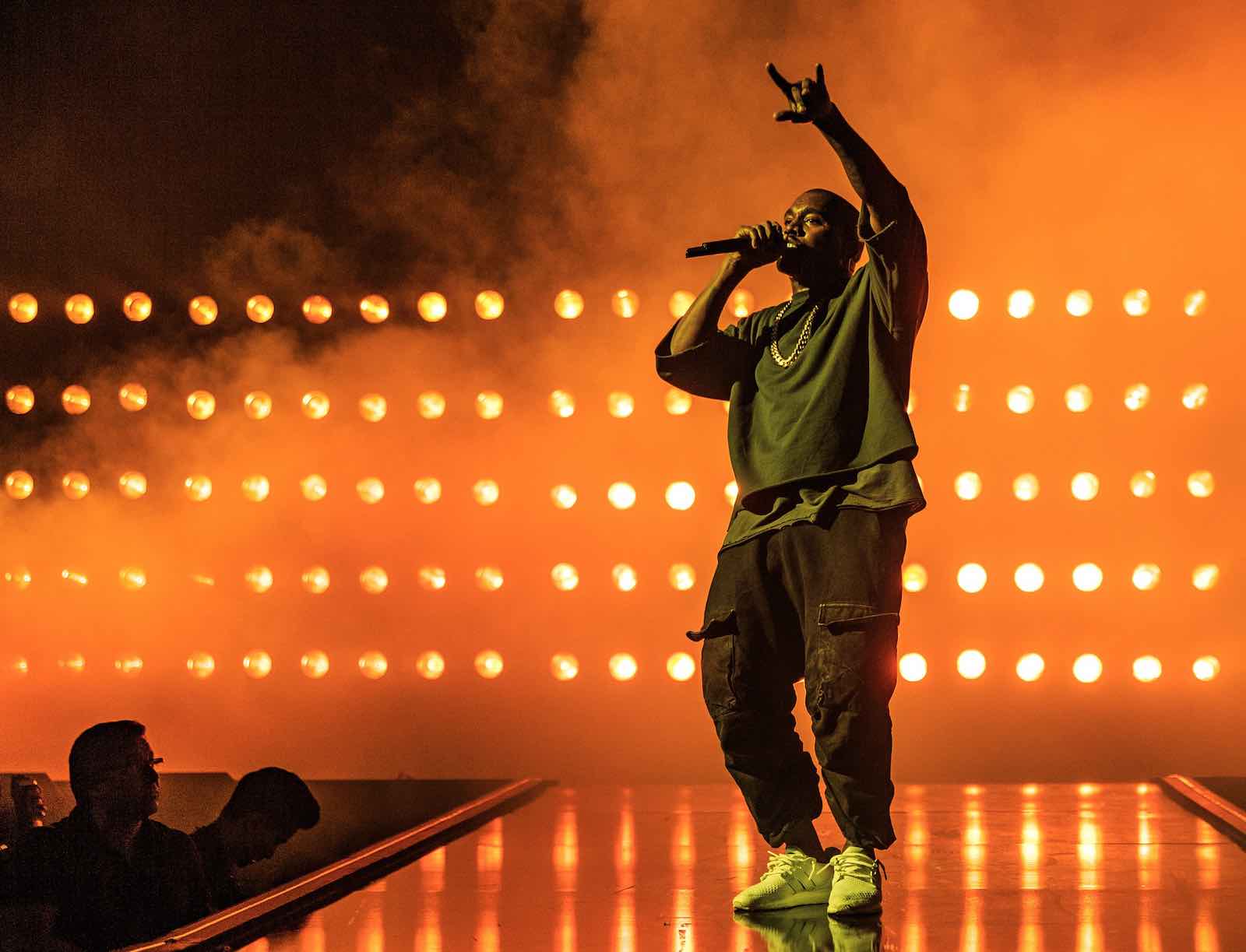 It seemed as if West & Swift were looking toward a budding friendship, with rumors of a song collaboration in the works. But it came crashing down when West released “Famous” for his album The Life of Pablo. For “Famous”, West wrote: “I feel like me and Taylor might still have sex / Why? I made that bitch famous.”

Taylor’s rep told Billboard “Kanye did not call for approval” and claimed Swift was never made aware of the lyric. The rep said the West only asked whether Swift could release “Famous” on her Twitter account. 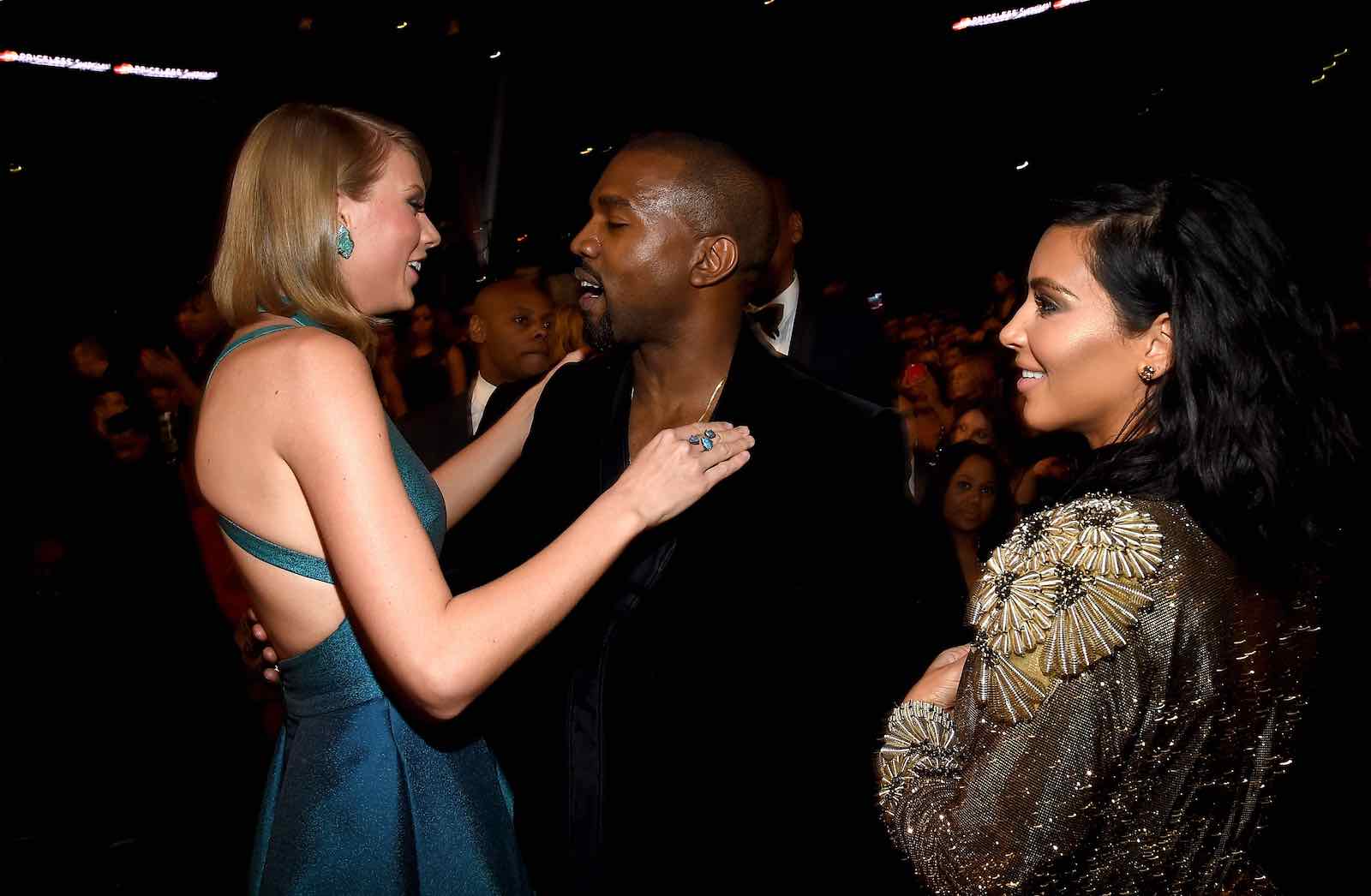 Kim Kardashian West decided to join the feud when she decided to speak up to GQ. Kardashian claimed Swift “totally approved” the lyric and knew it was coming out, citing a recorded phone conversation between West & Swift.

Swift’s rep came forward again to say Kardashian was “incorrect,” as West only called Swift once in January 2016 and haven’t spoken since. The rep claimed Swift had never heard the song and was surprised to hear the phone call was recorded. 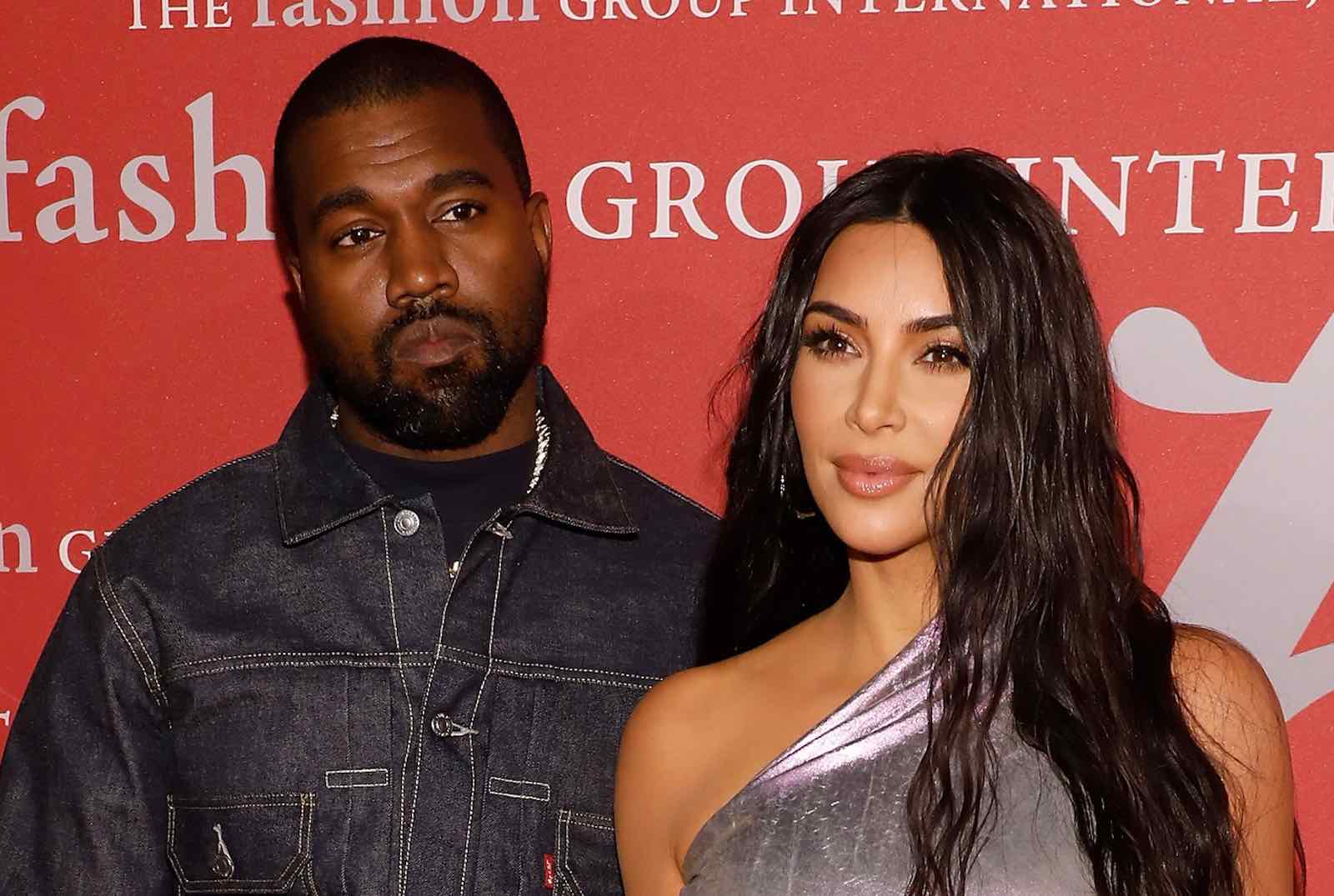 After a Keeping Up with the Kardashians episode revealed Kim openly defended West, Kardashian decided to make the recorded call public via Snapchats. The footage seems to show West & Swift talking about “Famous”, with Swift calling the call-out a “compliment.”

Swift, however, rejected Kim’s Snapchats, saying she wasn’t told the entire lyric and hadn’t heard the whole song. Swift went as far to call the whole ordeal “character assassination” for “being falsely painted as a liar.”

A Twitter user also pointed out the footage didn’t show Swift approving the recording of the call, which sparked questions on whether the Snapchats were legal. 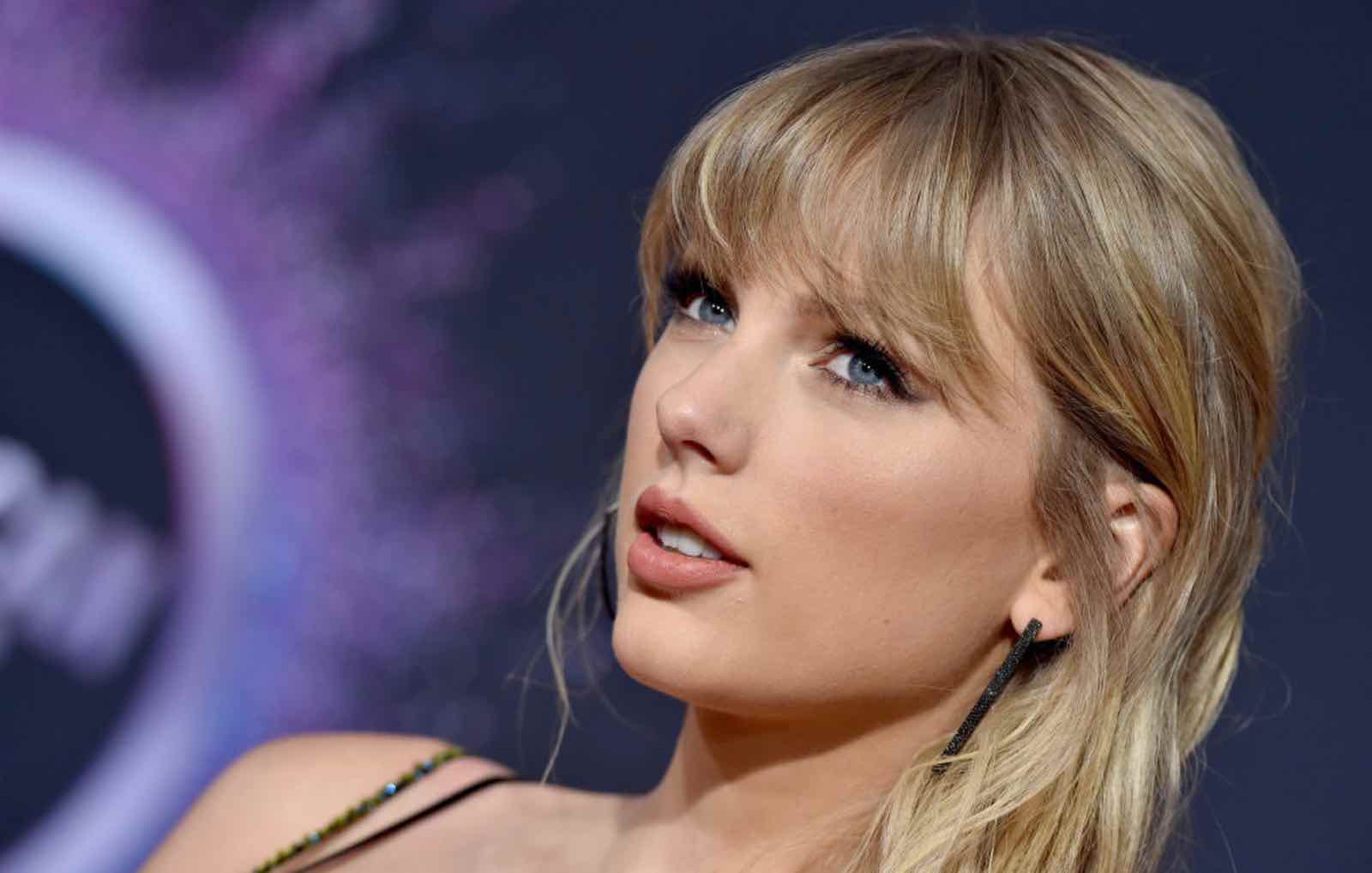 None of the three parties spoke up about the feud until early 2019 when Kardashian told Andy Cohen she was “over it.” Though Kardashian said she was “over it” on Watch What Happens Live, Swift addressed the recording later in June, saying she regarded the footage as “bullying,” comparing it to her legal battle with Big Machine Label Group. 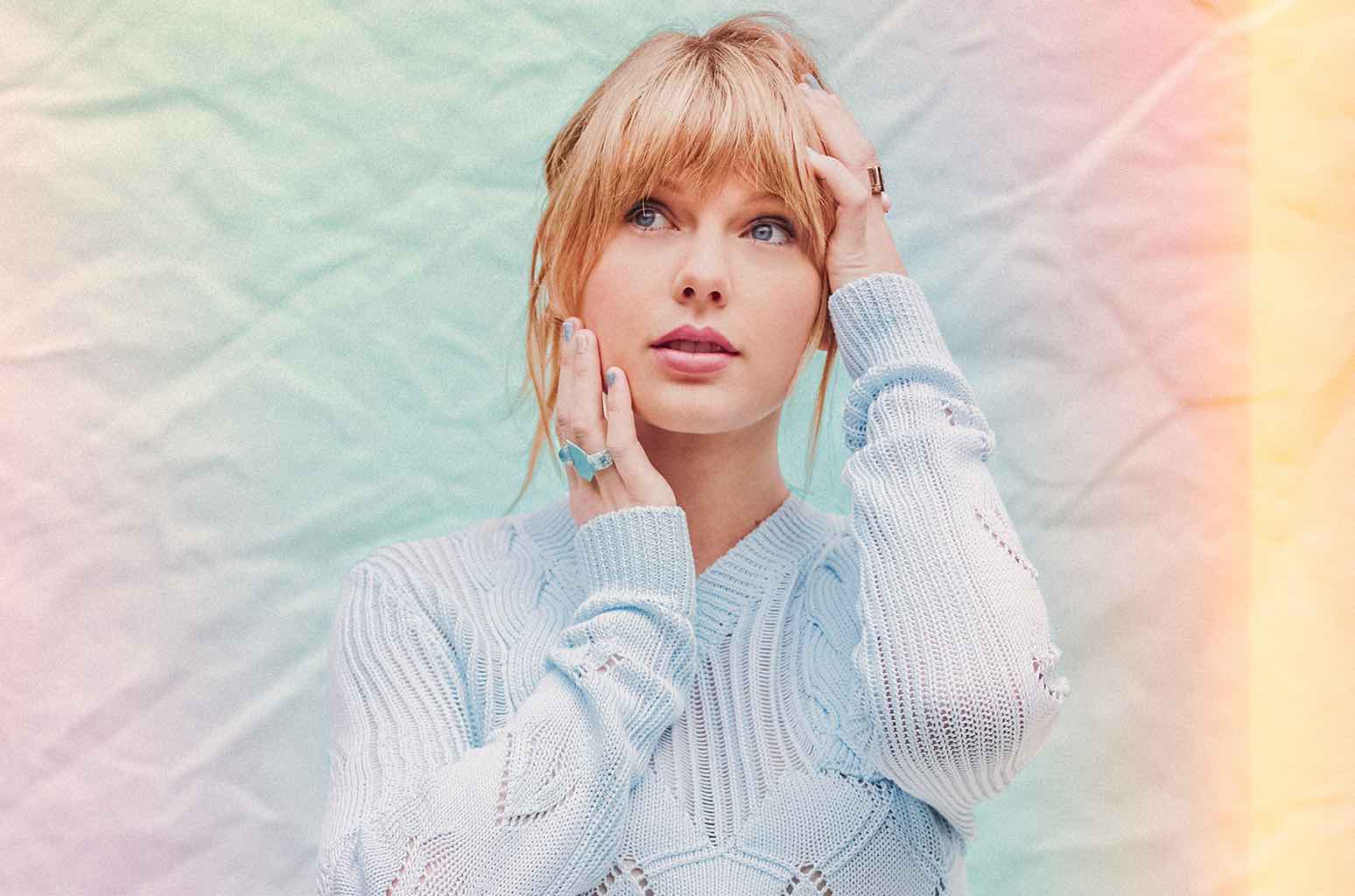 Ten years after the original incident, Swift revealed her personal diary entry from the day of the VMAs as a part of the release of the deluxe version of Lover. The entry describes her disbelief of the whole situation from meeting West to winning the award to being interrupted by West himself.

A month later, Swift told Rolling Stone the “Famous” lyric & recorded phone call was “not just a singular event.” She also said she “got really sick of [their] dynamic.” Swift confessed she thought she had “reconnected” with West after a phone call shortly before the 2015 VMAs, when West asked Swift to present West with the Video Vanguard Award.

Swift said West gave her flowers as an apology and legitimately thought they were “back on good terms.” However, Swift concluded West “is so two-faced” because he wants to be nice “behind the scenes” but he would rather “look cool” in public. 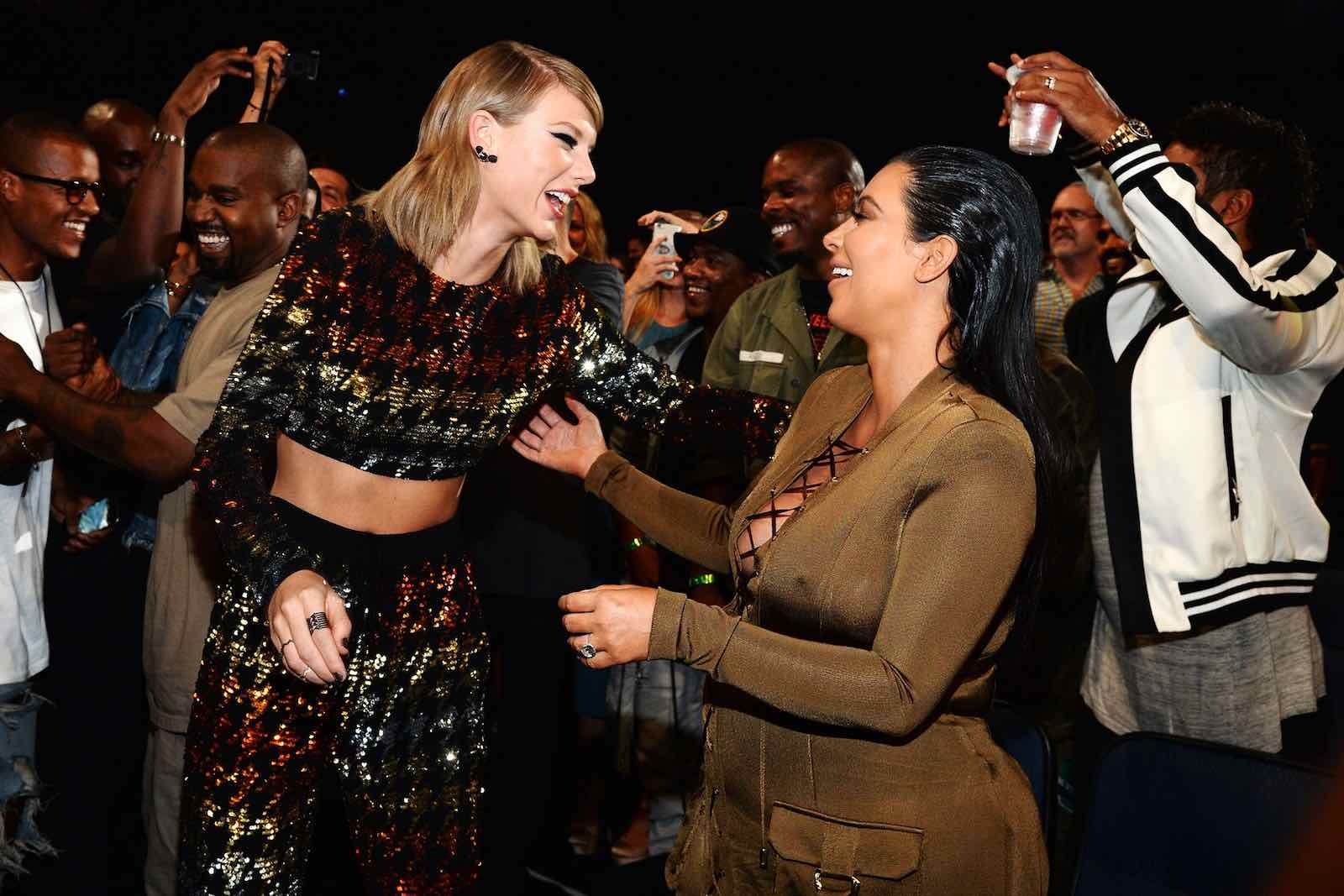 More footage from the controversial phone call was leaked in late March, which sparked the #KanyeWestIsOverParty trend. According to the footage, Swift didn’t give West permission to use the “Famous” lyric. Instead, they were discussing a different part of “Famous” and West asked Swift if she would be willing to help with the song’s release.

Two days later, Swift referenced the leaked video in her Instagram story. Though her tongue-in-cheek response was meant to help the story raise awareness about a charity organization, Swift mentioned how the footage proved she “was telling the truth the whole time” and was quick to recall how the footage “was illegally recorded” and was “edited & manipulated in order to frame” Swift. 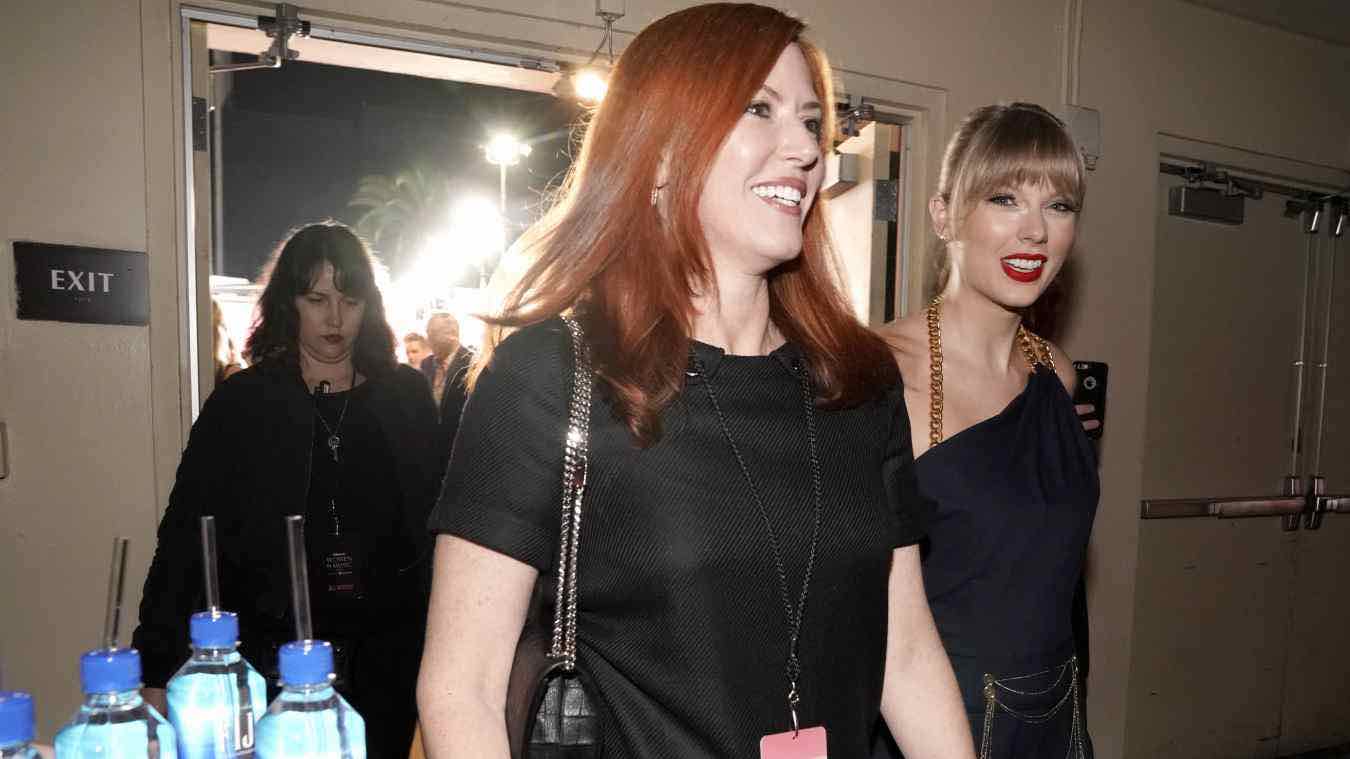 After Kardashian responded to the footage on Twitter, Kardashian started to trend with #KimKardashianIsOverParty. Kardashian explained she took issue with Swift because Kardashian believes “Taylor lied through her publicist” and claimed she never edited the footage. Kardashian also believes Swift “manipulated the truth” by saying there wasn’t a phone call.

Swift’s publicist Tree Paine also published a statement on Twitter, claiming West “did not call for approval” and only asked about participating in the song’s release. Paine said Swift turned down West’s offer and “cautioned him about releasing a song with such a strong misogynistic message.” 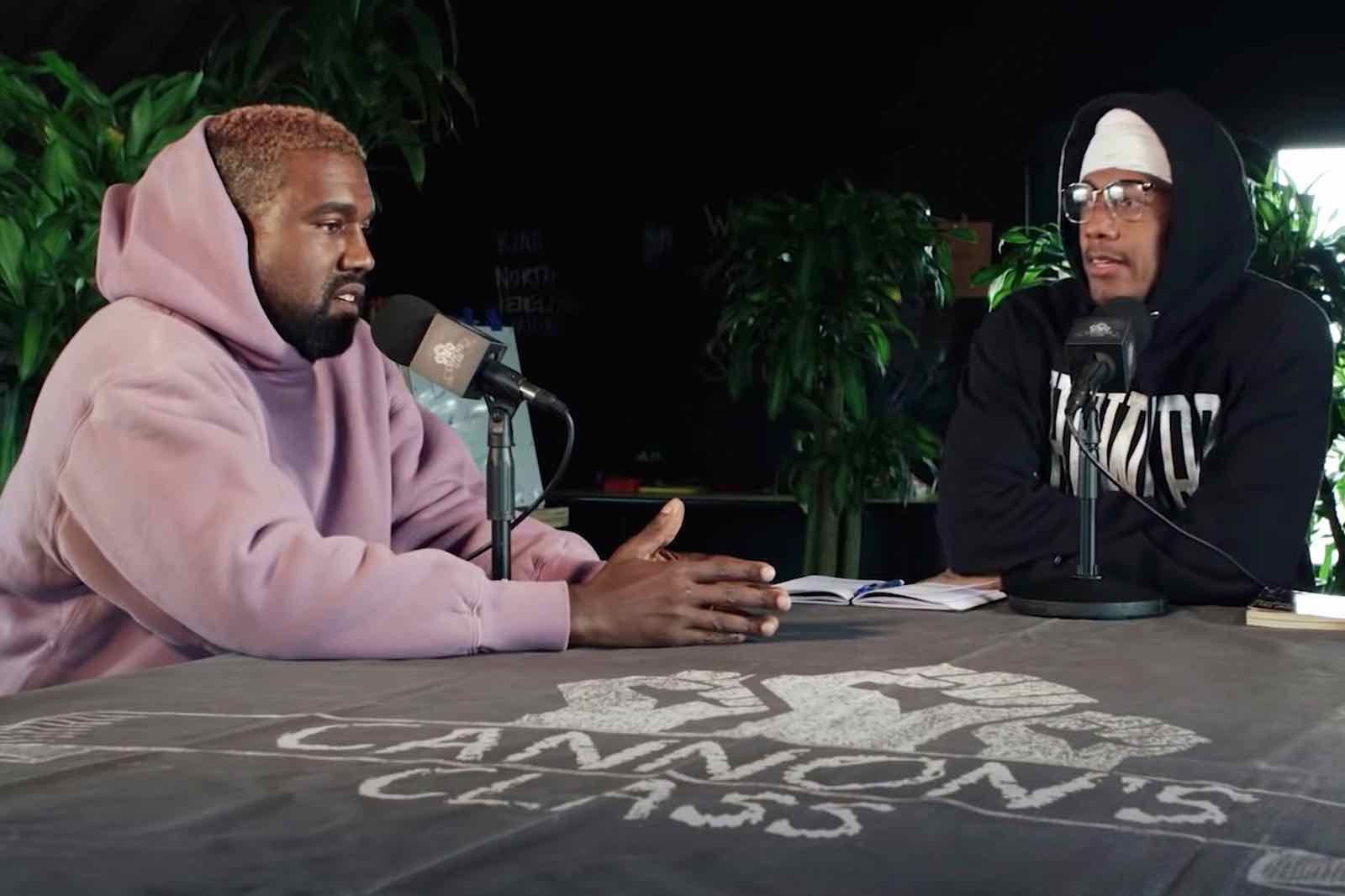 Early Sept. 2020: West says the VMAs incident as God’s will

Strangely enough, West told Nick Cannon on Cannon’s Class about the eleven-year-old incident. West said he only interrupted Swift because, “If god ain’t want me to run onstage and say Beyoncé had the best video, he wouldn’t have sat me in the front row.” When Swift won the award, West thought god was “giving [him] the information” to speak up about Beyonce.

West claimed if he were sitting in the back and it was the first award of the night he “wouldn’t have made it so ridiculous.” West also claimed he had never heard of Swift before the VMAs and he truly felt “Single Ladies” was “one of the greatest videos of all time.” 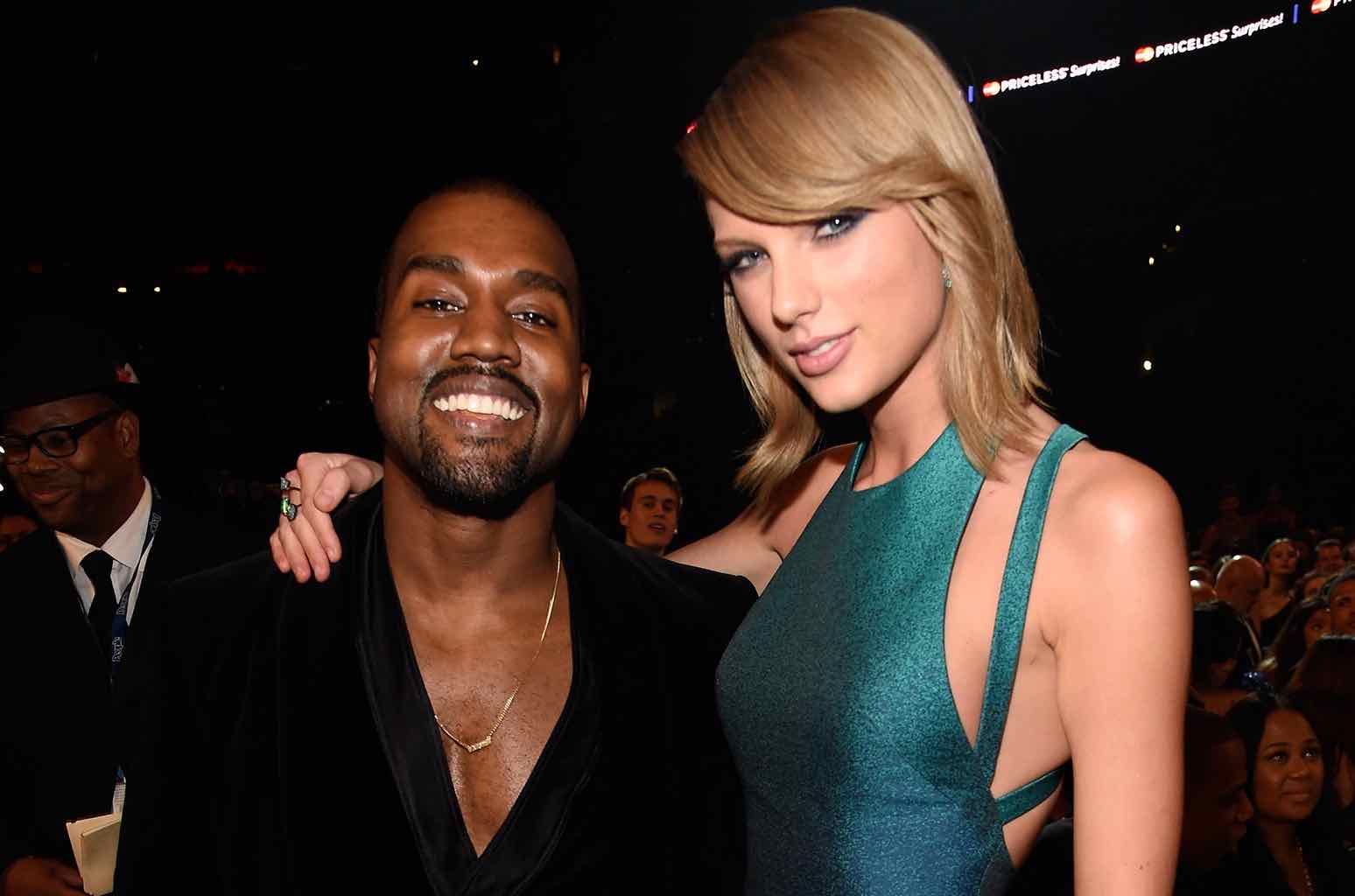 West began into a long Twitter rant in September, explaining how he wants all artists to be “free” from record companies. He specifically referenced Swift, who went into a legal battle with Scooter Braun, a controversial record executive who owns Swift’s music from when she was signed under Big Machine Records. Swift has been trying to get her masters back from Braun since the acquisition in June 2019.

West, however, vowed on Twitter he would “personally see to it that Taylor Swift gets her master back.” Though there hasn’t been any word as to how he’d do it, West claimed Braun was his “friend” and this would be a part of his plan to free music artists from an industry he called “modern-day slavery.”