Is there a map of Jeffrey Epstein’s island? Everything we know

Jeffrey Epstein, the infamous rapist, sex-trafficker, & pedophile, had his own special island which fostered a plethora of illicit activities. In Netflix’s docuseries, Filthy Rich, we got to see inside Epstein’s own personal paradise – a tour showcased many areas of the island’s buildings & beaches.

A hotspot for his sex trafficking ring, Epstein purchased his private island for $7.95 million in 1998 – and it wasn’t afraid of flaunting his riches. In fact, Jeffrey Epstein’s island was frequented by high-profile people (such as world leaders, politicians, & celebrities). 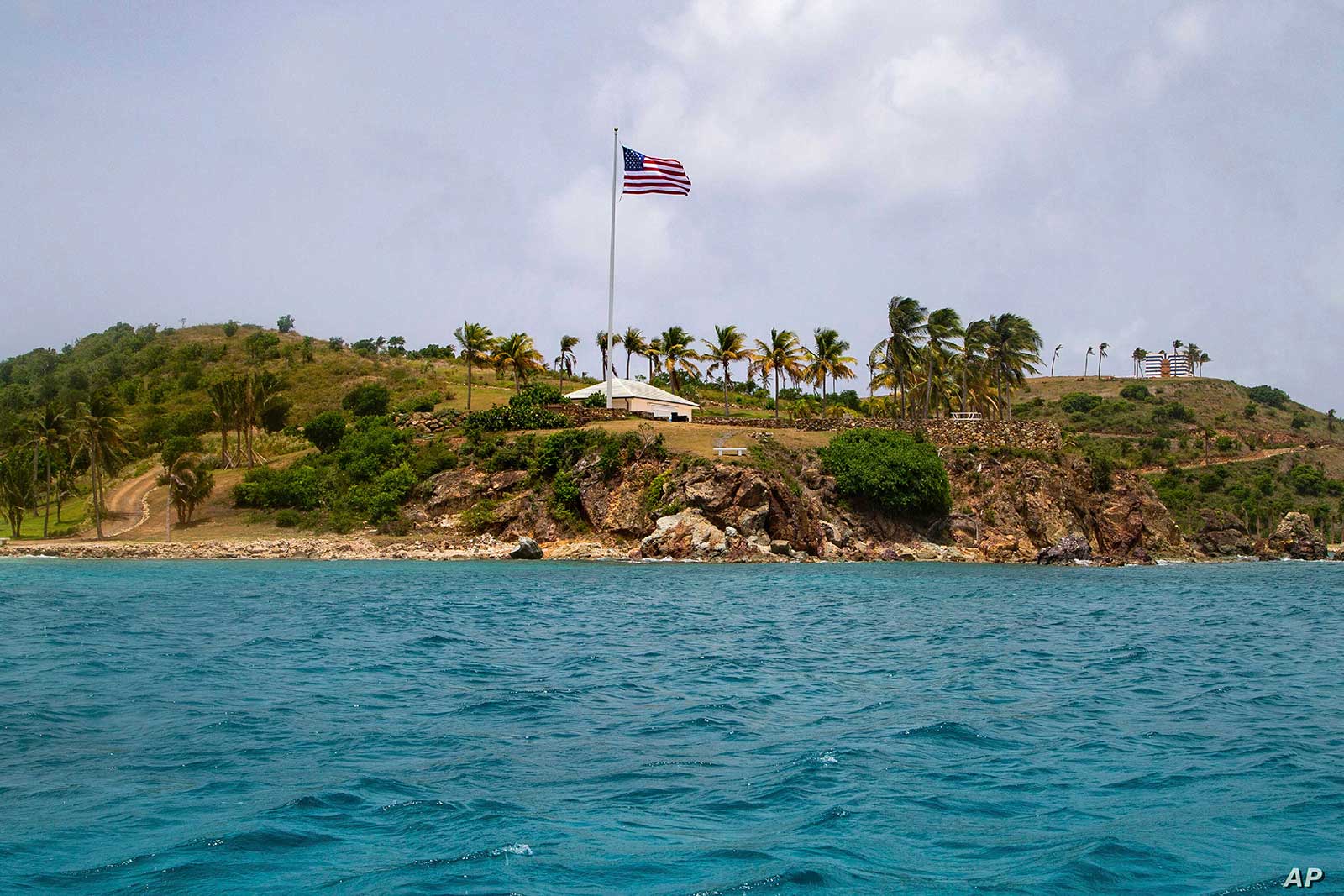 But where exactly is Epstein’s private island and what’s on it? We’ve pieced together in-depth details exploring Little St. James. Here’s what we know about the map of Jeffrey Epstein’s island. 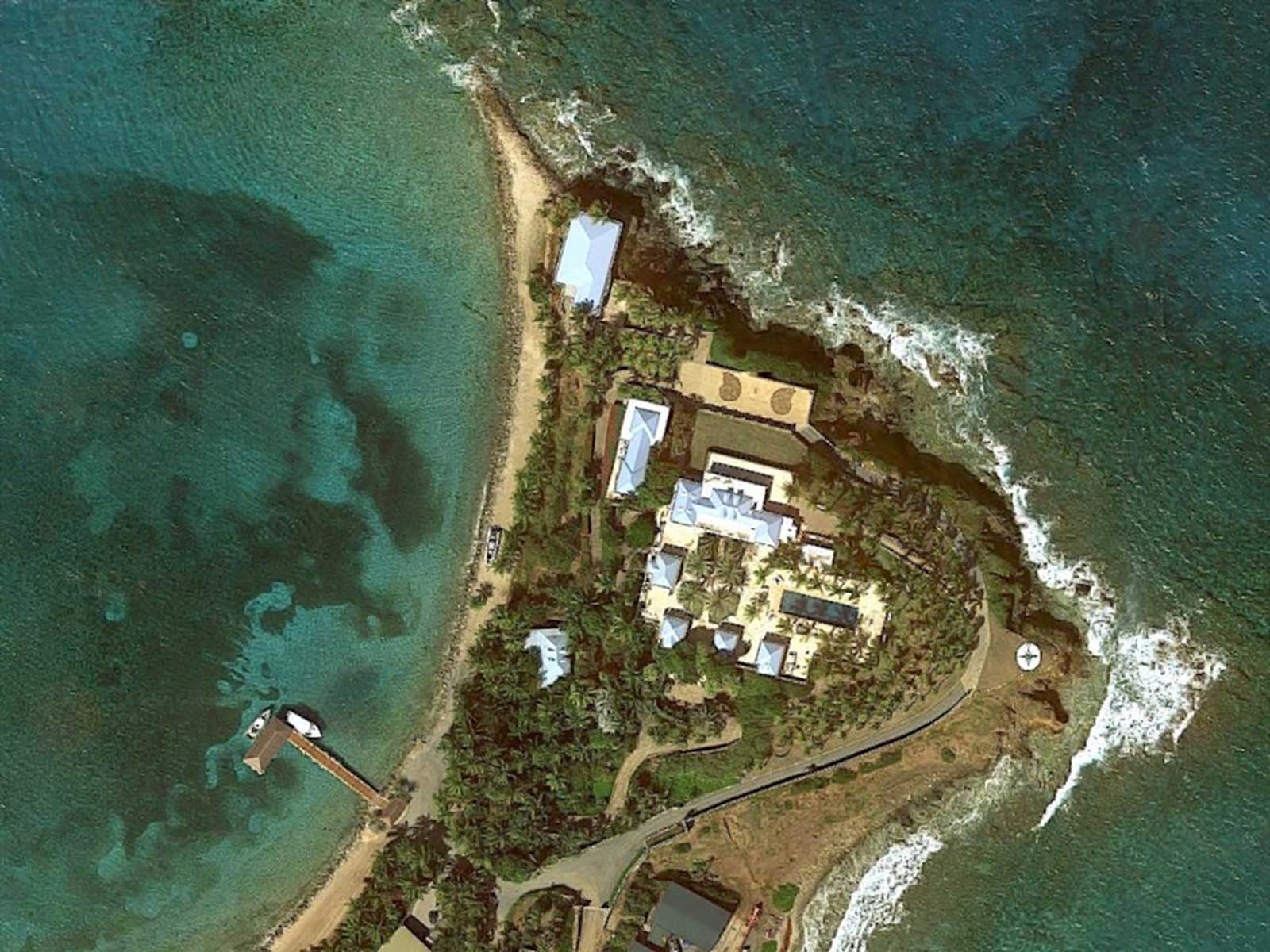 To find Little St. James on the large map, you have to look to the Caribbean Sea. Epstein’s island is in the Virgin Islands right between the two largest islands – St. Thomas & St. John. In order to travel to Little St. James, Epstein would fly into St. Thomas International Airport and fly by helicopter or take a fifteen-minute boat ride.

Epstein went to great lengths to keep the seventy-five-acre island private, spending millions in the process. The villa was designed by Edward Tuttle, who specializes in luxury resort design. In addition, Epstein’s island had many buildings with all kinds of flashy features. 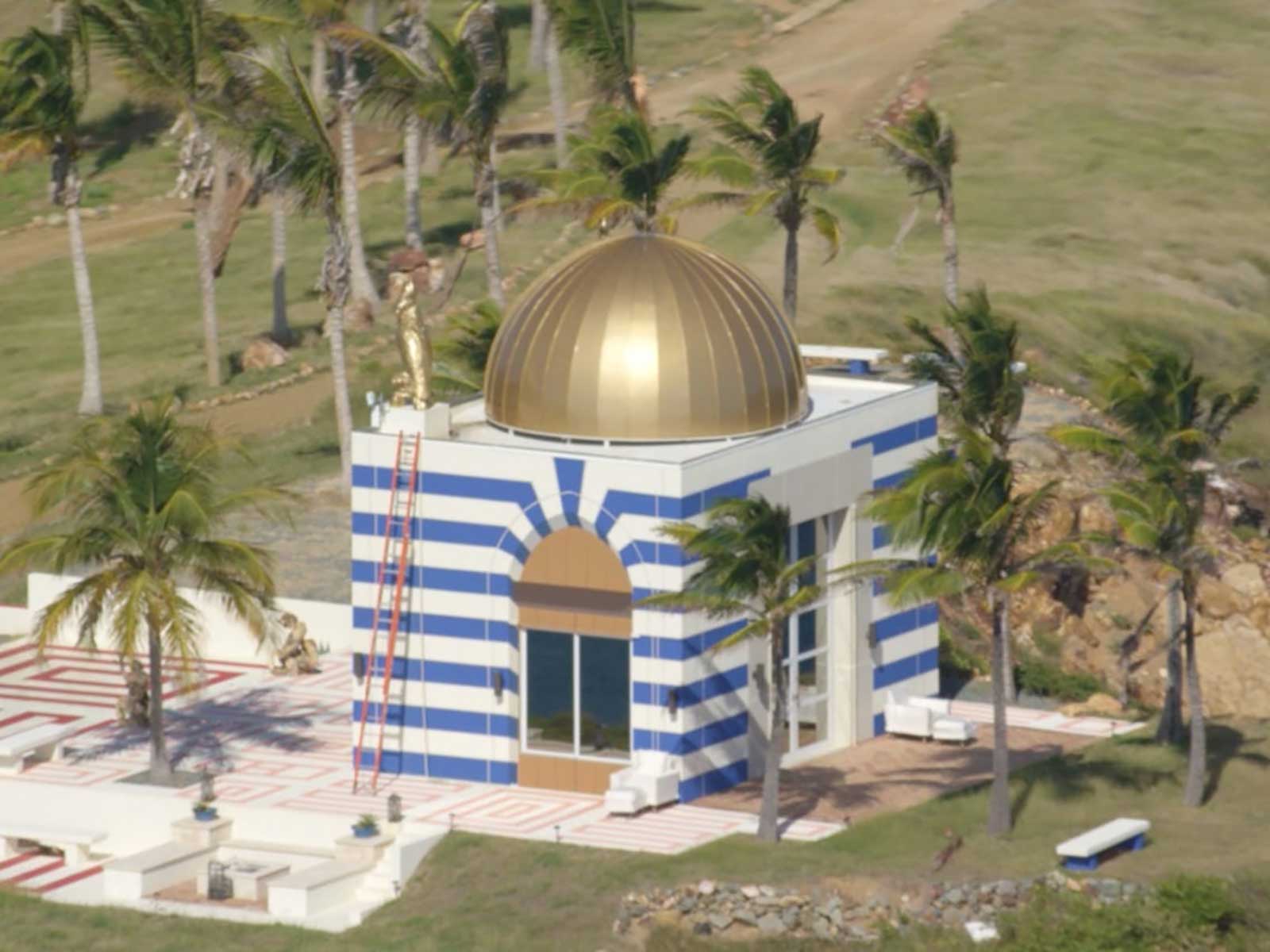 One very notable building on Epstein’s island is a mysterious building that appears to be some kind of temple. While the purpose of the strange temple is widely unknown. Epstein is Jewish – so it’s possible he’d want his own synagogue – but the style of structure makes that seem unlikely.

The base of the temple is painted with broad blue stripes and is capped with a large golden dome. The entrance to the temple is arched with a large wooden door. There are two golden statues in the front – one appears to be Poseidon while the others are perched birds. The terrace out front of it uses a labyrinth motif – even casting a kind of optical illusion. 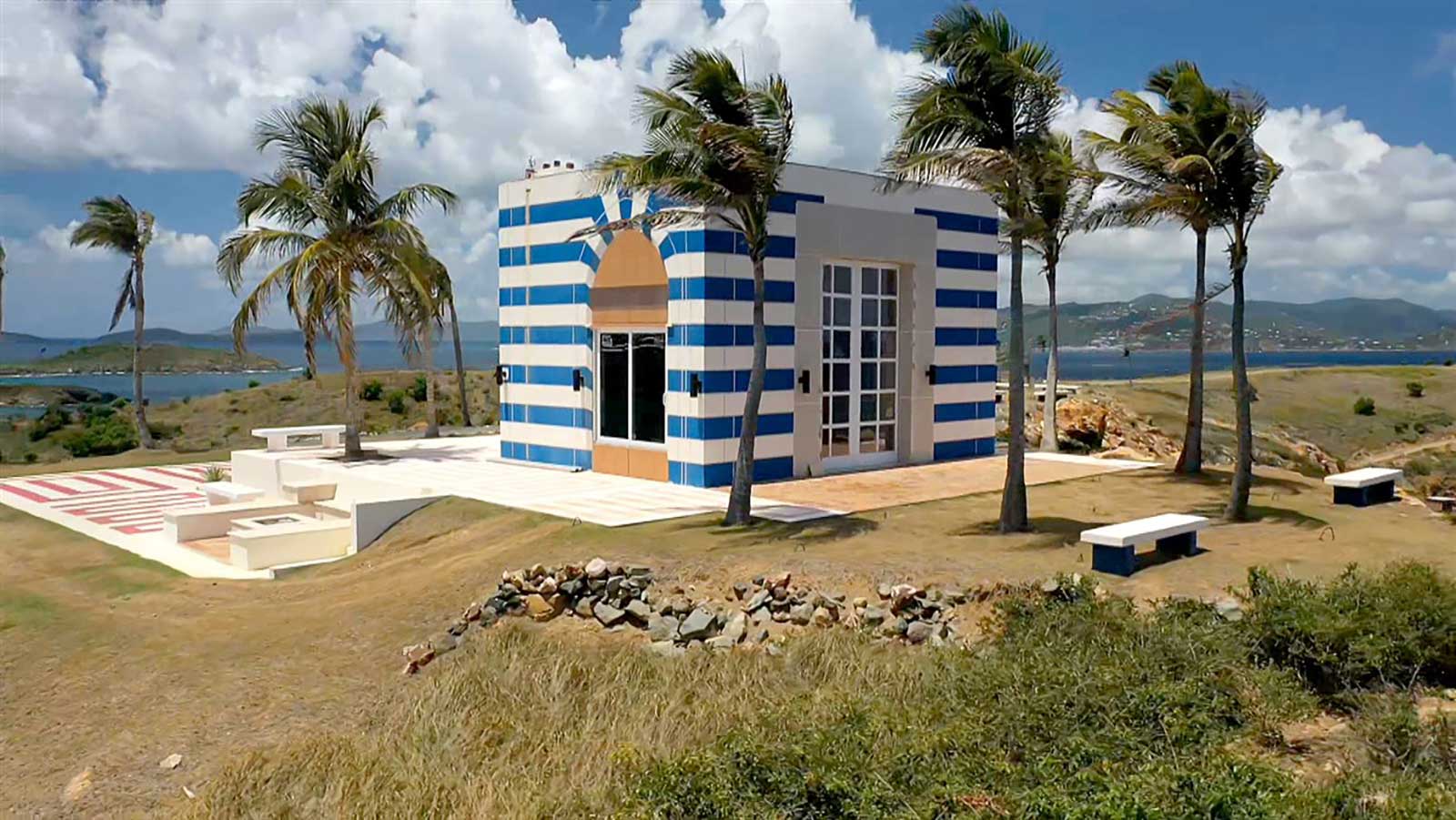 Insider’s J.K. Trotter reported that he actually spoke to a piano tuner who had entered the strange temple. He concluded that the temple was most likely a music room for Epstein who was a classically-trained pianist. Staff also report that it’s a recording studio that is fitted with soundproof walls. However, many wonder why the room would be so far from all of the other structures.

According to the designer of the temple, James Both, the temple has a strange feature. Styled sort of like a castle, the structure has a lock bar across the face of the main door. Usually locks like this are on the inside of the door to keep intruders out but Epstein’s locks are on the outside – as if to keep something or someone inside.

To get an in-depth look at it, two men – Jeff Berwick & Luke Rudkowski – snuck onto the island and captured some close-up footage of many parts of the island. The temple’s windows appeared to be boarded up now. 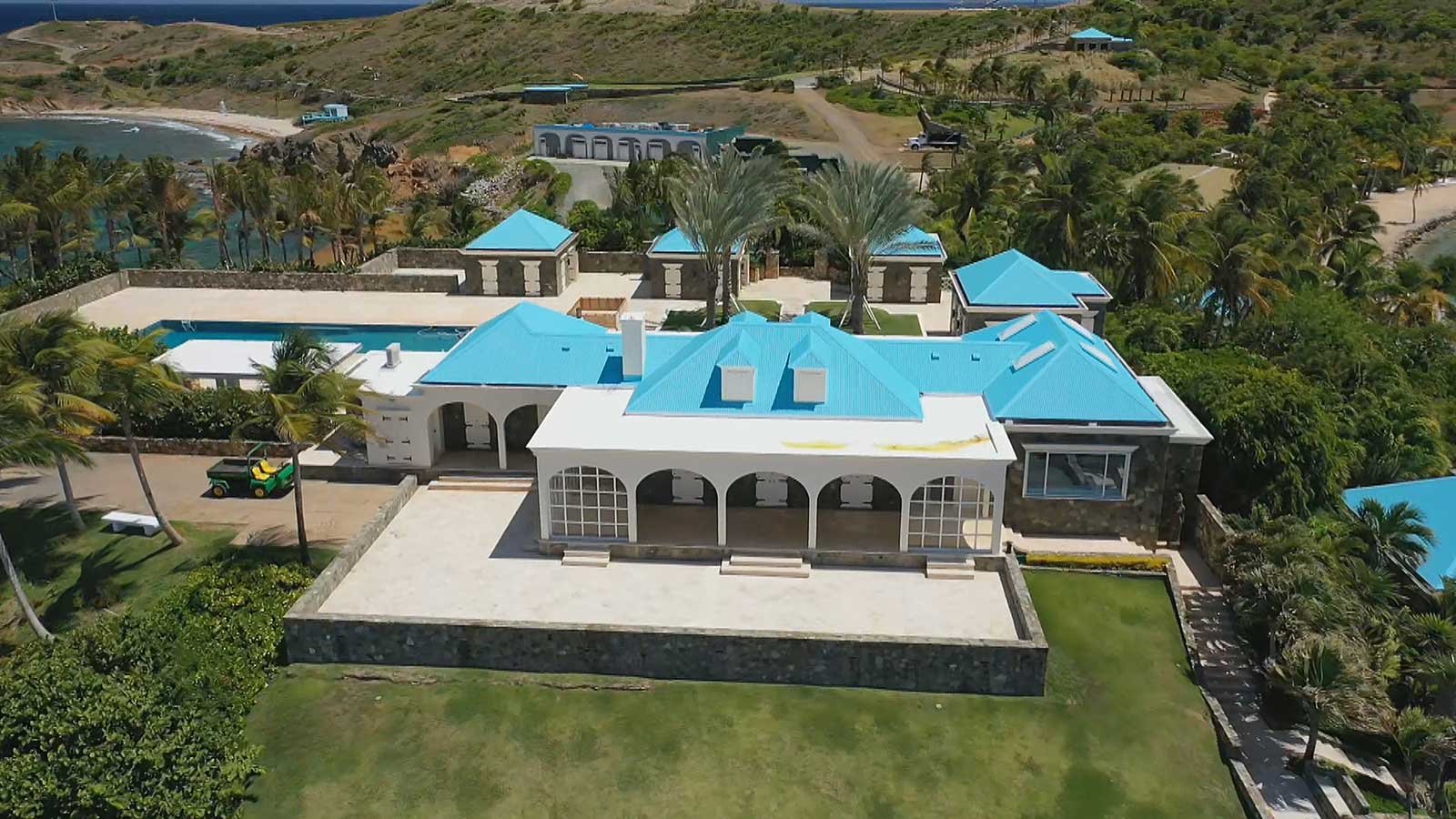 When Epstein went to prison for sex-trafficking allegations in 2007, he used the time away from his island to work on some fancy renovations. In addition to the initial island features which included the main house, three guest cottages, a caretaker’s cottage, & more – Epstein commissioned some major upgrades.

One of these features included an underground movie theater that can be accessed from his living room. Epstein proclaims it to be what he calls a “Ziegfeld movie theater.” He also added a separate library that holds Epstein’s 90 thousand books, and a Japanese bathhouse. 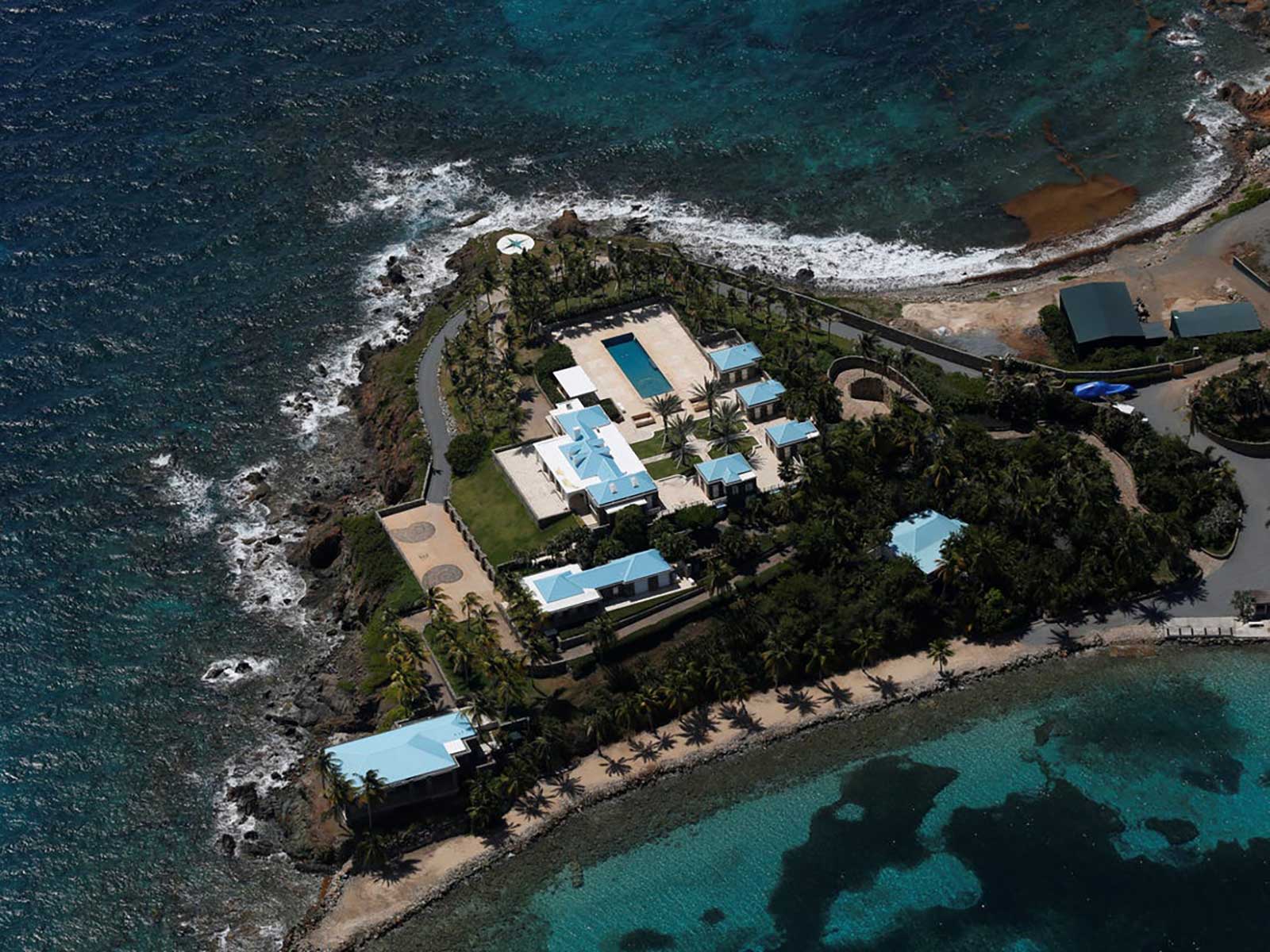 Wanting a fuller picture, someone compiled a map of Epstein’s Caribbean island based on drone footage screenshots. The map gives small descriptions of each of the buildings and offers an in-depth look at the island’s many features.

Revealed on the constructed map of Epstein’s luxury island estate, you can also see a huge helicopter pad, telecom tower, tennis court/parking lot, swimming pool, pond, & fountain. Another strange flag on the map shows a sundial with thirteen colorful benches around the perimeter.

The videos captured by the drone have attracted many who are invested in the Epstein case. The commentators note that some elements of the island reinforce their theories about the island. For example, the estate had small & shuttered windows to hide activities, that occult practices could take place there, that the island hid many tunnels & buried rooms. Some even assert that the island is full of dead bodies.