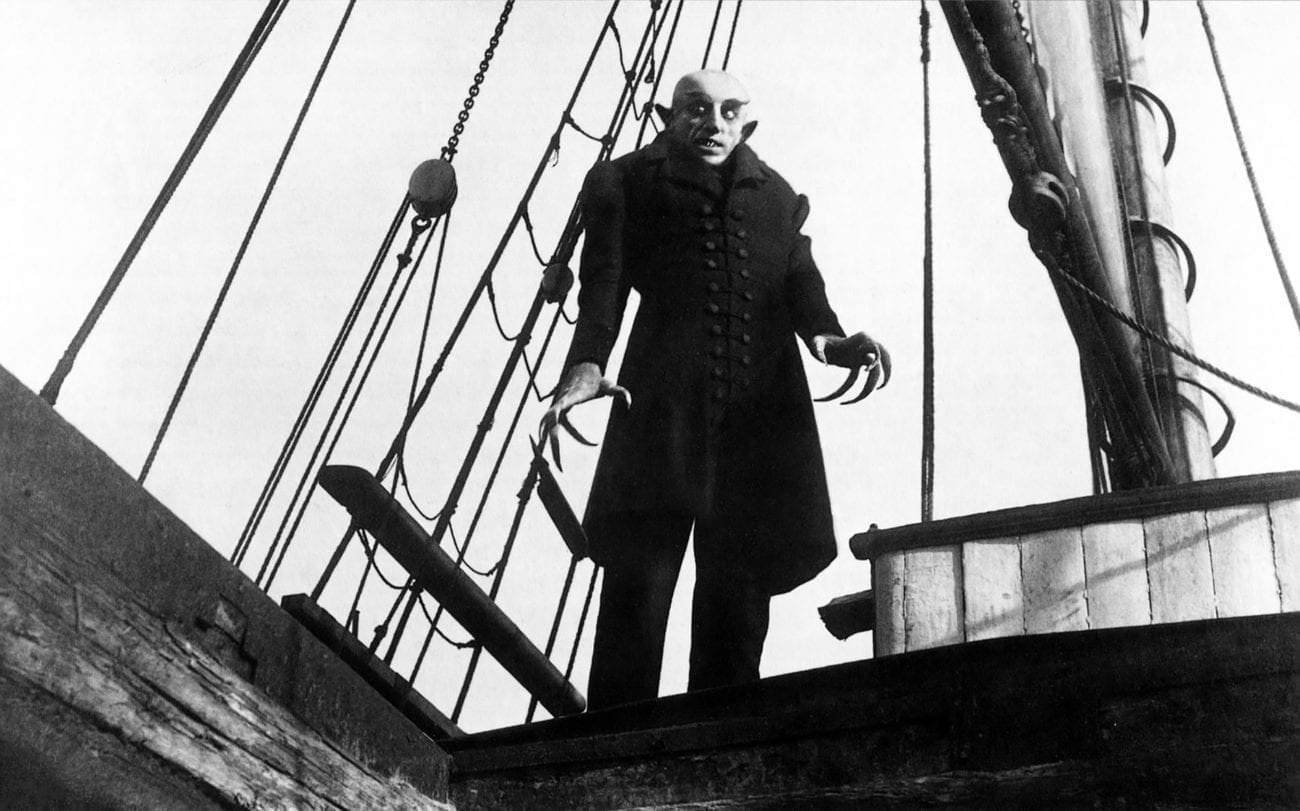 Halloween: Classic horror to chill your bones this season

Wow it’s the film criticism and commentary ghost! That gimmick has returned! What a treat for us all.

? That’s right! I’m about three articles away from getting my own merchandise line! OOOOooooooOOOooOOOOooOOO!

Let’s uh, do a horror film thing then? Like, classic horror films or something.

? Horror has always been a socially and politically provocative genre. I think it’s well worth a look at the core canon that comprises the principal inspiration for modern horror films.

Wowzers! You know your stuff.

? I assume I’m now an immortal incorporeal being so there’s not much to do besides read film criticism. Oh and scare people.

This 1922 German expressionist flick is a silent but spooky look at ancient vampire Count Orlok. Max Schreck is in the starring role, and although there’s no sound, there’s still an evocative power to the picture. It’s a weirdly immersive film that’s worth reading up on. True film aficionados have probably digested this already but, despite its age, there’s some incredible and neato work done with shadows here. Well worth checking out, and some fairly good spooks to be enjoyed.

? Nosferatu was an unauthorized adaptation of Bram Stoker’s novel Dracula. The Stoker estate entered a legal battle with the producers of the film, and those legal battles about adaptation and rights to content formed the legalistic conversation for the rest of the century.

It’s not just a milestone of a cinematic accomplishment, but its significance extends to the rules of cinematic adaptation itself.”

No, not the David Bowie song. This 1942 horror film is when absurdist horror and sexual exploration collide. It follows a spooky story of a young lass named Irene who believes she can turn people into cats when provoked. It’s often a silly film, and hasn’t aged all that well, but there’s still a few scares here and there to satisfy your horror appetite.

? The ‘Lewton Bus’ from this film has been a mainstay of horror films ever since. Named after the producer, Val Lewton, it’s a technique that shows a character in surprise. Here it happens when Irene looks shocked and terrified by what sounds like a hissing panther, before cutting to show it’s just a bus arriving. It’s what’s used as a basis for most ‘boo!’ moments in horror film history.

The Fly was originally a 1958 film from Kurt Neumann. It’s about a scientist whose DNA is fused with that of a fly when an experiment goes wrong. The legendary Vincent Price (House of Wax) shows up in this and is pretty fun. It’s a pretty horrifying film, although some of the make-up is hit and miss. The 1986 remake starring Jeff Goldblum (Jurassic Park), and filled with revolting imagery from the mind of David Cronenberg, is probably the superior specimen.

? The Fly has an incredible sequel called The Spider.

? I’m a twelfth dimensional being, I can’t be tied down by your petty perspective of time as a linear construct. Also, they stop producing Twinkies in the next decade.

Frankenstein is a 16-minute short film from 1910 that is adapted from the Mary Shelley novel about a guy who procrastinates for a bit before rebelling against God in creating life. It’s filled with a radical departure of a story from the original novel. The monster here actually follows around the young doctor for a bit like a dog, before things get really spooky. You can watch the whole thing on YouTube as it’s in the public domain. It’s more an artefact of film history than anything else.

? Frankenstein is one of the greatest ways in which you can chart the evolution of filmmaking and Hollywood history. The character has been adapted tens upon tens of times. He’s an immortal character whose longevity displays how universal the themes attached to him are. The existentialist questions, the philosophy and, of course, the monster’s visage itself.

Whether it’s Alvin & the Chipmunks Meet Frankenstein or the 1931 film with Boris Karloff, with nuts and bolts in his neck, Frankenstein is a transcendent being. Almost like me. But not quite.

The Night of the Hunter

This 1955 thrillride, from Charles Laughton, is about a minister turned sinister serial killer. With Robert Mitchum (Cape Fear) in the lead role, it’s a thriller from the tip-edge of the black-and-white edge of Hollywood, but it’s a seriously psychological incision of a film. It puts you deep in the heels of this bloke as he goes about seducing widows and destroying lives. There’s a lot of commentary at play underneath this flick, and many critics even consider it to be in the same league as Citizen Kane!

The Day of the Triffids

This 1962 film adaptation of John Wyndham’s novel is about killer plants that come to bite us in the butt. And by butt I mean slit our throats and eat us whole. Get spooked! It’s a real treat of a special effects show-off, although some of it looks more silly than scary. With ecological disaster and climate change constantly appearing in the headlines, one could argue that Triffids is even more of a prescient film.

? In 2009 a BBC miniseries took to remaking this story in all its horrific glory. We think it’s much more of a hard-hitting take. There’s some VFX work and weird narrative choices with Eddie Izzard showing up and immediately declared dictator. I mean, that would happen naturally in this situation of course, but the odd thing is that this adaptation is much more powerful.

Because, spoilers, humanity actually loses in the end of the miniseries. Our heroes are left in exile. It’s much more scary because there’s no salt water solution, as seen in the original film. We fail, as a species, to combat our changing climate. GET SPOOKED!

Night of the Living Dead

The keystone of the entire zombie genre, George A. Romero’s horror film masterpiece painted a picture of 1968’s America as a place in peril. Locked into a consumerist culture and an unpopular war, the film struck a chilling chord with audiences in depicting the true monsters as mobs of people skulking about, wide-eyed, not too different to them. Ooooh! Spooky! It’s the foundation for everything from The Walking Dead to 28 Days Later.

? The film was hilariously and immediately released into the public domain because the original distributors failed to put copyright logos on the first print. That’s why this film is peppered everywhere, and seen in all sorts of shows and films, because it costs nothing to display it. Hooray for weird copyright law!

This 1941 film is the prime influence on werewolf flicks. It’s also been an inspiration to much make-up work for horror films throughout the twentieth century. Bela Lugosi (Dracula) shows up in a supporting role in this one. It’s still a pretty fun film even by modern standards. Check it out! It’s very good!

See it’s just not funny when you do it.

Creature From the Black Lagoon

Here’s a blast from film gimmick past! James Cameron (Aliens) wasn’t the first pioneer of the 3D film genre, oh no, in fact he was resurrecting a trend that keeps raising its ugly head every couple of decades. Creature From the Black Lagoon is a 1954 film about a spooky monster in the depths of a lagoon who terrorizes some academics, before proceeding to do some underwater shenanigans. It’s a lot more fun than it sounds and, at the time, audiences were utterly terrified wearing their 3D viewing glasses, as they were swallowed whole into the screen! Spooooooky!

? Creature From the Black Lagoon is one of the last remnants of the 3D film fad in the 1950s. Many audiences actually saw this film in flat 2D when it was released. Some of the prosthetics work is a bit silly. But it’s weirdly charming in its own way.

Yeah! Eat your heart out Marvel! This 1943 horror flick sees two of Universal’s biggest monster movies collide. It’s a real display of, get this, a cinematic universe! Characters from solo films combine into one big meet-up flick. Woah! What a novel idea! Although this 1943 film is a little bit too silly to get any spooks out of you, it’s a solid prediction of the future of filmmaking.

? Universal is trying to capitalize on the current trends from Marvel and whatnot. The Mummy was apparently the launch of their own monstrous film universe. Dr. Jekyll even shows up. I’m still waiting for them to do cinematic universes based on Stop Or My Mom Will Shoot! or Barney’s Great Adventure.

Still waiting? But I thought you exist across all of space and time?

? Yeah but I don’t want to be spoiled anything. Like, imagine if I told you they remake Blade Runner with Michael Cera as the lead.

? And it turns out it was all a dream at the end.

An absolute cursed film. This 1973 flick from William Friedkin (Killer Joe) had an incredibly troubled production. Injured toddlers, Kubrick’s exit, and sets that spontaneously caught fire. The result is a tremendously frightening film that delves deep into every corner of horror. It’s a hypnotic thrill-ride that really puts you in the room when the exorcisms begin and the horror is dialed up to eleven. We’ve had nightmares about this flick, because gee-wiz is it scary.

? Know what else is scary?

? Aw. You guys spoil everything.

Hah! We’ve defeated you! Haha! Spooky film criticism ghost, you are banished! There’s nothing you can do or say that’ll scare us!