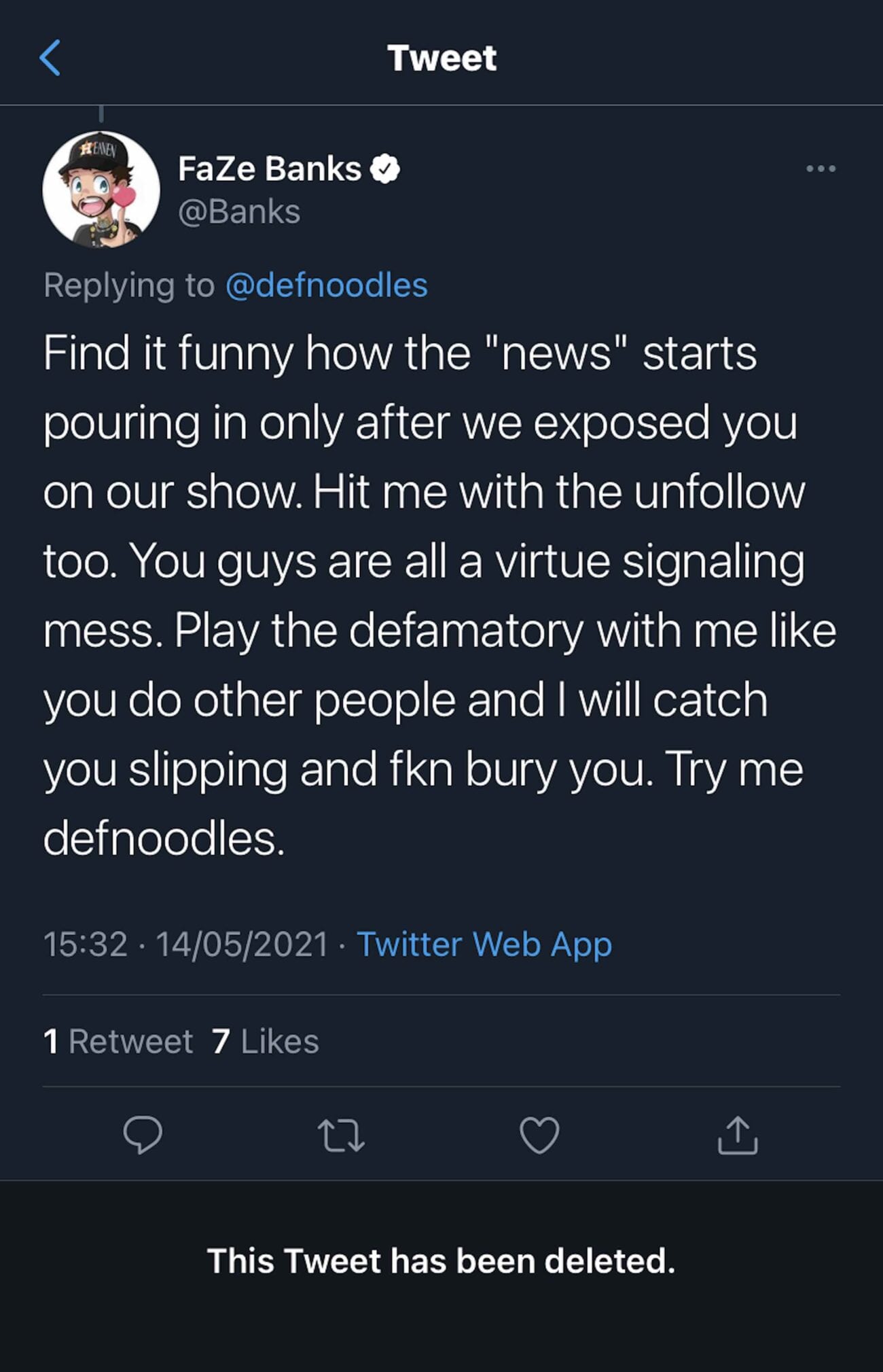 Did Faze Banks shame Adam22 on his podcast? Watch the creators clash

Any platform you look at, from YouTube to Twitch to podcasts, seems to always have its share of beef. In this case, the beef comes from the thick tension between e sports podcaster FaZe Banks and pop culture podcastor Adam22 after Adam22 interviewed FaZe Banks on his channel No Jumper on May 13th, 2021.

Adam22 was discussing several recent topics with FaZe Banks and Mike Majlak, including Banks’s departure from Jake Paul’s latest project – then, things got heated. Naturally, Twitter had quite a bit to say about the confrontation as well as the arguments used in the interview.

But what really happened and why did Adam22 get slammed? We listened in and found out a bit more about the conflict as well as the best reactions to the episode. Grab your headphones and dive into the clash between FaZe Banks and Adam22.

CALL OUT: Trisha Paytas and Ethan Klein are bullies, according to Mike Majlak. Adam22 tries to defend Trisha saying they're a good person, Faze Banks and Mike shame Adam for making OnlyFans content with Trisha. Banks later goes on to say "I like Jason Nash a lot." pic.twitter.com/LJp8QaE2Uu

This whole conflict can be summed up within a forty-second clip (that says alot about the internet these days, doesn’t it?) The conflict seems to have stemmed from one specific conversation the two had within the two-hour episode when Mike Majlak called out both Trisha Paytas, who is also a famous YouTuber who has recently been outed for racist remarks they made on Twitter, and Ethan Klein, a reaction YouTuber.

Majlak was specifically calling the two out for being bullies online. FaZe Banks seemed to agree with Majlak about his assessment, but Adam22 argued that Paytes was actually a good person, as he had worked with them in the past. The other two shamed Adam22 for his defense, especially as the content he had made with Paytes was for OnlyFans specifically.

But the biggest part of the tension came later when Banks went on to say how he liked Jason Nash. Nash is also a YouTuber who worked with David Dobrik and was formerly Paytes boyfriend before the two split. Naturally, Banks’ double standards were noticed by many in his audience.

Banks and Mike associate with fucking Keemstar. Literally the internet’s most notorious bully.

Many who saw the interview took to Twitter to voice their opinion on the newfound beef between the two YouTubers as well as picking apart their arguments. The best of these reactions include:

That guy mike is so aggressive.. I do not like the energy he gives off. But don’t call out people for bullying/judgement when you are gonna do it in the same breath.

Yeah that is a bit of a paradox, isn’t it?

I used to think Mike was the voice of reason for Logan. I now believe Logan has outgrown Mike and Banks is a terrible influence. Mikes behavior of late is gross. He wants to blame drama channels but maybe he should check his behavior.

We agree that the YouTuber doth protest too much . . .

coming from some of the most problematic ppl

Alright, right to the point.

Their set is so ugly? Where are they? Jail?

You guys are really going for the low blows here!

Mike saying he likes Jason nash a lot, makes me wonder if he likes to engage in the same questionable behaviour that Jason does…

So they condemn ‘bullies’ by…being bullies. Right. Big brains right here. And where are they ffs? They look like they’re about to get out of prison on furlough.

Yeah, the big brain energy is not strong here.

Imagine going on as a guest on someones podcast and shitting on their friends and shaming them for making content with somebody? This dude just wants to be talked about on frenemies..

That is pretty rude if you think about it, to be honest.

The voice is the kid in school who lost their voice, but insists to continue to talk just to show off their voice is strained.

*holds up hands* Guys, can’t we talk about this?