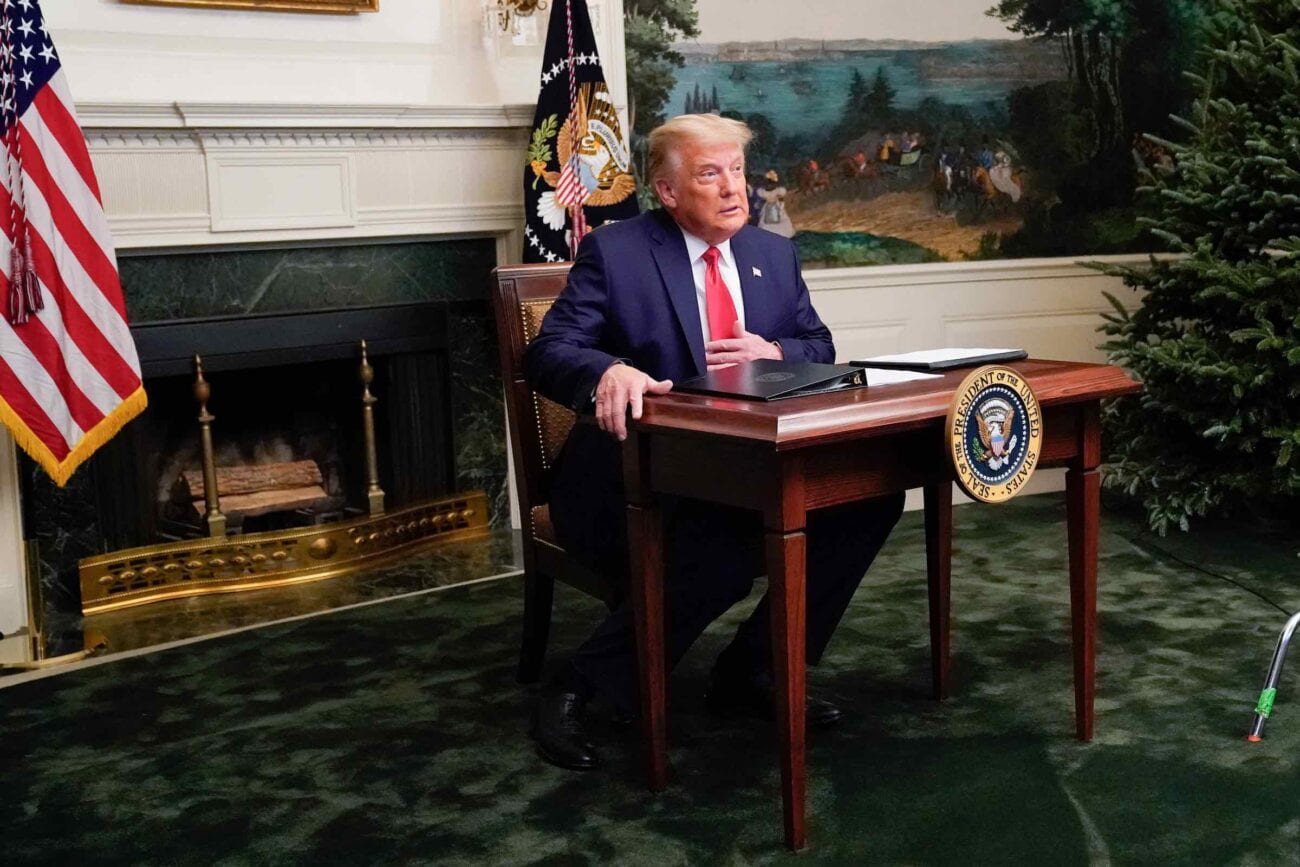 Is Donald Trump accepting the election results? All the latest news

Rather than accepting the election or conceding to Joe Biden, President Donald Trump continued to claim voter fraud, which has repeatedly been disputed by election officials, various Secretaries of State, and even Homeland Security. In his Thanksgiving Day remarks, Trump finally took questions from reporters but things quickly got heated when they pressed Trump on whether he would finally concede following the Electoral College vote.

Instead, Trump disregarded a majority of the questions and repeated his allegations of voter fraud. Trump said, “You’re going to find tremendous fraud. You’re going to find fraud of hundreds of thousands of votes per state”. While AP recently reported Biden received over eighty million votes in the election, Trump said there was “no way” Biden received that many votes, saying the only way is if there were “massive fraud”.

While most people are talking about the question & answer portion of the event, Trump started the media event by saying happy Thanksgiving to troops in Bahrain & Kuwait. At the time of the conference, it was just after 1 a.m. in their time zone. Here’s a breakdown of the unusual Thanksgiving Day remarks and the viral trends that came after the tumultuous event. 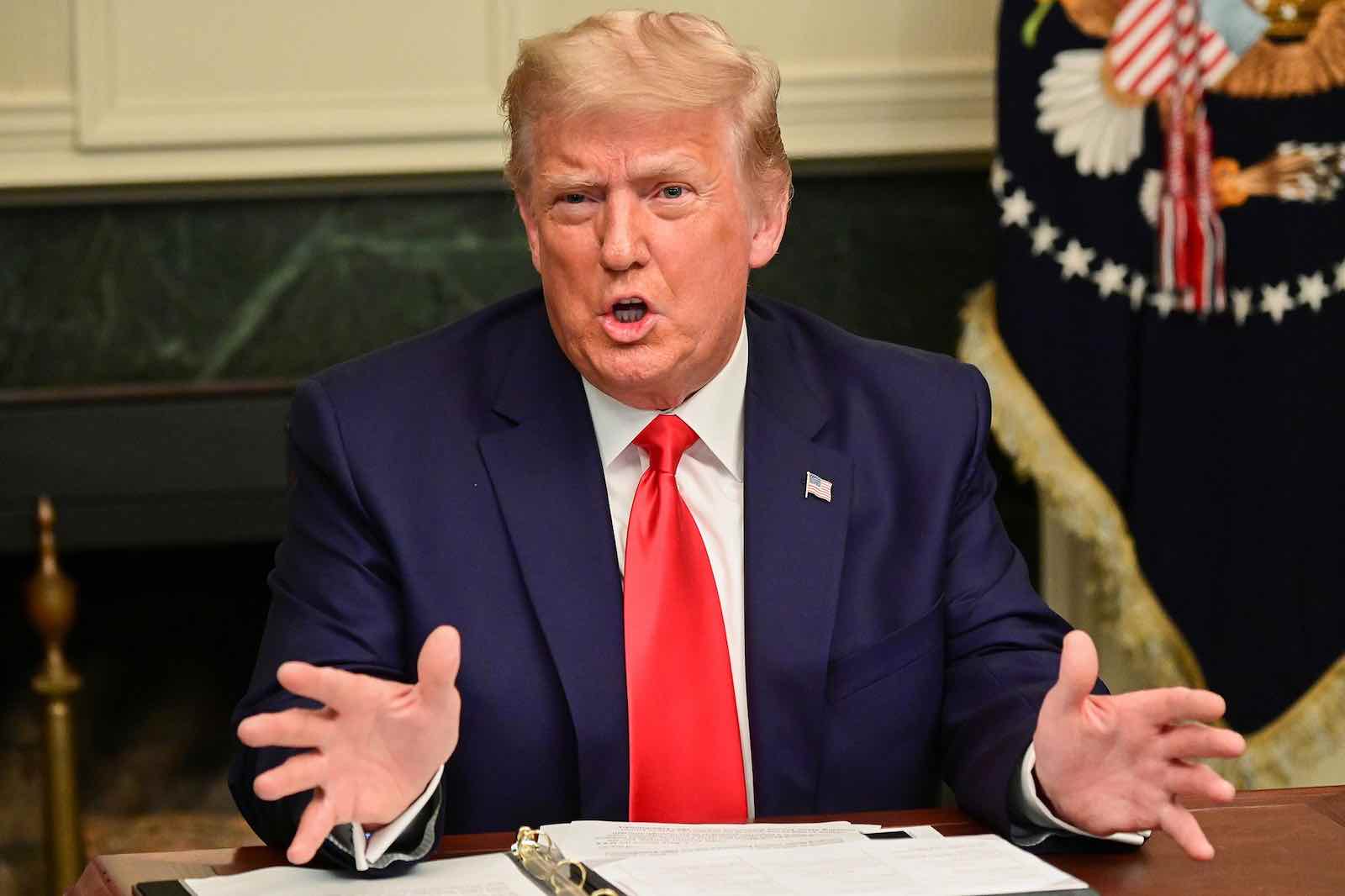 No, he isn’t accepting the results

After weeks of not answering questions from reporters, Trump finally took questions during his Thanksgiving Day remarks. He answered questions with his usual rhetoric, claiming the 2020 presidential election was a “fraud” & a “rigged election”, claiming dead people voted in the election, and telling people to “look at the numbers”.

Election officials have repeatedly said there is no evidence of fraud and Homeland Security said in a statement, “The November 3rd election was the most secure in American history”. However, Trump repeatedly claimed voter fraud happened and called the U.S. a “third world country” because of the way we vote, but there hasn’t been any legitimate evidence of voter fraud.

Trump regularly talked about Michigan, Georgia, & Pennsylvania, claiming there were “glitches” and officials had to “look at the signatures” to find fraud. Trump also said, “We caught them cheating. We caught them stealing”. However, even after many states have already certified their votes, Trump believes there was voter fraud, despite the evidence to the contrary. 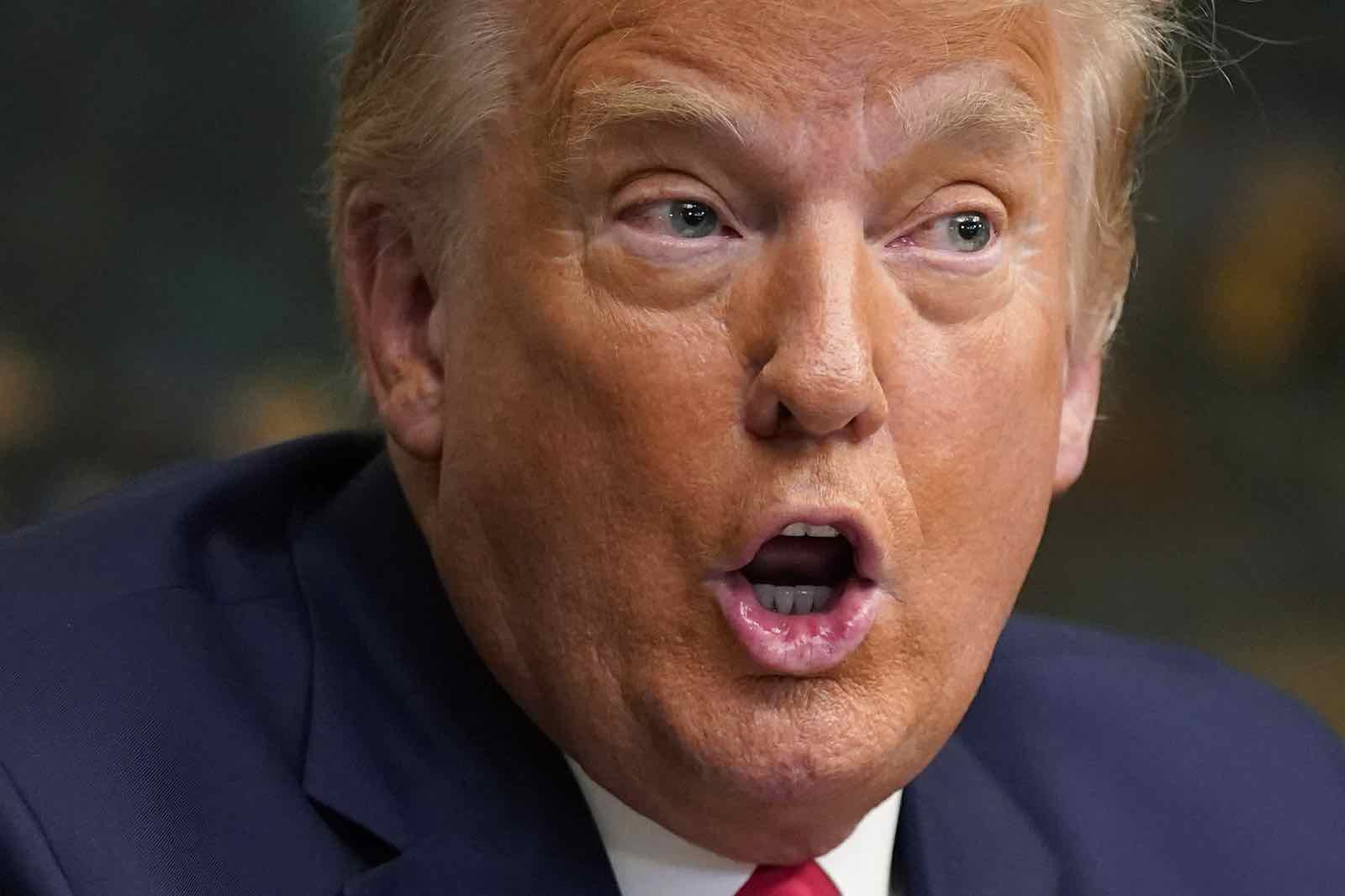 Waiting for the electoral college?

At one point a reporter asked about the electoral college, to which Trump responded, “it’s going to be a very hard thing to concede because we know there was massive fraud”. Later, when asked if the electoral college vote went to Biden if Trump would concede, Trump said, “Well, if they do, they made a mistake”.

With Trump’s history of not taking a loss well, some have speculated Trump would refuse to leave the White House even if Biden was inaugurated in January. When asked whether he would leave the building if the electoral college vote went to Biden, Trump said, “Certainly I will, and you know that”.

Trump’s latest remarks came after a reporter asked about whether he would attend Biden’s inauguration, should Biden win the presidency. Trump said he knows the answer, but wouldn’t reveal it because of his claims of voter fraud. 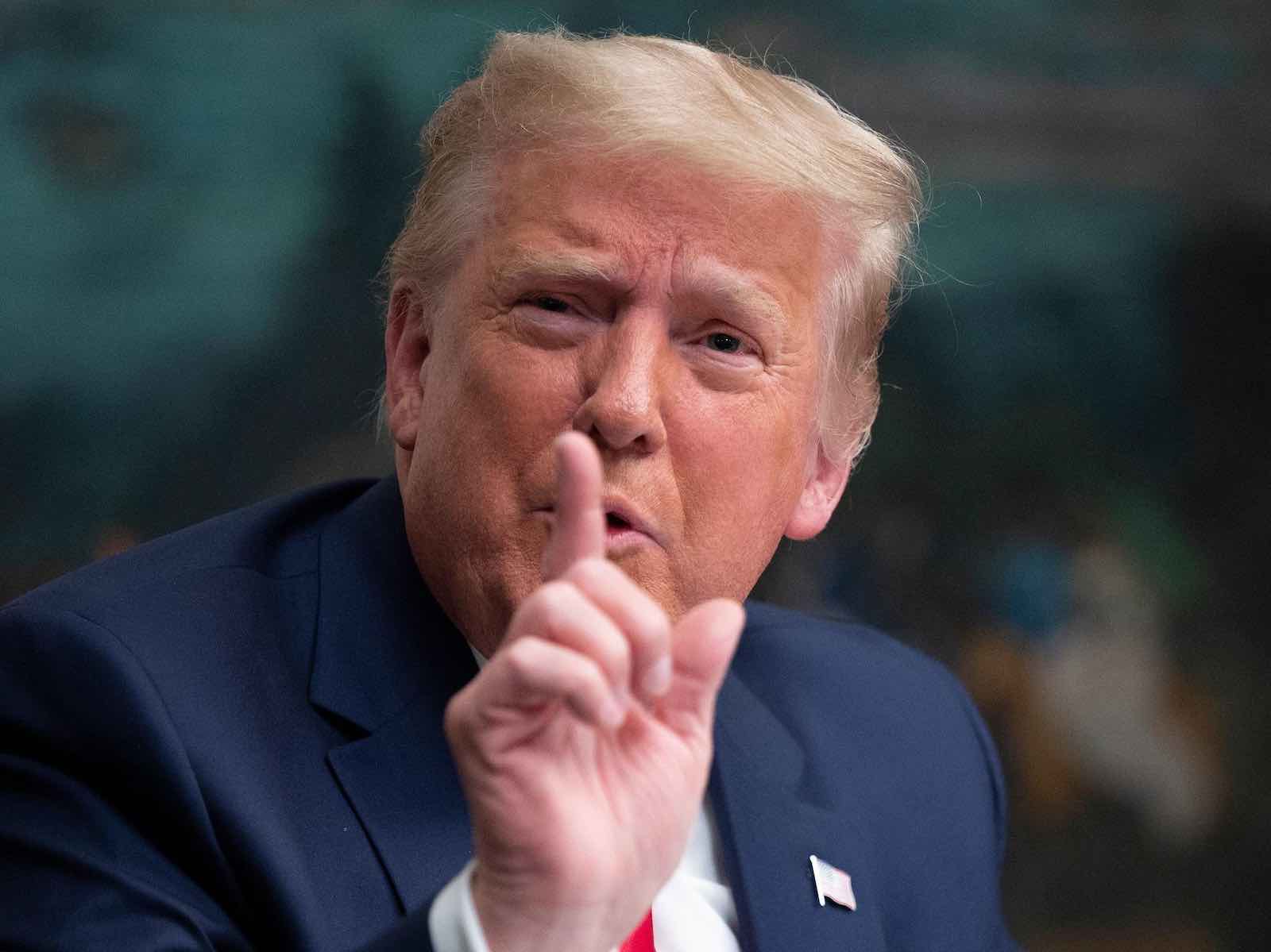 Getting heated with reporters

When a reporter pressed Trump about the electoral college, Trump started to get particularly heated. He said, “Don’t talk to me that way, you’re just a lightweight”. Trump had previously called one of the Democratic nominees for the Georgia Senate runoff race a “lightweight” in the same conference.

Even more, Trump said, “I’m the President of the United States. Don’t ever talk to the president that way”. He proceeded to stop taking questions from the reporter, who was later revealed to be Jeff Mason, the White House Correspondent for Reuters, and Trump immediately switched to another reporter.

When Trump later abruptly left the room, reporters started flooding Trump with questions. Trump took none of them. In the closing seconds of the broadcast on C-Span, the room was silent when two reporters made the following remarks: “Isn’t this the language of a dictator?” and “Mr. President, some people are saying you’re denying reality”. 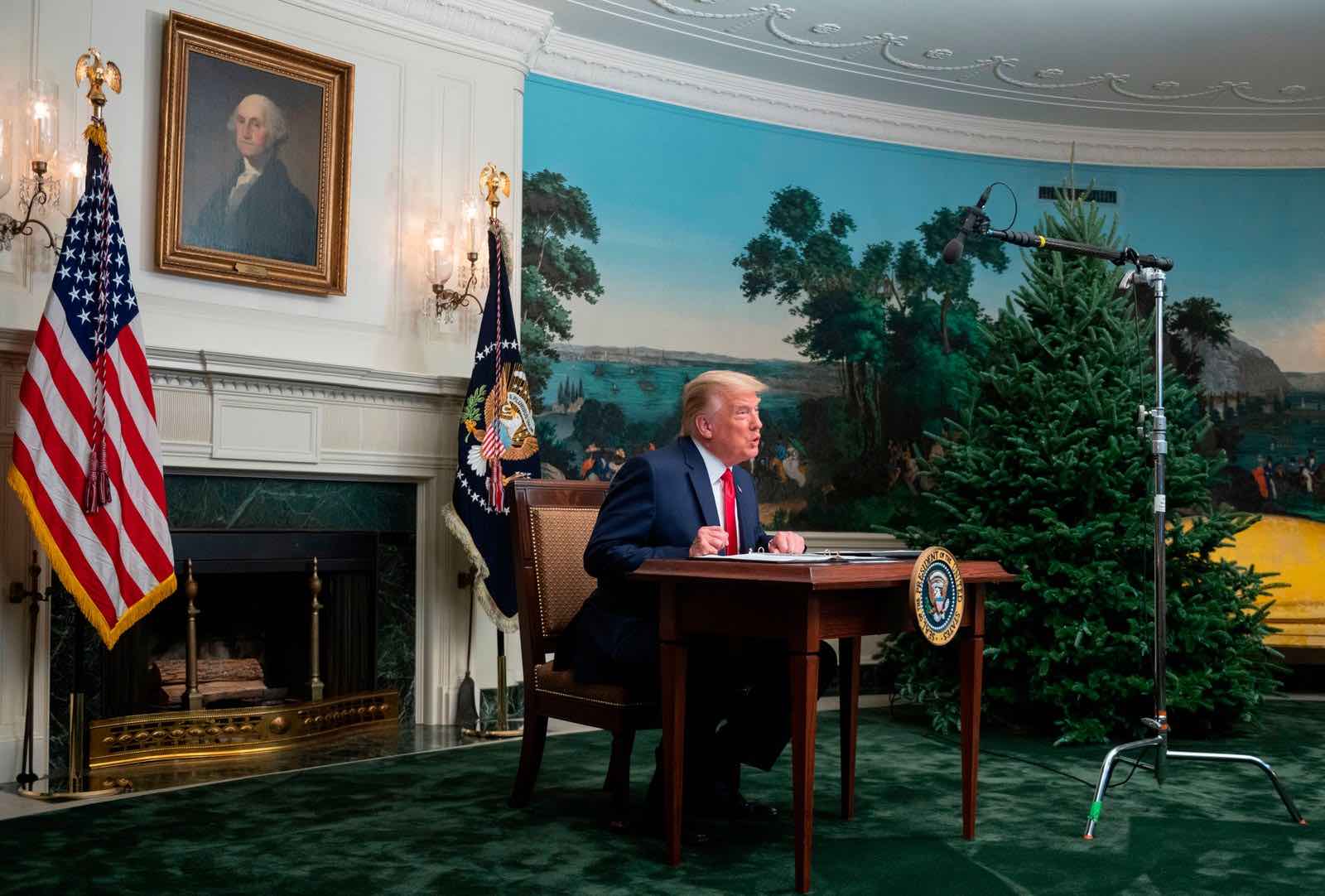 The spectacle went viral on Twitter as many people wanted to voice their opinion about Trump’s answers. Before long, #DiaperDon became the number one trend on Twitter. Not too long after, the president wrote on Twitter, “Twitter is sending out totally false ‘Trends’ that have absolutely nothing to do with what is really trending in the world. They make it up, and only negative ‘stuff’.”

In the same tweet, Trump claimed there was “big Conservative discrimination” because Twitter’s choice of trends. While Trump didn’t say anything about #DiaperDon, it seems to be the likely culprit since it’s a trend critical toward Trump. In another tweet, Trump claimed Twitter trends are a threat to the United States, writing, “For purposes of National Security, Section 230 must be immediately terminated!!!”.

Section 230 was a 1996 law, protecting websites from being sued for user content, according to the Independent. The news outlet stated if the law were to be changed it would “fundamentally change how the internet works”. 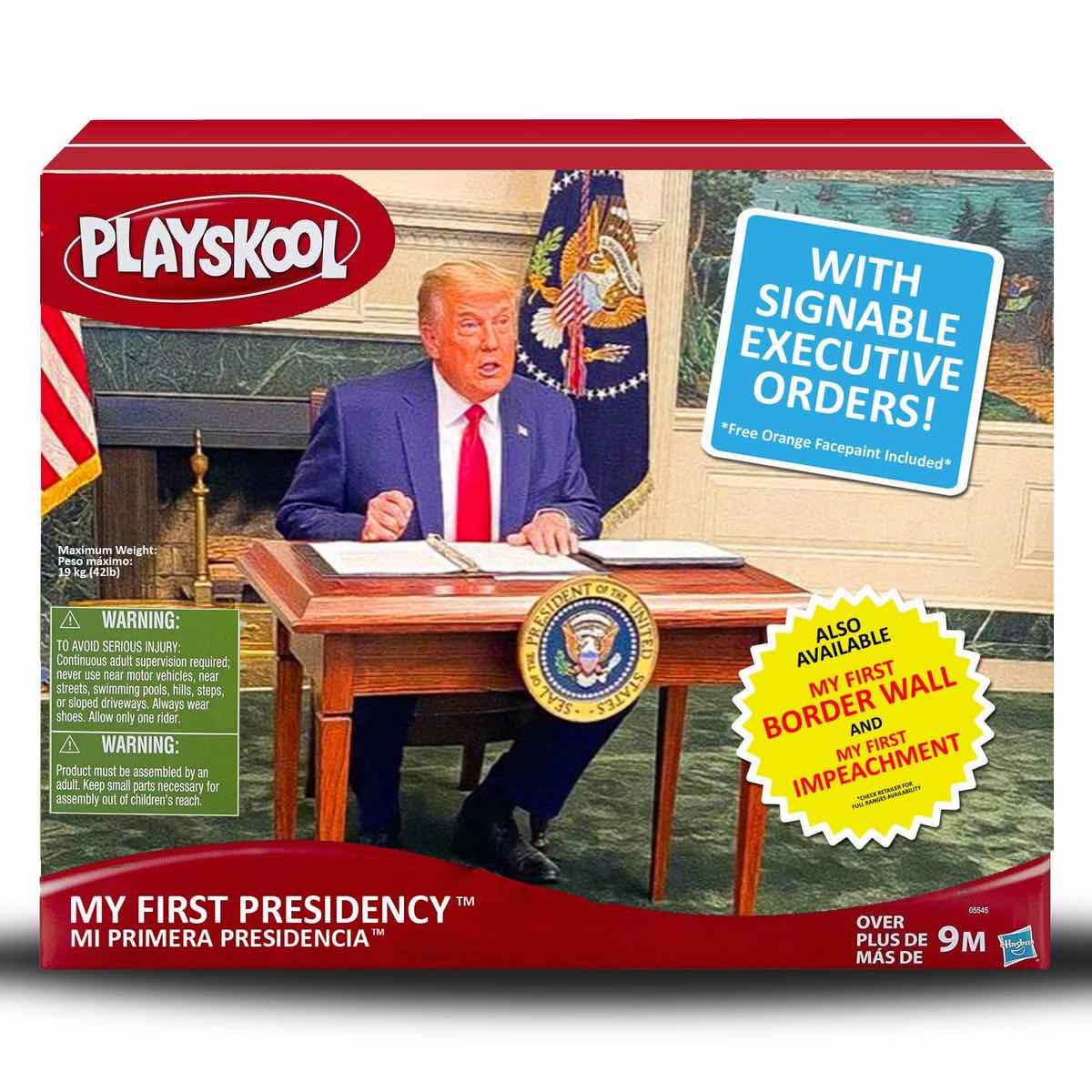 No, it’s not NPR’s famous “Tiny Desk” series which brings famous & underrated artists to perform acoustic versions of their favorite songs. It’s actually about the desk Trump chose to use for the event. People on Twitter were quick to point out Trump wasn’t using the formidable Resolute desk for the conference but instead used a smaller desk with a large Presidential Seal on the front.

A photo of Trump at the smaller desk went viral on Twitter and people went wild with Photoshop. With all of the viral memes & photoshops, before long, #tinydesk started to trend alongside #DiaperDon. Many compared the desk to children’s furniture and one user photoshopped the table onto a Playskool toy box, calling it “My First Presidency”.

The desk in question has been used before, but the desk is primarily used in photos with a group of people behind the desk along with the president. In this news conference, Trump was alone the entire time.