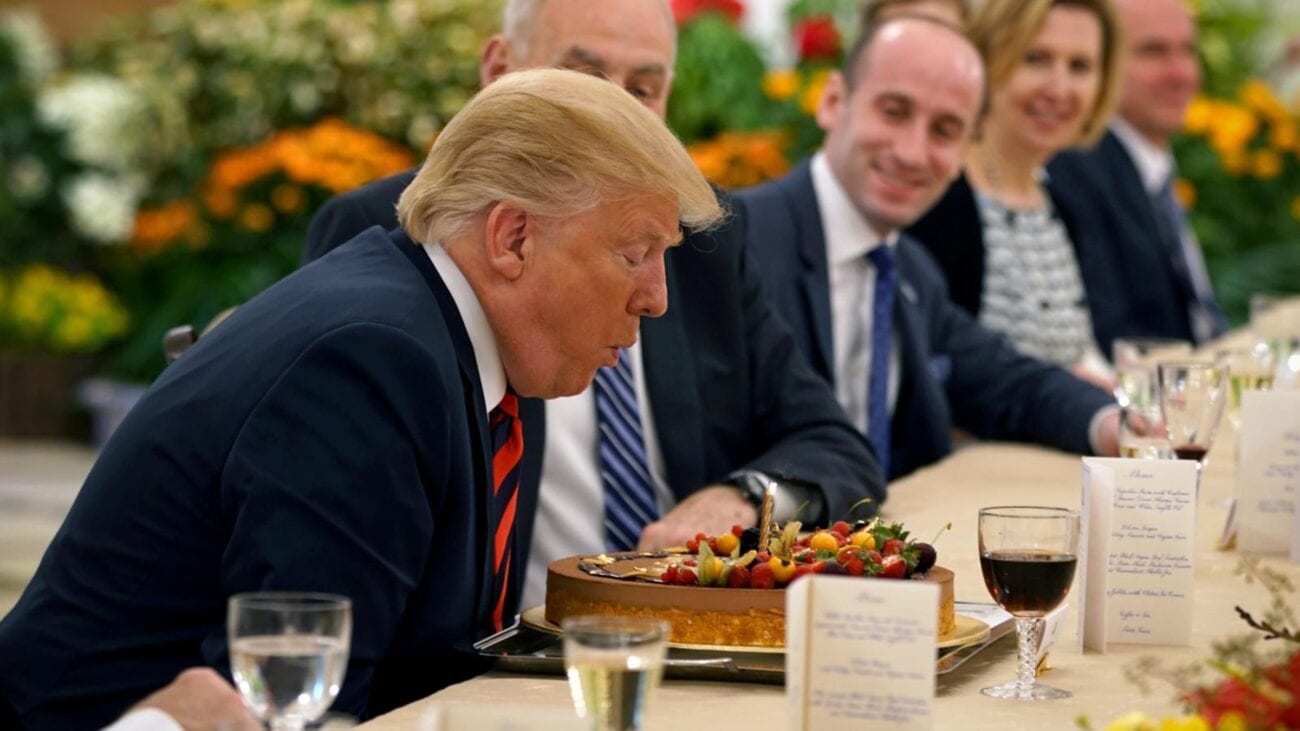 Donald Trump’s birthday: How do his astrological signs influence him?

Current U.S. President Donald Trump will remain in office until at least January. After that, The Associated Press & other media outlets have projected former VP Joe Biden will take office based on reported election results from U.S. states. In response, Trump has sent out a flurry of legal action, claiming the election result was fraudulent, particularly in key swing states like Michigan, Wisconsin, and Pennsylvania.

Almost ZERO ballots rejected in Georgia this election. In years past, close to 4%. Not possible. Must have signature check on envelopes now. Very easy to do. Dems fighting because they got caught. Far more votes than needed for flip. Republicans must get tough! @BrianKempGA

Before & during his presidency, Donald Trump has been a divisive figure. Trump himself has added fuel to the U.S. political (dumpster) fire via Twitter, often making blustering claims in ALLCAPS and calling his political & personal enemies names like “Sleepy Joe (Biden)”, “Crooked Hillary (Clinton)” and “Lyin’ Ted (Cruz)”.

Astrology may offer us some insight into why he acts the way he does. Indeed, Donald Trump has a very notable birth chart that reflects his more distinct characteristics. What are they? Does astrology have anything to say about where Trump has been, and more importantly, where he’s headed? Let’s take a look. 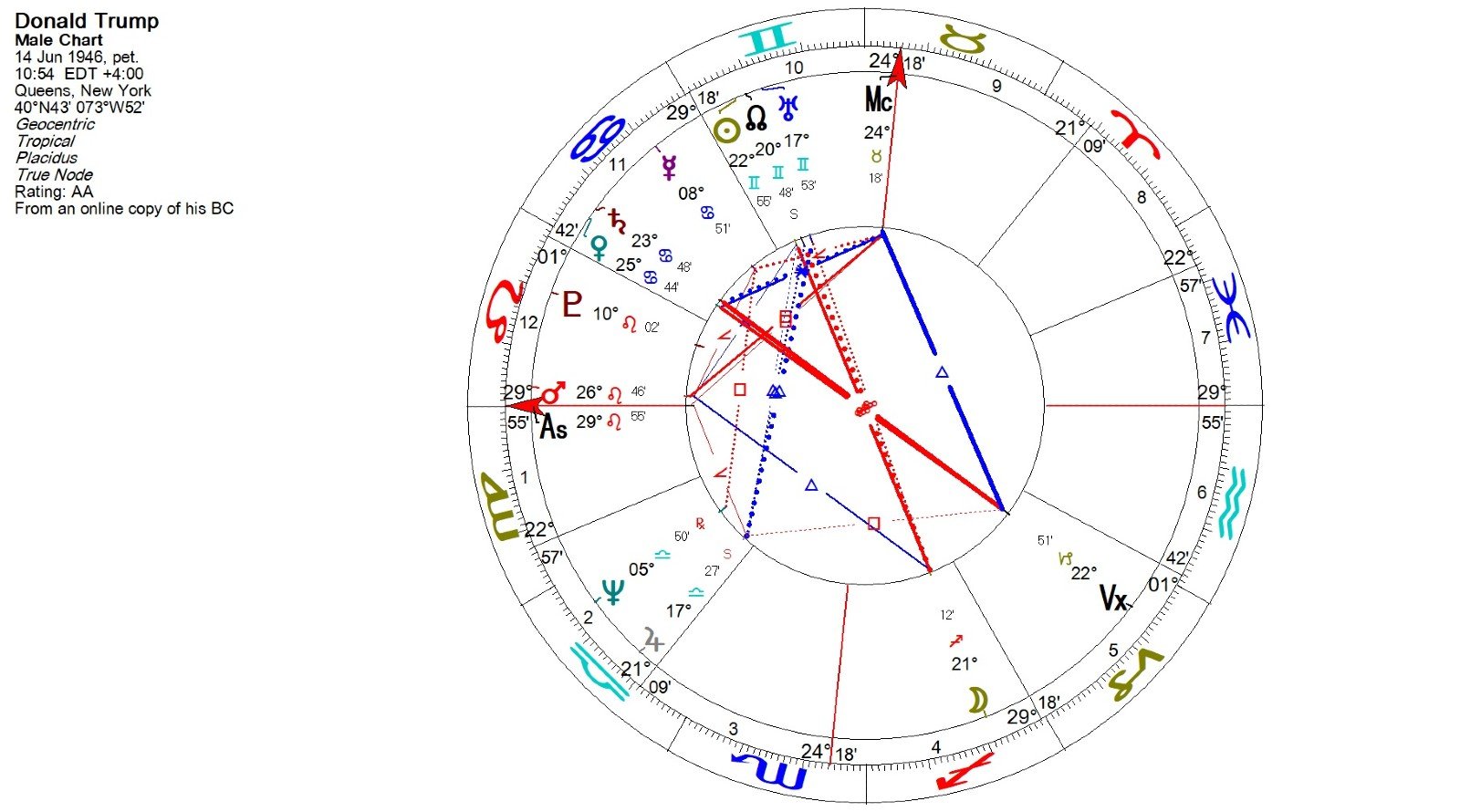 It should come as no surprise when we tell you Donald Trump is a Leo rising (Leo was rising off the eastern horizon at the time of his birth). Leo risings are known for a big appearance, projecting grandiosity, and many of them have distinct hair.

Donald Trump was born on a full moon with his sun at 22 Gemini in his tenth house of career and his moon at 21 Sagittarius in his fourth house of home & family. His Sag moon, an indicator he craves freedom in relationships and being in his fourth house, reflects the up & down nature of his domestic life.

His moon also brings out the creative side of his communication. Per astrologer Betty McKeon, “Sagittarius is known as the salesman, the storyteller, and the exaggerator of the astrological world. Someone with strong Sag energy might tell you there were 100 people at a party they attended when in reality, there were 25.” 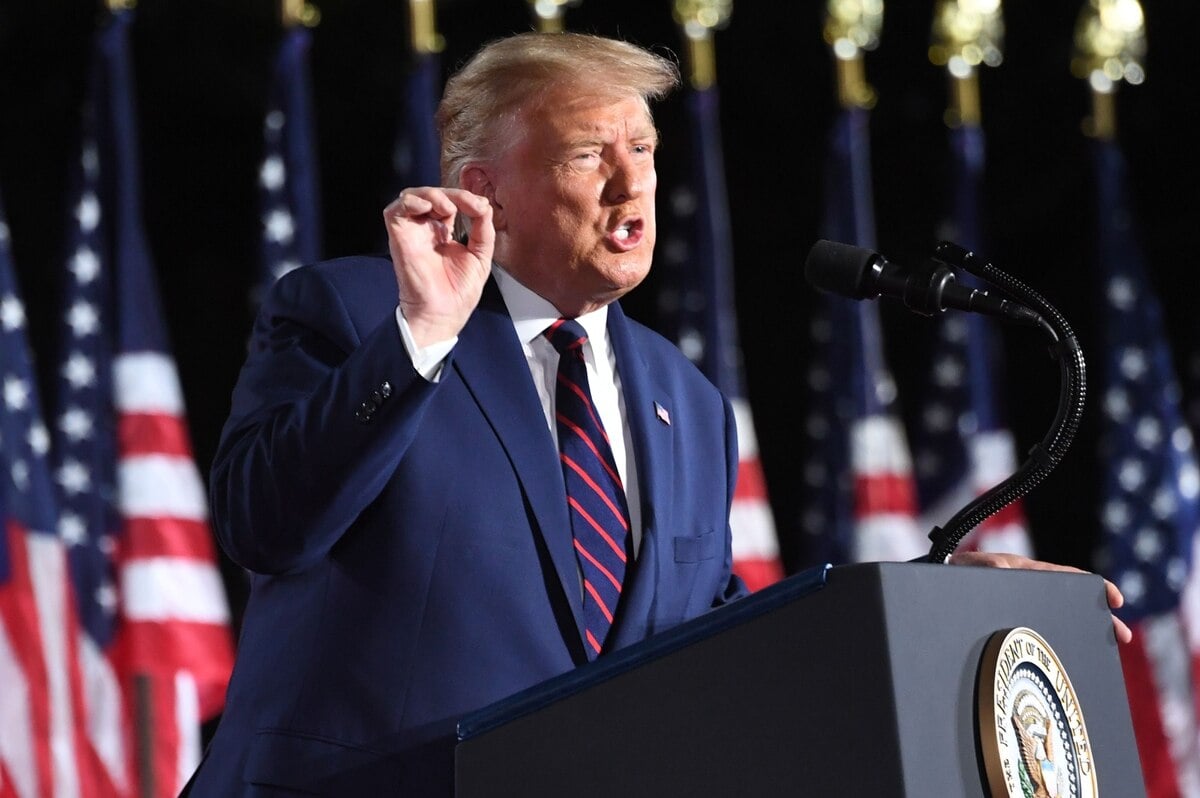 Not only is Donald Trump a Gemini sun, but he also has the North Node & Uranus conjunct his sun, too. His moon, opposite his sun, conjunct his South Node. As explained at a presentation at the PCC/ESR Retreat, Trump was born a few hours before a lunar eclipse, amplifying his sun/moon opposition and the power behind the planets in their orb. 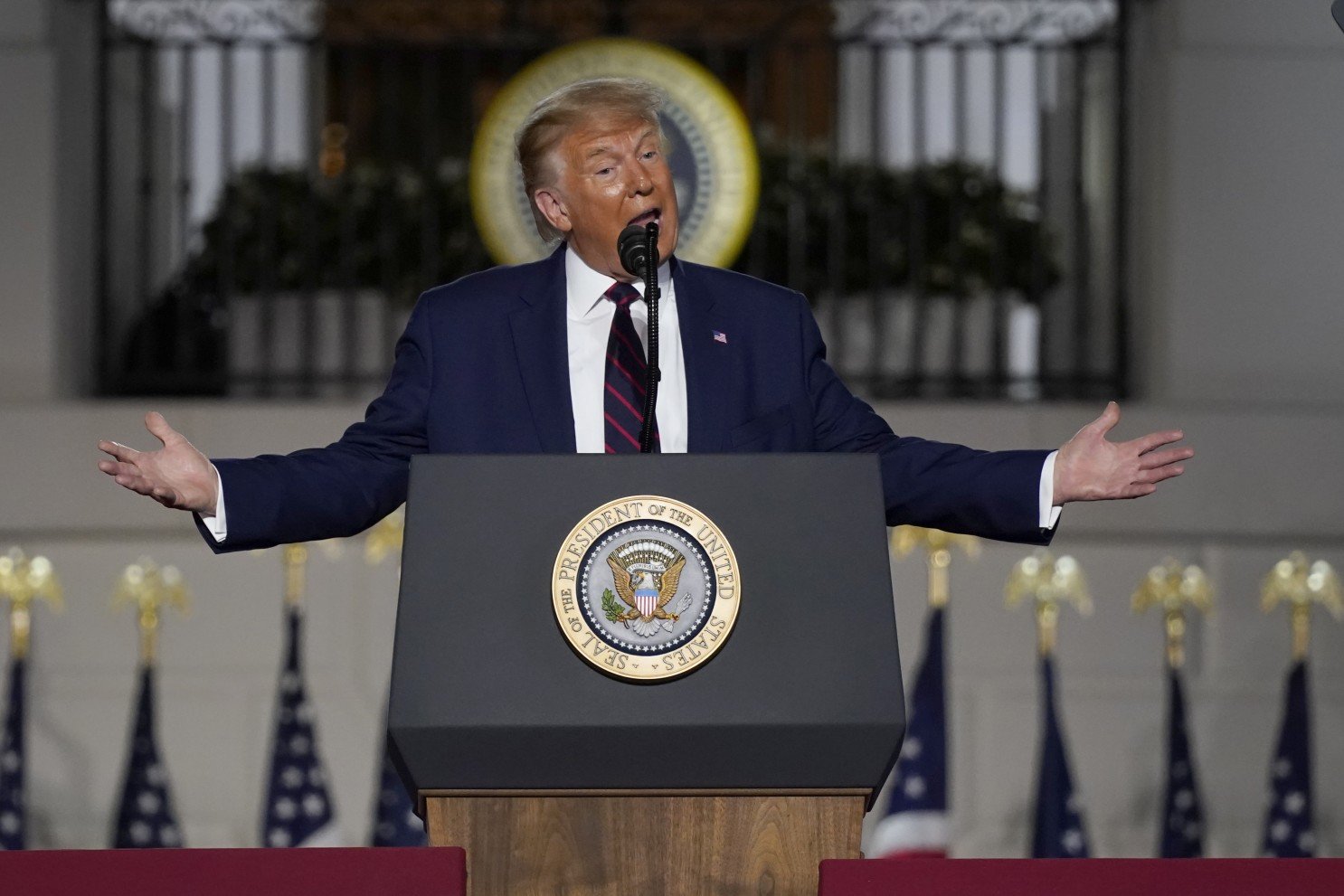 It’s especially apt his preferred way of reaching his audience is a social media platform dedicated to short, quippy statements: Twitter. Twitter is the ultimate expression of Gemini’s penchant for everyday communication. With Trump’s north node there, representing his destiny and where his life is headed, it’s no wonder his career & notoriety have thrived on the platform.

Speaking of career, although Uranus in Gemini is a generational placement, Uranus in the 10th house indicates major, unexpected changes in one’s career. Would anyone have guessed a New York real estate mogul with no political background would become President of the United States?

Since Donald Trump ascended to the highest office in the U.S., we’d be remiss not to look at his chart compared to the U.S.’s natal chart. The Sibly Chart, made by Ebenezer Sibly, is based on the time when the U.S. Declaration of Independence was signed: July 4, 1776 at 5:10 PM. It’s the most commonly used chart to predict future U.S. events and analyze the U.S. by astrologers.

Most notably, Donald Trump’s sun is right next to the U.S.’s Mars at 21 Gemini. In the U.S. seventh house, it indicates Trump has a contentious role in the U.S. and in their relationships with global allies & partners. 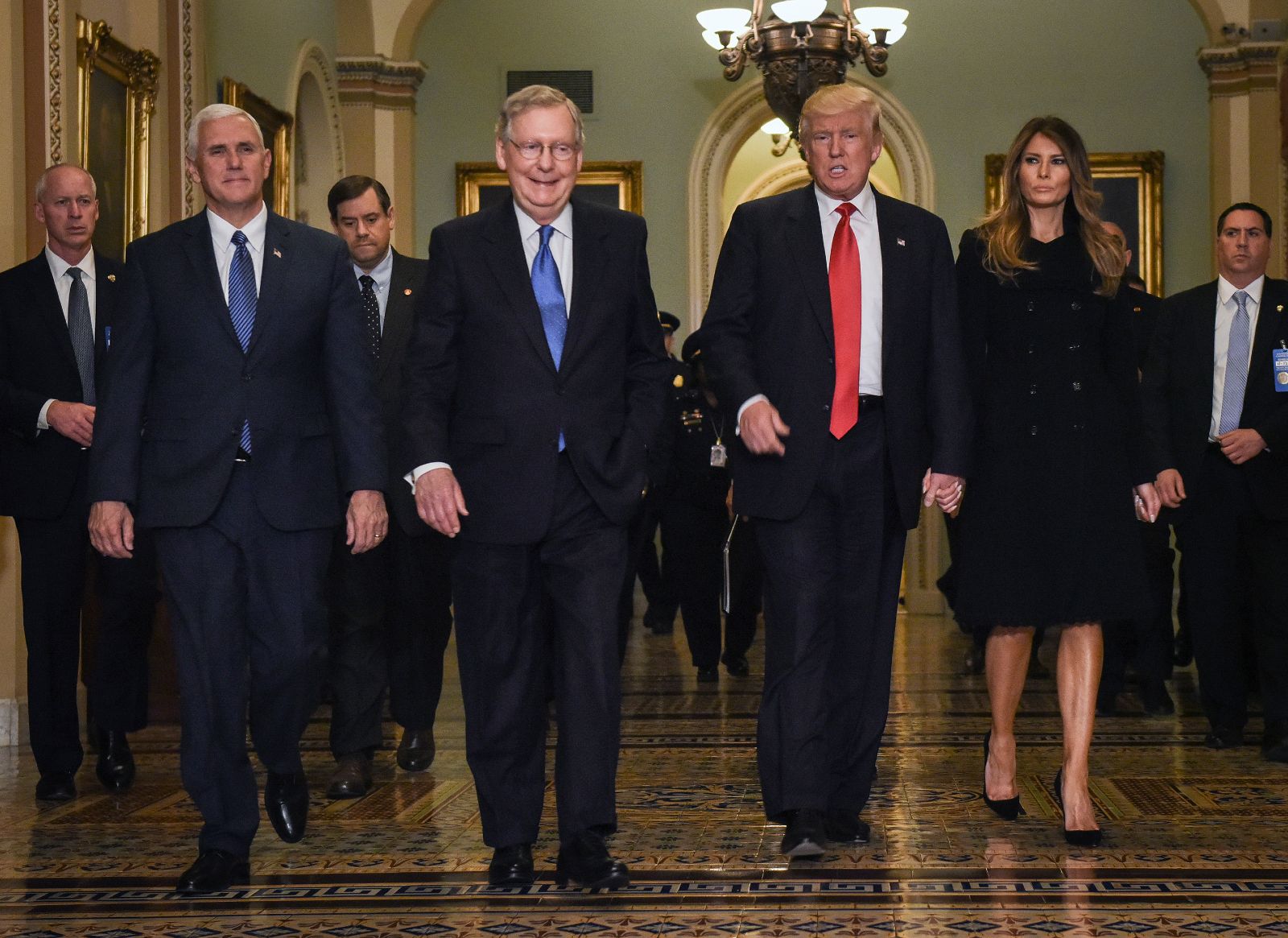 Donald Trump’s sun on the U.S.’s Mars is also a power placement, as astrologer Bill Herbst points out: “Since Donald Trump took office as President in 2017, backed by Republican majorities in both chambers of Congress, we’ve witnessed shocking displays of raw political power.” As the conjunction happens in Trump’s 10th House of career, and the U.S.’s 7th House of partnerships, alliances are key to Trump as president.

It’s important to note, the U.S. is facing its Pluto return over the coming years. Per astrologer Ronnie Pontiac, The U.S. Pluto return is all about restructuring & total transformation. “America has a lot of soul searching to do. As a collective, the human race now confronts the consequences of ignored responsibilities. Things are changing fast, but whether for the better or the worse remains to be seen.” 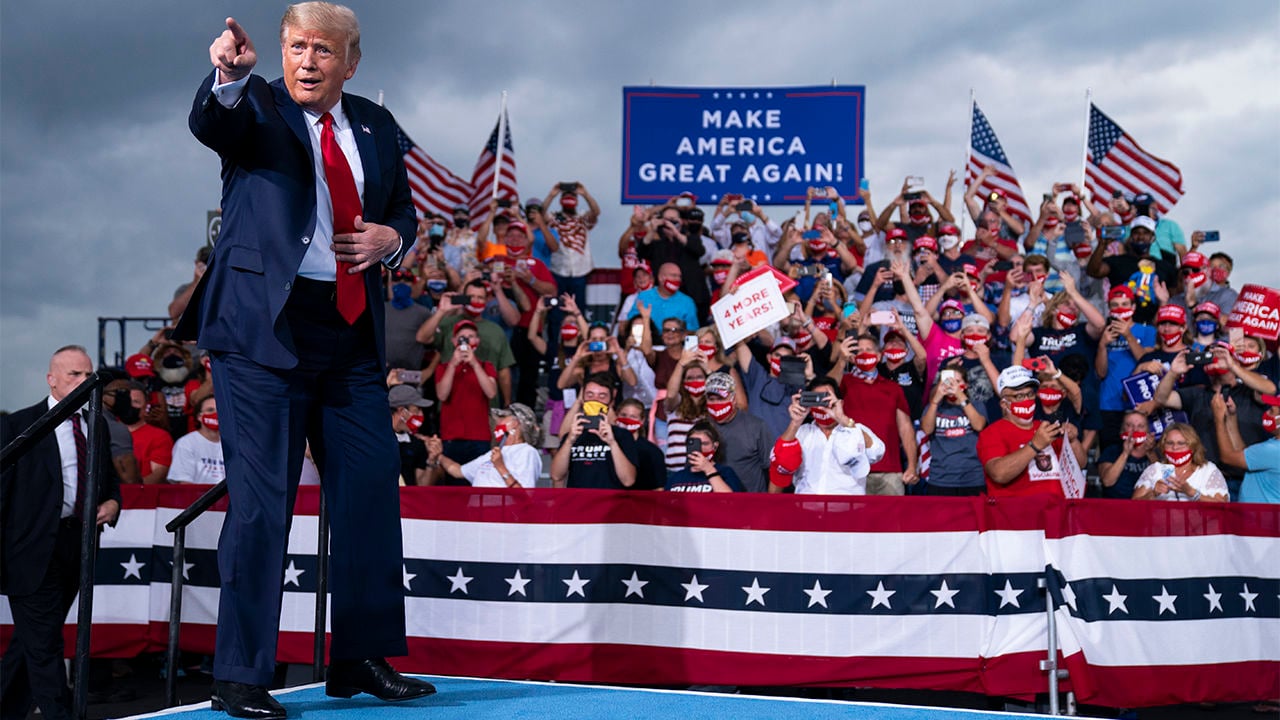 In 2016, many mainstream news outlets called Donald Trump’s win “unprecedented”. However, Bill Herbst claims Trump’s win was “surprising to some, but probably shouldn’t have been, since mistrust in government and anger at the existing status quo have become noteworthy among a sizable percentage of the public.” Herbst cites deep cultural divisions in the U.S., projected by Uranus & Pluto in the U.S.’s chart in 2016. 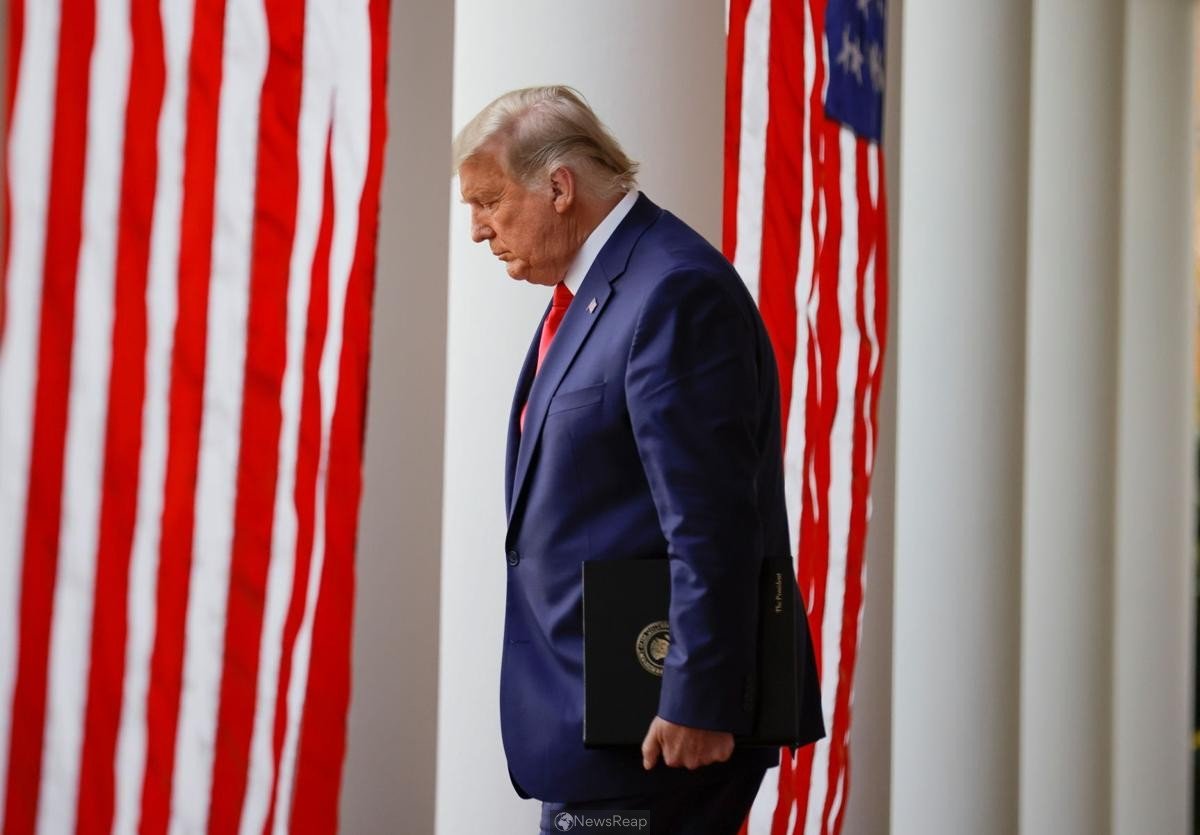 2020 was a tumultuous year for everyone, including Donald Trump. His third Saturn opposition happened in his 6th house of health at the end of Capricorn, facing off his natal Saturn at the end of Cancer in the 12th house. As such, many astrologers predicted his health would take a bad turn. Indeed, Trump caught COVID-19 in October but made a quick recovery. On a macro scale, he had to oversee a global pandemic while in office.

Astrologer Steve Judd predicted in January that the U.S. election was “Donald Trump’s to lose, not the Democrats’ (or Republicans’) to win. . . If he loses, it will be by his own hand, almost”. Judd also pointed out the U.S. “wasn’t united enough to defeat him”.

From the election, this looks to be the case. Voter turnout was the highest ever, both from the GOP & Democratic voters. The Washington Post reported it was one of the highest ever, and NPR projected record-shattering turnout based on submitted mail-in ballots back in October.

“Whether he wins or loses, he looks to be in a shaky position,” Judd predicted in a video on Election Day. Trump had some challenging opposition this year & next year he has more – involving Saturn & Pluto. This could impact his heath as stated before, but it could also affect his finances and potentially lead to some legal difficulties.