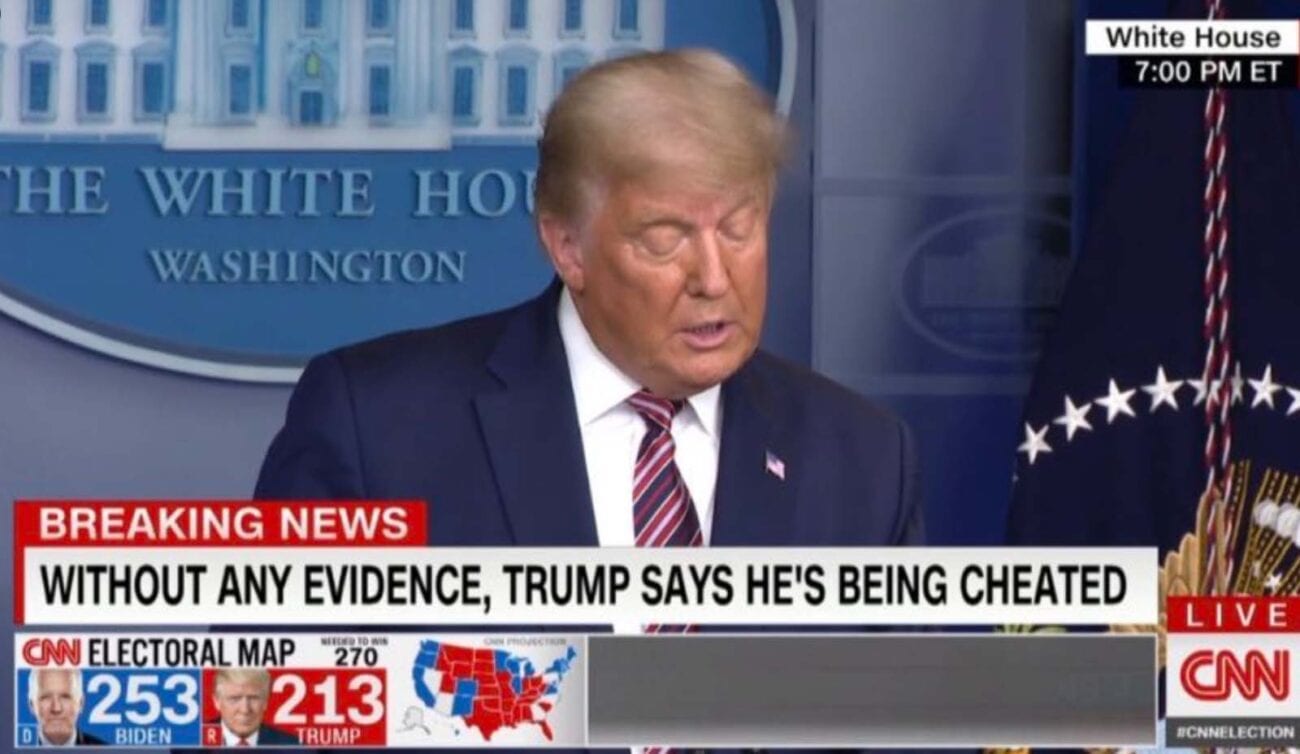 As the days drag on while U.S. citizens wait for the final results of the presidential election, everyone’s stress levels are going through the roof. While we all recognize how important this election is – in the end we just want it to be over. 2020 has been filled with big historical events and we’d all very much like to experience mundanity again as soon as possible.

Donald Trump on the other hand, has on multiple occasions, attempted to declare victory during this week, despite the fact that not only are votes not done being counted, but also he’s losing according to the current state of the numbers.

Logic has never stopped Donald Trump, however. He declared he won on Twitter, during a speech on November 3, and again during a press conference on November 5. People are understandably annoyed, bewildered, and downright exhausted. Luckily everyone and their mother has a meme for the occasion. At this point, memes are our therapy.

We have claimed, for Electoral Vote purposes, the Commonwealth of Pennsylvania (which won’t allow legal observers) the State of Georgia, and the State of North Carolina, each one of which has a BIG Trump lead. Additionally, we hereby claim the State of Michigan if, in fact,…..

Trump declared on November 4, via a tweet that he “claimed” Pennsylvania and other states, much like a child may claim shotgun for a road trip or the large slice of pizza before their sibling grabs it – ultimately your claim is meaningless unless mom approves it. (Mom would be the U.S. voters in this case.) This tweet became a popular meme that evening.

I have claimed, for Dinner Tonight purposes, the Big Mac of McDonald's (which won’t allow me to steal chicken nuggies from the back) the Side of Fries, and a Milkshake, each one of which has a BIG size available.. Additionally, I hereby claim dessert.

This user let everyone know they had claimed a Big Mac for dinner as well as dessert in a fun little parody tweet.

I’m claiming California, Oregon and Washington states for Canada 🇨🇦 because I feel like it!

(You get healthcare and a sane leader)

Even Canadians are tired

Even Canadians are jumping in on the meme game when it comes to Donald Trump’s antics.

The press conference on November 5 left people, who are already at their wits end, thanks to the dumpster fire of a year that 2020 is, with a simple choice: memes or the bottle. A lot picked both, but we chose the meme – here are some of our favorites.

CNN headlines are the funniest thing i have ever seen #TrumpMeltdown pic.twitter.com/0QieOcfPas

Yes, these chyrons are real and CNN legitimately had to post these while Trump spoke & attempted to claim he was winning, when he is, in fact, clearly not at the moment of writing this.

Not real, but still funny

This chyron text is a meme, and it’s a rather funny meme at that.

#TrumpMeltdown Trump trying to explain how he has won this election, despite actually losing: pic.twitter.com/MvyFXepbEp

While Trump may not have been quite as manic as this meme, he certainly has the desperation of it.

If mail-in ballots are so fraudulent then why did Ivanka vote by mail? #TrumpMeltdown pic.twitter.com/kHQrTEWdWB

Trump is doing his darndest to make mail-in ballots sound like a sham, but we’re pretty sure he’d want those two votes counted. The only exercise Trump does is mental gymnastics.

List of Evidence Donald Trump came to the press conference with #TrumpMeltdown pic.twitter.com/oV7HQmyqpA

Trump did have one piece of evidence, but that evidence was “I don’t like this”, and we know that won’t hold up in court. (Oh for the love of all that is good in this world, don’t make this go to court.)

Question shouted as President Trump departs news conference without taking questions: "Are you being a sore loser?" pic.twitter.com/Vl9vxSEFlC

Are you being a sore loser?

One reporter at the press conference can be heard asking Trump as he leaves, “Are you being a sore loser?” It can be hard to catch on the first watch, but he says it as everyone else quiets down. Twitter had a hey-day with this clip.

This picture says it all.

Pulitzer prize for photography, anyone?

There have been a lot of journalistic photos working to encapsulate 2020, and many have created powerful images in the process, though we find ourselves rather partial to this screencap of the press conference.