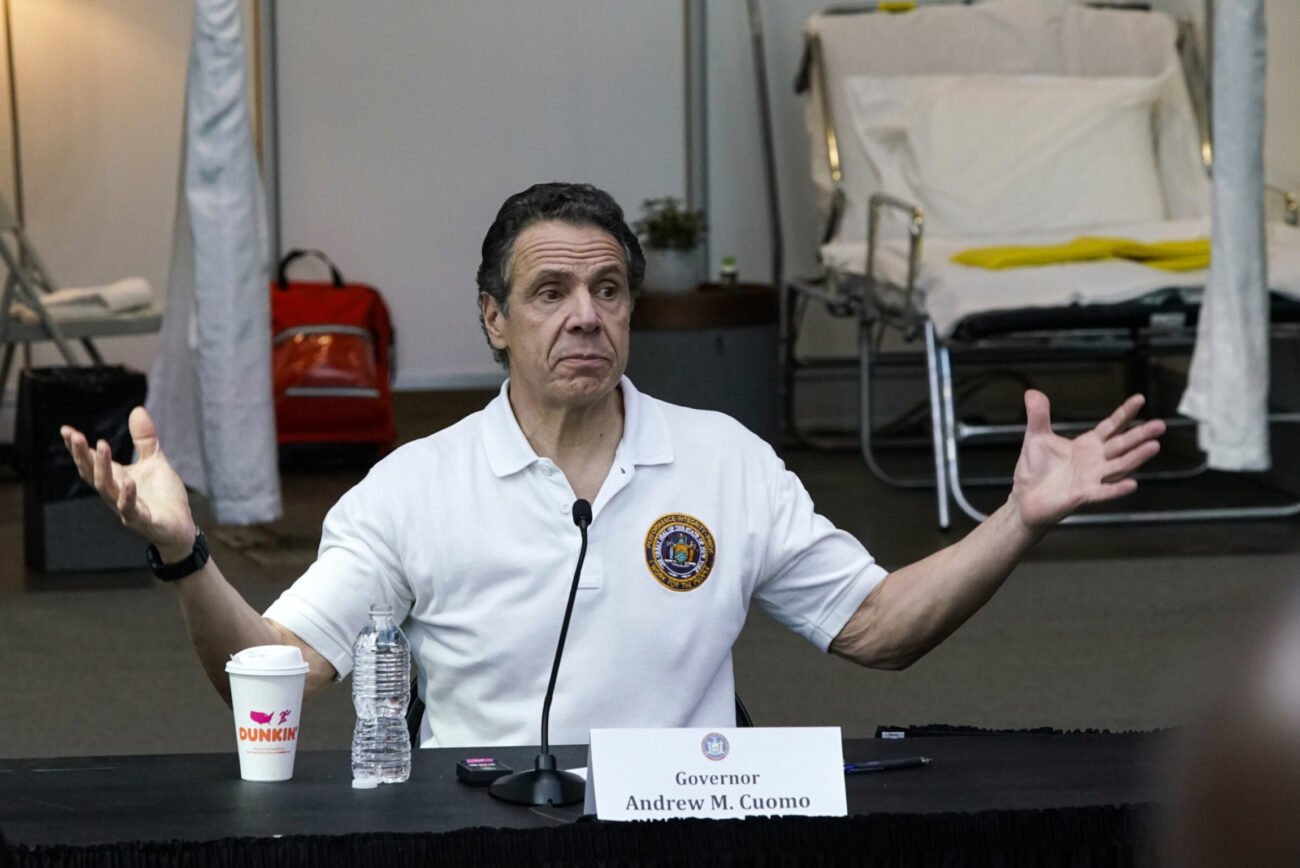 Has Andrew Cuomo’s approval rating dropped since his harassment allegations?

While Cuomo may be in the doghouse with New York representatives, how is his approval with typical New Yorkers? Let’s take a look. 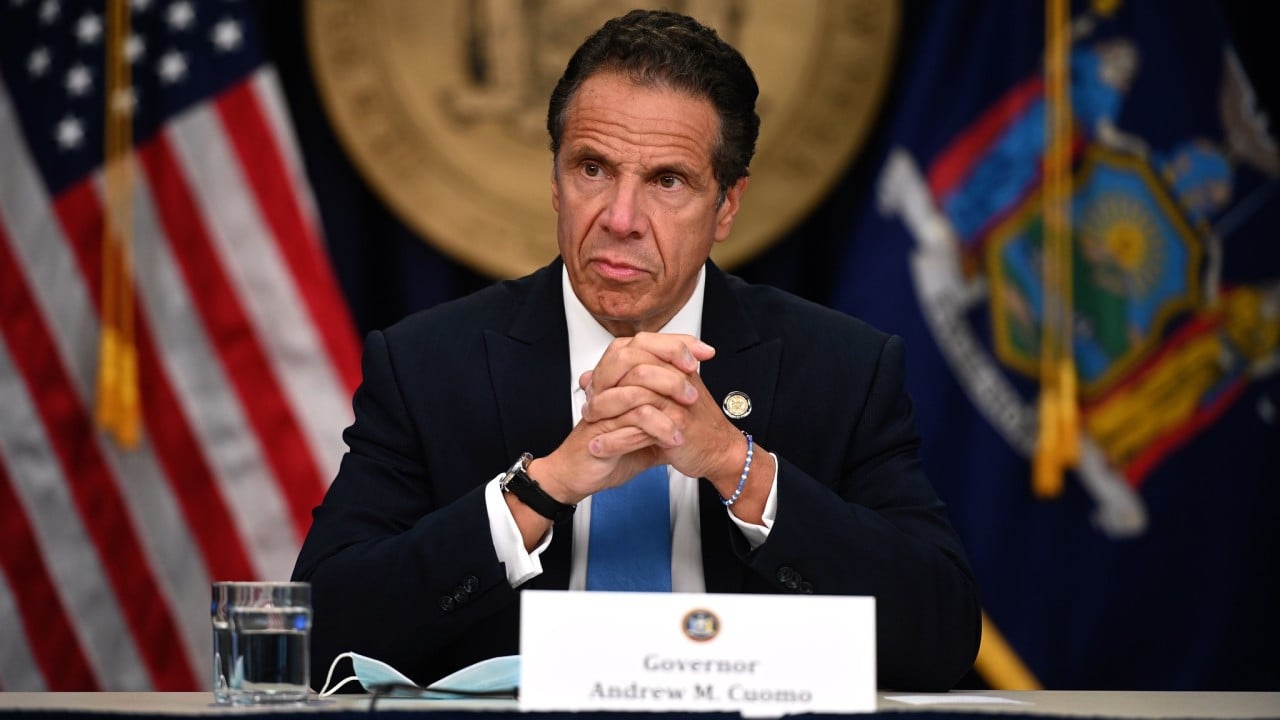 In New York State, Andrew Cuomo’s approval hit an all-time low of thirty-eight percent. His low approval rating wasn’t just because of the sexual harassment allegations, but also because of reports claiming he lowered COVID reporting from nursing homes.

However, in what WIVB reported as “a tale of two states”, the Big Apple appears to be more forgiving of Cuomo than Upstate, especially after his public apology last week. Andrew Cuomo’s approval rating sits at fifty-five percent in New York City, which is “twice as high as NYC Mayor Bill de Blasio” per WIVB. 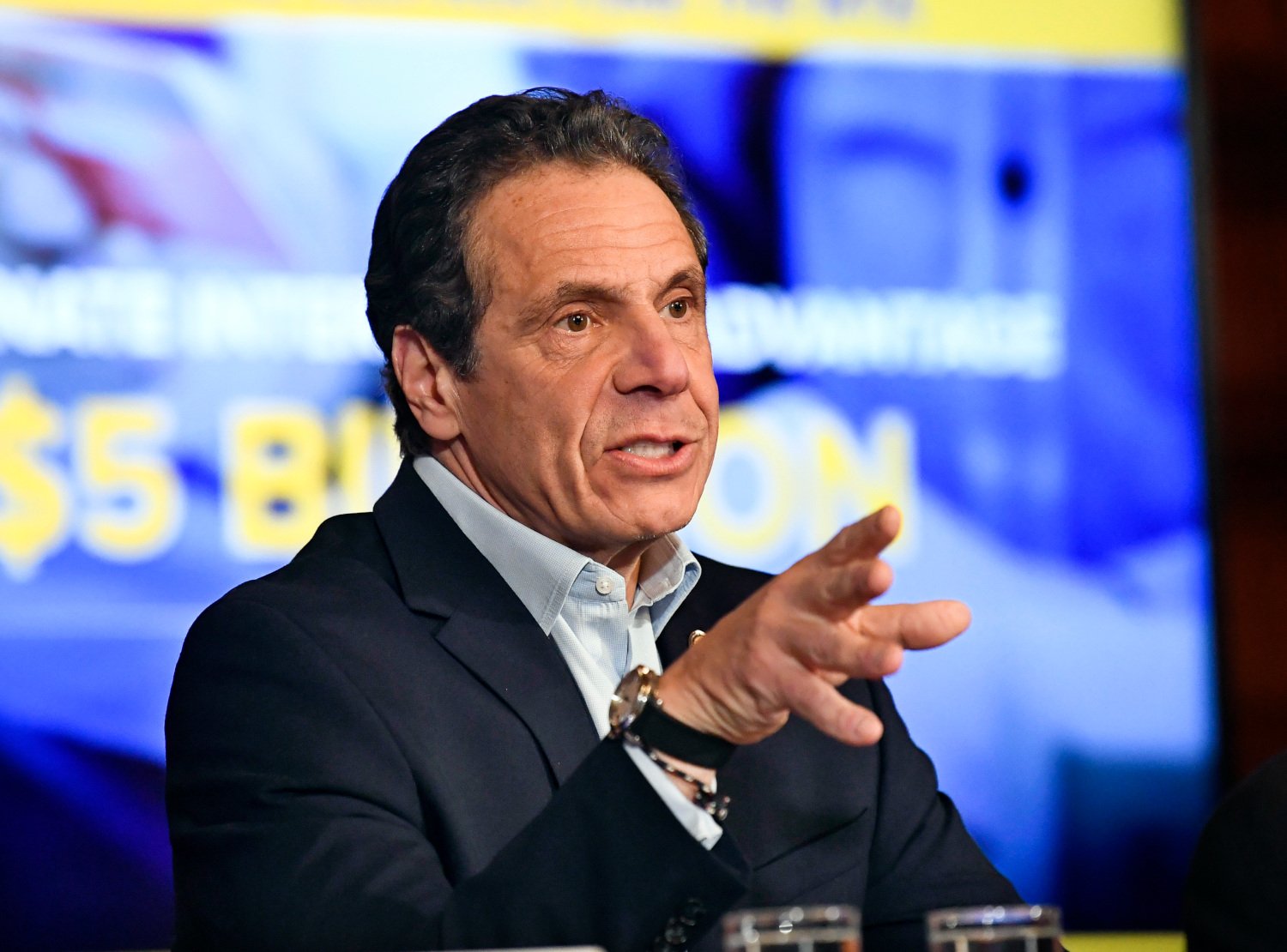 Before & after Cuomo’s statement

Whether you’re a New Yorker who asserts they believe the apology also has to do with where you live. City-dwellers declared they believed Andrew Cuomo’s apology forty-eight to thirty-three percent, whereas Long Island & Upstate residents, two to one, you’re likely to say you don’t believe it.

“So, it looks like our region differences shined, and that’s where you’re going to see a big difference between the states. It’s almost a tale of two states, where you have Long Island and upstate, and in between with New York City is a different set of attitudes about Gov. Cuomo”, Empire State Weekly concluded. 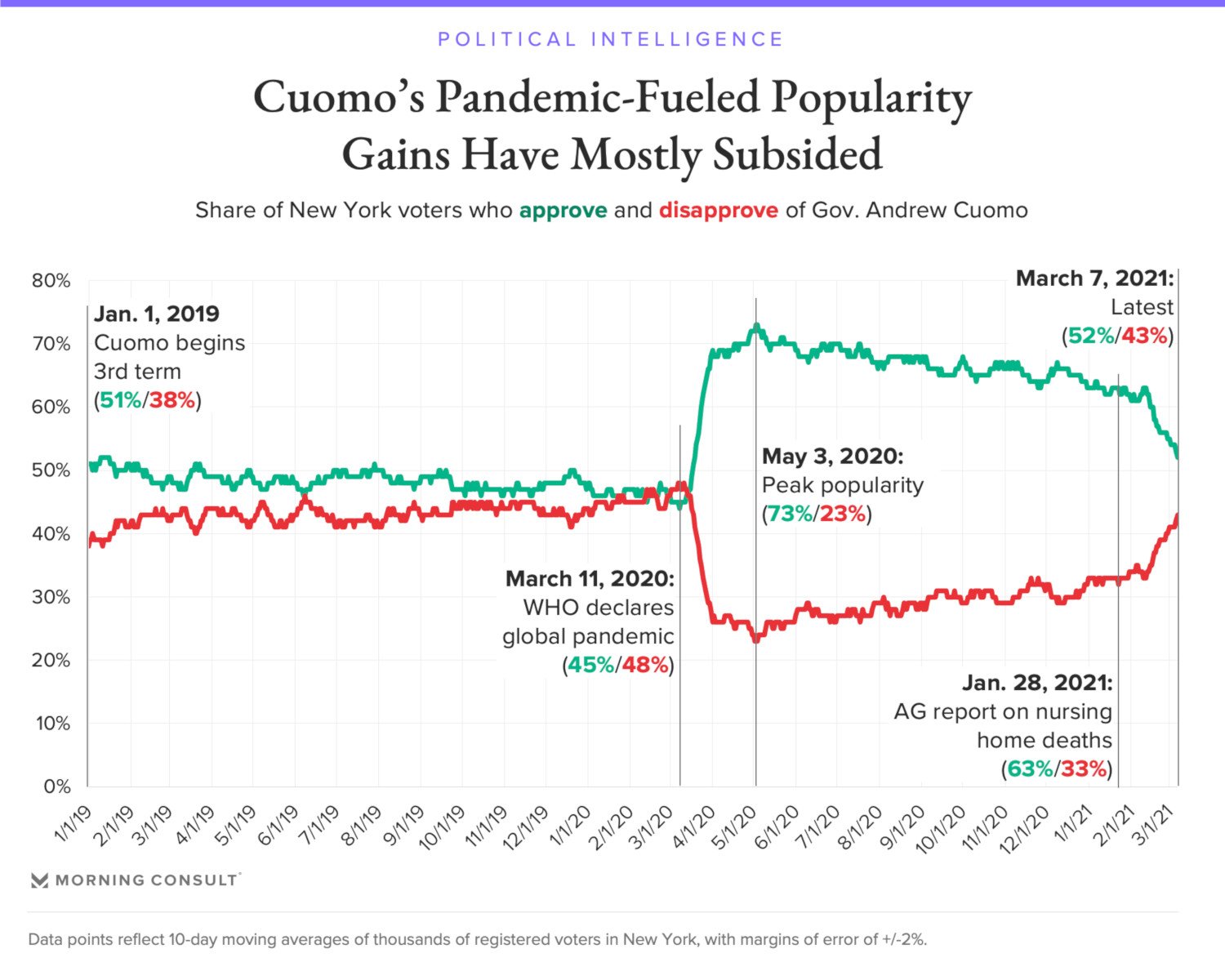 They also noticed a drop from a sixty-three percent approval rating to a fifty-seven percent the week after it was reported Cuomo withheld nursing home deaths from the overall COVID-19 death toll. Further, while 81% of New York Democrats still approve of Cuomo, his “strongly approve” rating has fallen nine percentage points to thirty-three percent. 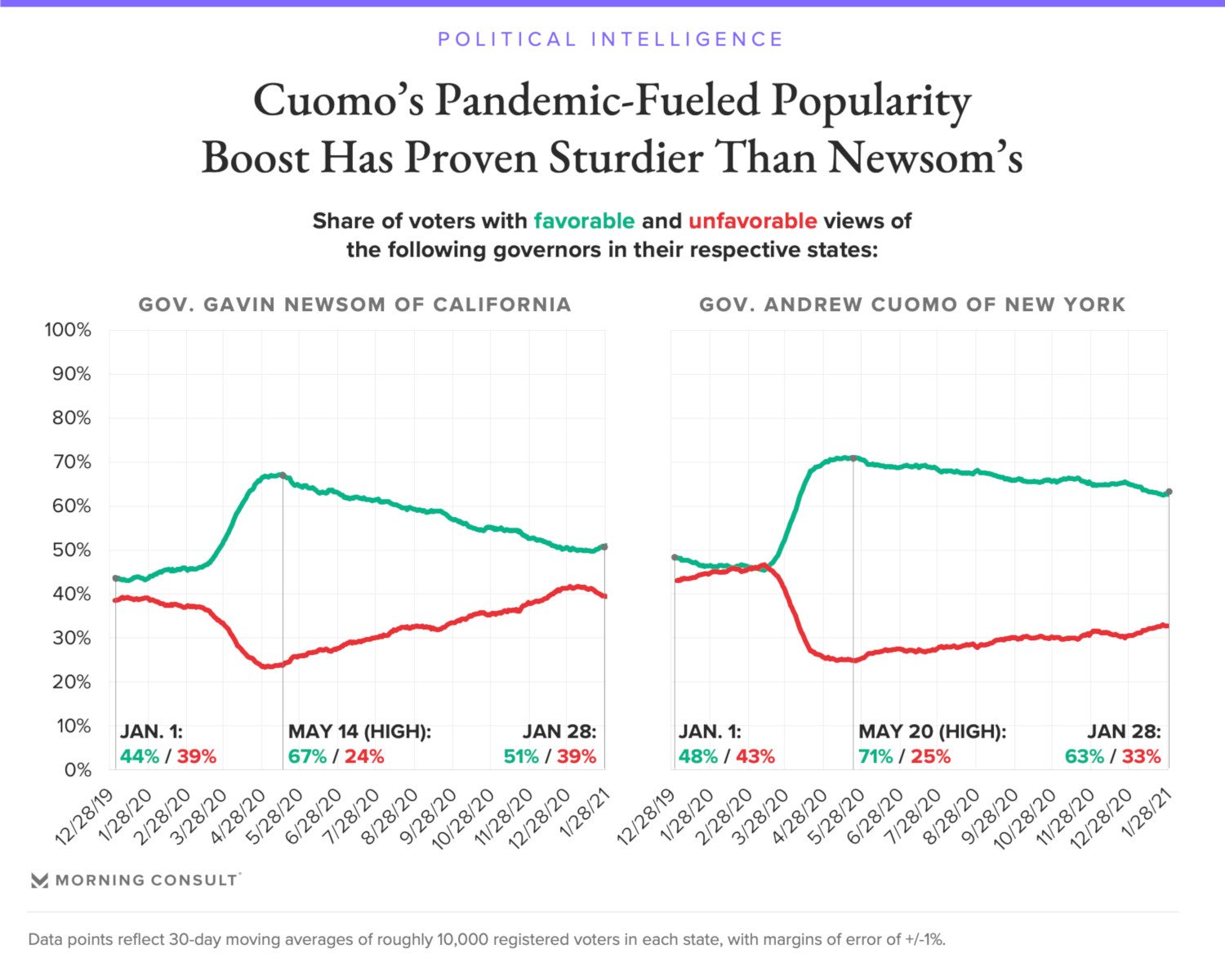 Andrew Cuomo’s approval rating may have fallen, but per Morning Consult, it’s still stronger than before the pandemic where it hovered at fifty-fifty through February & March. After lockdown, Andrew Cuomo enjoyed a surge in bipartisan approval which stayed in the sixties until the sexual harassment & nursing home allegations hit.

Morning Consult contrasted Andrew Cuomo’s steady high approval ratings through the pandemic with California governor Gavin Newsom. Bipartisan support for Newsom surged, but declined after a surge in COVID-19 cases, reported economic instability fueled by strict lockdowns, and a “mask for thee but not for me” incident where Newsom was photographed sans mask at a French restaurant. 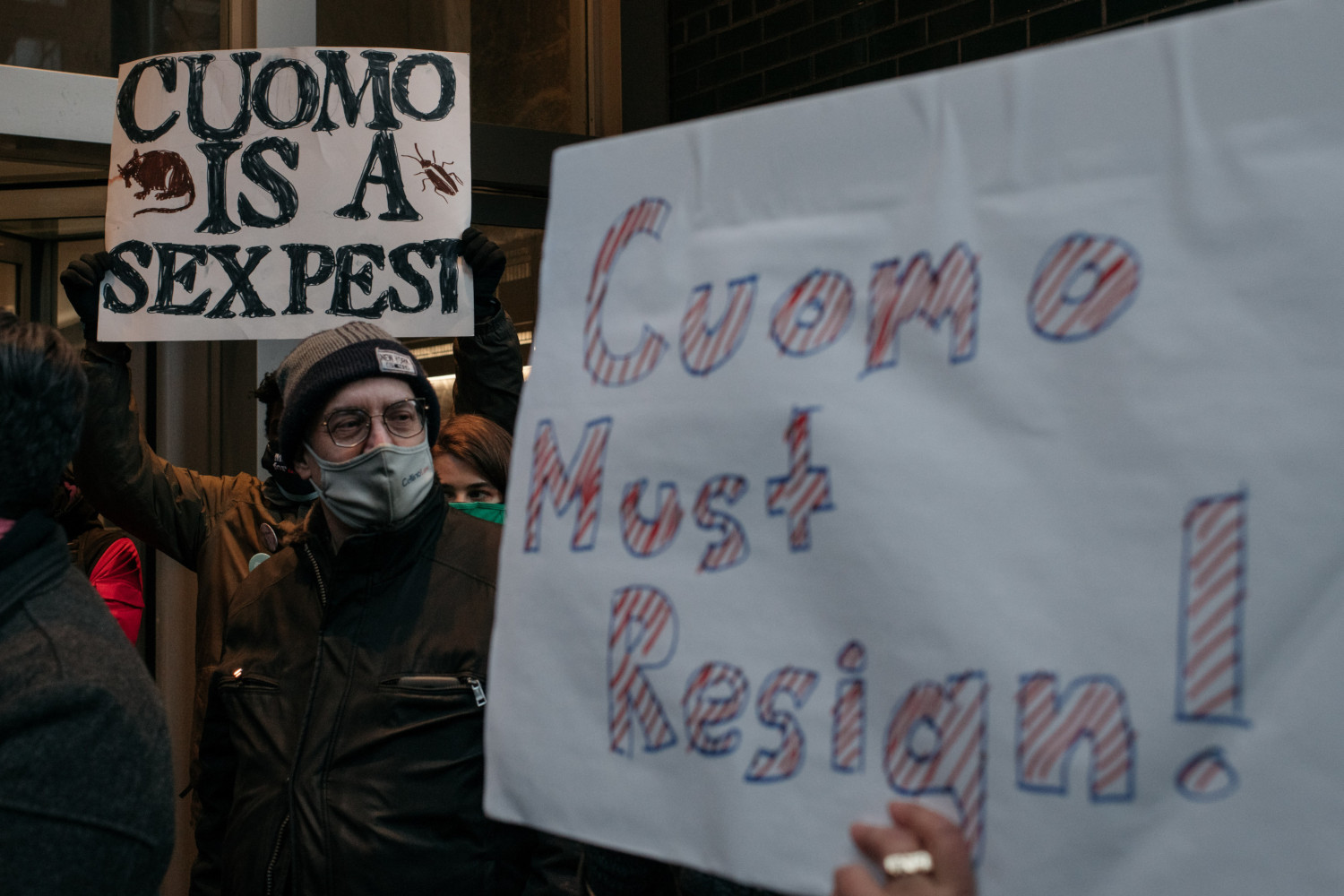 What caused the plunge?

Earlier in February, a report claimed Andrew Cuomo’s administration withheld numbers from nursing home’s COVID-19 death toll throughout the pandemic. Then, at the end of the month, two former aides came forward and accused Andrew Cuomo of sexual harassment and “predatory behavior”.

Per Morning Consult, according to one of Andrew Cuomo’s aides, the nursing home numbers were obfuscated out of a stated fear that Trump Administration prosecutors would use the numbers against Cuomo due to the reported animosity between the two. And while Cuomo opened an independent investigation into the allegations, his accusers stated it was too little, too late.

“It took the Governor twenty-four hours and significant backlash to allow for a truly independent investigation”, former aide Charlotte Bennet who sounded the alarm on Cuomo’s alleged behavior to The New York Times said. “These are not the actions of someone who simply feels misunderstood; they are the actions of an individual who wields his power to avoid justice.” 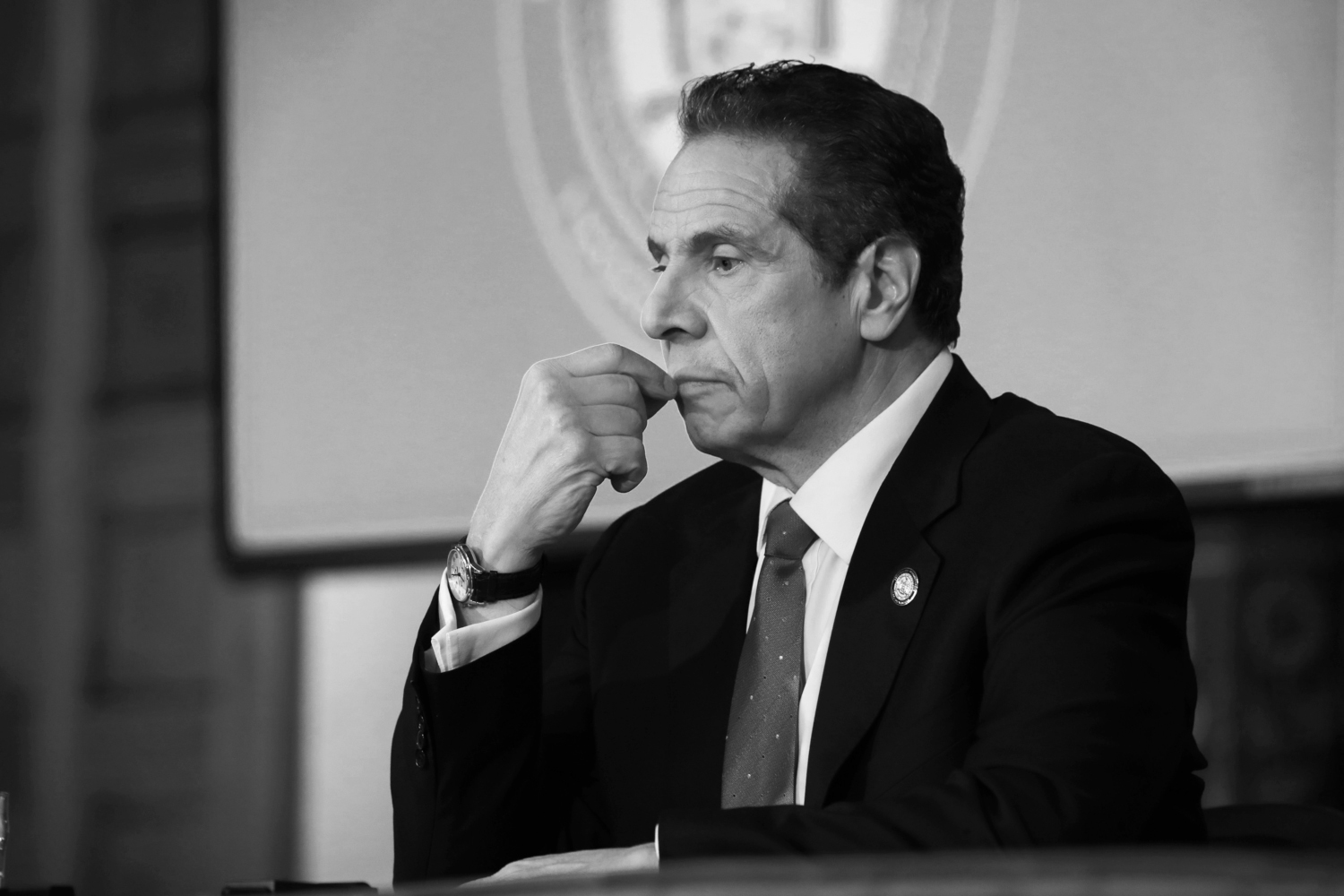 The New York Post has reported President Joe Biden weighed in on the sexual harassment allegations, stating he thinks “we should see what it (the investigations) brings us” before calling on Cuomo to resign.

House Speaker Nancy Pelosi echoed a similar statement on ABC’s This Week, saying: “And what I’m saying is the governor should look inside his heart — he loves New York — to see if he can govern effectively. I think we should see the results of the investigation.”

Meanwhile, New York Attorney General Letitia James has opened an inquiry and the New York State Assembly is reportedly holding an impeachment inquiry. During his public statement on the allegations, Cuomo declared he won’t give in to “cancel culture” and resign, stating his actions were “unintentional” per ABC News.