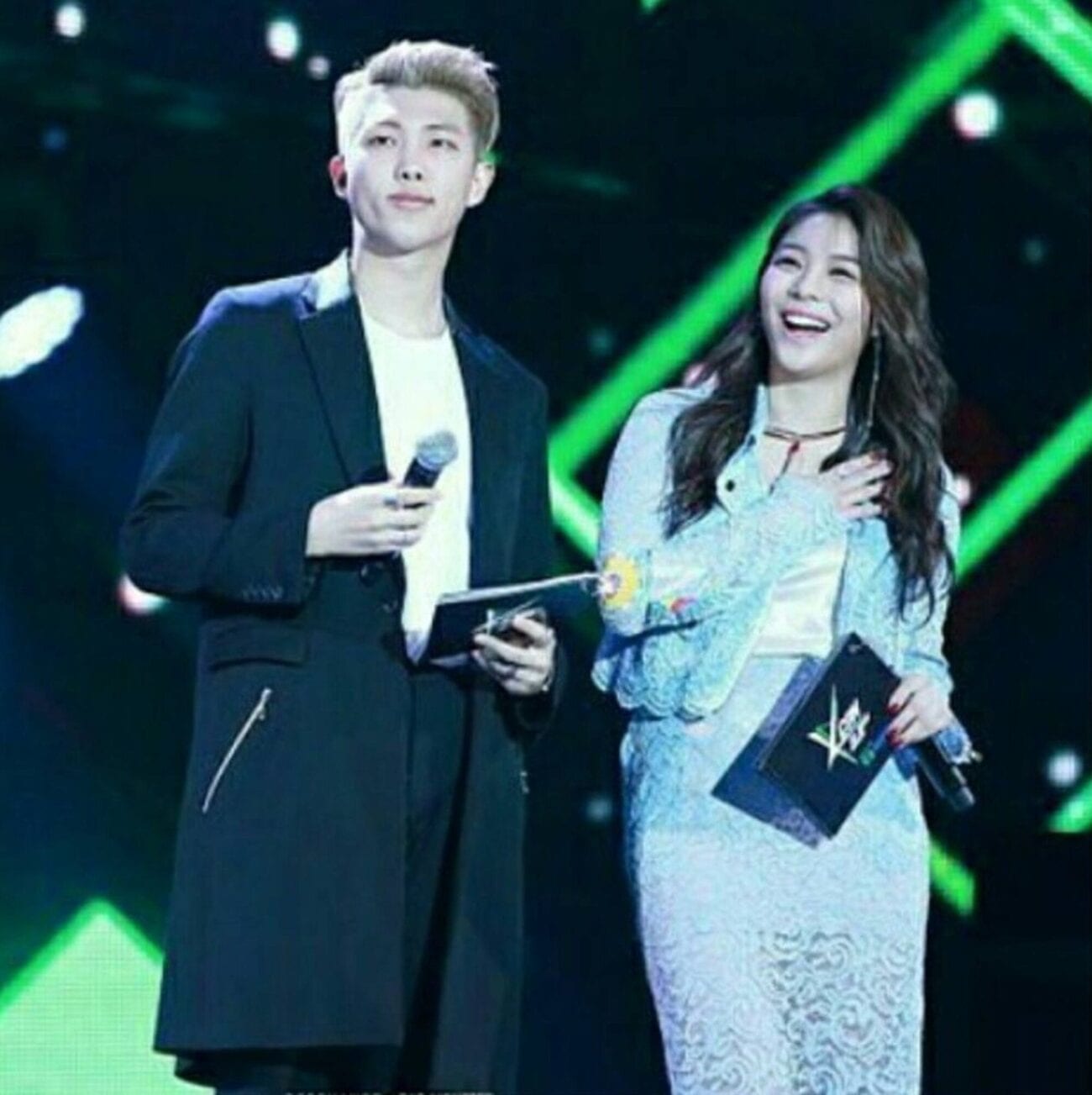 Which K-pop stars have been romantically linked to BTS’s RM?

RM: K-Pop rap icon and leader of BTS. Rap Monster can spit some sick rhymes and sometimes give off a hard persona, but some wonder whether RM sometimes pines after a love life. According to Big Hit Entertainment, RM is officially single and he hasn’t indicated anything contrary to that himself.

Of course, that doesn’t mean isn’t crushing on anyone. After hearing about a sad pre-debut relationship RM had in high school, many ARMYs wish him well in his future love life. RM had to learn some major lessons about love & insecurity in this relationship and has since grown into a confident & emotionally intelligent person.

Has RM put the lessons he’s learned in love into practice since then? RM has confessed that he crushes on Hollywood’s Blake Lively big time, but what about people in the K-Pop sphere. He’s been suspected as having potential romantic connections with several K-Pop stars, but you won’t know if any of them have any validity unless you read on. 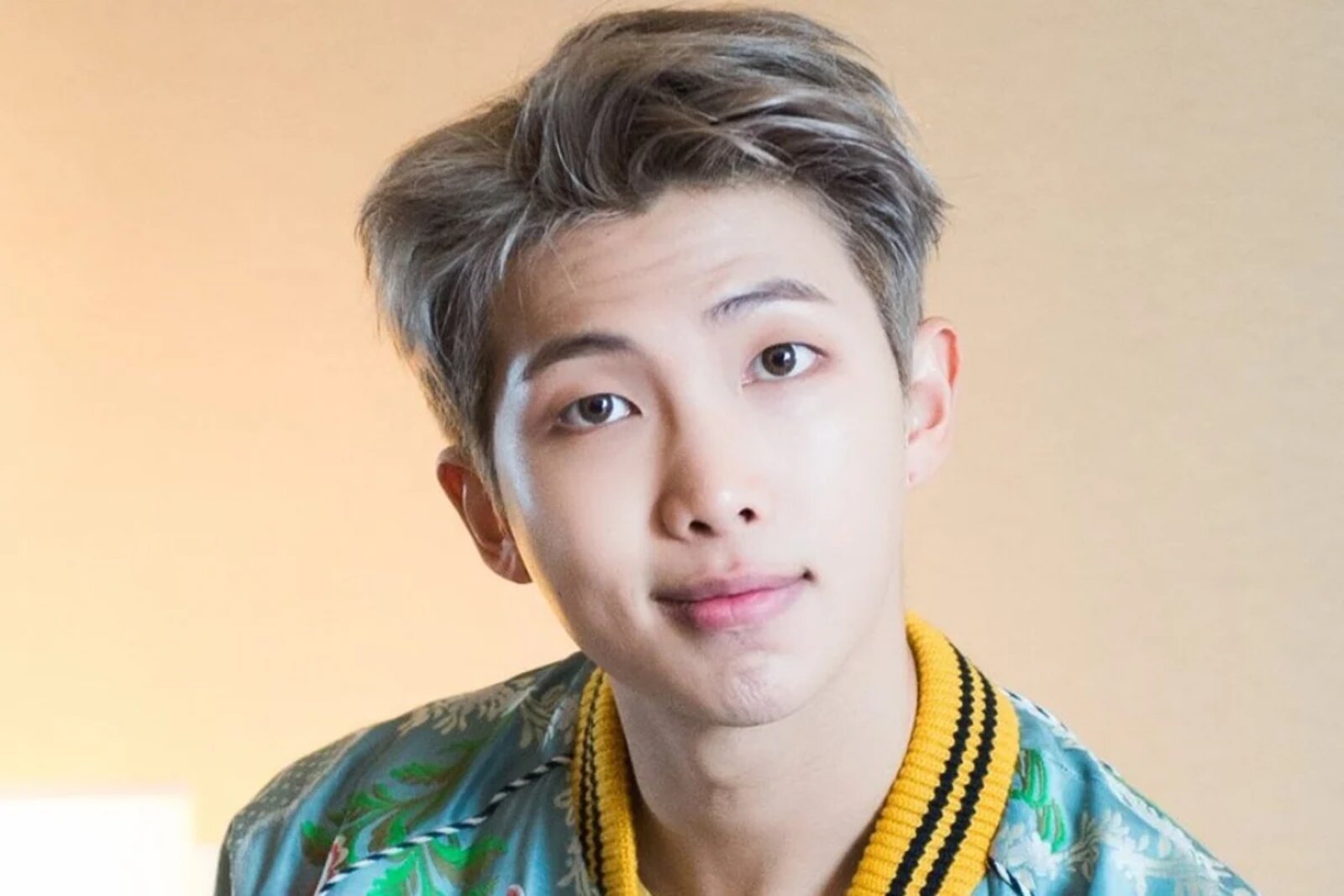 Ay yay yay, Ailee. Are you an RM heartbreaker?

Ailee is a Korean solo artist who made her debut in 2012. Although originally signed with an American label, Ailee later moved to South Korea and became an artist for YMC Entertainment. She and RM have MC’ed together at quite a few events so they’ve spent a bunch of time together professionally.

Some speculate as to whether the professional relationship turned into something more because of some cute interactions Ailee and RM have had together. They’ve been seen laughing together and leaning in close to talk during loud events, but nothing too substantial regarding a romantic relationship has been uncovered. 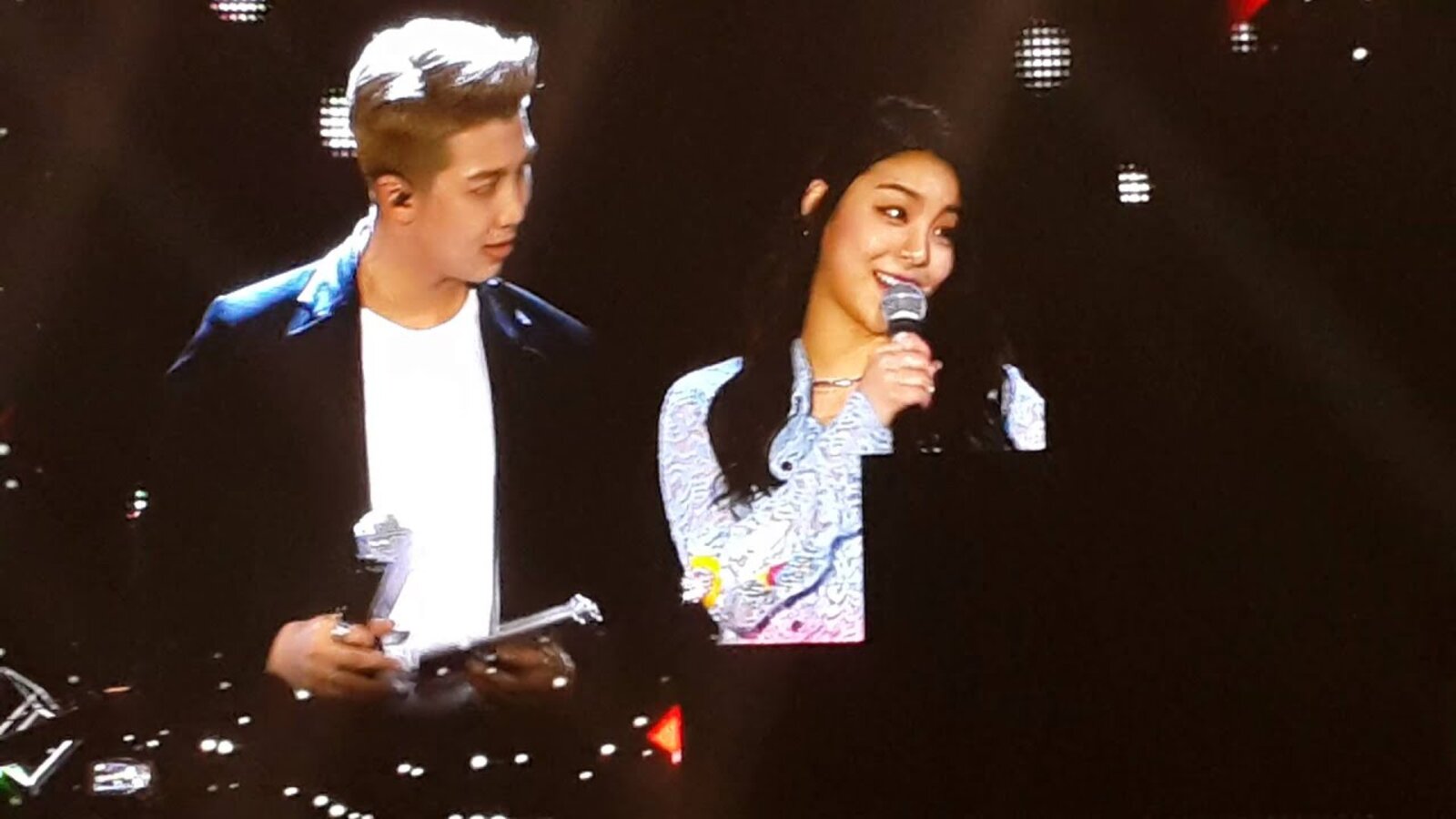 The most substantial of the bunch might be a moment when Ailee strolled down a walkway past BTS. RM was caught staring fondly at her long after she had passed. This looked pretty suspicious because the other members were already chatting and looking at other things, but RM seemed to be gazing after Ailee. He could have just been having a spaced-out moment, but maybe he really did have feelings for her at some point.

The thing is, Ailee was once recorded raving about BTS and how she loves one of the BTS members’ voices. When asked who she was talking about she said it was Jiminie. “There’s just like something in his voice, the way he sings, that just seduces you.” So if RM really was crushing on Ailee that must have been crushing to hear. Yikes! 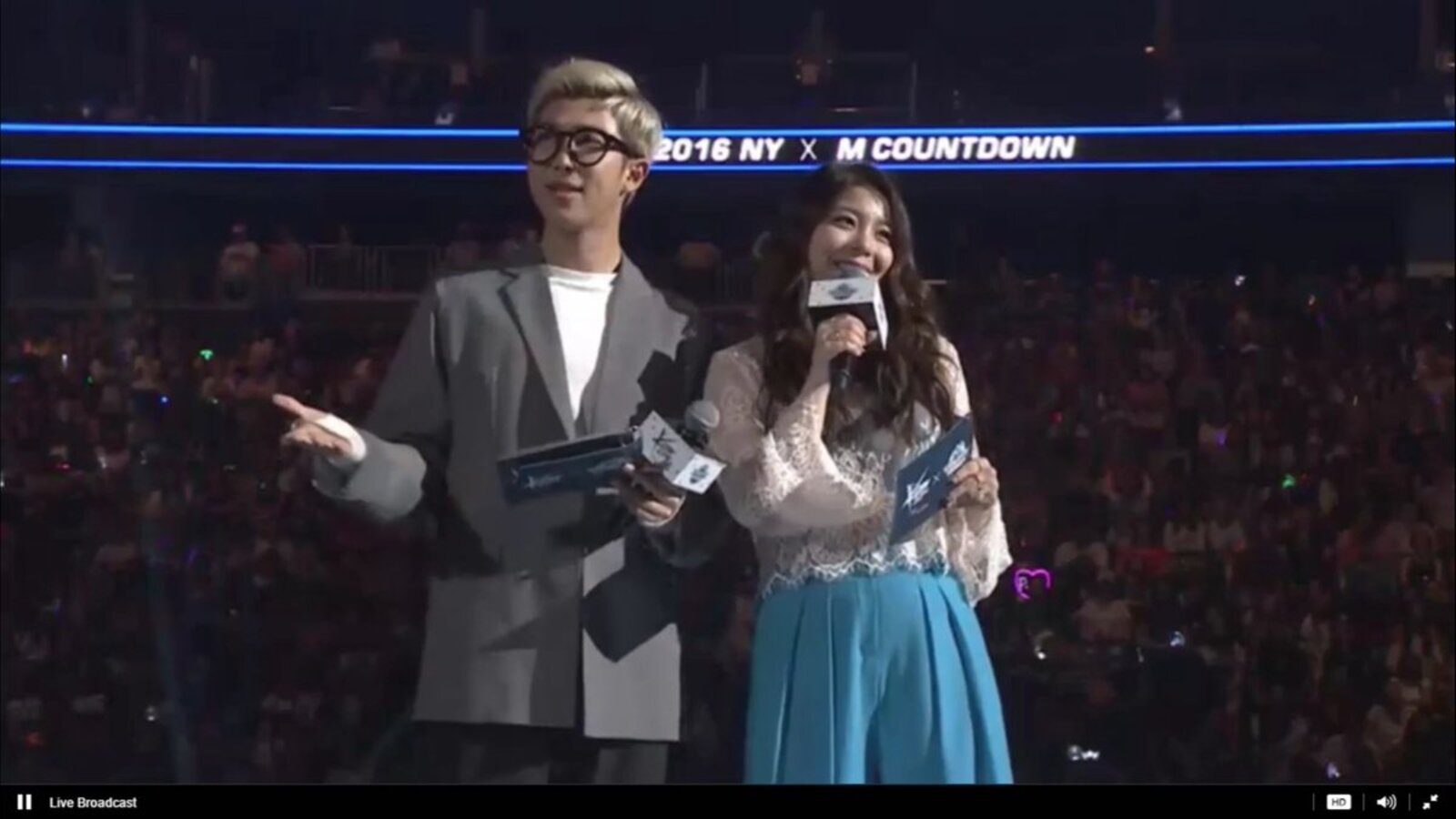 It has been argued that RM and Hwasa from MAMAMOO would make a great couple. Both focus on messages of self-love and have extraordinary stage presences. It’s possible they’d be a fantastic power couple.

What about RM and Hwasa themselves? Have they shown any inclination towards each other? Not exactly. In 2017 at the Seoul Music Awards, Hwasa started off an acceptance speech which RM clearly found charming by his chuckling reaction. When Hwasa later ended her group’s speech, RM was found performing a short bow like an awkward turtle, even though the rest of the room was clapping like normal people. 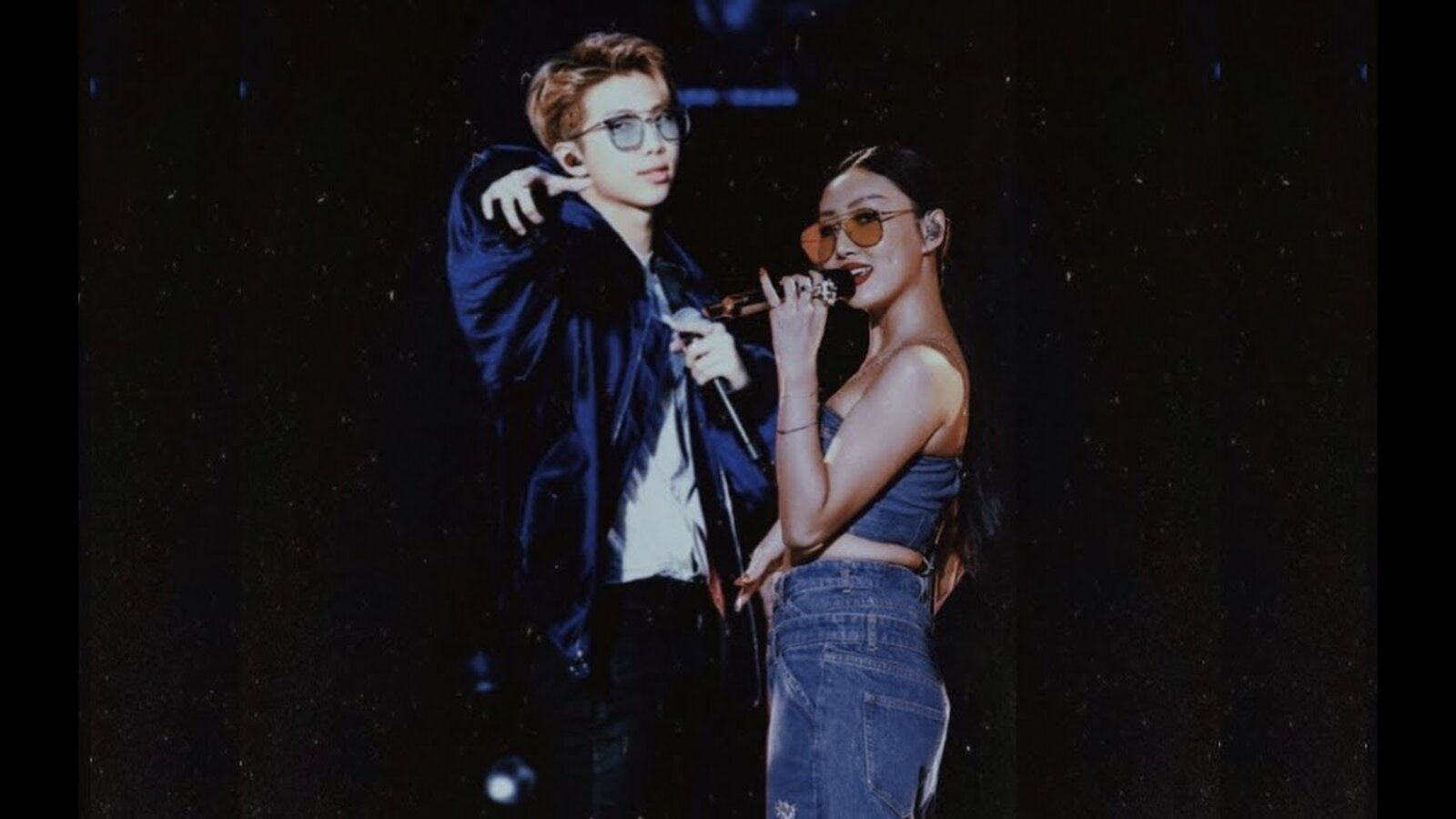 It’s like he felt so close to her that he thought they were the only ones in the room. Of course, we could be reading way too much into that, but RM’s behavior sure was funny. There was another instance during the same award show where RM doesn’t seem too invested in the MOBB performance – that is, until Hwasa comes on the screen.

For most of the performance he only bobs his head, but when Hwasa shows up on the monitor he starts mirroring her enthusiastic movements. We’re no psychologists but don’t you usually accidentally mirror people you like? Hey, we’re just sayin’. . . . 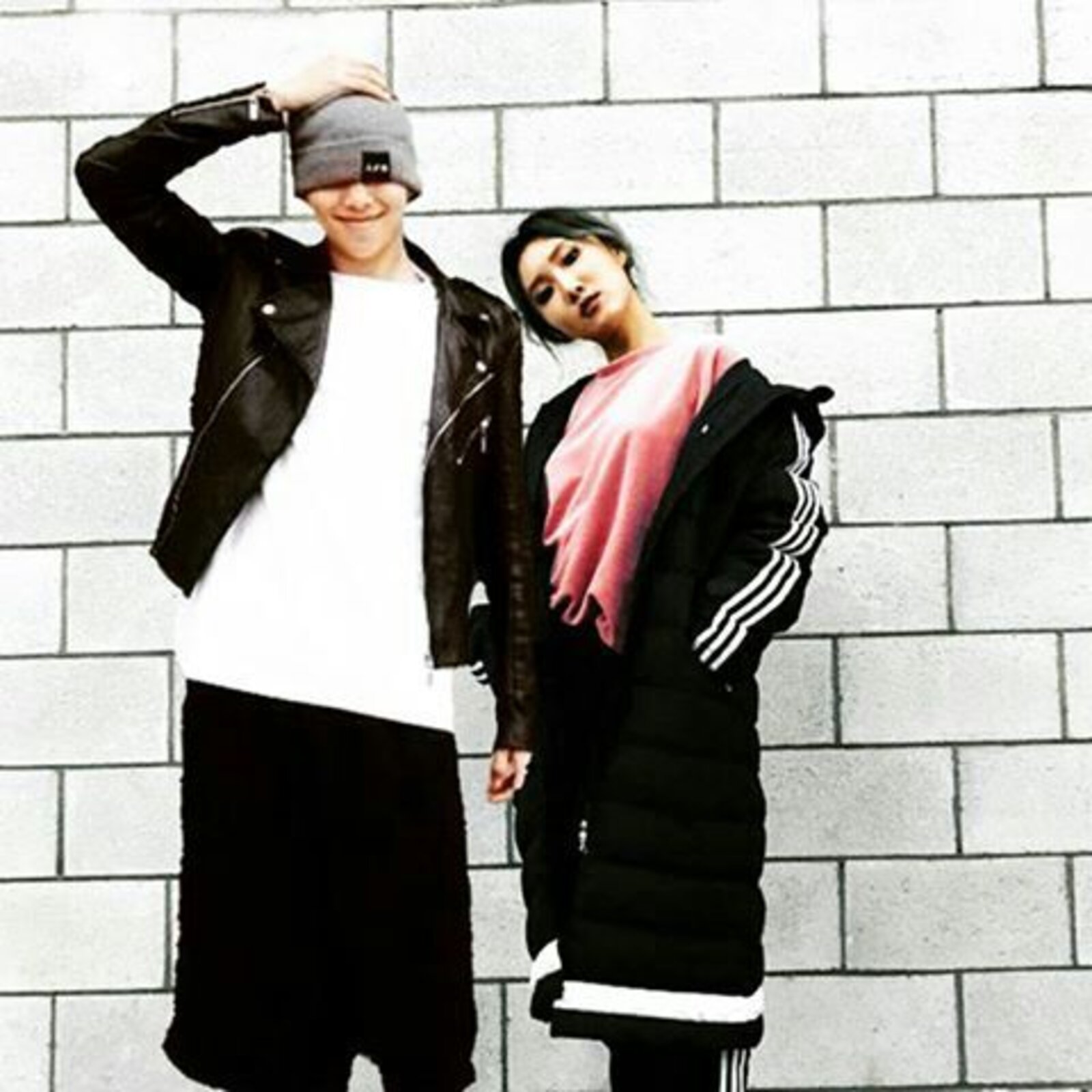 Does Chaeyoung from TWICE have a secret RM crush?

Sometimes rumors about romantic connections between celebrities are built on the silliest of things, even just the slightest look they’ve given each other. RM and Chaeyoung had a small moment of eye contact during MMA while he walked by a seated Chaeyoung.

In a fan video, someone points out Chaeyoung’s behavior as awkward because she seems to nervously fix her hair right as he passes by, but when their eyes lock for maybe a second the moment seems accidental at best. Chaeyoung whispers to another girl member once RM passes, but this could just be a matter of timing.

How many people would you be romantically linked with if an interaction like this constituted romantic incrimination? Sort of silly, huh, but it’s still fun to make up scenarios in our heads. Are there any RM romantic pairings we’ve missed out? Tell us in the comments.