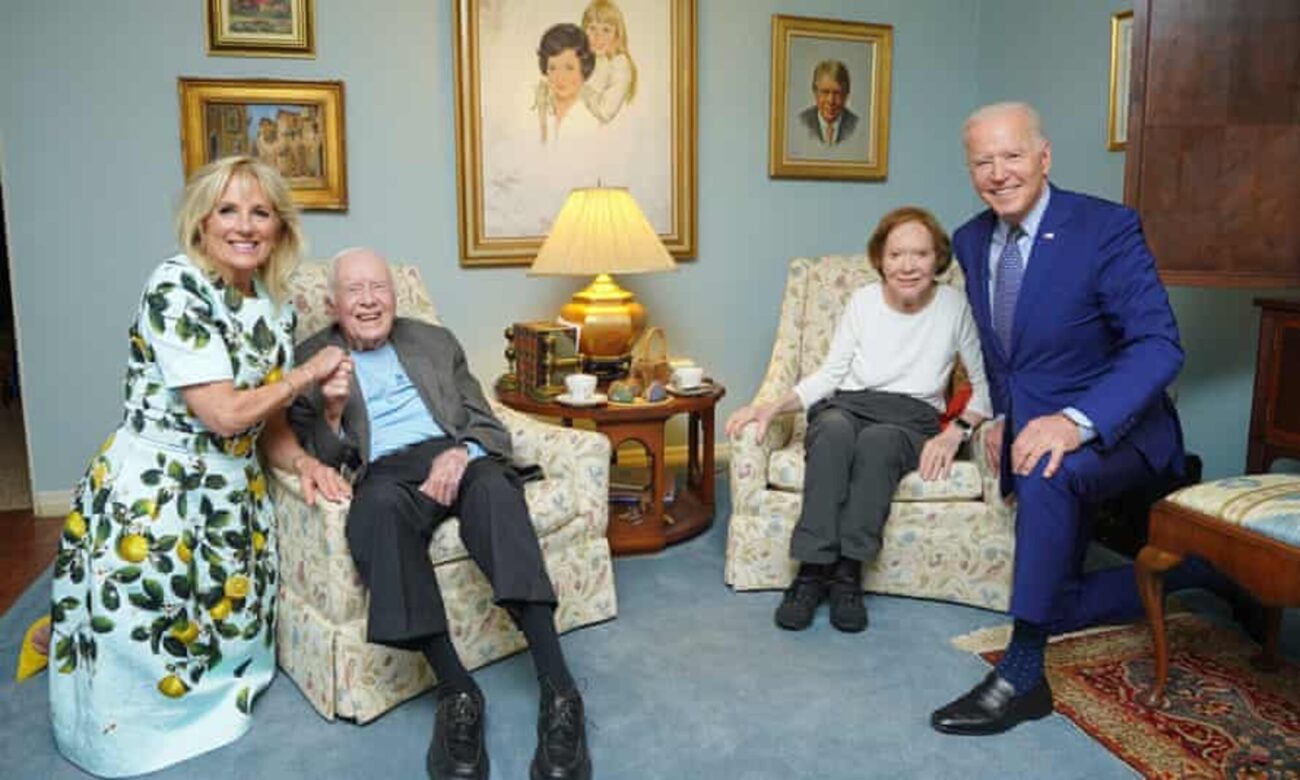 President Joe Biden and his wife and first lady Jill Biden met up with former President Jimmy Carter and former first lady and wife Rosalynn Carter in Georgia last week. It was the first time the two couples had met up since Biden officially became President. However, such a special event has now been overshadowed with some pretty hilarious memes thanks to the photo that was shared of the two couples.

Technically, it wasn’t the fault of the two couples at all, but rather just an awkward angle with probably even the wrong lens from the cameraperson, as the picture ended up looking a bit awkward. Somehow, the Bidens ended up looking two times the size of the Carters who were sitting down in chairs. Of course, such a funny pic calls for some hilarious memes on Twitter to match. Let’s take a look at some of the best ones here.

Overused term but this is actually Lynchian pic.twitter.com/UuFsUuSoWo

We do have to be honest, the way Joe Biden and his wife look in this picture compared to the Carters does look like a screencap straight out of a David Lynch film . . . surreal.

Of course, then someone just had to create this image as the cherry on top of it all. Now, it’s truly Lynchian.

The Bidens are 8 feet closer to the camera than the Carters. https://t.co/8VPqqPfeJM pic.twitter.com/yLEMF11VaU

Just how much closer are they?

We really want to know just how much closer Joe and his wife Jill Biden were to the camera compared to the Carters? Seriously, what was going on here?

There. I fixed it. pic.twitter.com/dmjLiX3oXk

Someone attempted to fix it, but we’ll be honest. . . Now the Carters just look awkwardly bigger than the Bidens.

This truly looks like Joe Biden and his wife visited the Carters in a dollhouse, right?

Not much room in there

Joe and Jill Biden were probably just walking around asking Jimmy and Rosalynn Carter where they kept their Oompa Loompas.

Seriously, the Carters look fun-sized in this photo.

All they needed were the Elf costumes and the resemblance would have been spot-on.

It must have been tough walking in and out of the house.

It looks like they're in one of these rooms LMAO https://t.co/3xUrXoAAk7 pic.twitter.com/Gt8ydQodI5

Did they happen to take this photo while on a trip to a Museum of Illusions?