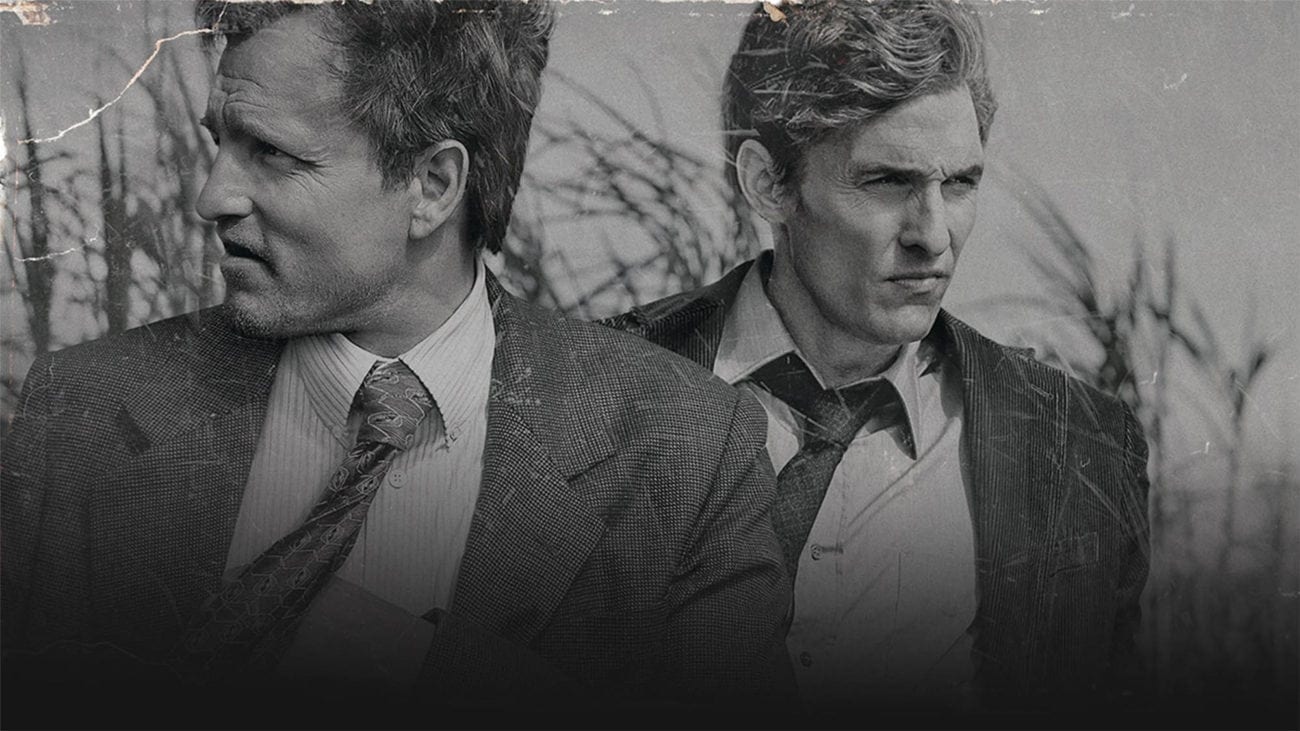 “The light’s winning”: Your guide to ‘True Detective’ S3

When season one of HBO’s True Detective hit our screens back in 2014, our lives changed. Ushering in a new form of storytelling, the crime detective show in which Matthew McConaughey (Dallas Buyers Club) and Woody Harrelson (Zombieland) play a pair of mismatched homicide detectives named Rust Cohle and Marty Hart – both cynical but in very opposing ways – was and still is quite simply one of the most affecting mystery narratives in recent times, one that hints at evil conspiracies lurking just beyond the frame. A gripping hunt for a serial killer is shrouded in a mood that is vivid, macabre, and deeply unsettling, which writer-creator Nic Pizzolatto (The Magnificent Seven) pushed with a powerful, intelligent dialogue.

So blown away were we by this masterfully executed mystery that when season two dropped, we were more than a little disappointed. Starring Vince Vaughn (Wedding Crashers), the roaring lion had transformed into something with no bite, serving up a predictable solution in a show that had been overproduced. Despite an all-star cast, it simply fell flat, something which HBO’s president of programming Michael Lombardo took the fall for, stating the execs had rushed Pizzolatto into producing. “To deliver, in a very short time frame, something that became very challenging to deliver. That’s not what that show is. He had to reinvent the wheel, so to speak. Find his muse. And so I think that’s what I learned from it. Don’t do that anymore.”

It appears Lombardo and the HBO bigwigs certainly have learned from their mistakes, providing Pizzolatto that time he needed to “find his muse” for S3, as the cast members including new boy Jon Tenney (Tombstone) claim the show is returning to its roots for the third round. “I can’t get into real specifics, but I think it does move a little bit in the direction of season one . . . The scripts are just so compelling.” Thank the Lord. Obviously the proof is in the pudding, but quite frankly we can’t wait to stuff our faces with said pudding when season three of the show drops. To keep yourself up to date, here’s everything the green-eared spaghetti monster has revealed about S3 of True Detective so far.

The only downside is that we don’t have an official release date, although HBO has confirmed S3 will drop at some point in 2019. However, perhaps we should just feel grateful we’re getting a third season at all considering the previous installment was such a flop and the network held off from announcing it for a mighty long time. As Cohle once said, “Well, once there was only dark. If you ask me, the light’s winning.” Damn straight, it is.

Plot and setting – “This place is like somebody’s memory of a town, and the memory is fading.”

Pizzolatto and the HBO execs are remaining pretty tight-lipped about the show’s plot, although an official synopsis reads: “The next instalment of True Detective tells the story of a macabre crime in the heart of the Ozarks, and a mystery that deepens over decades and plays out in three separate time periods.”

That’s on top of Jason Bateman’s broody Netflix drama Ozark – it appears the Midwest is really having its moment. We’re stoked the writers have chosen to play with time frames again. One of the most effective traits of S1 was the interweaving of the two stories set in 1995 and 2012, as the narrative moved back and forth to great effect. The team are taking this ambitious idea and adding another layer to its nonlinear storytelling by throwing a third decade into the mix.

Cast – “The world needs bad men. We keep the other bad men from the door.”

True Detective is pitched as an anthology show, meaning each season deals with a different story and a different set of characters. While we might pine for more of Cohle and Hart (or should we say, the talents of McConaughey and Harrelson), the TD team have gathered a fantastical ensemble cast so far, including Moonlight’s Oscar-winning star Mahershala Ali who will play the lead role of Wayne Hays – a state police detective from Northwest Arkansas.

Meanwhile: Carmen Ejogo (Selma) will play female lead Amelia Reardon, “an Arkansas school teacher with a connection to two missing children in 1980”; Stephen Dorff (Blade) will play Roland West, “an Arkansas State Investigator whose career has been influenced by a baffling crime”; Scoot McNairy (Monsters) will play Tom, “a father who suffers a terrible loss that ties his fate to that of two state police detectives over ten years”; and Mamie Gummer (The Ward) will play Lucy Purcell, “a mother of two children who finds herself involved in a crime.” Other stars to join the ranks include Ray Fisher (Justice League), Michael Greyeyes (The New World), and Brandon Flynn (13 Reasons Why).

Writers and directors – “Well, once there was only dark. If you ask me, the light’s winning.”

As said, Pizzolatto will be back on board putting pen to paper (this time without the execs breathing down his neck whilst tapping their wrist watches). However, according to The Hollywood Reporter, he’ll also be taking on the talents of Deadwood creator David Milch who Pizzolatto will team up with to co-write episode four, which we can only assume will be a pivotal moment in the season.

Over to the director’s seat and as TV Guide pointed out, “Part of the magic of season one was that one man, Cary Joji Fukunaga, directed the whole thing, and he had a very clear vision for what the show was supposed to be. Season two had six directors, and the vision got muddled.” Meeting in the middle, there are three souls behind S3. Green Room’s Jeremy Saulnier will direct the first two episodes, while the remainder will be directed by House’s Daniel Sackheim and Pizzolatto himself.