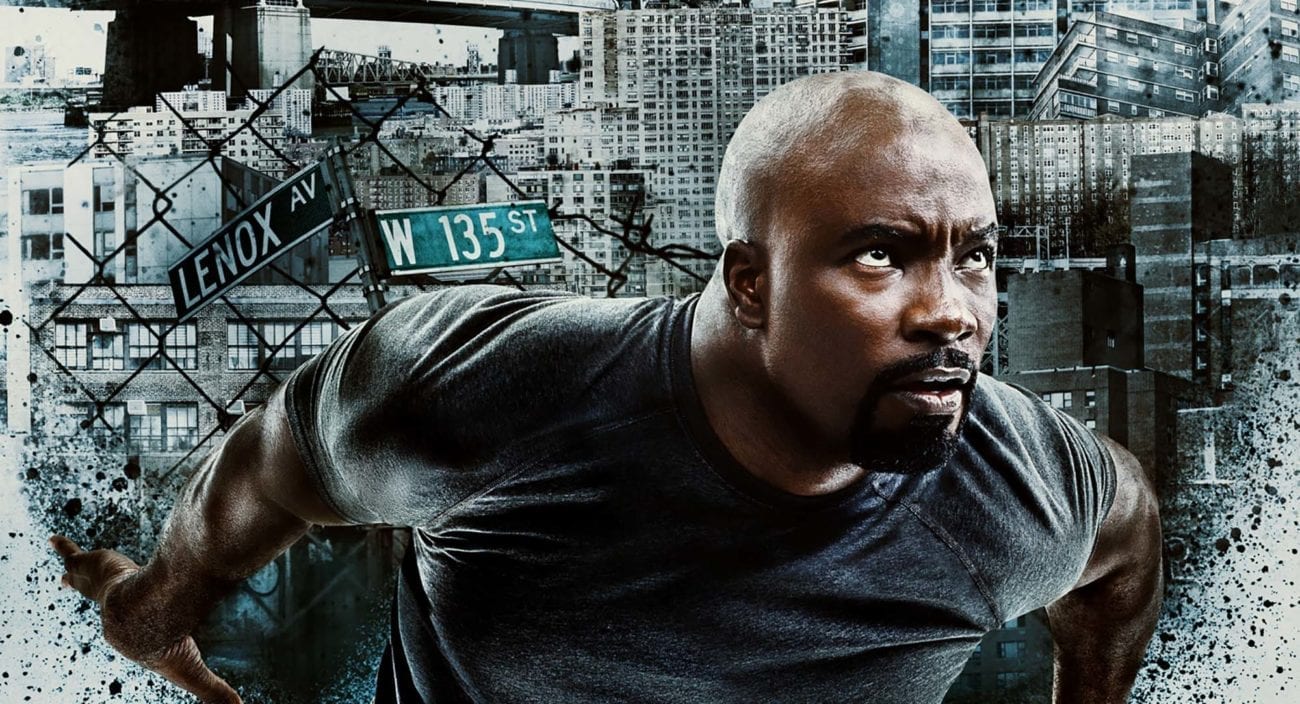 Heroes for Hire? Everything you need to know about ‘Luke Cage’ S2

We’re fast approaching the premiere of S2 of Luke Cage in which Harlem’s bulletproof saviour (played by Mike Colter) will face a whole new batch of villains and treachery while protecting the place he calls home. We’re hyped for the return of one of Marvel’s best TV shows, so here’s everything we know about S2 of Luke Cage worth getting excited for.

There are some hella interesting new villains joining S2

Mustafa Shakir (Brawl in Cell Block 99) will be playing John McIver a.k.a. Bushmaster in S2 of the show, described as being a “natural leader, brimming with charisma, whose mission is focused on Harlem and vengeance.” As the trailer proves, Bushmaster is also bulletproof and boasts that sort of power that causes serious physical damage to Luke. As Bobby Fish (Ron Cephas Jones) concedes in the trailer clip, anyone who can take Luke on “bare handed can’t be any good for Harlem.” Meanwhile, Gabrielle Dennis (Insecure) will play Tilda Johnson a.k.a. Nightshade, described as being “a brilliant, holistic doctor with a complicated history in Harlem where, as much as she tries to stay far from trouble, it seems to always find her.” If that description hardly sounds villainous, you’re probably correct. Currently it’s uncertain whether the character is going to be an anti-hero or a true villain, but we’re intrigued either way.

But the villains don’t stop there, folks! In an interesting twist, Annabella Sciorra (The Hand That Rocks the Cradle) is to play Rosalie Carbone who will be familiar to all Marvel Comic fans and particularly those who love any involving The Punisher. The character is described as “a dangerous downtown criminal underworld power player with an eye, and an agenda, toward Harlem,” which sounds like Cage is going to have his work cut out for him. Given what how significant Carbon is in The Punisher canon, we’re going to go right ahead and excitedly speculate that everyone’s fave skull tee wearing army veteran (played by the delicious Jon Bernthal) could be teaming up with Luke at a later date – hell, he may even make a guest appearance in S2 and we’re here for it. Showrunner Cheo Hodari Coker enthused about Sciorra’s role, “you haven’t seen her this gangster since her thrilling turn as Tony’s formidable flame Gloria Trillo on S3 of The Sopranos.” We can’t wait!

All of your faves are returning

Reassuringly, everyone’s beloved ass-kicking nurse Claire Temple (Rosario Dawson) is returning to S2 of the show and continuing what looks to be a troubled relationship with the bulletproof hero. Meanwhile Misty Knight (Simone Missick) is also back to stick the boot in against some bad guys along with the help of a prosthetic arm (kindly paid for by Rand Enterprises). As the trailer spotlights, Mariah Dillard (Alfre Woodard) is stepping up to replace her late cousin Cottonmouth and is to become the “queen” she believes Harlem needs, while Shades (Theo Rossi) also looks to be cooking up his nefarious schemes. In the comics, Bushmaster has teamed up with the likes of Shades (“Hoodlums for Hire” style) so it’s possible that could be the goal for the S1 villain this time around.

If we’re all being honest, nobody really likes Danny Rand (Finn Jones), but we’re hoping with a little bit of friendship and mentoring from Luke about how to be a bit more chill and likeable, Iron Fist could become a legit superhero worth caring about. Apparently, Danny’s skills might also come in handy for Luke too. According to Empire, Coker suggested Danny will be helping “Luke channel his chi” and take his fighting style to the next level. Colter also teased that a “a little Heroes for Hire” team up between the two is on the cards for the second season. In the comics of course, Danny & Luke create Heroes for Hire to make some much needed dollar from being superheros.

Daughters of the Dragon could also be happening this season

But isn’t just Danny and Luke who may enjoy a powerful collaboration in S2. With Misty’s new bionic prosthetic arm there’s a chance she may become as powerful as she is in the comics where it grants her the power of superhuman strength, magnetism, and technopathy. During The Defenders there were a fair few moments of bonding between Misty and Colleen Wing (Jessica Henwick) that seemed to tease they may team up to form the almighty Daughters of the Dragon vigilante duo.

If you thought Harlem’s hottest nightclub was at peak coolness in S1, just wait until you see what the criminal hive and hotspot has planned for S2. Artists due to appear at the club this season include KRS-One, Ghostface Killah, Faith Evans, Jadakiss, Stephen Marley, Gary Clark Jr., and Esperanza Spalding. We want front row seats to all of them.

In a statement shared by Buzzfeed, Lucy Liu (Charlie’s Angels) called it “an honor to work with such a passionate and fearless team” while executive producer Jeph Loeb (Heroes) praised her directorial vision for the first episode. “When you’re dealing with a bulletproof man, it helps if you have a bulletproof director. Lucy brings a keen eye, a superb sense of story, and an obvious love of actors. She is rocking Luke Cage 2.”

Come on now, folks. If you don’t have June 22 highlighted on every calendar you own, you’re doing Netflix all wrong. S2 of Luke Cage drops on that day and you’re definitely going to want to binge it in one go.