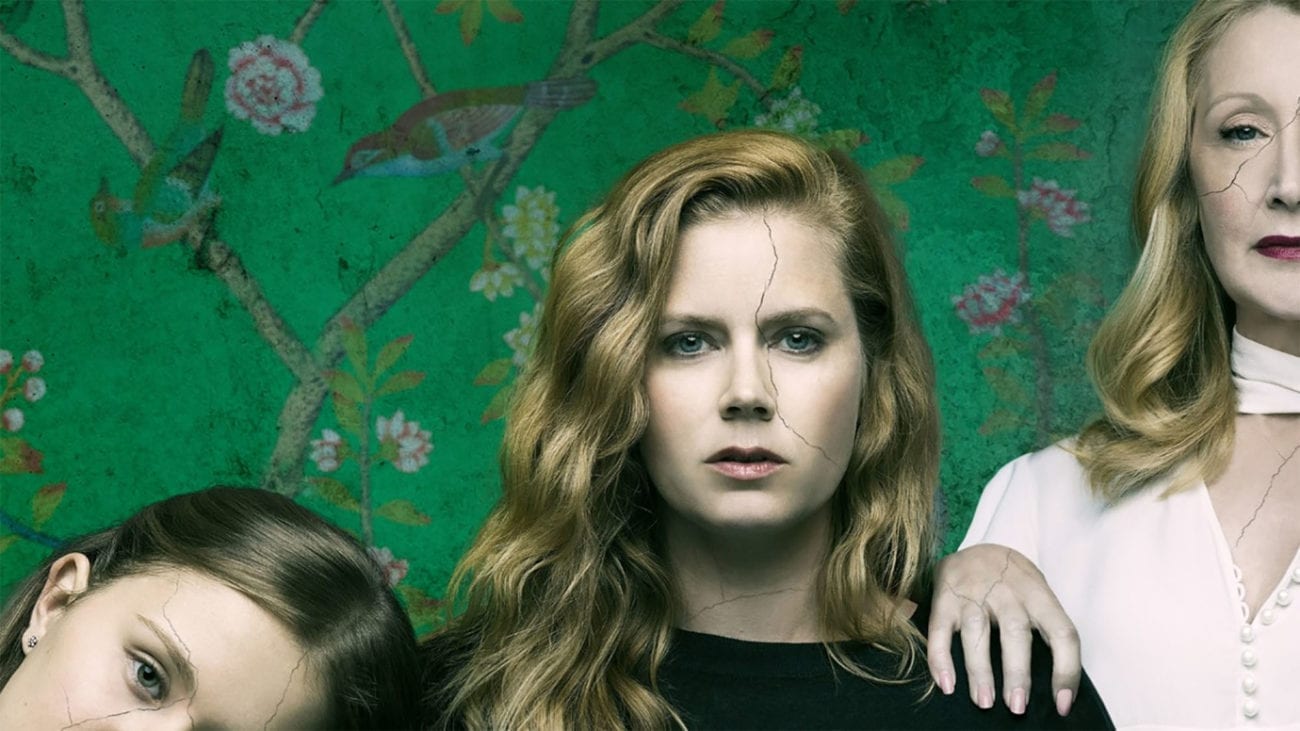 Fans of gritty crime dramas have a good reason to be excited – we’re just days away from the season premiere of HBO’s Sharp Objects, and with it already drawing comparisons to such neo-noirs as True Detective and satirical crime dramas as Big Little Lies, it sounds every bit the prestige mind puzzle we’ve been waiting for this summer. Ahead of its premiere on July 8, we’re taking a look at everything you need to know about the show, including cast, characters, crew, and what to expect from its promising lead – the Oscar-winning actress Amy Adams.

What’s it all about?

If you weren’t hyped enough already, the forthcoming miniseries is based on the 2006 novel of the same name by Gone Girl author Gillian Flynn, who’s worked closely with the production team to create this undeniably creepy eight-episode show. The story centers on journalist Camille Preaker (Adams) as she reluctantly returns to her hometown of Wind Gap, Missouri, to investigate the murders of two pre-teen girls. While staying with her mother, Camille is forced to confront some personal demons of her own. According to Book Hub, the adaptation stays close to the book and promises to be just as twisted.

When it comes to Sharp Objects, there’s a talented ole bunch behind the camera. In addition to Flynn – who worked closely with Adams for the project and contributed to the scripts – you’ve got UnReal co-creator Marti Noxon as showrunner and co-writer and Wild helmer Jean-Marc Vallée, who will direct all episodes just as he did with HBO’s hit limited series Big Little Lies. Meanwhile, Blumhouse Productions, the company behind Get Out and The Purge, is producing the series. According to Deadline, Noxon, Flynn, Vallée, Adams, and Vallée’s producing partner Nathan Ross executive-produced the show along with with Blumhouse Productions’s Jason Blum, Charles Layton, and Jessica Rhoades. Told you it’s a talented ole bunch!

Now we’ve met the crew, it’s time to look at the characters. Of course we’re stoked about Adams’s Camille, but more on her role in a minute. First up, we’re turning our attention to the Hollywood heavyweights who make up the core cast.

As Refinery29 put it, “Adora Crellin is the character Patricia Clarkson was born to play.” As Camille’s mother and heir to a pig farm fortune, she does not have to work and is all about keeping up appearances. “Being a superficial woman, Adora wants Camille to stop sleuthing around looking unkempt, drinking past midnight with men, and asking ‘inappropriate’ questions to the grieving families of Wind Gap.”

Just like Adams, actor Chris Messina gets to explore his dark side in his role as the detective assigned to investigate the murders the two girls. Unlike Adams’s Camille, he is unaware of Wind Gap’s hostile environment and struggles with it as he attempts to solve the case.

As we’re shown flashbacks of Camille’s teenagehood in Wind Gap, it’s It star Sophia Lillis who takes the role of the character in her youthful years.

Newcomer Eliza Scanlen will stand in as Camille’s 13-year-old half-sister, Amma Crellin. Like most teens her age, she wants to rebel against her mother’s strict rules.

Yes, Matt Craven (Justified) will be taking the role of Vickery – the police chief of Wind Gap. As an officer who likes to keep town in check, he’s not too happy about Willis & Camille seeking to disrupt the seemingly peaceful community.

Actor Taylor John Smith (You Get Me) will perform as older brother of Natalie Keene, who was the second murder victim. With a rather shaky alibi, he is suspected by some of the locals as having played a part in the crime.

As mentioned, Adams’s Camille is a complex character with a dark past. Prior to returning to Wind Gap, she’d been committed to an institution for self harm. Combine her dark traits with the mysterious murder investigation and her work alongside detective Willis and you can see why the show has been compared to True Detective. We’ve got high hopes for Adams, with early reviews purporting the show to be “anchored” by her “shattering performance.”

Flynn herself said she was confident in the casting for the show, specifically the decision to take on Adams in the role of the troubled antihero, adding that she “really trusted her” with the part. And apparently the admiration works two ways, as Adams is a huge fan of Flynn’s work, telling Entertainment Weekly: “I was a big admirer of her work and the way that she examined female characters. So this was a wonderful opportunity to explore one of Gillian’s beautiful, non-heroic heroines. Sometimes we only play women as heroic, and it’s nice to see somebody who’s heroic but completely flawed and imperfect.” Elaborating on this idea, The Hollywood Reporter described how Sharp Objects enters a landscape in which such darkness traditionally has been reserved for male leads, with programming president, Casey Bloys, telling the publication: “I can’t think of a more complicated female lead. There are a lot of celebrated, self-destructive male leads out there, but it’s going be very interesting to see a woman really wrestling with her demons like that.”

Elsewhere, Variety’s review described Adams as “operating at the peak of her abilities,” adding, “Adams, her voice dropped an octave, slowed to a drawl, and sharpened with distrust, is simply superb; her character’s trajectory, an eddy around the drain as she drowns, needs an actress with the resourcefulness to surprise us.”

As mentioned, the reviews have heavily praised the show ahead of its release. Variety continued with its comment on Adams’s performance by outlining how it was a necessary element in a story that could, thanks to the baroqueness of its twists, too easily be all shock and little value. However, thanks to a culmination of elements, “Sharp Objects is dazzlingly itself, a show in thrall to the horror of its premise but one that finds nuance within unremitting darkness.”

In The Hollywood Reporter’s review, Vallée’s visual language and Adams’s ferociously wounded performance are pointed out as being key drivers to the show’s success, making it haunting and riveting — both prestige and pulp. “Something of a summer popcorn thriller for grownups, Sharp Objects builds its sense of unease as it goes, leading with a “Who’s killing Wind Gap’s girls?” question before really making you care about Camille, a character who seems to start at rock bottom, but still has terrifying room to fall.”

Although season one hasn’t even hit our screens yet, word is that Flynn isn’t ruling out a second run. While this is exciting news in itself, for now let’s turn our focus to the premiere of Sharp Objects and wrap our heads around its mysteries as they unfurl over the next month. Popcorn at the ready!