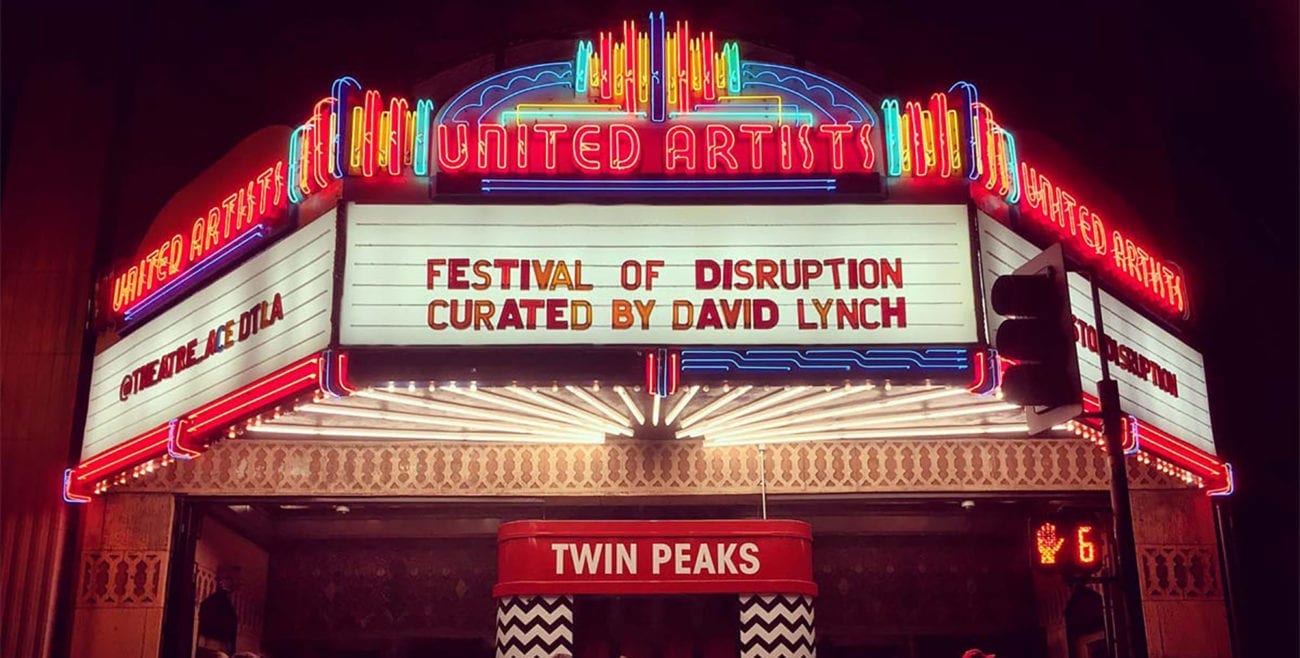 David Lynch has announced his Festival of Disruption 2018 lineup and as you can probably already guess, it’s absolutely dynamite. The festival is returning to Los Angeles’s legendary Ace Hotel on October 13 and 14, with Lynch’s personally curated lineup of musicians, filmmakers, and artists taking to the stage “to share ideas and inspire creativity”. Here’s everything you need to know about this year’s event and – for the newcomers among you – a little bit of background about what Festival of Disruption is all about.

The event also took place at the Ace and was a benefit for the David Lynch Foundation – a charity the singular auteur launched in 2005 to promote Transcendental Meditation. At this point, Lynch is renowned for being an advocate of the practice and has used twice-daily meditations as an instrument for his creativity and Festival of Disruption continues to promote the practice and to raise funds for the foundation.

But wait – what exactly does the David Lynch Foundation do?

The foundation helps to promote the use of Transcendental Meditation, bringing the practice to military vets, victims of domestic violence, school students, and others. When discussing how the practice helps children in high-risk areas relieve stress and improve their school performance, Lynch told the LA Times, “The side-effect is negativity starts to recede. So they see things like stress and anxiety and tension and sadness, depression, hate, anger, fear start to lift away automatically. It’s like gold coming in from within, and garbage going out.” The foundation has attracted major support from a number of celebrities like Tom Hanks and Paul McCartney, but crucially, it’s also reportedly “taught a half-million children how to meditate.”

According to Lynch, the festival is “a weekend of different things hitting people and hopefully thrilling people”

Executive producer Erik Martin also told the LA Times that artists are invited by Lynch to the festival if their work “hits him in the gut,” with the director reportedly telling Martin that the lineup “can’t be boring, and they have to leave with some knowledge and mystery.” Apparently the whole thing “stems from Lynch’s mind,” all of which explains why the festival lineup is consistently so eclectic and fitting with the filmmaker’s singular vibe and vision.

What to look forward to from Festival of Disruption 2018

So many treats, friends! The music portion of the lineup includes Mike Patton, Arcade Fire’s Richard Reed Parry, and a performance of the Twin Peaks suite by the Dover Quartet. Jeff Goldblum (Jurassic Park) will also be leading his jazz ensemble The Mildred Snitzer Orchestra at the festival, while Wu-Tang Clan’s RZA will be staging a very special live scoring of the 1978 kung fu film The 36th Chamber of Shaolin. Plus – as if all of that isn’t amazing enough as it is – Sigur Rós’ Jónsi, Alex Somers, and Paul Corley will also be hosting their Liminal soundbath project.

On top of that, legendary director Francis Ford Coppola will host a screening of his Robin Williams-led 1996 film Jack along with a Q&A session. Grace Jones will present her documentary Bloodlight and Bami, and both Carrie Brownstein and Barry Gifford will be delivering talks. And of course, the man himself will be appearing for a Q&A alongside his usual spread of coffee and donuts.