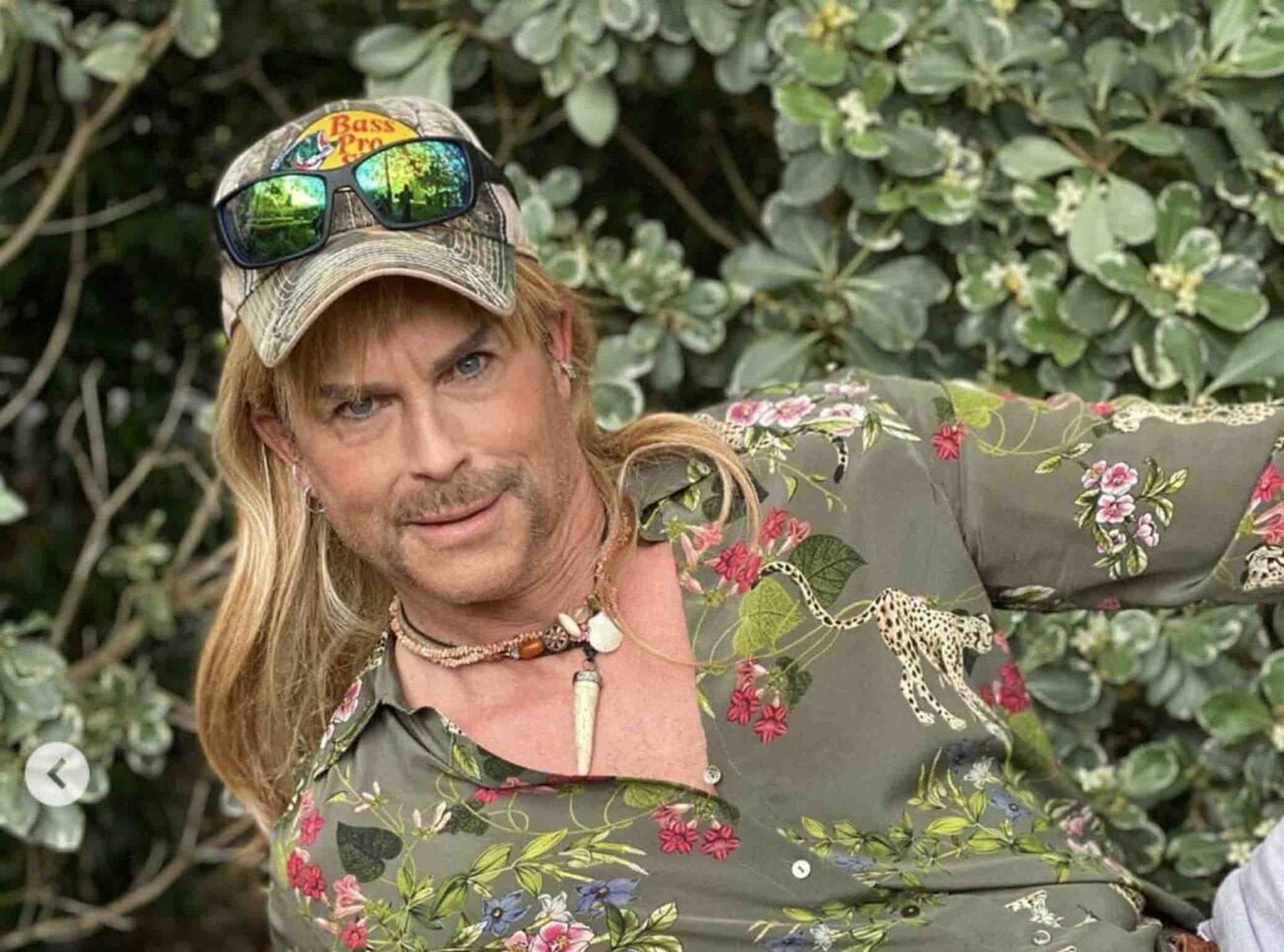 Halloween is over and we’re already beginning to find ourselves humming Christmas songs under our breath. But before we go into full jolly jingle bell mode, we wanted to take a look at some of the best Tiger King Halloween costumes. Why? Well, because everyone knew in spring that Joe Exotic and Carole Baskin were going to be the “it” costume of the year, so we just have to do a round-up of all the best versions.

From celebrities to everyday people, Tiger King themed costumes were extremely popular. We’ve searched for all the best ones, and some of them are down right impressive.

Alas, many celeb Joe Exotic costumes didn’t make the cut for this list because, while bored in quarantine, they dressed up in spring or summer and this list is to celebrate Halloween costumes. Here are the best Tiger King Halloween outfits. 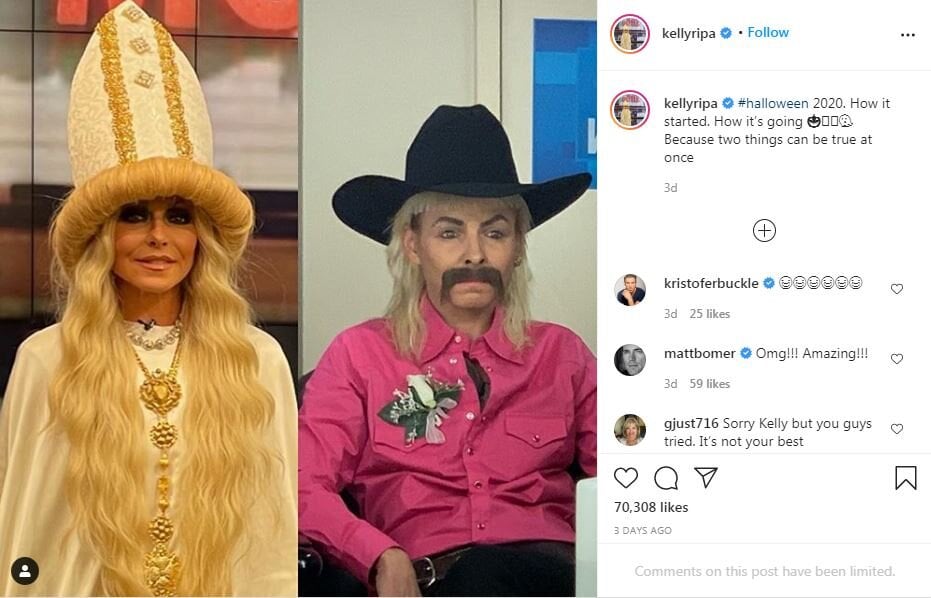 Kelly Ripa posted a picture of herself in two different costumes on October 31. Moira Rose from Schitt’s Creek (which she totally nailed) and Joe Exotic of Tiger King fame. Upon concept, Ripa as Exotic may not sound like it would work, and yet there’s something about her costume that brings us endless delight.

Country singer & songwriter Jason Aldean dressed up as Joe Exotic, but he really went the extra mile. Not only did he go for the knee brace & single crutch look, but he created an entire music video for one of the song’s the real life Joe Exotic wrote & sang – with a limp and everything.

On top of that, his wife dressed as one of Exotic’s husbands, and in another post you can see their two kids dressed as a white tiger & the world’s cutest version of Carole Baskin. (Apologies to the real Baskin.) 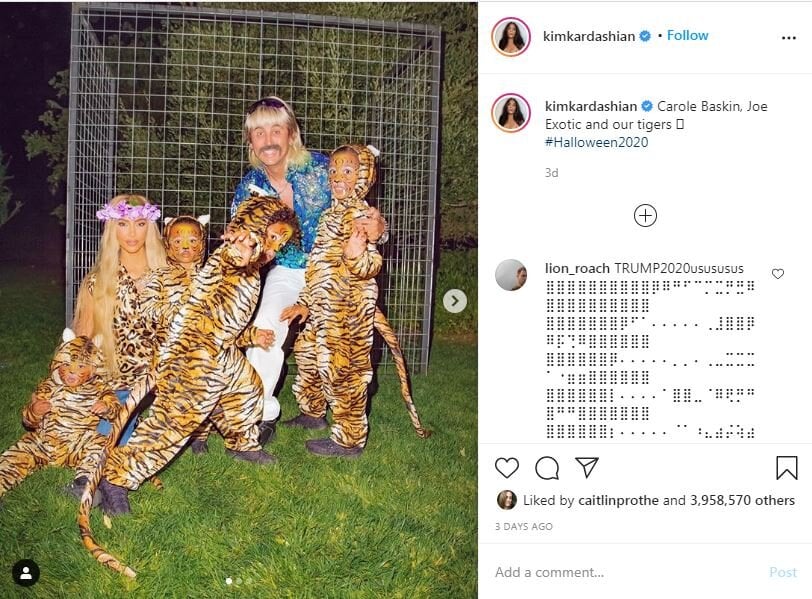 Kim Kardashian always knows how to pique the interest of the internet and her Halloween costume this year proves she hasn’t lost her touch. Instead of a racy costume (something most people would have expected from her) she opted for a pretty darn accurate version of Carole Baskin. Her four kids are all dressed up in tiger costumes and her good friend Jonathan Cheban was Joe Exotic. (Oh, and this group dress-up session is being said to have cost $6,400.)

I know there will be a lot of Tiger King themed Halloween costumes this year, but I'm pretty sure my uncle as Carole Baskin is the winner.😂😂😂 pic.twitter.com/gMFybu7upd

This Twitter user posted a picture of their uncle dressed as Carole Baskin, and honestly, if he had shaved his beard and we only glanced at the pic we may have assumed this was the real deal.

Big thanks to @Bankojw for allowing me to rope him into helping me out completing the look pic.twitter.com/guc7ekcjNP

We’re loving this couple costume consisting of Joe Exotic and a tiger. The sparkly pink shirt was a fabulous choice and the fuzzy bodysuit is cute as heck.

This couple’s costume features both a Carole Baskin & a Joe Exotic and we’re living for this alternate universe where the two look like smiley happy friends. Also the costumes really nail the vibes of both people.

Make the mask work for you

We love this picture not just because the Baskin and Exotic costumes are great, but because the man dressed as Exotic really made his mandatory face mask help his costume rather than hinder it. It makes him look even more like Joe Exotic than he otherwise would have.

So what do you think? Which Tiger King themed costume is your favorite? Do you think dressing up as the popular “it” costume of the year is a good idea or boring? Let us know in the comments below!