‘Sanditon’ fans are determined: Why they want a second season, part 2

Fandoms can be a force to be reckoned with, and the Sanditon fandom is no different. From thoughtful characters to wonderful acting, we’ve fallen in love with the PBS show, and we’ll fight for it. We are determined to see this great show get another season, so our beloved Jane Austen characters can have their happy endings.

We’ve already written one article with explanations from fans on why they felt the show’s ending was abhorrent, and thus why the show needs a second season. However, this fanbase is a dedicated one, and they have since made so many more wonderful points on why the show deserves its happily ever after, we’ve put together another collection of their tweets. 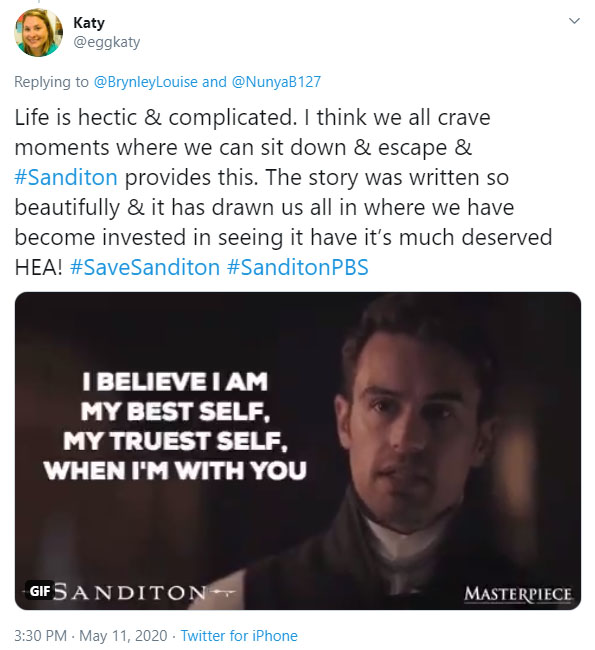 Let’s face it, the world isn’t a very fun place sometimes, and right now it’s pretty scary. Sanditon allows for escapism into a world where the biggest concerns are whether you’re falling in love or if a new seaside town can be built. 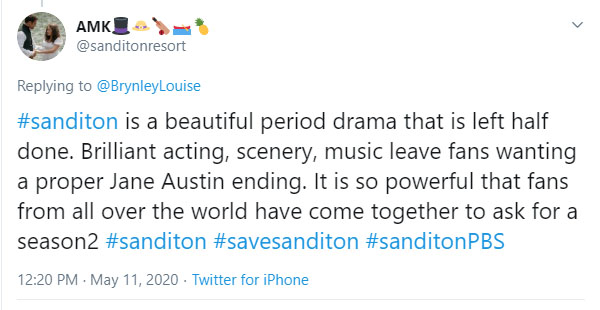 It’s hard to believe PBS can ignore the rallying cry of so many people stretched across the globe asking for more of their show. Especially since we aren’t asking for five more seasons and a movie, we’re asking for one more season to finish the story properly. 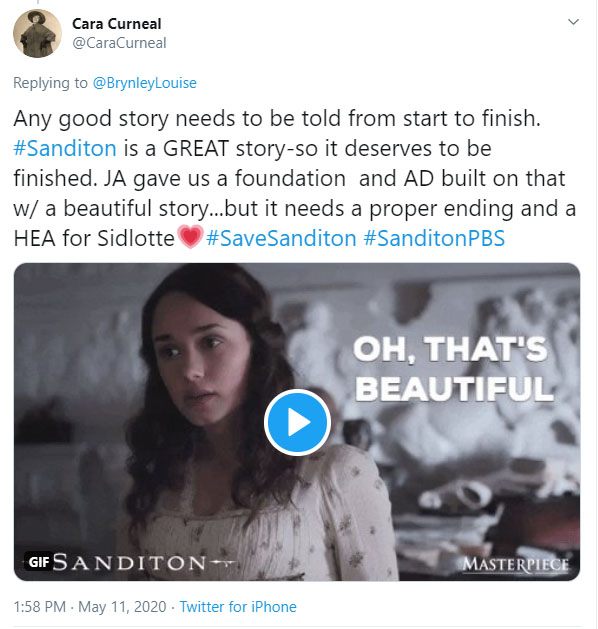 Storytelling 101 teaches everyone a story needs a beginning, a middle, and an end. At the moment Sanditon is left smack dab in the middle. 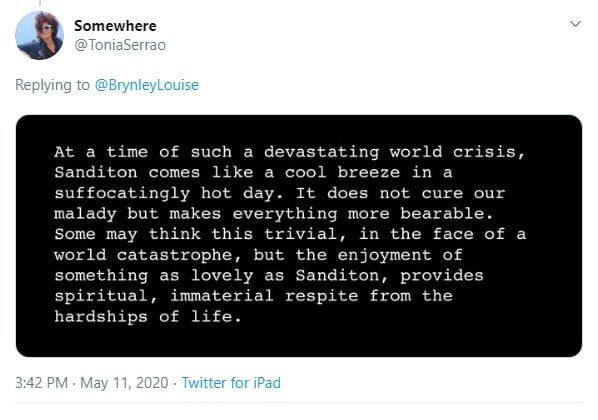 Just look at a history book, you must enjoy the small things and celebrate what you can in the face of difficult historical events. Sanditon has become one of those things for many people, and the simple hope of seeing a happy ending is a driving force for many. 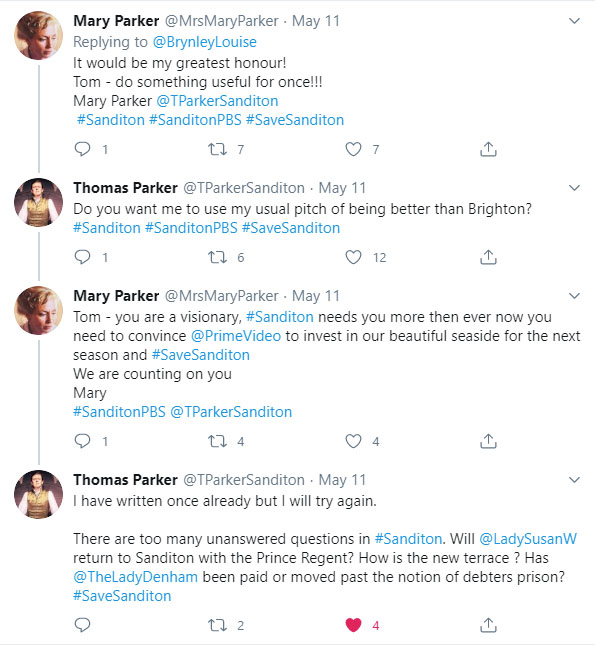 This exchange on Twitter is by two roleplaying accounts, who are acting as the characters Tom and Mary Parker. The fans are so invested in the story and the characters, some of them are becoming them in their time off. It’s truly a sweet and heartwarming thing to behold.

Not to mention, you can practically hear the characters when you read these tweets. 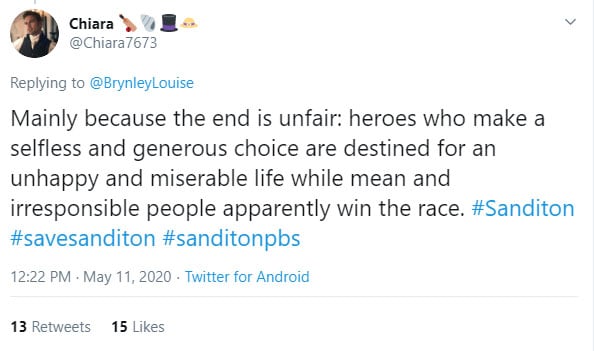 We’ve all heard “life isn’t fair”, but you know what? This doesn’t mean our stories have to be unfair too. Stories are supposed to be karmic, the bad people are punished, and the good are rewarded. As of the ending of season one, the story is almost completely unbalanced – with the only exception being Esther’s happy ending. 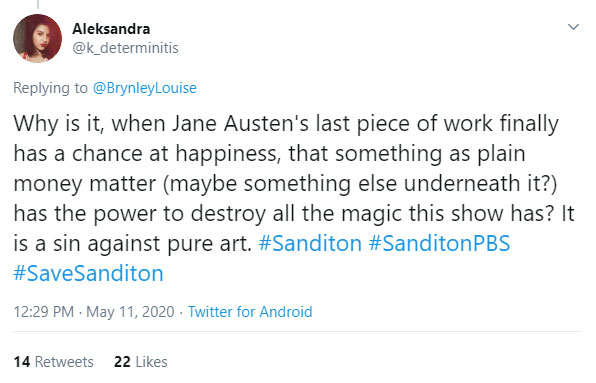 Money over all else? 💰

Sure, Sidney is getting married for money to save his brother from bankruptcy, but he is still marrying for money. This is entirely against Jane Austen’s own values. 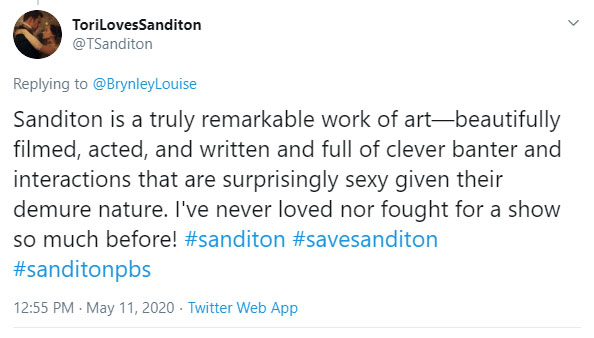 This show has spoken to some in ways a show never has before – it has incited a passion they didn’t know they had for television stories. Some people even tweeted saying they made a Twitter account solely for the purpose of advocating for Sanditon to get another season. 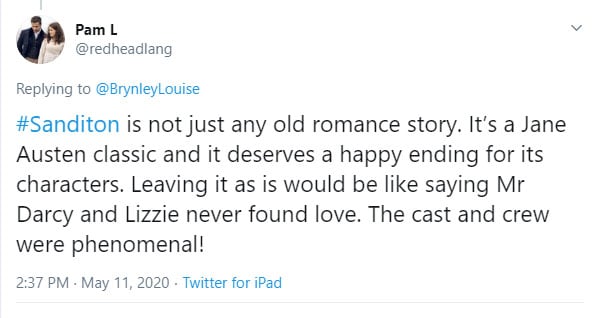 Even people who aren’t ardent fans of Jane Austen know the story of Pride and Prejudice, and it’s pretty safe to bet the idea of Lizzie and Darcy not getting together, even for them, would be gutting.

A careful balance of the past and the present has made a timeless story even more relevant and relatable to today’s audiences. 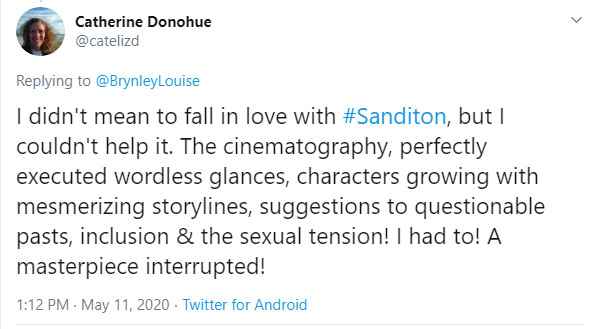 You know it’s true love when you didn’t mean to fall in love, but here you are head over heels. In fact, it’s the exact same way Charlotte fell in love.

The world is a mixed up, messed up place, but it doesn’t mean our stories have to be too. If PBS won’t finish their story, then maybe someone else can. Whoever finishes it will surely benefit. If you look back at all these screenshots almost every single person has changed their username and profile picture to be Sanditon related.

They’ve changed their online identities in order to keep fighting for the show. It may seem a simple act, but it’s a powerful one.