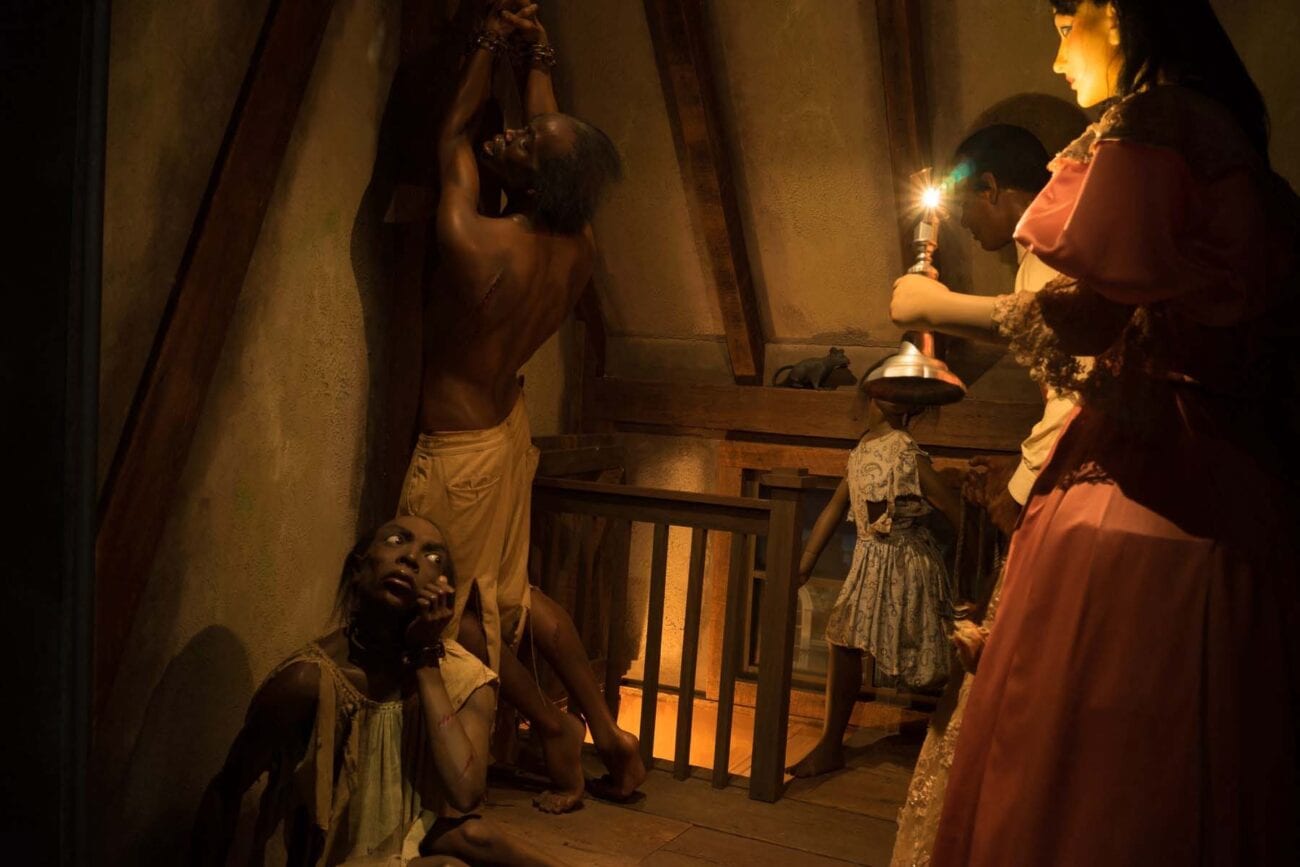 Slaveowner Madame LaLaurie: Was she the first modern serial killer?

When one thinks of serial killers, one doesn’t often think of slave owners. But if you really think about it, it’s hard to say why not. Millions of black people died at the hands of slavery, whether it was in the process of being transported to the “New World” or during the severe brutality that followed.

When the definition of serial killing (a series of two or more murders, committed as separate events) is applied as simply as possible, plenty of folks were serial killers during the time of slavery. Some were more cruel than others. Madame LaLaurie was one of those who took pleasure in the cruelty she could inflict on her slaves, not that she revealed this to genteel society. 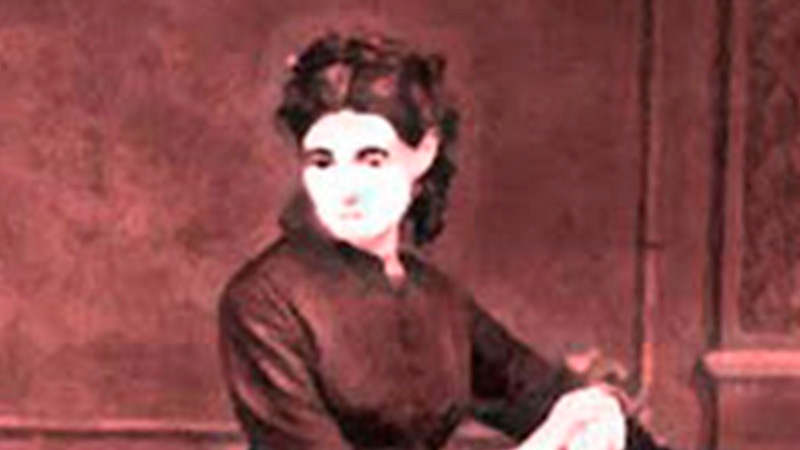 Outwardly, Madame LaLaurie was the picture of loveliness and kindness. She lived in New Orleans during an interesting time. The Haitian Revolution of 1791 had shown other slaves that liberation was possible. Their revolution declared to other dark-skinned folk that they were capable of seizing their own destinies.

For this reason, some of the white people of Madame LaLaurie’s time were very wary of their own slaves, fearing a local uprising. One of LaLaurie’s own uncles was killed by his slaves. The result was an iron grip on the lives of the slave population, but Madame LaLaurie took this to an extreme. The remnants of her home would come to be known as the most haunted place in New Orleans. 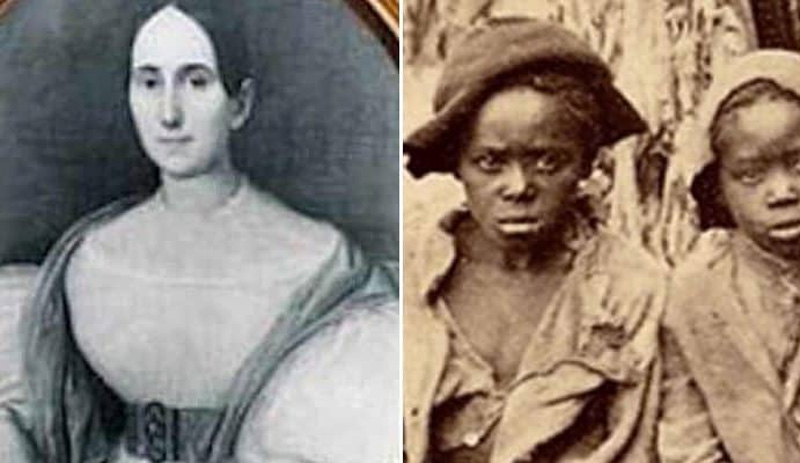 Madame LaLaurie in all her wretch glory

Madame LaLaurie’s full name was Delphine LaLaurie. She was born in 1780 as the daughter of an Irish father & French mother, and her family was well connected. She became a distinguished French Creole aristocrat who was well known for her grace and beauty. She married three times. Once to a Spanish royal officer, next to a banker, and lastly to a doctor named Louis LaLaurie.

It is suspected that in addition to her generally wealthy upbringing, the fact that she had been widowed twice left Madame LaLaurie with a sum of money hefty enough to build herself a mansion in the French Quarter. It was the tallest building on the street in her time and she made sure to connect it to the slave quarters.

None of her neighbors were aware of the misery that took place inside 1140 Royal Street. From the outside, it looked like a beautiful place to live. Madame LaLaurie knew well how to keep up appearances. She acted graciously toward black people on the street and appeared to be concerned for the health of her own slaves. Little did the people of New Orleans know, her home was a hellhole. 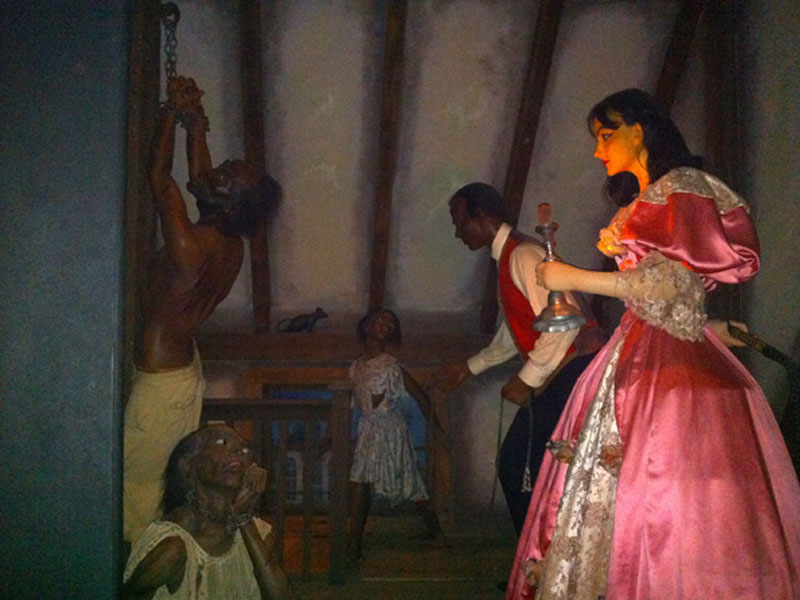 Twelve of Madame LaLaurie’s slaves died for unknown reasons and by 1833 it was becoming harder for Madame LaLaurie to hide her sadistic side. Rumors were going around that she liked to abuse her slaves. Suspicion of her mistreatment became so widespread that a lawyer was dispatched to Madame LaLaurie’s mansion to remind her of laws regarding the upkeep of slaves.

It’s too bad this had no effect on Madame LaLaurie’s behavior. She continued to mistreat her slaves. Perhaps the eeriest part about Madame LaLaurie’s abuse was that no one could really verify what she was doing to them. The terrors going on in the mansion were a complete mystery to the community. The domino effect of a few events would have to happen before all was revealed. 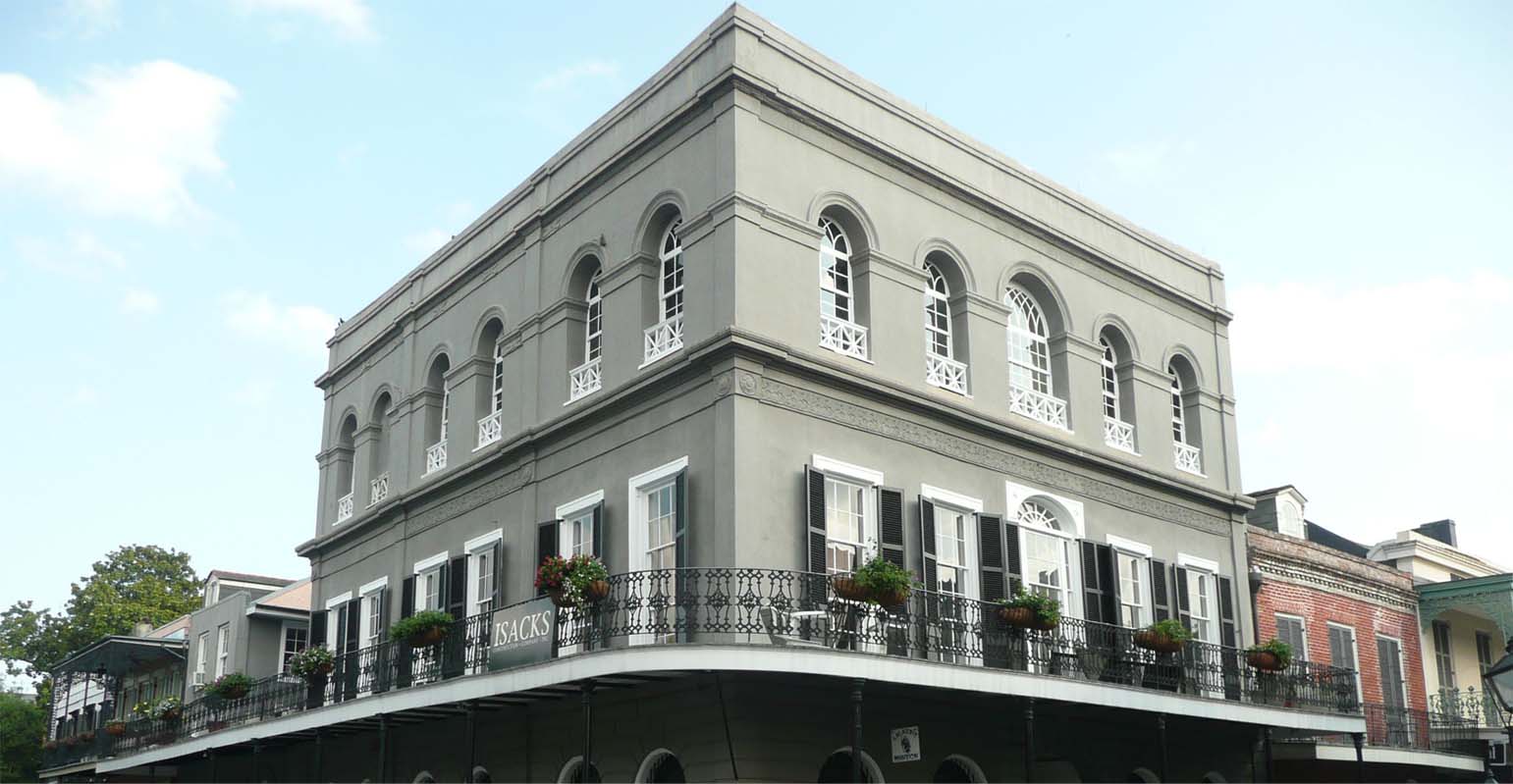 A merciful plunge to death

One day, a twelve-year-old slave girl named Lia was brushing Madame LaLaurie’s hair. Legend has it that Lia hit a snaggle of hair mid-stroke, and that Madame LaLaurie became enraged. Lia, terrified and fully aware of the horrors Madame LaLaurie inflicted on slaves she was displeased with, fled for her life. Whip in hand and seething, Madame LaLaurie gave chase. Lia fled first to the second story and then to the rooftop.

What happened next has been ruled debatable. Some contend Madame LaLaurie pushed Lia off, while others say the girl jumped to her death of her own free will because she was afraid. An English sociologist named Harriet Martineau interviewed the community years later about Madame LaLaurie. She wrote that a neighbor who observed the scene described it like so: 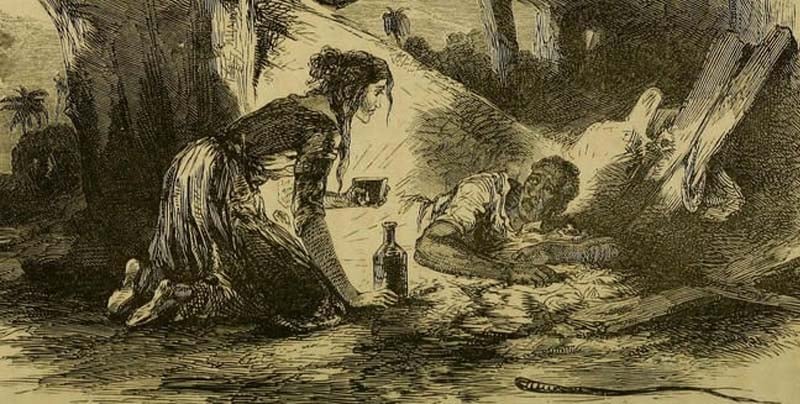 “Seeing the child about to spring over, the witness put her hands before her eyes: but she heard the fall, and saw the child taken up, her body bending and limbs hanging as if every bone in her body was broken. The lady watched for many hours, and at night she the body brought out, a shallow hole dug by torchlight in the corner of the yard, and the body covered over.”

After that, an investigation was finally conducted on Madame LaLaurie and the court found her guilty of cruelty against nine slaves. She was forced to pay a fine and to give up the nine slaves she had committed crimes against. Unfortunately, the treacherous woman later convinced the relatives to whom the slaves had been given to sell them back to her.

Little Lia suffered a merciful fate compared to that of the slaves Madame LaLaurie bought back. 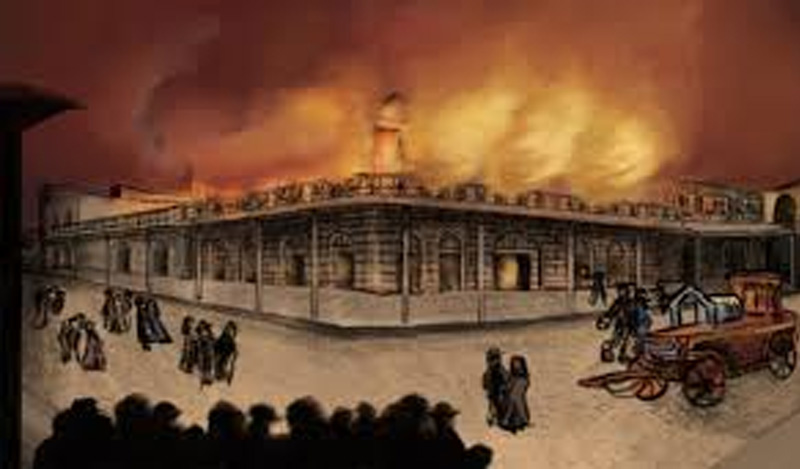 The fire in Madame LaLaurie’s mansion

With luck, she could save her fellow slaves from future torture at the hands of Madame LaLaurie. Unfortunately, luck was not on the cook’s side that day. Local police and firefighters helped put out the fire before it could spread too far. The cook survived. While Madame LaLaurie was moaning about her precious furniture, the police tended to and interviewed the slave cook who confessed her intentions.

This brave woman would finally help reveal the horrors that occurred in Madame LaLaurie’s house. The cook told authorities that slaves who ended up in some of the mansion’s upper rooms never returned. When the local citizens heard this, they took it upon themselves to investigate. Madame LaLaurie and her husband refused to give them the key to the locked slaves quarters, so they broke the door down. 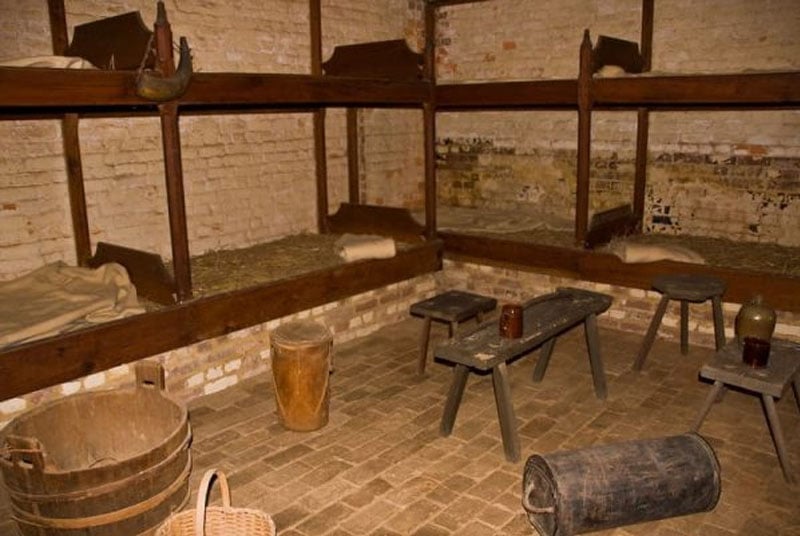 What they found was a scene none of their worst nightmares could have conjured. A local newspaper called the New Orleans Bee reported, “Seven slaves more or less horribly mutilated were seen suspended by the neck, with their limbs apparently stretched and torn from one extremity to the other.”

Their bodies were covered in scars and filled with worms. Out of the nine slaves Madame LaLaurie had bought back, one was seen with a large hole in his head. 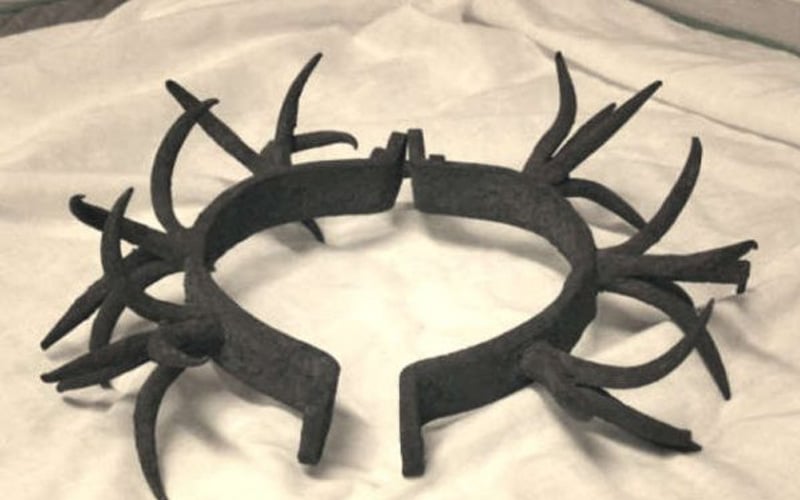 Martineau writes, “A horrible sight met their eyes. Of the nine slaves, the skeletons of two were afterward found poked into the ground; the other seven could scarcely be recognized as human. Their faces had the wildness of famine, and their bones were coming through the skin.

They were chained and tied in constrained postures; some on their knees, some with their hands above their heads. They had iron collars with spikes which kept their heads in one position. The cowhide, stiff with blood, hung against the wall; and there was a step-ladder on which this fiend stood while flogging her victims, in order to lay on the lashes with more effect.” 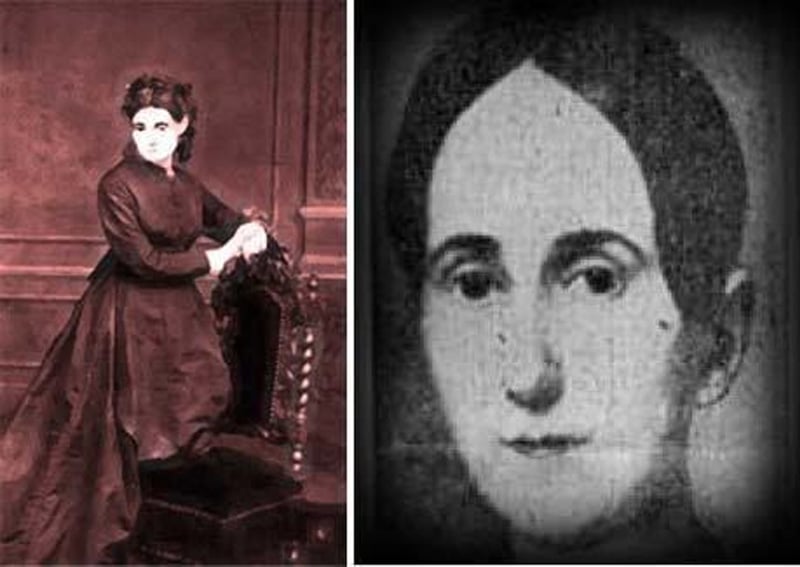 Madame LaLaurie is run out of town

Both white people and people of color were appalled and outraged by what was taking place in Madame LaLaurie’s mansion. A mob descended upon the house. Over the course of a few days the place was completely gutted and destroyed. 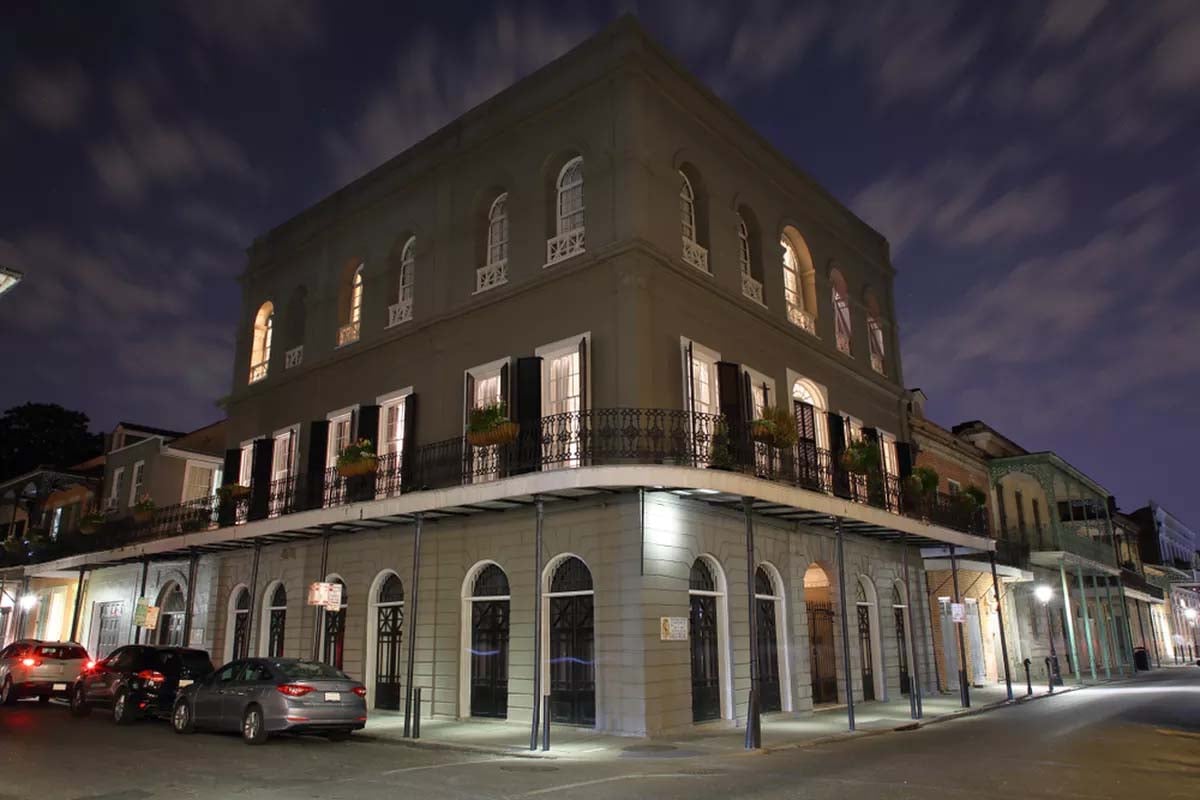 Madame LaLaurie’s wicked legacy lives on. The story of her horrible deeds is still discussed today and a tour of her mansion, which is thought to be very haunted, is an excursion, tourists often enjoy. American Horror Story even featured Madame LaLaurie’s story in their “Coven” season. She’s said to have board games and video games modeled after her as well.

As tales of her vileness live on, we’re sure many hope that her soul never rests in peace.