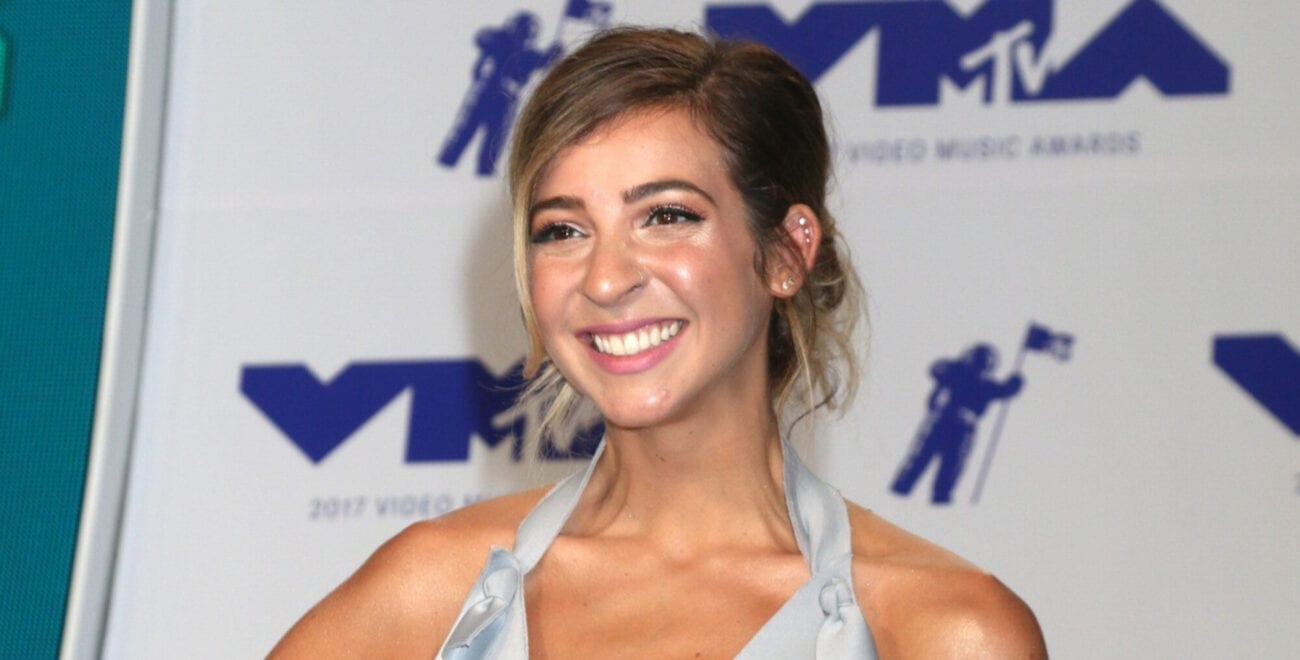 Gabbie Hanna: Why is the YouTuber starting drama over her poems?

If you keep up with YouTuber/social media influencer news, then we’re sure you know all about Gabbie Hanna and how the star just can’t seem to avoid drama. In fact, she’s had quite a history with being the one to ignite the fire on her public social media platforms, so what’s going on now? It turns out that Gabbie Hanna is starting some drama over some criticism she has received from her poems.

On her Twitter account, Gabbie Hanna has called out a certain book critic YouTuber who has created numerous videos of her critiquing Gabbie’s poems throughout the years. Of course, the star did this to get the Twitter world involved, but did her plan backfire? So far, it seems that most people are against her on the timeline, not the other way around. Read all the tea on this mess of a situation here.

First, let’s start with Gabbie Hanna and her poems. Just which ones are causing controversy? Well, all the way back in 2017, the YouTuber published a poetry book titled Adultolescence, and it even became a New York Times Bestseller. However, while the book received high success in sales, the poetry inside was met with tons of criticism from both social media users and critical reviewers.

Unfortunately, the poems of Gabbie Hanna were slandered and mocked all over the web, with some of them even becoming memes, just like some of the poems of milk and honey by Rupi Kaur. So while Adultolescence was a smash hit by the general public, it was for all the wrong reasons. The criticism then reached Rachel Oates, a book critic YouTuber, who has created plenty of videos reviewing the social media star’s poetry.

So now this is where the drama all begins. Just yesterday on April 19th, Gabbie Hanna decided to fight back and create drama by calling out creators such as Rachel Oates for criticizing her work. Since then, tons of back-and-forth shady comments have been exchanged by both parties, and tons of fans have gotten involved.

i still can’t believe i wrote a funny, engaging, thematic poetry book about sexual assault, mortality, childhood abuse, mental illness & suicidal ideation as my first release— and all people cared to share was “link in bio” and “family is relatives” pic.twitter.com/tCLGnoavCm

On April 19th, Gabbie Hanna spoke out against the criticism she has received since the release of her poems, and wrote: “i still can’t believe i wrote a funny, engaging, thematic poetry book about sexual assault, mortality, childhood abuse, mental illness & suicidal ideation as my first release— and all people cared to share was ‘link in bio’ and ‘family is relatives’”. Included with the tweet were four photos of poems from her book.

Gabbie Hanna then added: “the internet is full of a bunch of unempathetic, manipulative, money-hungry losers. i’m done letting MYSELF feel bad about that”, along with four more photos of her poems. Soon though, the star name-dropped Rachel Oates specifically by sharing screenshots of the videos the critic made of her.

Gabbie Hanna wrote: “I also just wanna say that Rachel Oatmeal took the time to write a book from the perspective of a dog (since I write mine from the perspective of an abused child) to mock me, yet she’s still too much of coward to release under her own name. What a *loser* lmao”. She then posted the tweets to her IG story and tagged Rachel, and then called her “manipulative” and “narcissistic”. 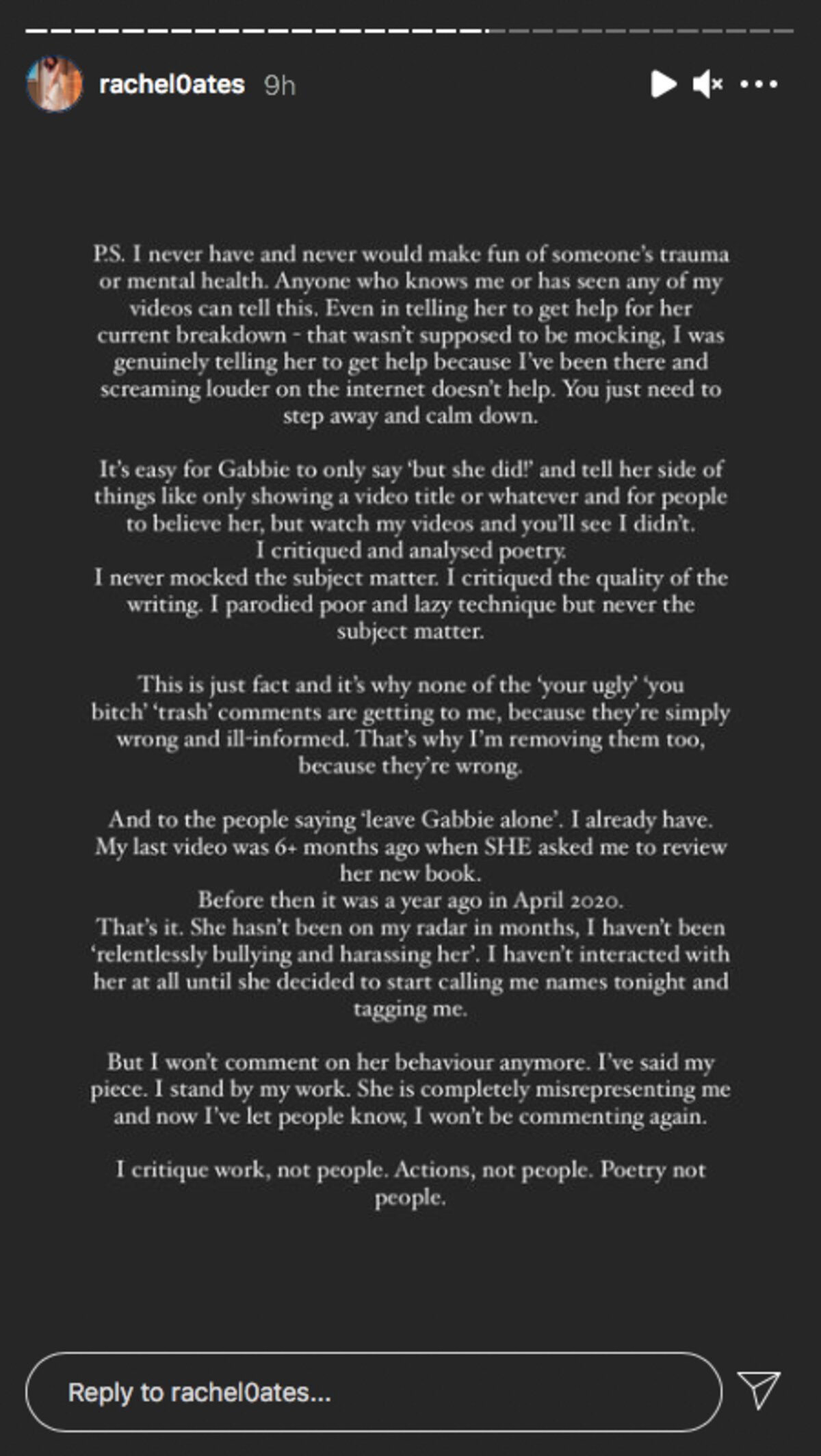 Soon enough, Rachel herself responded on Instagram, resharing the posts to her account and writing: “Oh look, she’s creating drama again by tagging me in posts telling ME of all people, I ‘don’t understand neurodivergent brains’. It’s been a month since I reviewed any of her work, just accept the constructive criticism and write better”.

Rachel then shared a DM she sent to Gabbie, which read: “Leave me out of your attention seeking games and go get some help please. Clearly you’re having some sort of breakdown again and I understand, I’ve been there too, but this won’t help. Please, just go speak to your friends of family and calm down”.

The book critic YouTuber then shared a longer statement on her Instagram story, which emphasized that she “never critiqued the subject matter”, but solely “the quality of the writing”. She then added that Gabbie Hanna was “completely misrepresenting me and now I’ve let people know, I won’t be commenting again”.

Gabbie Hanna goes after Angelika Oles after Angelika comments on the situation. Gabbie says “so standing up to a bully is bullying them? … shut the f*ck up angelika, get back to law school.” pic.twitter.com/msIqqC33kw

Of course, other folks got involved in this messy situation, including fellow YouTuber Angelika Oles who defended Rachel Oates. Gabbie Hanna however, took this as another attack and slammed back at her. The exchange can be found on this Twitter thread above, and yes, it gets really juicy.

Who do you think is in the right or wrong in this situation? Let us know in the comments. 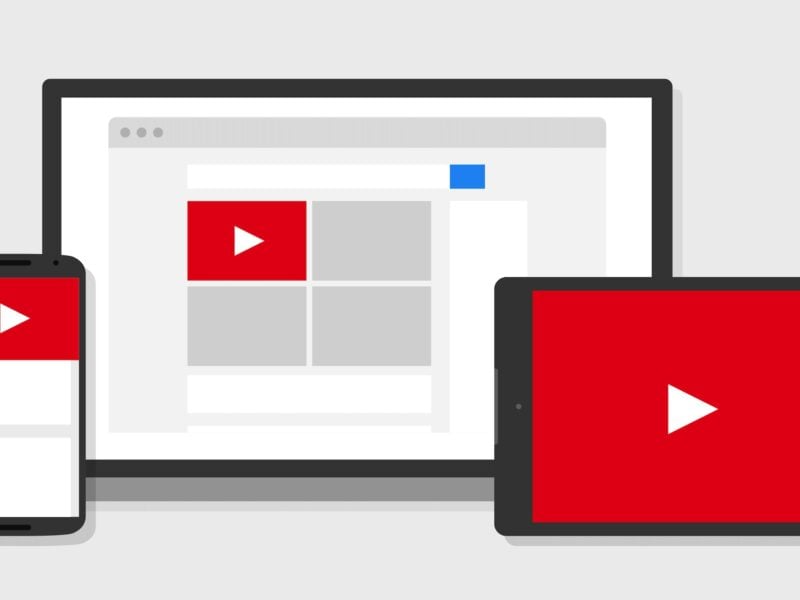