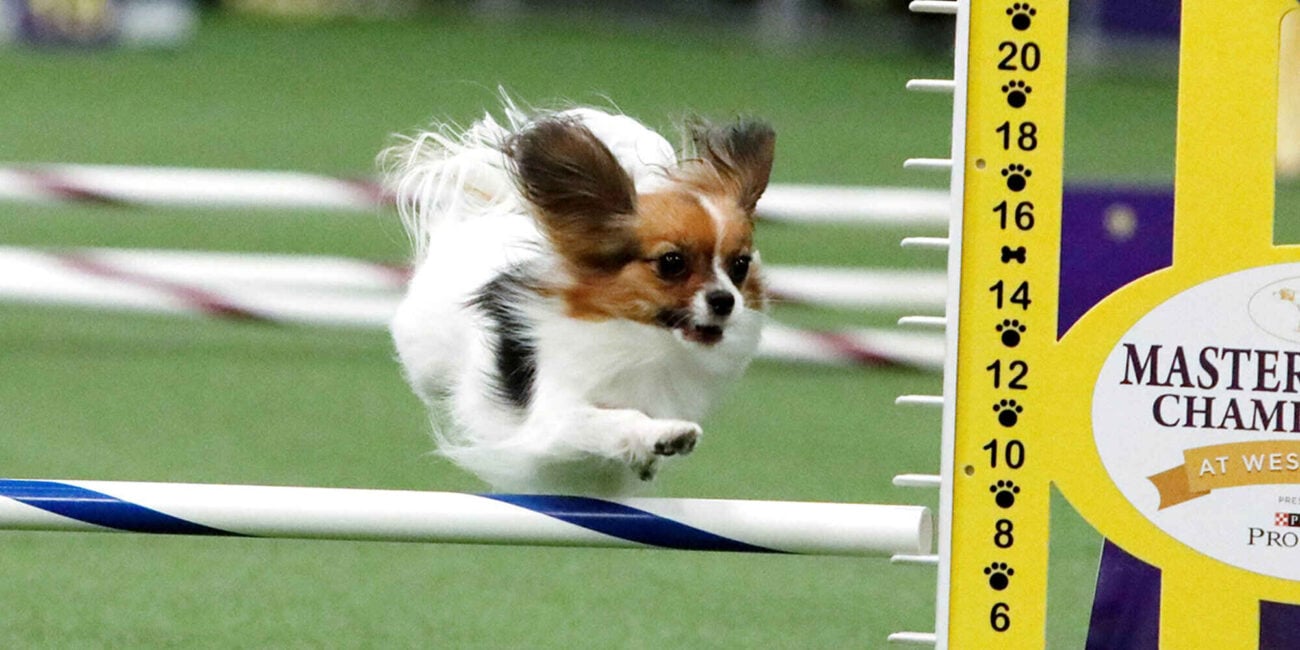 Gabby the Speedy Dog: Watch the videos causing Twitter to fall in love

In all these crazy times, what this world really needs every now and then are good ol’ adorable dog videos to make things a bit better. What’s even better than that though, is a video of a dog with so much talent they can even make Usain Bolt jealous. Speed? Strength? Skill? Gabby the Speedy Dog’s got all of that mixed in with some adorable, irresistible cuteness.

This morning on Twitter, videos resurfaced from the 2019 Westminster Kennel Club Dog Show of the then-three-year-old Gabby, an eight-inch papillon dog who stole the hearts of the crowd when she dashed through an obstacle course at lightning speed. Her talents were so insane the small dog was able to get through the course in an impressive thirty-nine point thirty-one seconds.

Want to see these adorable dog videos Twitter can’t stop obsessing over today? We’ve got you covered with that along with all the best memes & jokes about Gabby here.

This just about has to be one of the best dog videos you’ve ever laid your eyes on. Look at how excited Gabby is to start the race, and how proud she looks at the end when she knows she did the dang thing. Are you falling in love with this adorable pup yet? We sure are.

Come on, just look at how fast Gabby can run through these poles. Usain Bolt, are you watching this?

Gabby said play with your breeder don't play with me hoe!!!!!! pic.twitter.com/FAxgehwMzI

All the dogs surely must know that when Gabby steps up to the obstacle course, the competition is over by that point.

good morning to gabby only pic.twitter.com/7nYbi4xlll

Good morning to Gabby only

These videos of Gabby the Speedy Dog has us all obsessed with her. Just look at the way she’s sitting, knowing she’s the star of the show.

We’re sure Gabby’s trainer, Andrea Samuels, worked incredibly hard for this competition, but we know Gabby’s worked harder. We must admit Andrea also was probably a bit worn out keeping up with her throughout the course though.

Me tryna train my dog to beat Ms. Gabby next year: pic.twitter.com/xTNMhzGxQe

These dog videos have everybody looking at their own little ones at home and thinking: Are they capable of such talents? Maybe so, but probably still not enough to beat the adorable Gabby.

A push that was a bit too hard

Everybody couldn’t help but notice at the end of the video that Andrea Samuels pushed Gabby just a little bit too hard when congratulating her. While a few were concerned, Twitter user @cannontekstar cleared things up for everyone, tweeting: “Papillon owner here: they love to be pushed. It seems crazy, but they love it”.

“They can’t rough-house with big dogs (they’d break bones), so a human push works when they’re amped. She’s pushed again at the end & Gabby jumps right back”, they added. Phew! Good to know.

whyd she push gabby so hard at the end 💀💀 pic.twitter.com/GGP1ZIv7vm

We still can’t help being concerned

While we now know the push at the end didn’t have any ill intent, we can’t lie that it still hurts a bit to watch.

Gabby’s owner trying to keep up with her. pic.twitter.com/aFDCIO19p3

Trying to keep up

Andrea & Gabby have proven that chasing after your dog should definitely be considered an extreme work-out challenge.

All that to get closed out by this beast! 😤 pic.twitter.com/VJ5dcbjHJ9

While the internet all clearly fell in love with Gabby, it turns out that another dog named Verb, a twenty-inch border collie, actually ended up beating her to the first prize. Verb ended up finishing the obstacle course in an impressive thirty-two seconds. However, many were quick to point out that it was unfair since Gabby was a lot smaller and lighter than Verb, which made obstacles like the see-saw longer for her to accomplish.

Whichever way you choose to see it though, it doesn’t matter. Just looking at these dog videos, it’s clear both the adorable Gabby & Verb are all winners in our eyes.