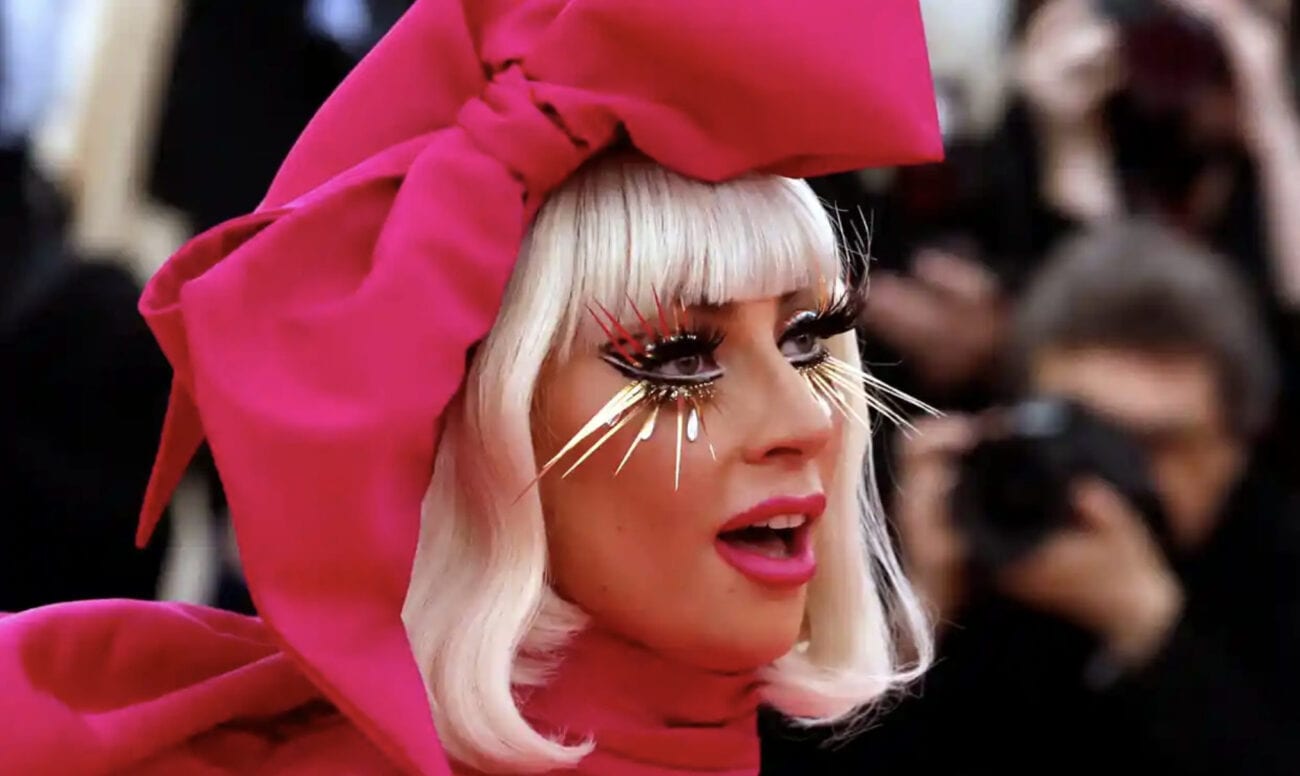 Lady Gaga fashion statements do just that . . . they make statements. There’s a reason she’s considered such an icon. Obviously, the world absolutely adores Lady Gaga because of her amazing music career: her beautiful lineup of songs are unforgettable, and we’ve been totally obsessed with her as part of the pop music scene since she released her very first song “Just Dance” in 2008.

Since then, Lady Gaga’s style, fashion, and music choices have evolved, and her fans have been totally here for it the entire way through. Lady Gaga’s acting career is also a reason for her fans to get excited. After starring in American Horror Story, it became very clear that she belongs in front of the camera for more than just music.

Then when she starred in A Star is Born in 2018, it became even easier to respect her as an actress. Aside from her music & acting paths, Lady Gaga is also considered an icon for her fashion choices. Lady Gaga fashion choices are abundantly special for their uniqueness, luxe, and appeal. She’s a total trendsetter for a reason. 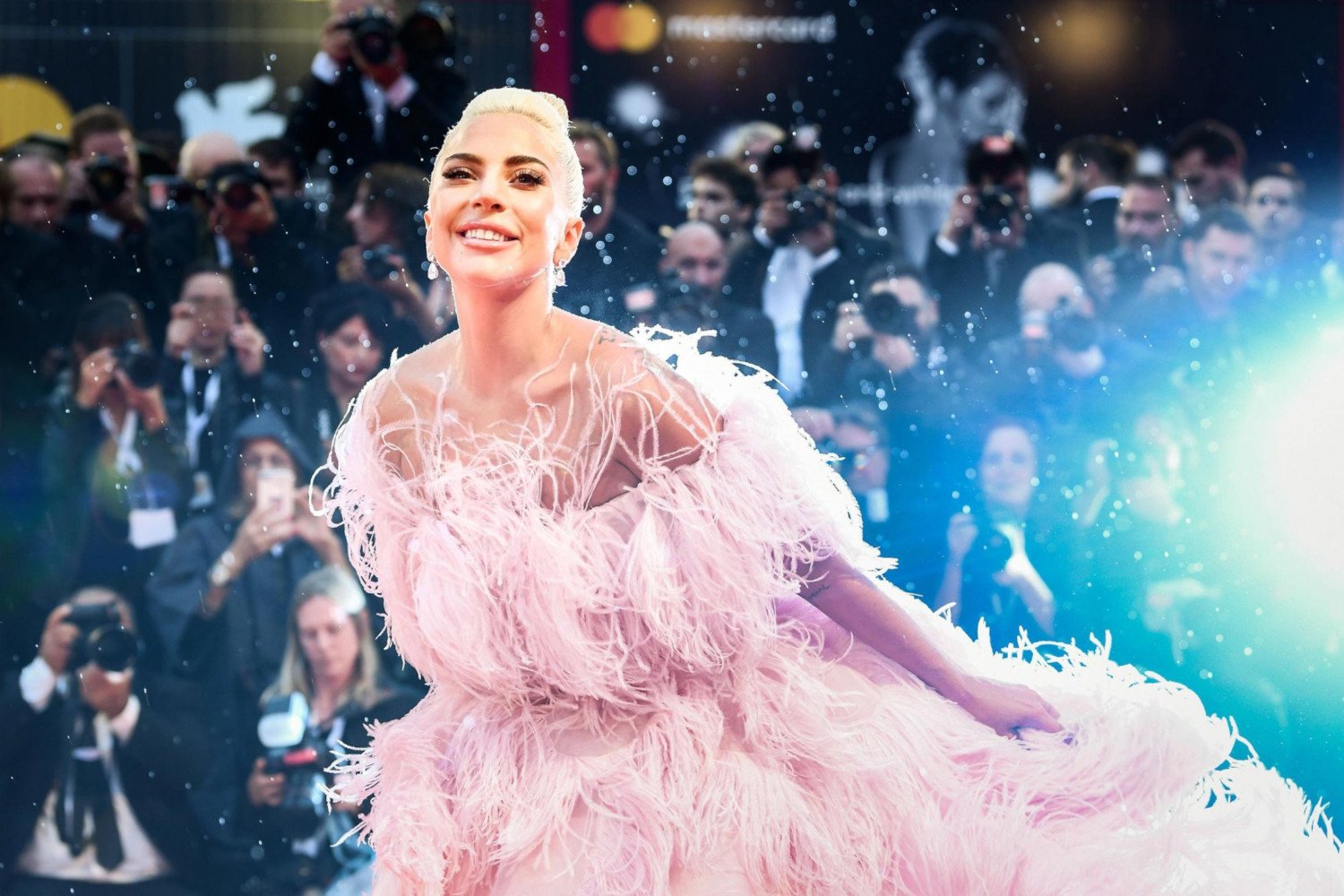 In 2018, Lady Gaga hit the red carpet for the premiere of her movie A Star is Born with Bradley Cooper. On the red carpet, she wore a pink feather Valentino gown and she looked absolutely stunning. Everything about the dress is unforgettable.

To draw more attention to the beautiful feathered gown, Lady Gaga wore her bright blonde hair tied up in a tight bun. This gorgeous dress was the perfect choice for such an epic movie premiere. Lady Gaga fashion moments completely win with this one. 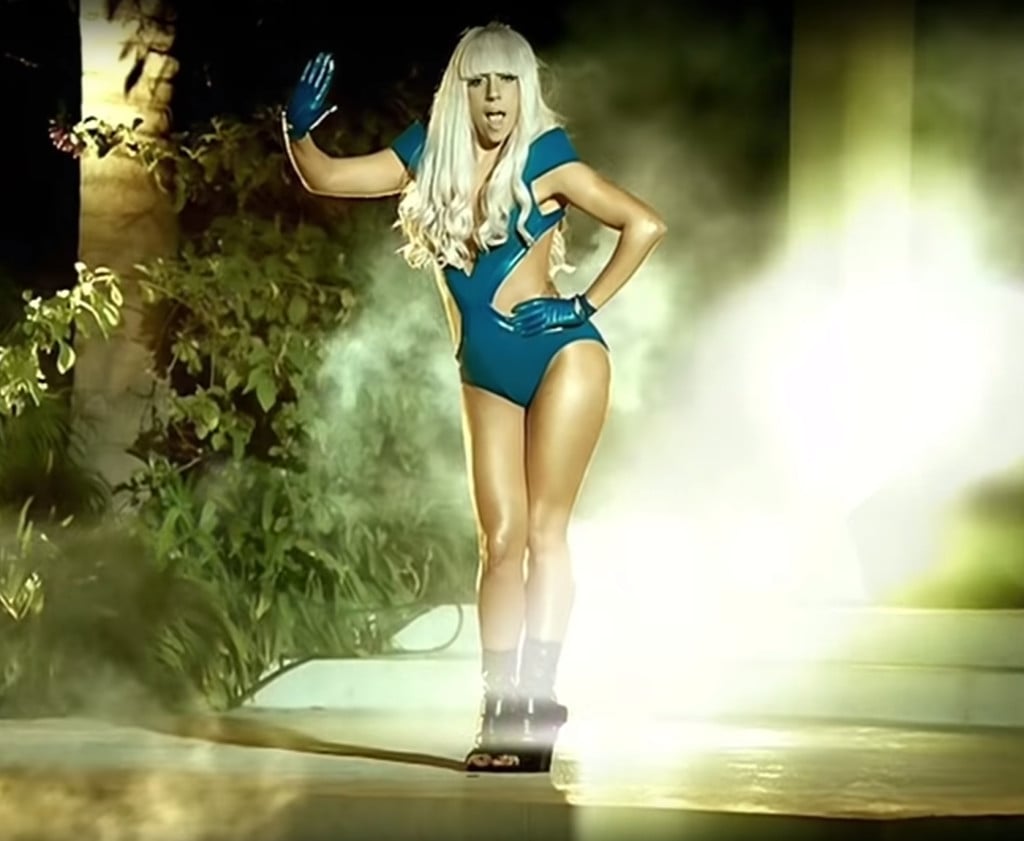 The first time fans got to know & love Lady Gaga was in her music video for “Just Dance” which premiered in 2008. The pop anthem was a game changer because as soon as it hit YouTube, it was played & replayed by millions of people for its catchiness. As it stands today, the song has over 330 million views and counting. In the music video, Lady Gaga rocks a bluish teal bodysuit during one of the scenes.

She paired the bodysuit with matching gloves and chunky black heels. Lady Gaga switched outfits up plenty of times throughout the course of the music video, but this is one of the outfits that really stood out the most. Lady Gaga fashion all began in this music video. The teal bodysuit with its massive cutouts appears both sexy & innovative. 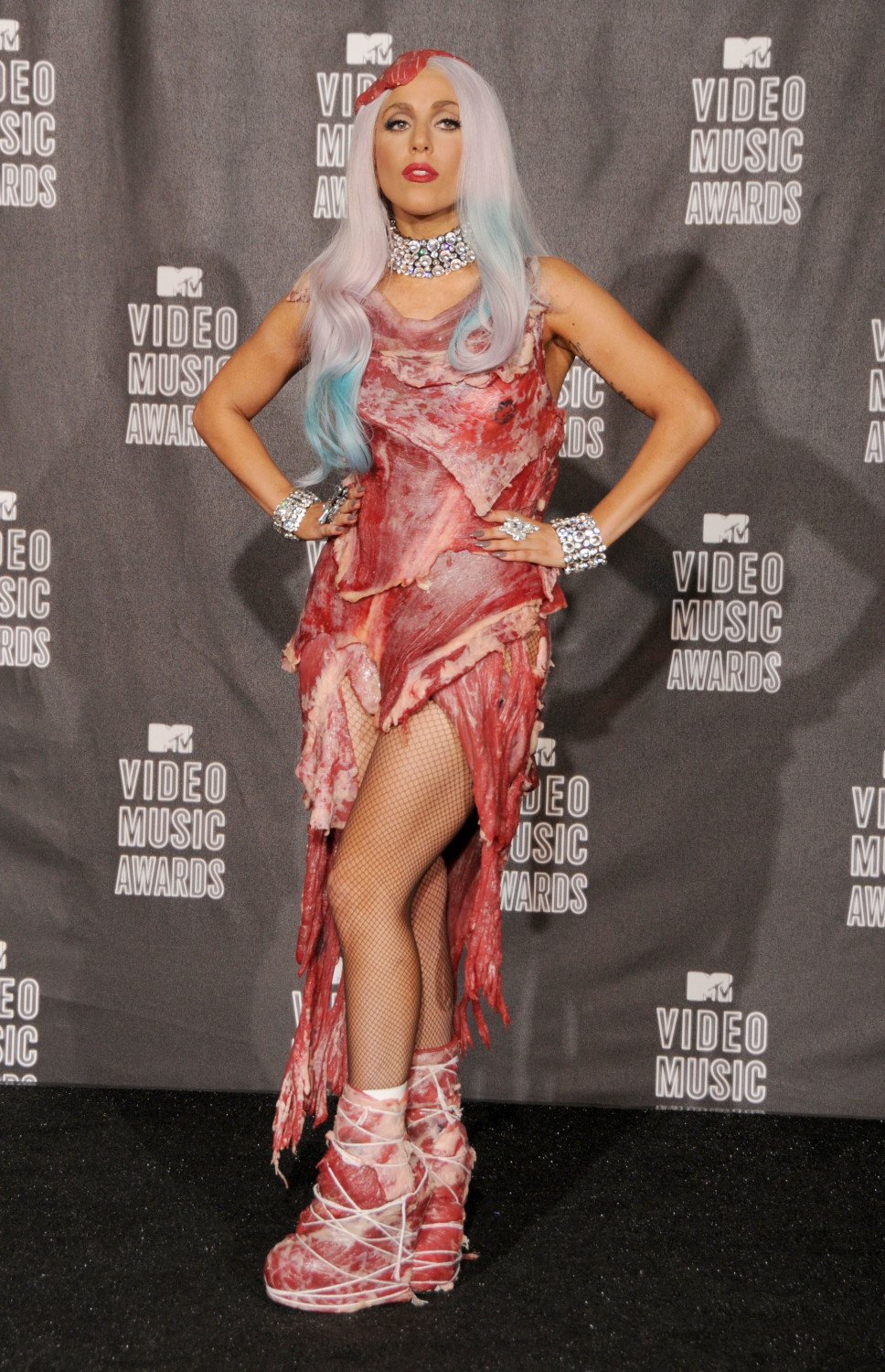 Who could ever forget the time Lady Gaga wore a meat dress to the 2010 VMAs? This is an iconic moment in pop culture history that will simply never be forgotten. Fast forward to 2019, and even Billie Eilish caught some backlash for criticizing the meat dress worn by Lady Gaga years prior.

At the time in 2010, people were very shocked by Lady Gaga‘s choice to wear a dress made out of meat but she explained she wasn’t trying to disrespect vegan or vegetarian individuals . . . She was simply trying to protest against restrictions placed on gay soldiers in the military. With this Lady Gaga fashion statement, she got her message across loud & clear. 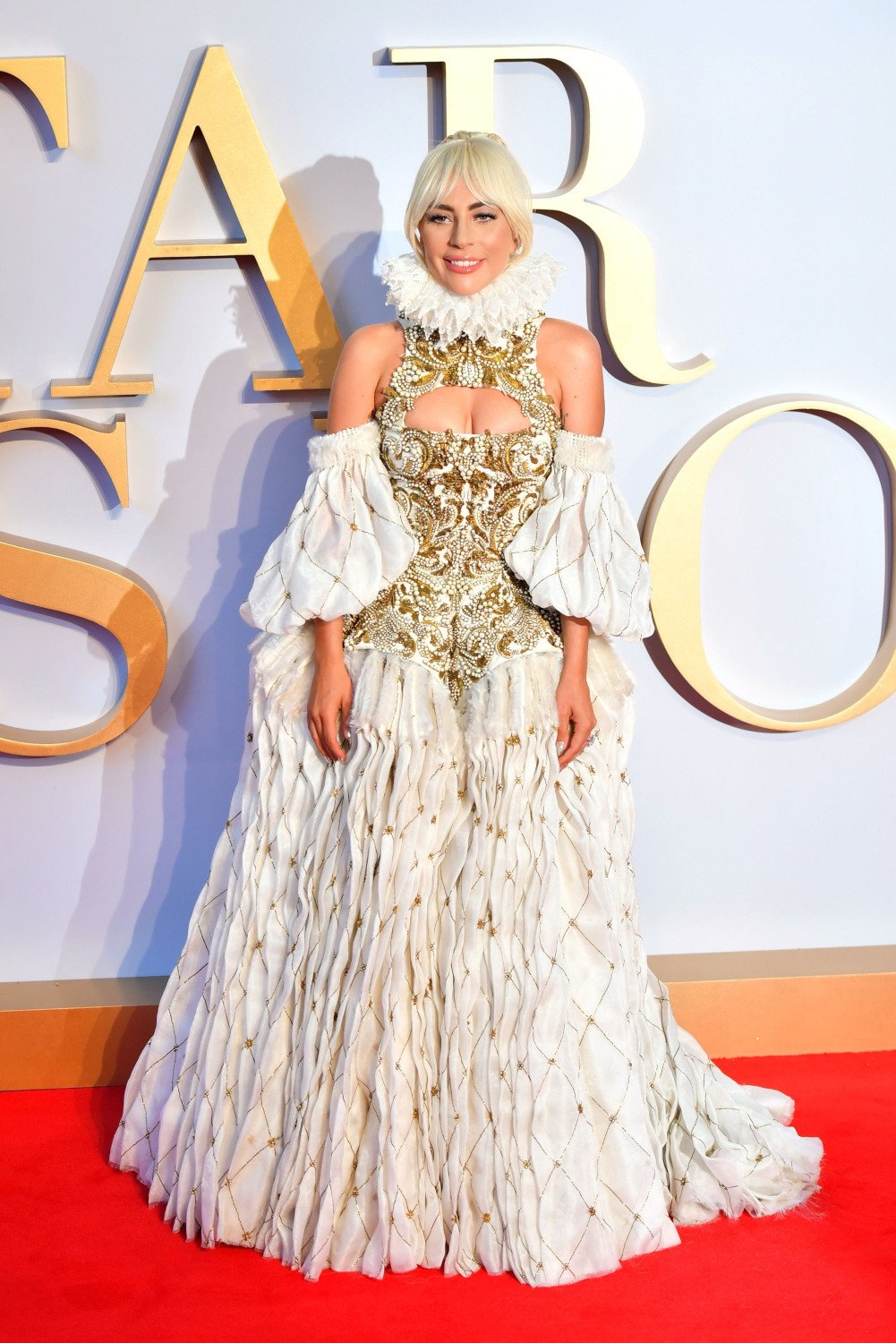 When Lady Gaga attended the UK premiere of A Star is Born, she donned an Elizabethian era inspired dress designed by none other than Alexander McQueen. The regal gown looks as if it should be in a ballroom since it has such a royal & classy look to it.

Lady Gaga totally rocked this look from top to bottom. People have been considering Lady Gaga a literal queen since she first became popular and this dress totally encompasses that. 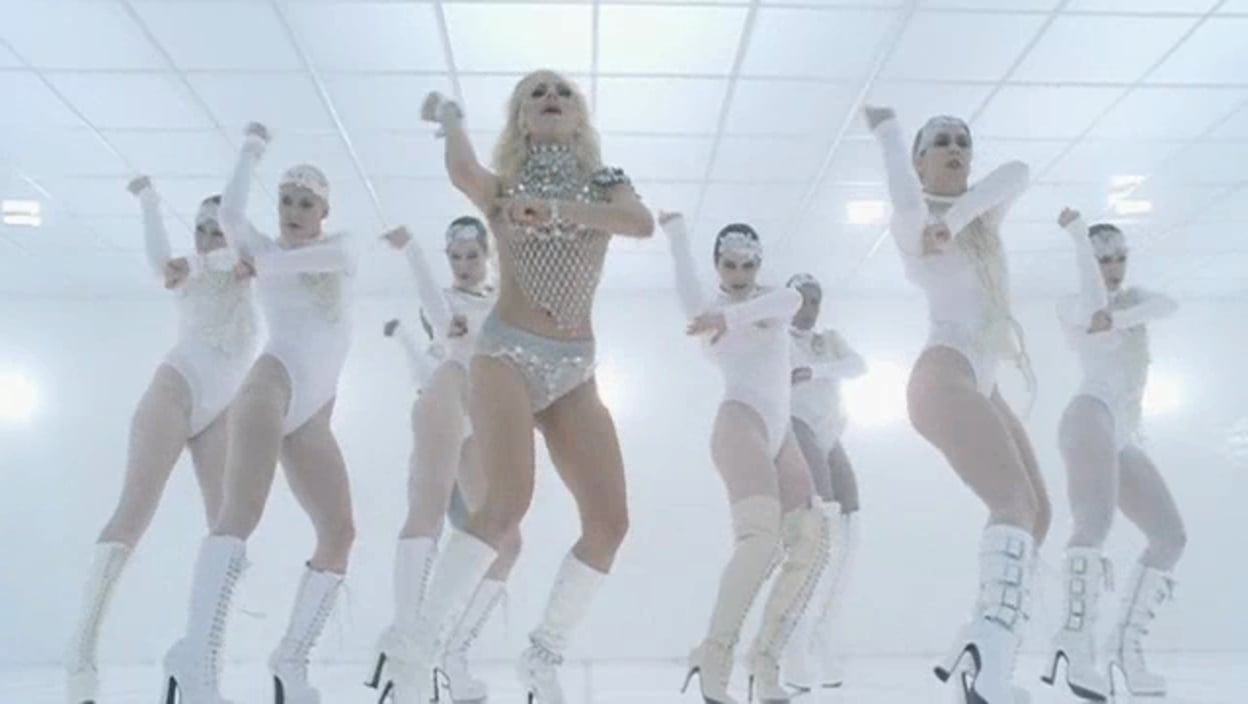 Lady Gaga changed outfits within the “Bad Romance” music video a lot but can we just focus on the crystal covered two piece she wore while shaking it out in front of her backup dancers? Everyone behind her was wearing all white but she was rocking diamonds and looking absolutely flawless while she was at it. The knee-high white boots she wore with the outfit made it so much prettier overall.