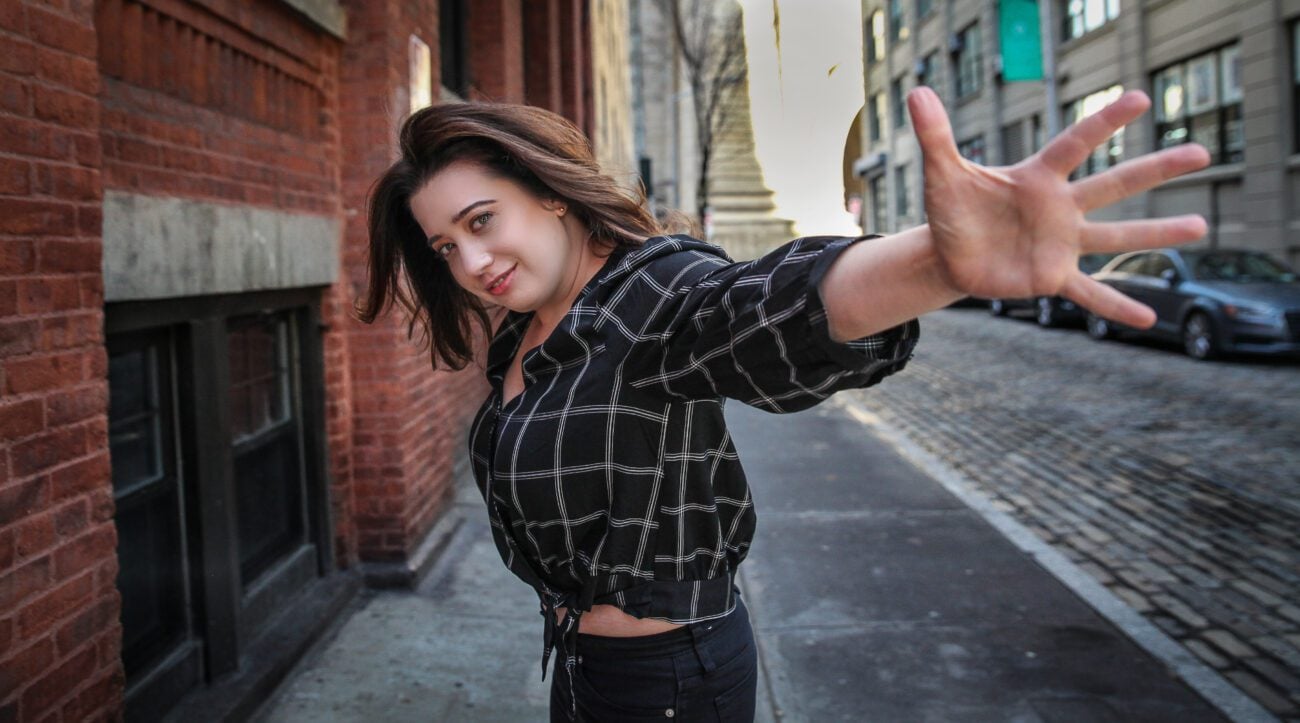 With the opening of her newest film Airway, Jessica Redish is firing on all cylinders on the festival circuit. Her short film Airway recently won Best Micro Comedy Film at the Women’s Comedy Film Festival in Atlanta and had its big screen premiere at the Dances With Films festival at the TCL Chinese Theatres.

Airway was also featured at the Calabasas Film Festival and at UCLA Extension FilmxFest where Jessica is the 2021 Ingrid Skulstad Williams Scholarship Recipient to receive her Certificate in Directing. Redish is currently attending USC’s School of Cinematic Arts to receive her MFA in Filmmaking & Screenwriting.

We were lucky enough to sit down with Redish to talk about her Hollywood journey up to this point and what she sees ahead of her with the release of Airway. 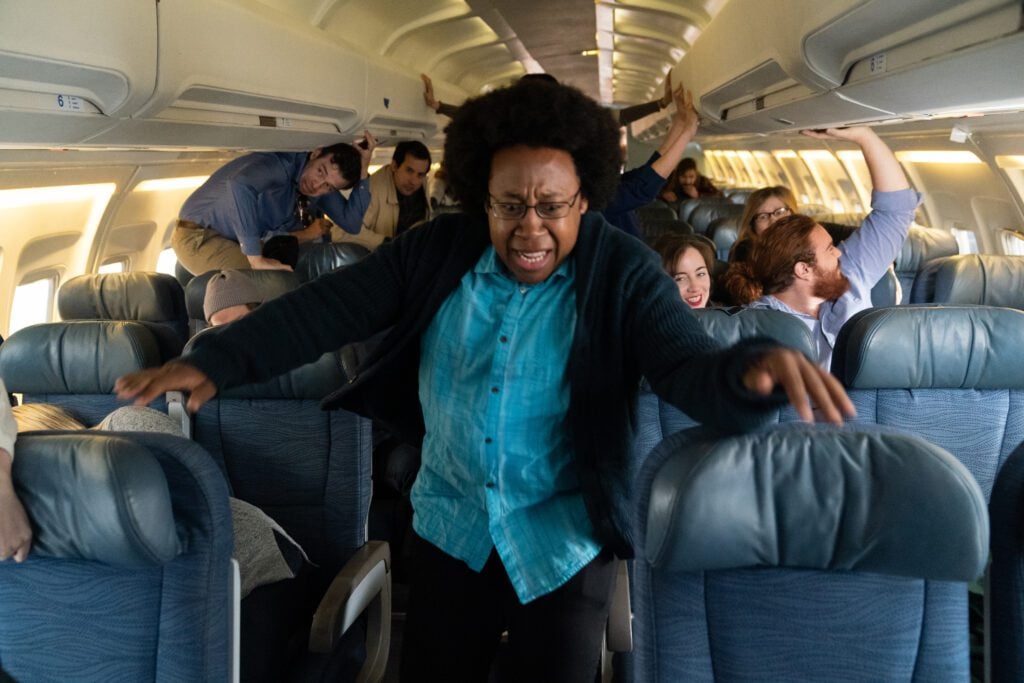 I began as a theatre person with directing and choreographing and, early on, acting. I studied at Northwestern University but even before that had fallen in love with movie musicals, especially Little Shop of Horrors and Annie. I loved the way the camera worked in tandem with the music — it was so dynamic and captivating.

The way I began studying film itself was via theatre. I ran a company dedicated to presenting and creating musical theatre outside Chicago and would host singer-songwriters on off nights. I had always had a crush on film and the way music worked in concert with it, and I asked if I could direct some of the musician’s videos.

They agreed, and on one of the shoots I put my hands on a camera on a jib and I felt very complete. I received a grant from the Richard H. Driehaus/MacArthur Foundation to study at the Rolling Stone Music Video program in New York. From there I kept getting work in film, and now I’m studying to receive my MFA in filmmaking at USC’s School of Cinematic Arts.

What was the one movie you saw that made you want to go into directing?

Little Shop of Horrors, The Godfather and The Irishman sealed the deal. Oh no, that’s three!

How was working on Airway? What did you learn from the experience?

Airway was a “trip.” Haha. I learned I can accomplish a great deal in a short amount of time. I learned good friends will show up for me, and I am blessed. I learned if I laugh at something in an edit the first time, I should leave it.  Don’t overthink the edit. I learned I can do an entire post process remotely during a pandemic.

Also, if you have an idea, don’t wait — get it in the can. We filmed it in February 2020 as a sequel to The Last Croissant and two weeks later I was at a Trader Joe’s hoarding salami sticks and rocking myself to sleep. Just make the thing — you never know what could be coming.

Tell us about The Last Croissant. What was that experience like?

The Last Croissant was a whirlwind and the results were totally unexpected. While I was used to making narrative music videos, this was my first narrative short and I was blown away by the response. Funny or Die even compared me to Scorsese!

I had thought about it for years but pre-production and the execution was very unexpected: I was choreographing a play in Washington, D.C. at the time and I was flying back and forth from LA where I was choreographing commercials. I was sitting next to a fantastic DP and gaffer, Jeff Fitzgerald, on the plane.

He had just completed some work in LA and was flying home to D.C. We started talking, I told him about my idea, he said “Let’s do it,” and an hour later we were doing pre-pro 30,000 feet in the air. I cast an actor who was in the play I was working on, who recommended funny women, whom I cast based on their reels (actors – have a good reel!).

They were incredible. Every single one of them. I was so lucky. Jeff recommended a coffee shop (shout-out to Takoma Bev Co.), and they let us film from 11pm-1am. We loaded out by 2:30am and that was it! I think it’s important not to overthink comedies — though I plan out most of my projects more than this one, I think there’s a lesson here about staying open to possibilities. 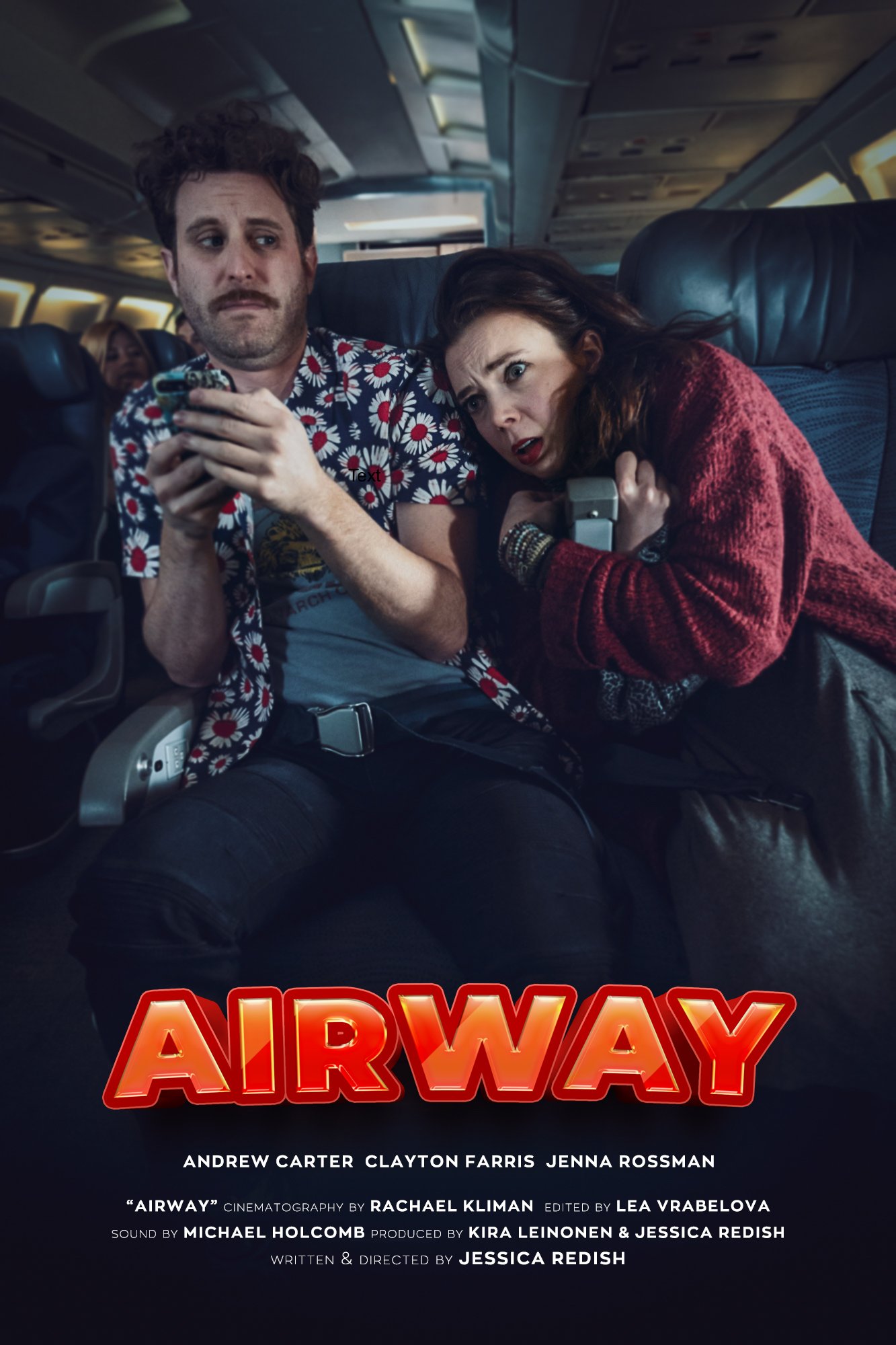 When you shoot something that you wrote, do you prefer to stick to the material as written, or do you encourage improvisation?

We stick to the script for the sake of camera sanity and continuity, but I encourage the actors to improvise a bit when doing a comedy. That happened a lot both in Airway and The Last Croissant. “Cream cheese” became “shmear” and it was just perfect. I let my actors do it in certain moments, and I bring people on who have good instincts.

The best idea wins, but I know what I want to make and keep an eye on it. If it gets a laugh, or if I laugh, and it amplifies the words I meant to say, I don’t touch it. It’s in. Too much improv leads to unwieldiness and can make continuity impossible in the edit. It’s a balance.

Tell us about your career before you became a filmmaker.

I think I was always a filmmaker but didn’t know it. My theatre work was always very visual and cinematic, and my choreography was very organic, so it lives very well on film. I threw myself into theatre because it’s what I knew and what was around me growing up in Chicago. Working in Chicago theatre instilled in me a sense of discipline and a sense of teamwork.

I moved to New York and choreographed Off-Broadway and around the country, winning a Helen Hayes Award for Outstanding Choreography for Silence! The Musical, a parody of The Silence of The Lambs. All the while, I was directing and choreographing music videos. When I moved to LA my first job was choreographing The Smashing Pumpkins’ International Tour.

I had met Billy Corgan at his tea shop in the same town outside Chicago where I was running a theatre dedicated to musicals. We collaborated there and then he brought me on to choreograph four of the songs in the tour. It was a total trip. I was always working in theatre but the momentum I have had in film, starting with my early music videos and then The Last Croissant has guided me to the work I’m doing today.

I can choreograph to almost any music — it inspires a dance in me, almost no matter what it is. I’m not someone who makes a playlist for a film shoot, because my brain will get distracted — I’ll start making a dance in my head.

I’m usually on a walk or I see something weird in my life and I have to write about it, mainly to make sense of it. Sometimes my subconscious is working and I didn’t know what it was until I saw it and made the thing. I got a lot of good ideas while cleaning my kitchen during quarantine. Something about the meditative nature of it really helped bring out some stories that turned into successful projects for me.

What tips do you have for new directors?

Just make the thing. Get behind a camera, start telling stories, learn how the camera frames and lenses work. Use the medium to tell us something new, or anything at all. Make your film. 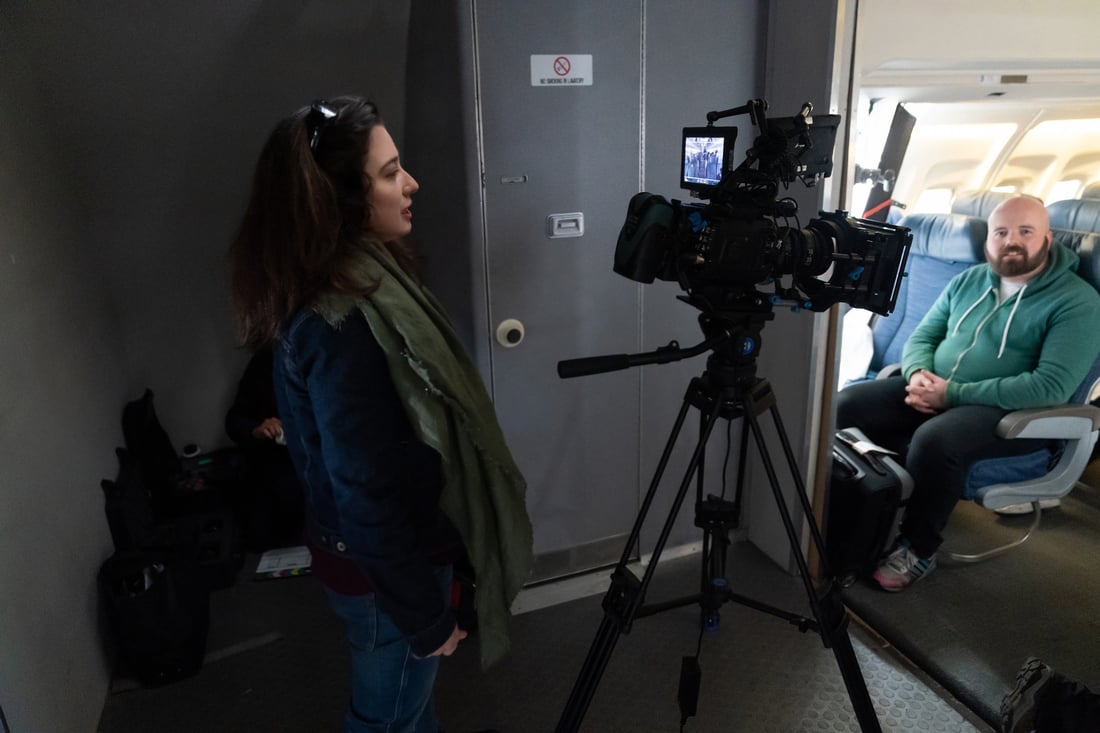 What part of the filmmaking process do you geek out about the most?

Collaboration is the best. There’s nothing like it. Having your idea synthesized and improved upon is so thrilling. Creating art is a privilege and a pleasure, and it becomes infinitely more fulfilling when other people help you see it through.

I also just love hearing my lines read aloud by my actors and seeing the choices they make inspired just by the page — I feel heard!  I feel heard! When actors and audiences say to me “That resonates with me,” I don’t feel like such an oddball. Express what’s in you. It will land with someone. I don’t intend to write comedies, I just write true to my experience. And people seem to like it. I’m ok with that.

I’m studying at USC now, and I’m preparing a short musical film Exit: Pursued by a Bear, inspired by a bear that was in my neighborhood for six months.

What has been your biggest failure? What did that experience teach you?

Early in my career, I didn’t have the will to assert myself and advocate for myself. There was a project I was on in which I stifled my own voice. I now do the opposite. The experience also taught me to stay away from toxic environments. Just say no to those projects. They don’t get better.

Artistically, The Last Croissant. Personally, having a great family and great friends. 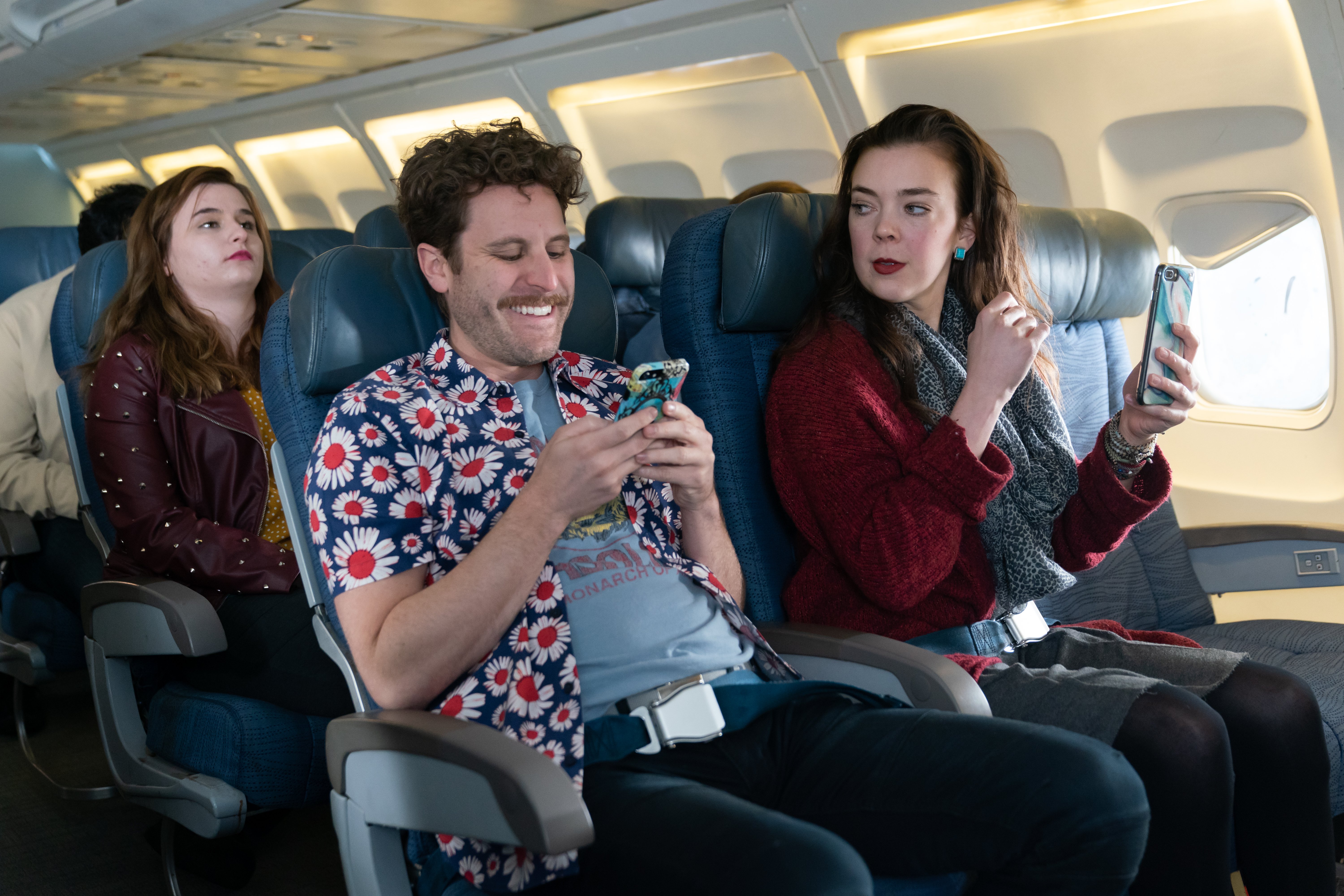 What’s your mission as a director? Name the most important thing you want viewers to experience when watching your projects.

I want to make female-driven comedies. I really want to create a female Hangover, but I want to do my Hangover and then my Joker, like Todd Phillips. Before film school I tended to write films about women dealing with the absurdity of their station in a world that says there’s only one way to be; they were very concept-driven and now every day my brain is changing and my work is growing.

Musical theatre is creeping back in and I’m starting to create musical movies, which was my initial introduction to film. My mind is shifting at school, daily. I’m focusing on character more, and their wants and needs.

To be earnest, I don’t often think about the audience; I think about what needs to be said and how I’m going to say it so people understand. I’ve learned that enough people are interested in what I have to say and trust I can say something that resonates.

I do like hearing people laugh. It makes my day. Joan Rivers said, “If you’ve made someone laugh, you’ve given them a small vacation.” I love that. Things can be so hard, and laughter is truly great medicine. I want to make comedies with a point.

I’m going to finish my degree and make a feature, then another one. I’d also like to direct episodic comedies for television. Until then, I have to figure out what I’m doing tomorrow.

What artists should be on our radar?

The Godfather. It hit me because it felt like I learned about my own life, and it felt like watching a great piece of theatre. We are all Michael Corleone; it’s impossible to escape our genes. It brought me to this realization instead of telling me what I should think. I thought, “I need to do that.”

What else do you think Jessica Redish has up her sleeve after pulling off something such as Airway? Let us know in the comments!