Netflix’s ‘The Rain’: The good, the bad, and the muddy

Netflix’s The Rain aired in early May and now that we’ve had time to sit back, binge watch it, and let the post-apocalyptic drama sink in, it’s time to ask whether it’s any good.

There’s a lot to like about The Rain when it comes to its depiction of environmental catastrophe. Set in Denmark six years after a virus wipes out human life in northern Europe, two siblings – Simone and Rasmus – emerge from their bunker to try to find their missing father. They team up with a group of odd-ball survivors to trek across the dead zone towards “the wall” to escape. The tension behind their story and the secrets of the virus are amazing. There were more than a few times that we were on the edge of our seats. Unfortunately, the writers’ approach to their female characters is somewhat mixed. Today we’re going to cover what they got right (and wrong) about the women in the show.

One character who deserves a shout out is Simone Andersen, played by Alba August (Becoming Astrid). The eldest of the Andersen siblings and the daughter of the scientist responsible for the virus, Simone lives an uneventful life until disaster strikes, after which she and her brother Rasmus (Lucas Lynggaard Tønnesen) are trapped in a bunker for six years. Thrust into adulthood before she’s ready, Simone grows as a character over the course of the show. Neither weak-willed nor the stereotypical strong woman trope that infested TV during the 90s, Simone is logical and optimistic while struggling with severe anxiety produced by the disaster. Despite the hopelessness of the situation, she refuses to be beaten down by it, and it makes her an interesting lead because her emotional responses are so relatable. We all want to do good, but sometimes we suck.

Another excellent character is the religiously devout Lea, played by Jessica Dinnage (The Guilty). The daughter of strict catholic parents, Lea struggles to balance her faith versus her desire for a normal teenage life prior to the outbreak of the virus. After disobeying her mother and attending a party, she is drugged and assaulted, after which the video of her assault is shared on social media. The fear of having your trauma broadcast to the world is a nascent one the audience can relate to, and the way in which Lea’s personal crisis is handled is done from a position of genuine care. Instead of exploiting her pain for shock value, we see how she feels about the situation and how she works past it once the apocalypse strikes. Her story is about learning to cast off these ideas that society and her religion have told her about herself, and in doing so her story is cathartic.

However, while Simone and Lea are given good treatment by the text, the rest of the women in the show are lacking. The Rain suffers from a deluge of dead women, as every mother figure within the series either starts off dead before the first episode or dies along the way. Simone and Rasmus’s mother dies when the virus strikes, choking to death on the fluid in her lungs. Lea’s birth mother dies when she tries to collect her after her assault, also killed by the virus. Years later, Lea’s second mother dies when she is sacrificed to a group of cannibals so Lea won’t be eaten. Another female character named Beatrice (Angela Bundalovic) is either lying about who her mother was or left her to die by herself. And it is with Beatrice specifically – the beautiful, melancholic love interest of Rasmus – that The Rain’s ability to handle its female characters comes to a grinding halt. We aren’t happy with where her story ended up.

To give you some backstory, when the apocalypse struck, Beatrice joined forces with Jean and Lea to try to survive. After their group stumbled across the deserting soldier Martin – played by Mikkel Boe Følsgaard – she traded sex for protection even though it was not prompted from her. (Martin seemed to have been overwhelmingly uninterested with her until she crawled into his bed.)

Over the next six years, the two of them develop a relationship where sex is used as currency. Beatrice is miserable while Martin is clueless that she hates him. When the Andersen siblings arrive, Beatrice falls in love with Rasmus. It’s clear that she prefers him to Martin, but when Martin shows an interest in Simone she becomes inexplicably jealous. Did The Rain want to create a false dichotomy between Simone and Beatrice because they were both young and beautiful? If so, it’s an age old trope where women are pitted against each other for a singular man, and to be honest it’s pretty boring. Been there, done that.

However, the most egregious element of the show is having Beatrice die immediately after she helps Rasmus lose his virginity. By boiling down her role to nothing more than a sexual object – and having her death focus on Rasmus’s pain instead of Beatrice’s internality leading up to the event – the show says something terribly regressive about its female characters. Good, virtuous women like Simone (who puts her brother’s needs before her own) and Lea (a religious devotee) are saved by the narrative, while a sexually active woman is co-signed to death for daring to choose her own romantic partners.

If The Rain is renewed for a second season, we hope they’ll avoid this trope like the plague (pun intended). The ugly politics just muddy up the narrative. 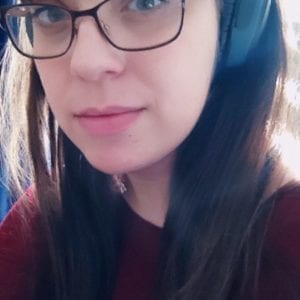 Shianne Edelmayer is a freelancer writer and illustrator based in BC, Canada. When she’s not working as a content provider for social media platforms – or appearing as a co-host on the podcast Metamashina, where she talks about genre fiction from the feminine gaze – you can find her writing very long novels, binging Netflix series or talking too much Star Wars. She also tweets under the alias @Ohtze_O on Twitter.