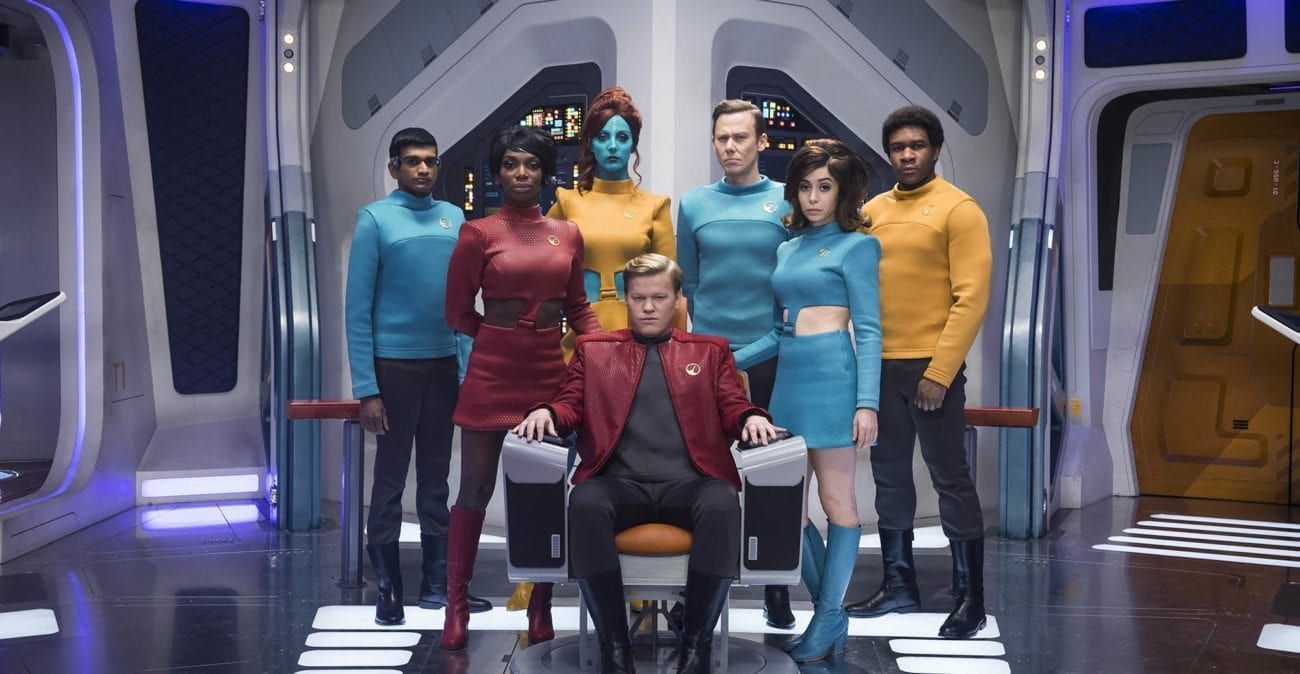 We’re attempting to review each ep without spoilers but if you want to go in completely fresh then walk away!

Logline: Adventure awaits on board the star-searching U.S.S. Callister.

Verdict: Aw, geez. It’s difficult for us not to get into this one without spoiling the whole game. “USS Callister” is one of the knockout hits this season, a real plunge into the depths of simulated worlds of toxic nerd fandom. The episode doesn’t just take Star Trek, it takes original Star Trek and fits it into an existential horror mould: a breath of originality and unexpected genre-mixing for a distinct treat of a Black Mirror episode.

We did not expect it to go to certain places – but it does. Jesse Plemons (The Master) basically acts out a William Shatner fantasy, and he nails the voice eerily well. The way he’s able to dive between two polar opposite personas is genuinely scary, which is probably the point. Cristin Milioti (The Wolf of Wall Street) delivers a sense of energy, determination, and stubbornness, a triumphant performance as one of the best female heroes television has had all year.

The ideas played around with this episode are seriously stomach-churning stuff, weaved together into a retro sci-fi aesthetic equal parts gorgeous & garish. “USS Callister” plays on your sympathies too, shifting into a whole new set of circumstances after the first act. Brooker cleverly keeps you in tune with the heroes in this story, making your bewilderment and desperation align perfectly with theirs.

There’s a weaponization of retro Star Trek, especially its sexism and political incorrectness which aren’t brushed aside or used for window dressing; rather, they’re explored as part of a bigger philosophical drama. The merger of a mature exploration of the effects of toxic fan culture alongside brutal existential topics makes for a hearty theme mish-mash. The pace meanwhile allows space to breathe and digest the points it makes, all the while keeping you at the center of a bombardment of horrors.

Toby Haynes uses some of his sci-fi background (on the likes of Doctor Who) to ground the conceptual stuff, with impressive photography work straight out of the recent Star Trek films and filled with a sense of relentless pace & adventure. “USS Callister” doesn’t let up its pacing, like a toddler on a fizzy drink overdose – though with none of the health concerns. Jimmi Simpson’s dual role is a fascinating juxtaposition, and Michaela Coel (Monsters: Dark Continent) is an absolute delight as always.

The final act might need a little explication and some character motivation makes no sense at all, but “USS Callister” turns out to be a genuine thrill ride, sweaty palms and all. This is part of a pair of stand-out episodes of the season, one of Black Mirror’s all-time greats, confronting its horrors but also delighting in the adventure that retro sci-fi can hold.