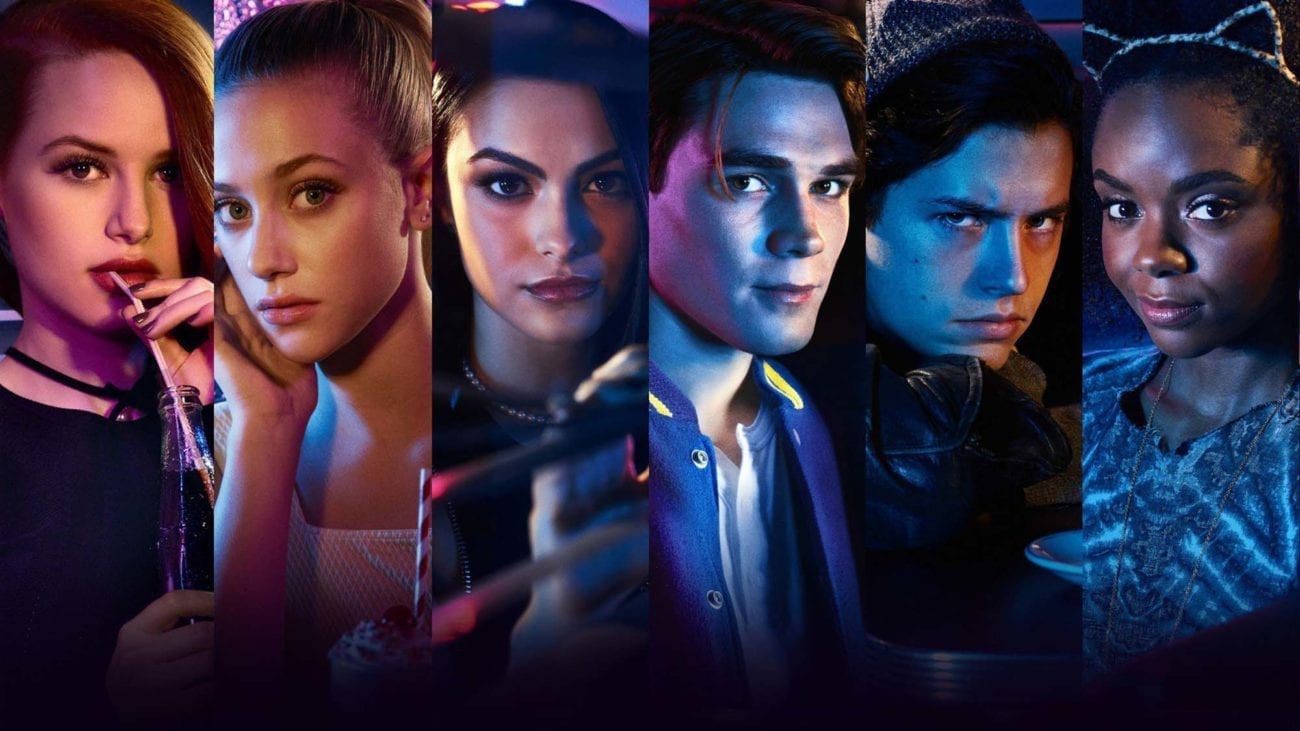 Who is the “real Chic” on ‘Riverdale’? Betty’s bro could be anyone!

As we stumble through the treacherous, twisted narrative of the final episodes of Riverdale’s second season, there are a number of mysteries keeping fans awake at night. But there’s one particular question we’re all asking: Who is the real Chic? Played by Hart Denton, the character showed up midway through S2 of the series claiming to be the half brother of Betty Cooper (Lili Reinhart) and long lost son of Alice (Mädchen Amick). Judging from all the sinister grins, murder, and shady threats he’s been throwing around the ‘dale lately, he’s most definitely not who he says he is and some fans think they may have finally figured out his true identity. Or near enough anyway. Personally, we have our own screwball ideas about who he could be but we’ll circle back to that in a moment.

First, the leading fan theory revolves around Chic being the love child of Alice and hot biker Daddy F.P. Jones (Skeet Ulrich). At the end of the last episode, we were given a glimpse of the lit chemistry between the two ex-lovers as Alice sashayed her way into his trailer with a knowing smirk and F.P. removed his gum for the lady like the hot-ass gentleman he is. They totally hit the bone zone. Why is that important now? Well, it isn’t. Except if Chic is F.P.’s son (which the character has already denied but he isn’t exactly trustworthy), it’ll certainly tarnish their tawdry dalliances and also make Betty and Jughead’s (Cole Sprouse) relationship feel pretty weird. Can a couple share a half brother and screwing parents and survive the whole ordeal? Probably not. Unless dark Betty returns and goes “full dark no stars” again to “fix” the situation.

The other great theory on Reddit suggests the dude who came looking for Chic – the one that he murdered and the Cooper Jones clan teamed up to cover up – is Betty’s actual half brother. Which could suggest poor old Alice & Betty had a hand in burying their own flesh and blood. Since K.J. Apa (The Cul De Sac) suggested this week the S2 finale will be “tragic”, we’re inclined to believe this dark theory has the potential to come true. “It’s a tragedy, really, what happens. I think the last episode, if I were to describe it in one way, it would be tragic — for one person in particular in the show, but for everyone, ultimately.” These are all valid ideas, but here at Film Daily we have our own (ludicrous) theories about who Chic might actually be.

The Chilling Adventures of Sabrina exists in the same Roberto Aguirre-Sacasa twisted Archie comics universe and is coming to Netflix real soon. Since the teenage witch would probably have zero problems just cracking a spell open on herself to transform into a malevolent camboy and infiltrate the Cooper household, we’re inclined to believe she could be Chic. Of course we have no solid reason as to why Sabrina would do this other than for shits and giggles. But we’d also utterly die if the S2 finale involved Chic pointing a finger at himself and transforming into Sabrina in a fit of sparkles before declaring, “The witching hour is upon us, bitches”. Scene. Roll credits.

Just picture it: Jughead & Betty investigate who Chic actually is and by the finale pull at his face to reveal (cue dramatic synths) he was wearing a mask the whole time! It’s actually some random dude who lives in an abandoned ghost train on the South Side trying to get his grubby mitts on that tasty Cooper-Blossom fortune. And he would have gotten away with it too if it weren’t for those pesky kids! The Scooby Gang show up at Pop’s Diner, everyone eats burgers, Cheryl makes out with Velma, Scooby winks at the camera, Shaggy sparks up a phat one, and that’s a wrap. Another mystery solved!

Cole’s equally dashing twin brother has already been unequivocally ruled out from ever enjoying a cameo on Riverdale. But that’s also exactly the sort of thing tricksters like Cole & Dylan Sprouse would tell people just to throw them off the scent! Imagine, if you will, a closing scene in which Chic fakes his own death and breaks the fourth wall to walk off the set and straight into a makeup trailer where an artist scrubs a thick swab over his face to reveal (gasp!) it’s Cole’s real-life brother Dylan! We have no idea why. We’d just like for that to happen. Not everything has to make sense, guys and girls. Jeez!

It seemed a little too easy for Miss Grundy (Sarah Habel) to disappear in a pair of Lolita shades in S1, only to reappear just to be murdered in S2. We also won’t ever forget her criminal boom boom sessions with young Archie in the first season. Who knows, maybe his virile teenage sperm and her overly-enthusiastic ovaries got pally and made a baby. And that baby grew up, built a time machine, and returned to the year he was born to reap revenge on the town that basically made and rejected him. That baby is Chic and (for extra twist value) let’s say he’s also The Black Hood because then it makes the murder of Miss Grundy all the more grisly and a little less throwaway. Plus, why else would they choose the theme from Rosemary’s Baby to play over this scene? Chic is devil spawn and he’s making that town pay, honey. We’ve figured it out, people! It’s so totally this. Probably.

The resulting hallucination of a Cooper household gas link

Carbon monoxide leaks are not to be taken lightly, folks! Sometimes they can also cause a lot more symptoms than just headaches, nausea, and dizziness. They can also cause hallucinations. Notice how Chic is rarely seen interacting with anyone outside of the Cooper household? Maybe that’s because there’s a deadly carbon monoxide leak in the house causing everyone to hallucinate his existence. Hopefully if both Alice & Betty keep shacking up in the Jones family trailer, their toxicity will decline and they’ll soon realize Chic was little more than a figment of their poisoned delirium. In the meantime, the plotline will likely remind America about the dangers of carbon monoxide poisoning, making this imaginary plotline a potentially classic Archie “after school special” for everyone to learn great lessons from. Case closed.

Just where in the great gollygoshdarn world of Riverdale is Jughead’s little sister? Her and her mom (who we absolutely hope will be played by Neve Campbell, thus reuniting the actor with her Scream co-star Ulrich) are supposed to turn up on the show soon. So who knows – maybe Jelly Bean is actually Chic? Why not? Let’s roll with that. It’s Riverdale, where anything is possible.