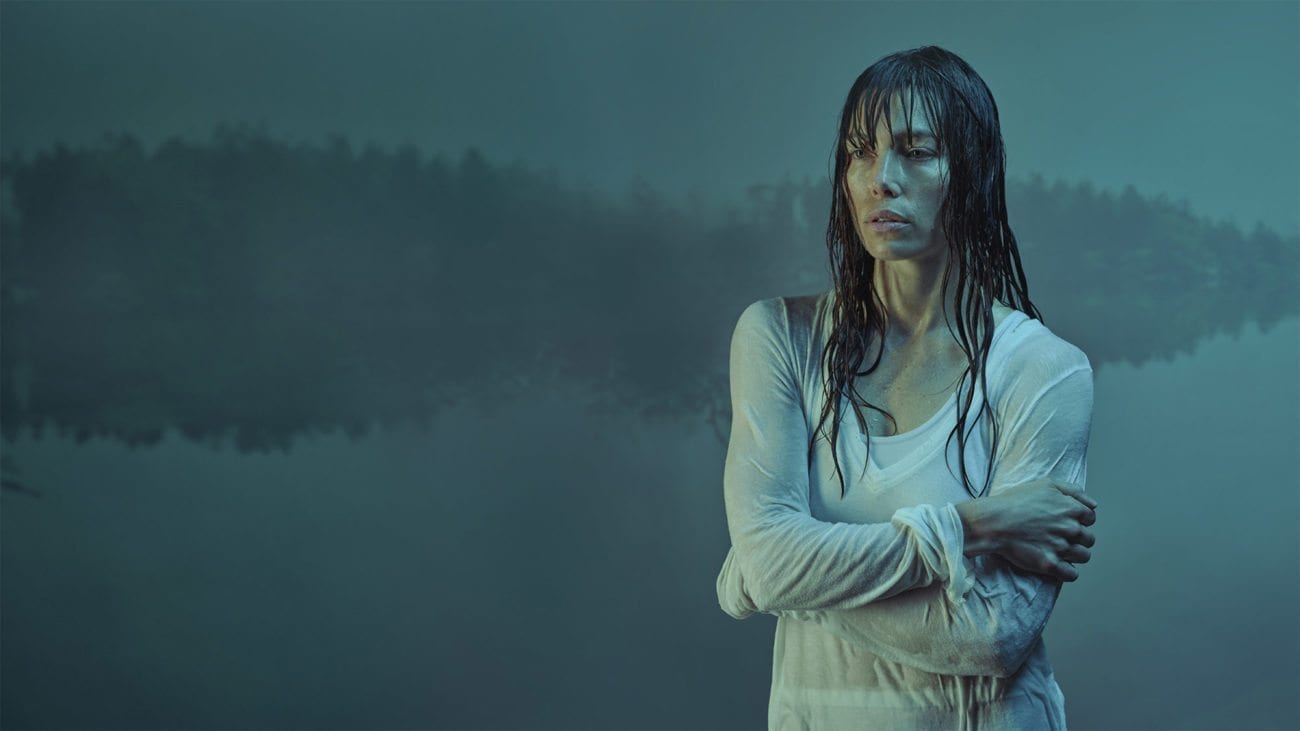 Jessica Biel: The most shocking moments in ‘The Sinner’

S3 of USA Network’s The Sinner will be premiering this fall. S1 was a big hit for the network, which became the focus of many a thinkpiece and bingewatching session – now also available to stream on Netflix. S2 dropped last year but was missing the magnetism of Jessica Biel playing Cora Tannetti. Regardless, it was a watchable affair centering on a child who murders his parents. (We never said either season was uplifting!) 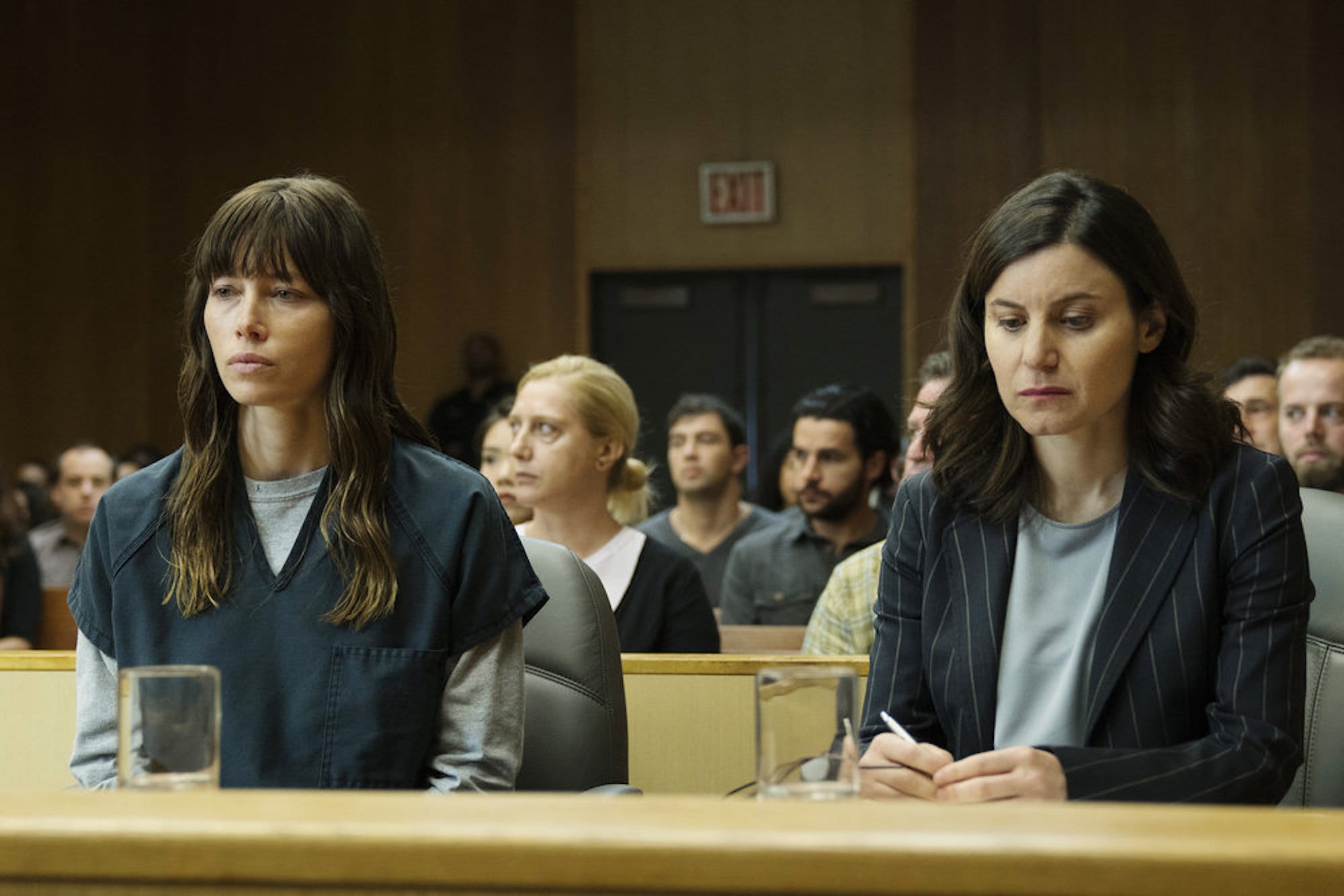 All we really know so far about S3 is that Bill Pullman will be back as Detective Harry Ambrose and Matt Boomer will be playing the lead.

As Ambrose realizes there’s nothing ordinary about the boy or where he came from, the investigation pulls him into the hidden darkness of his hometown. He’s pitted against those who’ll stop at nothing to protect its secrets – and a mysterious woman who proves to be a complicated, enigmatic piece to this haunting puzzle.

This third chapter can’t come soon enough. In an era of television increasingly defined by violence & trauma, The Sinner is a murder mystery that stands above the rest. To show you why, here’s a rundown of eight moments from the first season that really creeped us out.

In one of the show’s many flashbacks, Cora (Jessica Biel) and her husband Mason (Christopher Abbott) are about to have sex. When he suddenly goes down to initiate a bit of oral, she freaks out and squeezes his head between her thighs. A hint of deep-rooted sexual anxiety bubbling to the surface, or just not in the mood for it? Either way, it gives a whole new meaning to “getting head”.

The horrific abuse and trauma of Cora’s early life is revealed to us slowly, through fragments of nightmares or visions. In the third episode, she dreams of a bell ringing at a bar and a blonde woman who whispers “give her another hit, it’ll loosen her up” into a man’s ear. A topless girl lies on the floor. Suddenly, a shoe comes down on her chest, and her sternum caves in with a sickening crunch. Not surprisingly, Cora wakes up screaming.

Ambrose discovers a shallow grave in the woods by an abandoned school bus, leading to the unearthing of a skeleton wrapped in a blood-stained blanket. At this point, there’s literally no telling where this mystery could go. 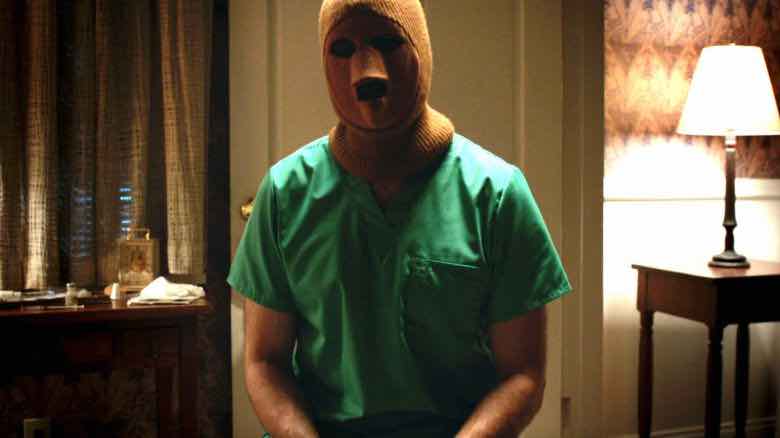 The brown wallpaper from Cora’s recurring visions comes into focus before our eyes, and it’s clear we’re seeing something (but we’re not sure what yet) from her perspective. The camera pans and we see the bedroom the wallpaper decorates. A man enters and takes a seat. He’s wearing a nurse’s tunic and a featureless knitted mask (think halfway between a balaclava and a plague doctor). “How are you feeling today, Cora?” he asks. It’s like the Scrubs crossover episode nobody asked for.

In another terrifying recollection from Cora’s jail cell (this first episode is really fucked up), we see a very young Cora with her mother (Enid Graham). She introduces her to a brand new baby sister, Phoebe – but something is horribly wrong. The infant’s skin is mottled with hues of blue and purple and she’s clearly very sick.

“When you were a baby inside of me, you took up all my strength,” Cora is told. “Enough for three children. So when Phoebe came, there wasn’t any left for her. That’s why she’s so sick. But I prayed – in that hospital I prayed like I never prayed before, and it worked, see?”

While it’s still not entirely clear how Cora’s childhood has contributed to her damaged psyche, it should come with little surprise that incest will soon enter the picture. In a flashback, we see that her sister Phoebe (Nadia Alexander) is the instigator of the abuse. Because of her continued illness, Phoebe is bedridden and lives vicariously through Cora’s experiences.

So when Cora returns home after her first sexual encounter, her sister insists that she demonstrates it all. It’s a heart-wrenching scene and one that highlights how seriously The Sinner intends to treat incest as a form of abuse – as opposed to a show like Game of Thrones in which it’s merely treated as a punchline by the other characters.

It all begins with a morning just like any other – Cora & Mason clean their kitchen, fold laundry, and take their toddler son Laine to the beach. While peeling fruit with a knife, Cora notices a couple getting hot and heavy nearby and something is triggered within her. “Stop it, get off her,” she shouts. Knife in hand, she runs over to their blanket and repeatedly stabs the man in the neck and all over his torso.

The beach is awash with screams of terror. In the immediate aftermath, soaked in blood, she stands stiff and spellbound. Mason wrestles her to the sand and she releases her grip on the blade. If you’ve ever witnessed genuine violence – the kind that’s as clumsy as it is appalling – you’ll appreciate how effectively this moment has been executed. It’s a bold, bloody way to kick off a show.