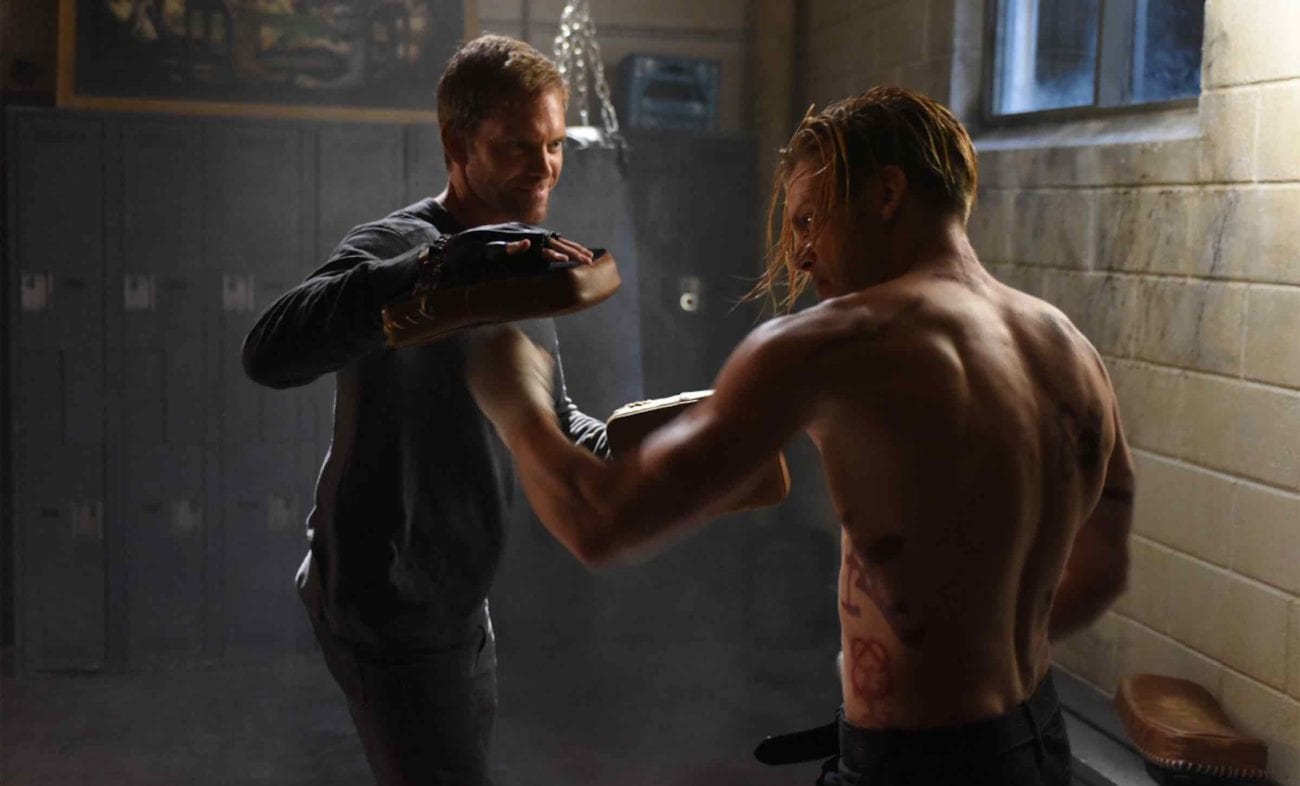 Even more shirtless Shadowhunters?! It’s about to get even hotter up in here at Film Daily. We didn’t think it was fair to have just one celebration of perfectly toned people, especially if they’re in the cast of Shadowhunters.

It’s not very hard to see why the Shadowfam loves Shadowhunters. When clothes are optional and an impeccable storyline accompanies the policy, there are so many reasons to #FreeShadowhunters. Matthew Daddario, Dominic Sherwood, and more don’t appreciate the restriction clothing causes (not that we’re complaining). Therefore, plenty of material abounds for us thirsty members of the Shadowfam.

Shadowhunters still hasn’t been saved, but that doesn’t mean we can’t go back and rewatch all over again – especially the upcoming scenes. If you’re thirsty and in dire need of a tall, frosty glass of shirtless, just read on and salivate along. Tweet us your favorite moment using the hashtag #ShirtlessShadowhunters and warm up with this torso fire as the weather outside gets frightful. 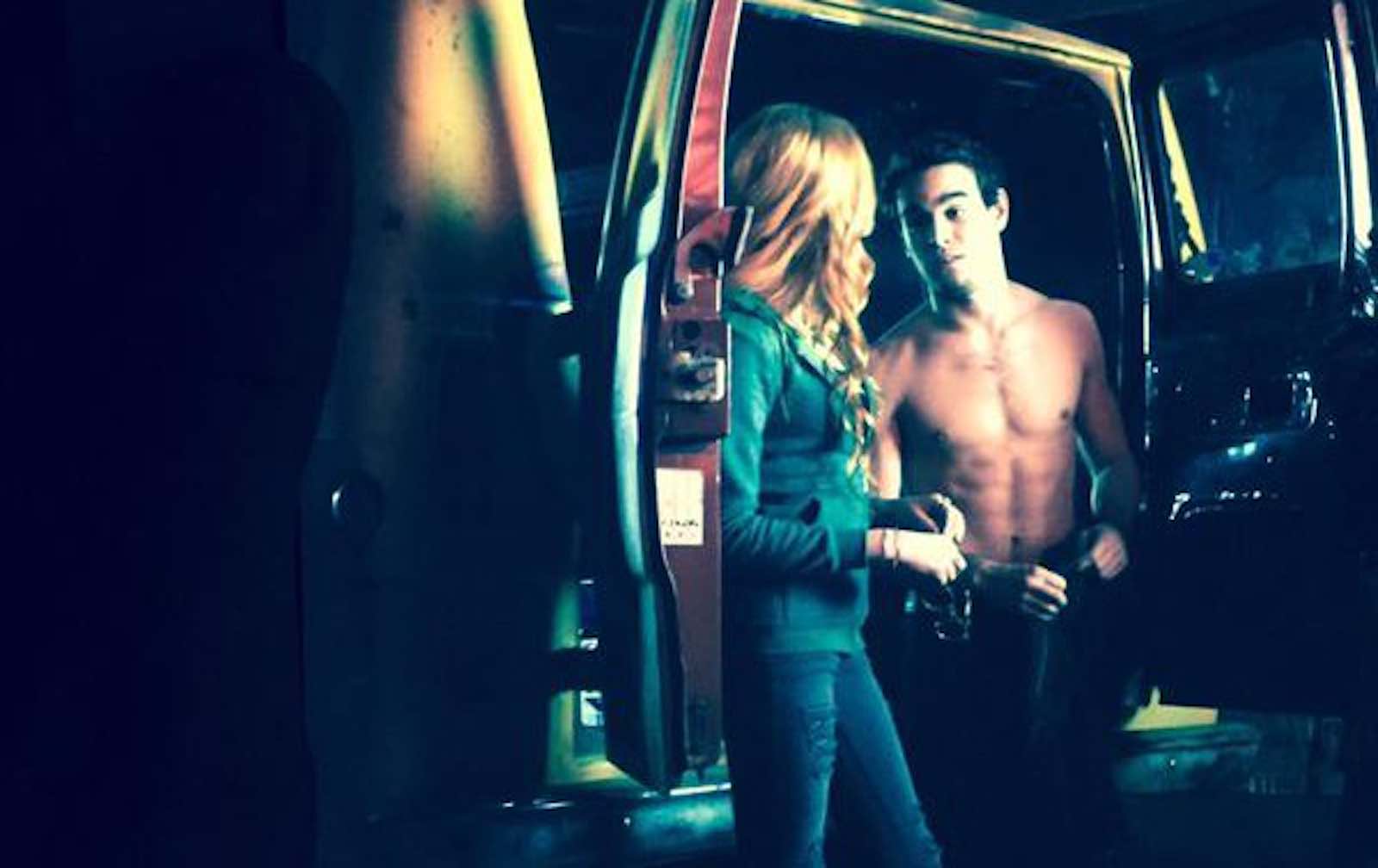 Even in the pilot, we ‘re greeted by shirtless young men. Simon (Alberto Rosende) pulls his tee off when deciding on a new band name. Casual. It certainly captures the attention of Maureen (Shailene Garnett) and Clary (Katherine McNamara). Even we’re left wanting more from supposedly timid Simon. If this is what’s in store for the remaining seasons, we’re in!

Shadowhunters is perfect for thirsty fans everywhere and this pilot proves that. We can see why Maureen is all over Simon as he just strips in the middle of an alleyway – if that’s what you’re into, of course.

Training is all these Shadowhunters seem to do. Clothes just become weird at this point. Hodge (Jon Cor) makes his shirtless debut in episode 2 of Shadowhunters, and it’s hard to forget indeed. The former circle member is seen training when greeted by Jace and Clary.

The joy is short-lived as Hodge puts on layers just when things were getting interesting. The director giveth and the director taketh away! This gif is constantly on a loop in our heads. Only two episodes in, Shadowhunters really know how to make an entrance. (Shirtless, of course.) 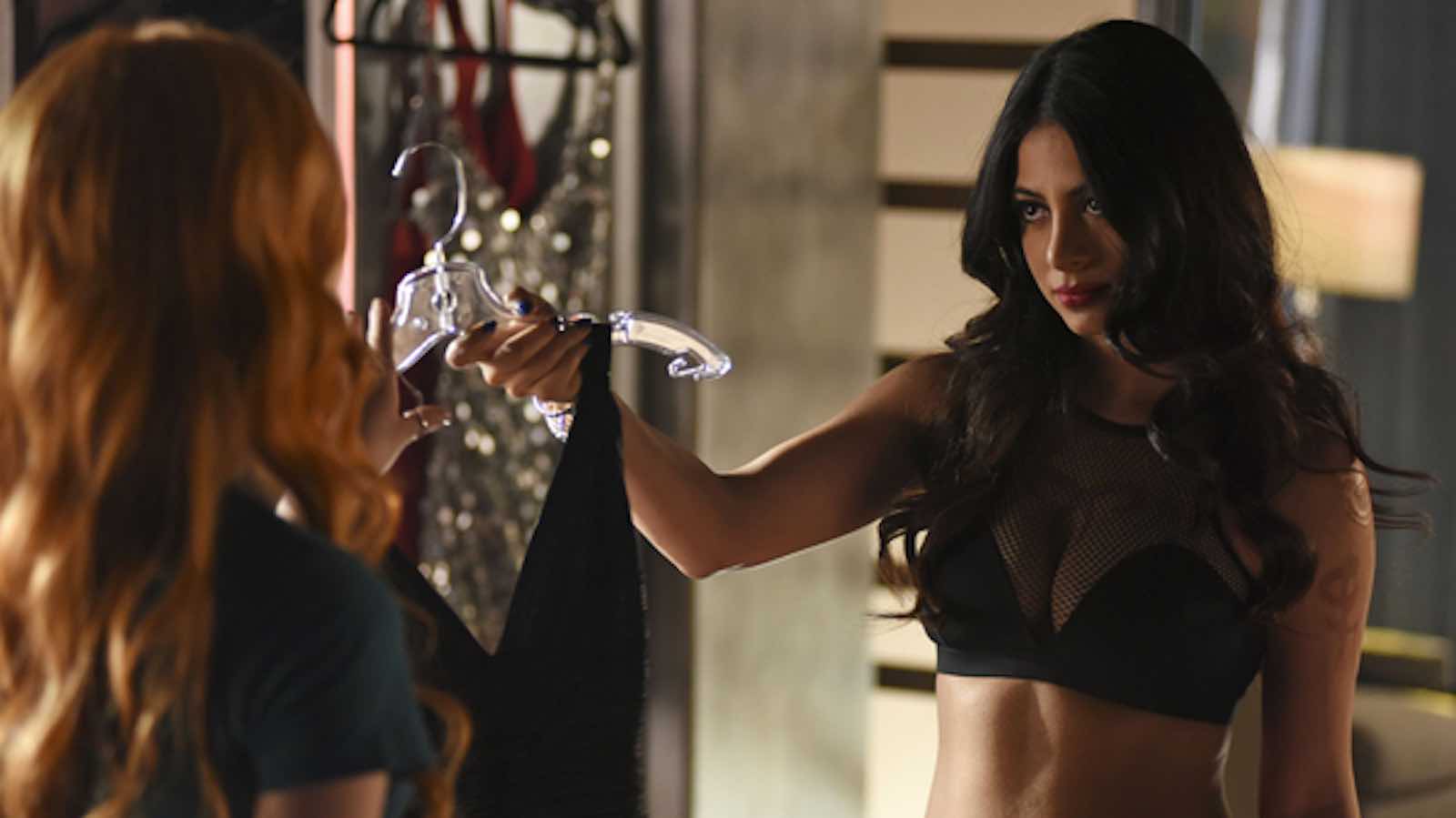 S1E4: Badass Izzy at it again

Izzy (Emeraude Toubia) is not known for wearing layers, and although she may not be entirely shirtless per se, we can’t help but admire her. Simply put: Shadowhunters sports a beautiful cast. During this episode, we’re greeted not only  by a shirtless Jace but a shirtless Izzy lounging around in a tight af sports bra.

Abs for days! She has a figure to die for and the attitude to boot. If this isn’t fitness inspo, we don’t know what is. Gotta stay away from extra servings this Thanksgiving. Including Izzy in our #ShirtlessShadowhunters content seems only fitting when her aesthetic is “the less clothing the better”. 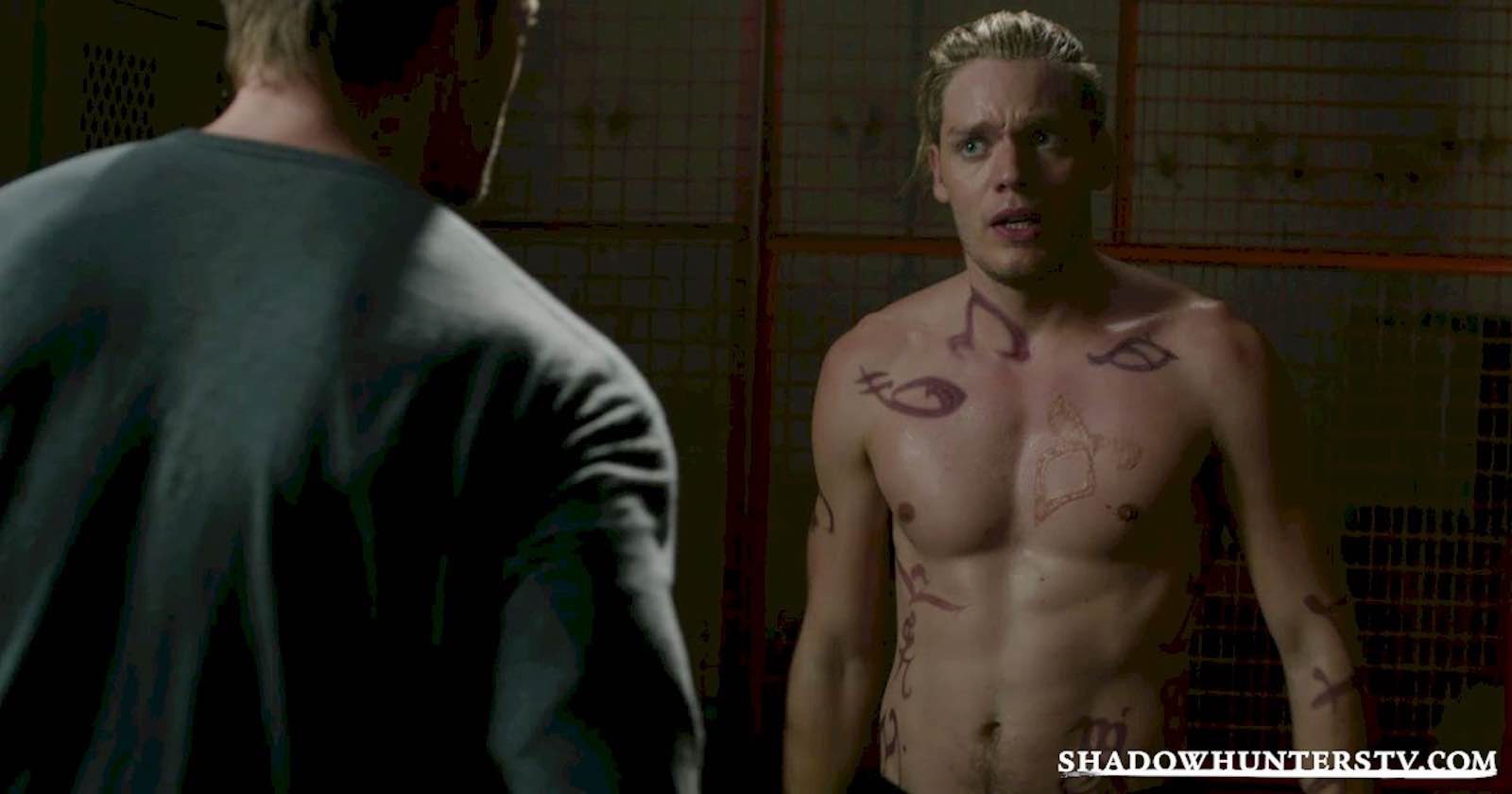 The fact that Jace is shirtless doesn’t distract from Michael and his questionable parenting skills. Michael questions whether Clary is the reason Jace is weak and makes Jace question his relationship. This shirtless moment may not be all fun and games, but sometimes we have to take the good with the bad.

Simon is in his room getting ready for a date with werewolf Maia (Alisha Wainwright) when Clary walks in just as Simon is getting dressed. Just like us, Clary is salivating and left in a daze when she sees what Simon’s working with. Alberto’s definition is insane, and everyone pauses at that moment just to appreciate the beauty on screen.

With amazing moments such as these, it’s a wonder why anyone would want a world without shirtless Shadowhunters. Even more reason to get those #SaveShadowhunters petitions going. 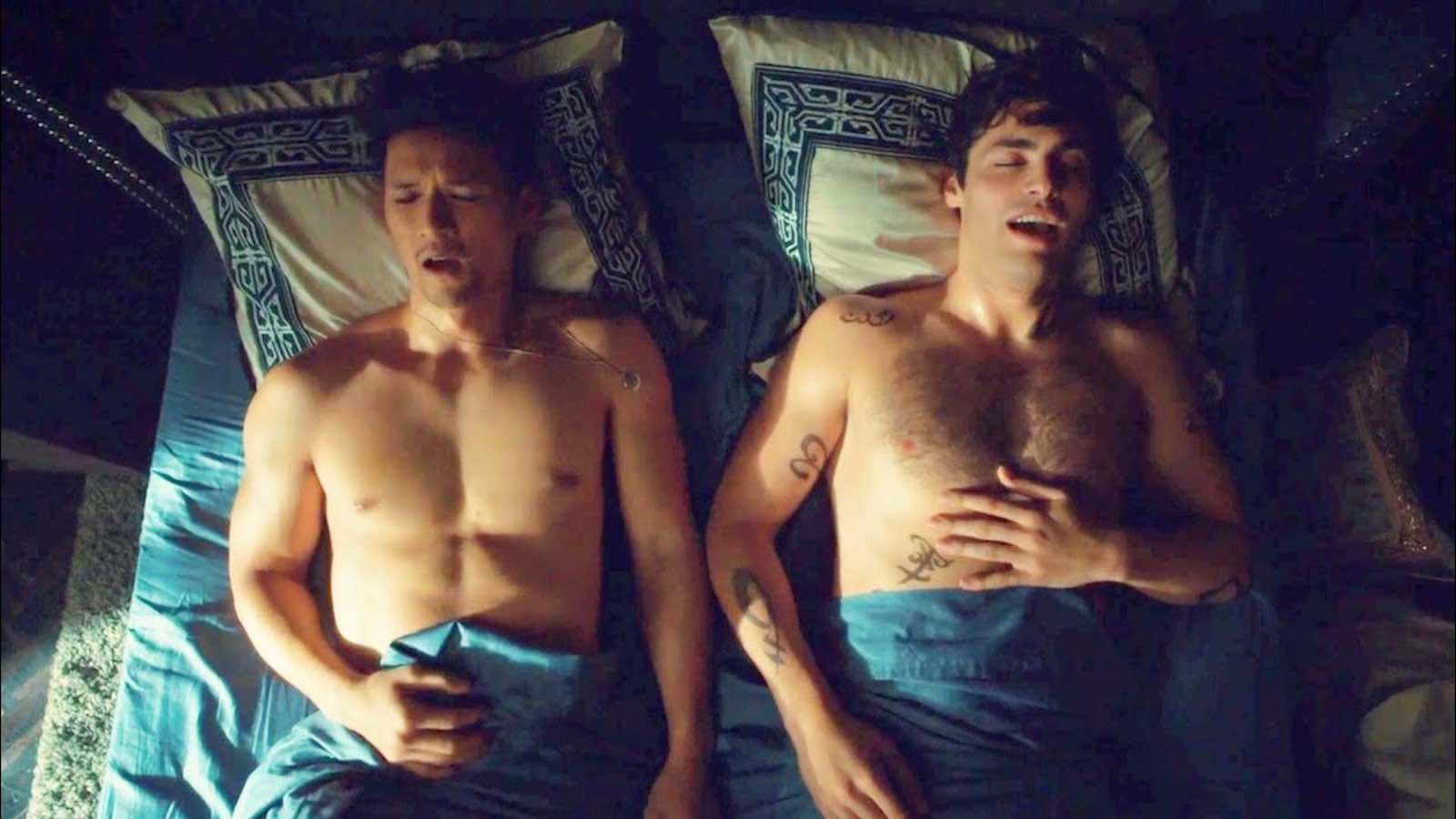 You may refer to this episode from here on as “The Giant Thirst Trap”. A hot Malec training scene leading to an equally hot post-workout session gives us a shirtless Alec (Matthew Daddario) and Magnus (Harry Shum Jr.) in bed and breathless? Gee, we wonder what went on there.

We get two shirtless characters for the price of one in this Shadowhunters episode and we aren’t complaining. Malec stans everywhere rejoiced because this episode quenched the thirst that is the Shadowfam. Excuse us while we go research this episode some more!

We can’t get enough of #ShirtlessShadowhunters content and neither can our thirsty Shadowfam. Be sure to check out the episodes above as motivation and research for your efforts in trying to save Shadowhunters.