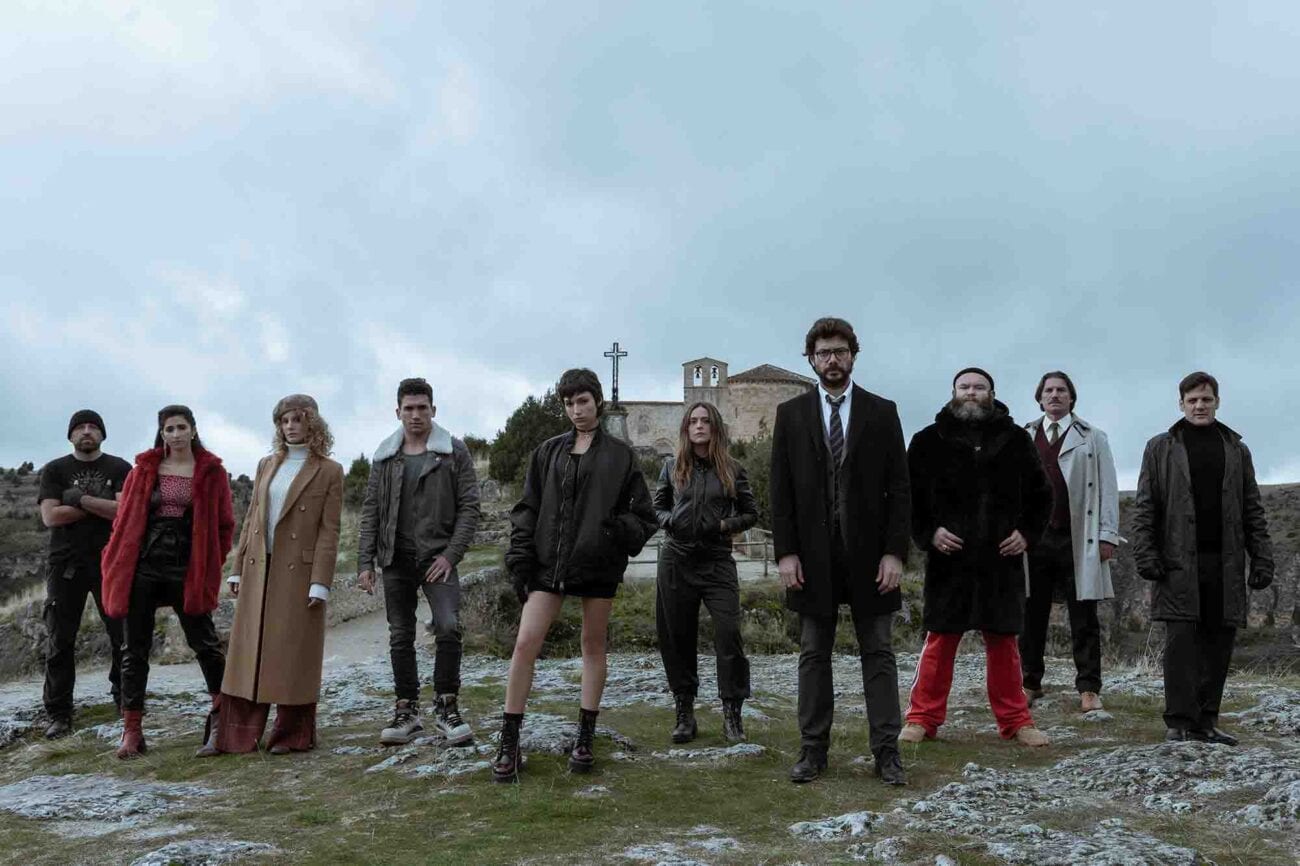 Our Money Heist obsession is still going strong, and now that season 5 (the final season) is in production we’re fueling our obsession with behind-the-scenes pictures, fan theories, and social media posts from the cast & crew.

We are absolutely losing it over what some of these pictures could mean, so please, join us on our fan frenzy and look at these pictures & posts with us while we slowly lose our minds.

Spoiler warning: If you don’t want to know anything about the upcoming season then some of these pictures may constitute spoilers for season 5 of Money Heist.

Álvaro Morte is great at avoiding an accidental spoiler being posted to his Instagram. He keeps posting pictures of signs that say “Vancouver Media” with his face in them, which proves he’s working on Money Heist, since that’s the production company making the show, but we’ve seen no costumes or sets in any of his Insta pics . . . yet.

We’ll keep waiting, but in the meantime we’re still loving this picture because one, it gives us hope his character remains alive, and two, he’s just a very handsome man.

These behind-the-scenes pictures have our minds whirling. Each one has hints of what to come in Money Heist’s season 5, but we can’t parse exactly what any of it might mean.

Pedro Alonso (Berlín) posted the first image to his own Instagram account – the one of him with newcomer Patrick Cirado on set – saying “Monty and Python, obvious. 🦧❤️🦋🔥⛩ Not the past, not the future. @patrick.criado the present.”

While the emojis have us at a bit of a loss, this cryptic English caption almost has us wondering if the insane fan theory that Berlín never died might actually be true. We know we’ve bashed the theory in the past, but we’re starting to wonder if we should just start eating our words now.

While we’re down the rabbit hole

While we’re entertaining the insane theory of Berlín still being alive, here’s a picture from Alonso’s personal Instagram page with actor Darko Peric who plays Helsinki.

Peric’s character is still alive, and as far as we know, Berlín is dead. So if these two are filming a scene together we see three potential reasons: it’s from the time the first heist was being put together, Helsinki dies & they have one of those afterlife scenes like Nairobi had, or . . . Berlín isn’t dead.

A screenshot taken from Úrsula Corberó’s Instagram stories shows the actress all dressed up and ready to play Tokyo again.

Although, if she’s in costume here, we can’t help but notice that is definitely not a red jumpsuit. What does this mean for the character? Is it a flashback, a flash forward, or is it also the present like Pedro Alonso said?

Since Berlín is a fan favorite and you likely would be perfectly happy staring at him all day, have a few more behind-the-scenes images of Pedro Alonso filming for season 5 of Money Heist.

These ones don’t seem to reveal much of anything, but they’re still fun to look at.

Actually, you know what strikes us? We haven’t seen any pictures of Alonso filming with Morte. In previous seasons, since Berlín’s scenes have all been flashbacks after season two, they almost exclusively include The Professor (his brother), but so far, none of these scenes seem to include him. There’s something for fan theorists to ponder.