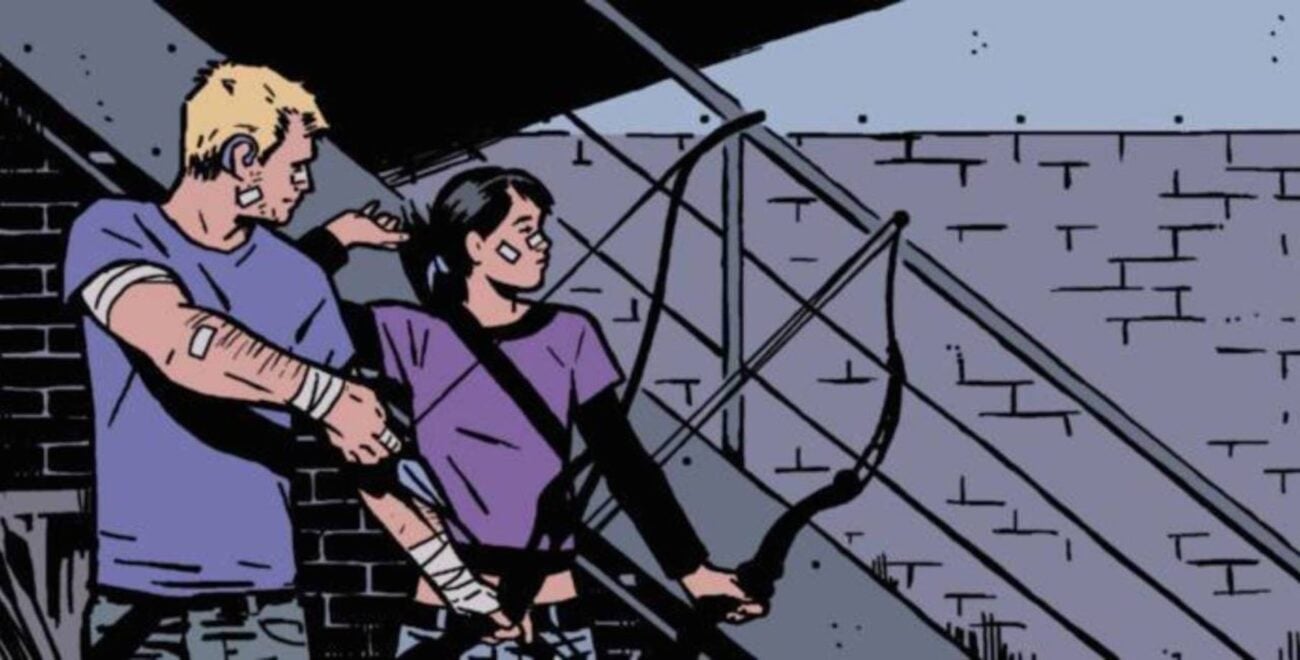 Kate Bishop: Peek at new photos of Hailee Steinfeld as the iconic hero

Kate Bishop is Hawkeye. Well, she’s a Hawkeye. Here’s where things get a little bit complicated when you have two people sharing one codename running around. As many of you know, the Hawkeye series, which stars Jeremy Renner as Clint Barton and Hailee Steinfeld as Kate Bishop, is currently in production. Details, naturally, of the series are being kept under the tightest of wraps.

What we are enjoying, however, is seeing Steinfeld all suited up as the iconic Kate Bishop, purple suit and all. It’s so cool from the set photos. And we just keep wanting it in our lives. Sure, Renner is sus & problematic, but maybe this means going forward Kate Bishop will be the primary Hawkeye, and we’re totally fine with that. Let’s take a look at Katie-Kate, shall we?

Who is Kate Bishop?

Kate Bishop is a rich Manhattanite who tried to get her distant father’s approval when she came home from boarding school in the summer. Her mother died and before her death was infrequently home, preferring to travel instead. Due to a relatively isolated & lonely childhood, Kate swore to only rely on herself instead of others, which led to her fiercely independent & blunt personality.

After a kidnapping attempt left her disillusioned with her father and uncomfortable with her family’s wealth, Kate found a role model in Hawkeye, who held his own on a team of people with superpowers. Prior to becoming a superhero, Kate Bishop was sexually assaulted in Central Park, which was the tipping point. In between therapy, Kate also learned different forms of combat, including archery.

Kate Bishop is, naturally, associated with her fellow Hawkeye, even if their relationship fluctuates between on and off. She’s also best known for her work with the Young Avengers and West Coast Avengers. She did some time as a PI following the news that her father was a crook and being cut off from the family money. This, of course, is her background in comics. So it’s subject to change in the MCU.

hailee steinfeld carrying the hawkeye series in her bag 🎯 pic.twitter.com/78EQhQ3jm4

The casting was never officially confirmed until we started seeing set photos of Steinfeld running around with Renner. Hawkeye, in the MCU, is very different from his professional disaster comic’s counterpart. Where are his wife & kids in the series? Good question, we have no idea. Though, after losing them in the Snap, Barton went off the deep end and became, like, The Punisher.

Except he killed all the bad people left behind after the Snap that took his entire family. Like, wow, that was 50/50 shot, which means this is the worst luck in the world. Either way, his family is either at the farm still happy or Barton ended up divorced from his wife or something happened. You have to imagine that, following the Blip, divorce rates are definitely rising.

Barton’s kids are, reportedly, appearing in the series. So that’s something at least. Honestly, we’re ready for the addition of Lucky the Pizza Dog to the MCU.

hawkeye trending for no reason, but hey let’s talk about kate bishop the superior hawkeye pic.twitter.com/Z50wGlwxxq

In addition to introducing Kate Bishop to the MCU, Hawkeye will also see the introduction of Echo/Maya Lopez. Played by Alaqua Cox, Echo is a deaf Native American who can perfectly copy another person’s movements. A spinoff series starring Cox in the role is reportedly in development. Additionally, the MCU’s new Black Widow (Florence Pugh) is set to guest in the series.

Vera Farmiga, Fra Fee, Tony Dalton, Zahn McClarnon, and Brian D’Arcy James are also set to star in the Hawkeye series. Hawkeye is set for a release sometime in 2021 with it we get to see Kate Bishop in action.