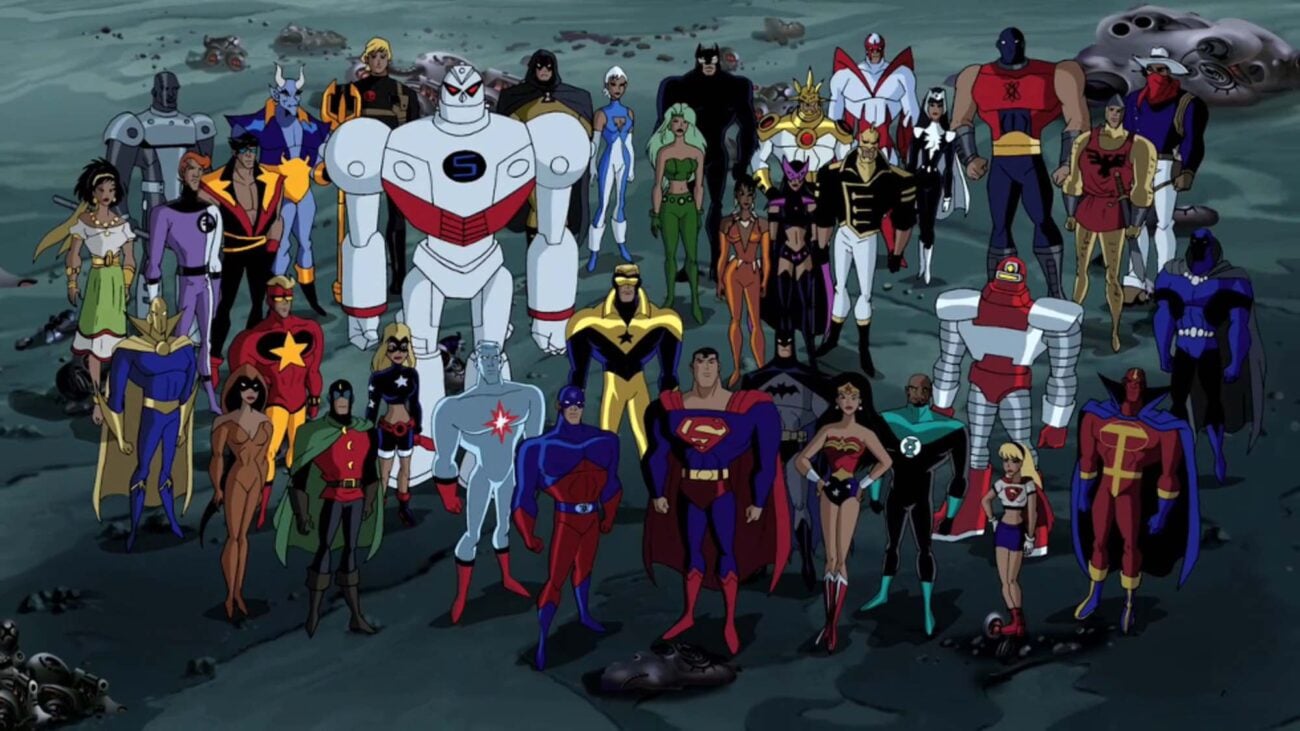 Give up on the DCEU: The DC animated movies you need to watch

It’s safe to say that in terms of the current superhero movie market, Marvel pretty much has it on lockdown with the MCU. It rules the box office with an iron fist. The DCEU, however, has not done as well. Partially, this is due to wanting to be Marvel so badly, but rushing through a process that took years to build up for the rival studio. And, well, Wonder Woman & Aquaman were good. Start over with the rest of it.

Now, there is an arena where DC has Marvel soundly beat. That’s in terms of its animated properties. DC has Batman: The Animated Series, Justice League, Static Shock, Justice League Unlimited, Batman: The Brave & The Bold. Marvel doesn’t have quite as many truly great ones to its name. In terms of animated films? Marvel has Into the Spider-Verse, but DC animated movies are legion.

Here are some of the best DC animated movies to watch while the DCEU gets its act together. 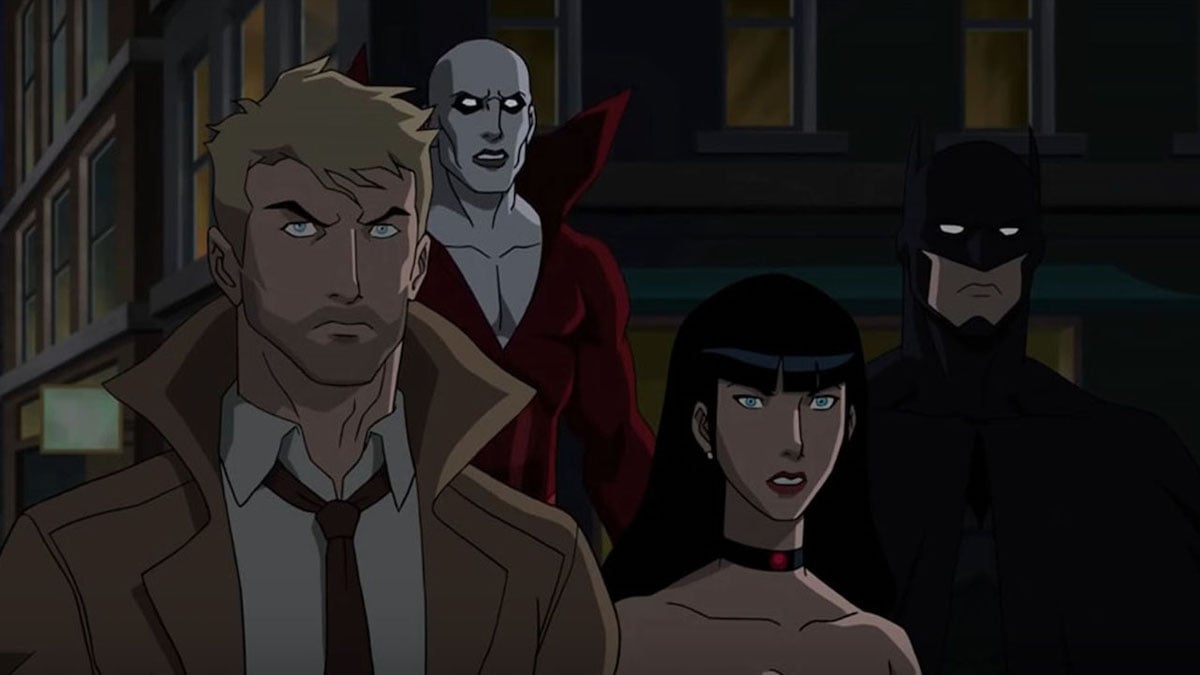 Matt Ryan has truly made his mark as John Constantine in DC properties. He was popular enough that he popped up in the Arrowverse, and he proved to be popular enough for the animated movie of DC’s Justice League Dark. This film sees the magical heroes of the DC world (and Batman) team up to take down Destiny, who wants to descend the world into chaos, darkness, etc.

Justice League Dark is definitely more adult oriented, as with many DC animated movies. So, yeah, don’t show this to the kids unless you want to give them some serious nightmares. Ryan is amazing as Constantine, and Justice League Dark was, perhaps, the only good thing to come out of New 52. This movie definitely lives up to that legacy in a great way. 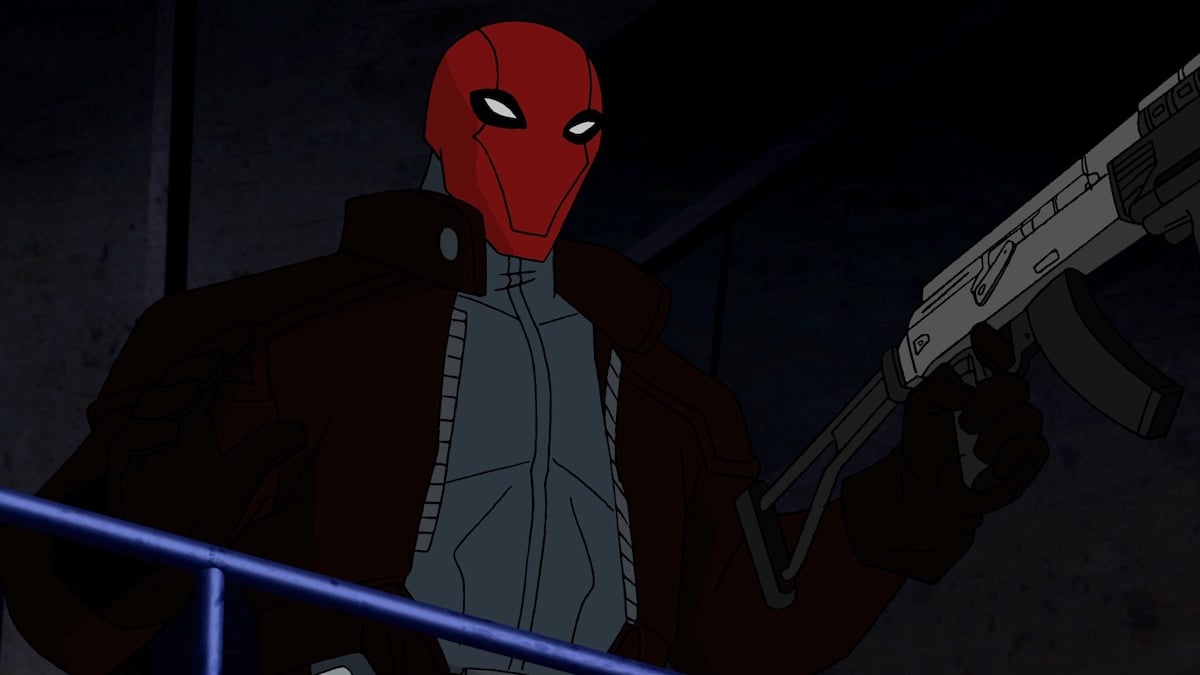 Missing Jensen Ackles? The Supernatural star pops up as Jason Todd/Red Hood in this 2010 DC animated movie. Not only is the voice cast phenomenal with Bruce Greenwood as Batman and John DiMaggio as the Joker, but Under the Red Hood features some of the most emotional moments in the entire canon of DC animated movies. Not only that, the film takes the popular source material and brings it to powerful life.

Effective, heartbreaking, emotional, and stunning, Under the Red Hood will give you chills. It’s honestly something that the DCEU should use a template for their future movies. Because it’s just that good. 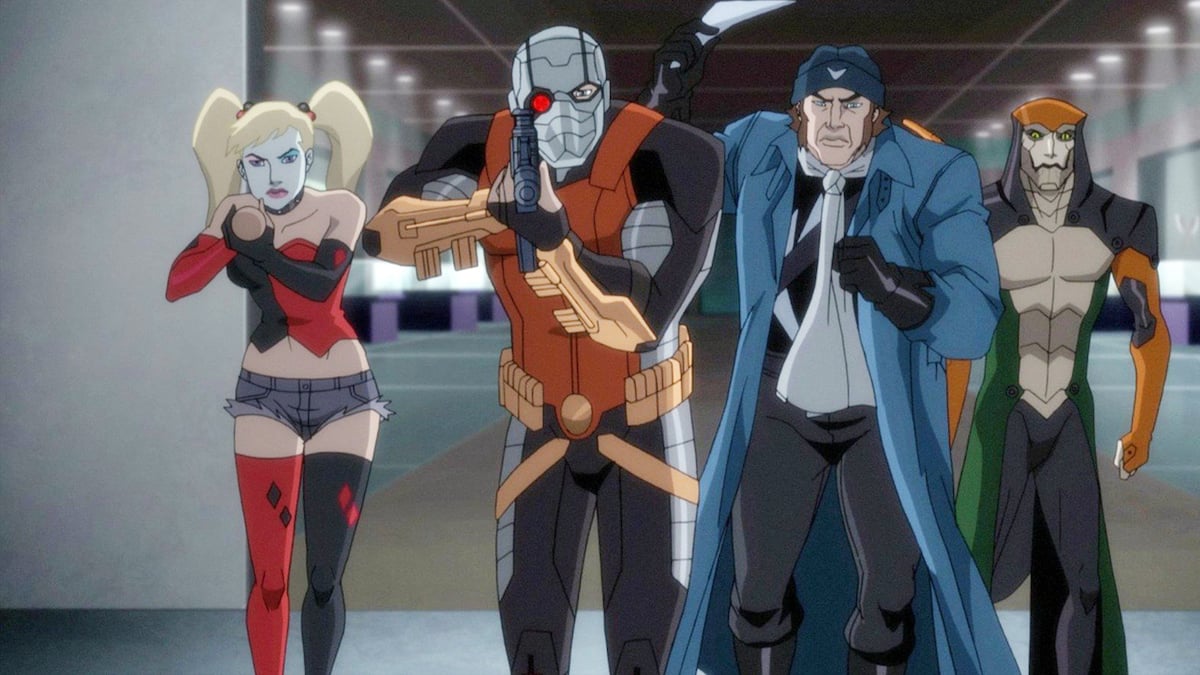 This 2018 DC animated film is much better than 2016’s Suicide Squad, which isn’t saying that much honestly. But it’s still a great flick either way. Hopefully, this sort of chaotic, fun energy is what James Gunn will bring to the soft reboot, The Suicide Squad later this year. The plot is straight forward, but, also, you know, kind of hilarious and dark as well. That’s what we need from a good Suicide Squad movie.

Amanda Waller, dying, sends Task Force X to get her a card that will let her into Heaven with no strings attached. Needless to say, she’s not the only one interested in getting that card. Because Hell? Very real in the world of DC. So the concern of going to Hell is pretty valid, especially when you’re someone like Amanda Waller. Either way, the film is straightforward, fun, and, hopefully, the vibe we’ll get later this year in live-action. 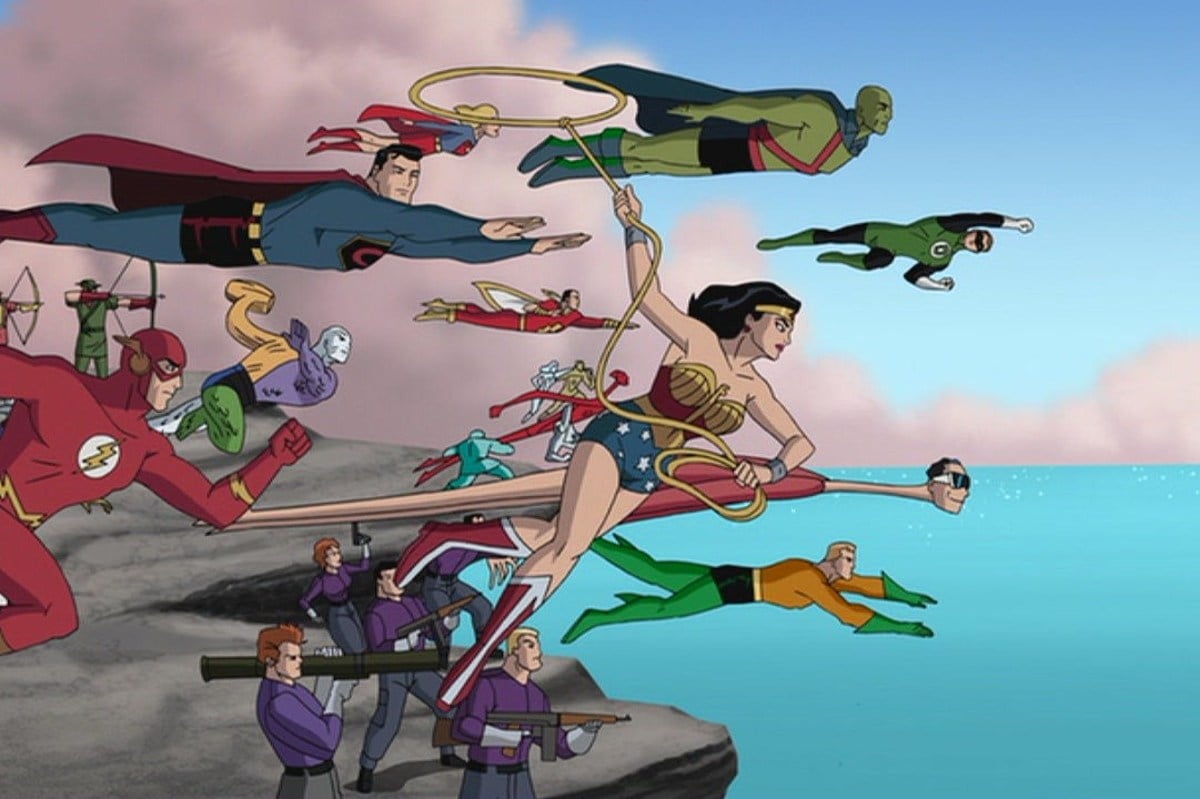 Based on the comic miniseries DC: The New Frontier by the late, great Darwyn Cooke, Justice League: New Frontier is an absolutely amazing adaptation. The series served as a way to build a bridge between the Golden Age and Silver Age of comics while also very much tracking the changes between the two eras. It’s glorious and a must read for any comic fan.

Similarly, Justice League: New Frontier brings Cooke’s art to life, which is stunning on its own. It’s a very ensemble heavy movie, which is perfect as the Justice League should, in essence, be an ensemble cast. No one feels overlooked. Everything is very balanced. While there is that Silver Age brightness, there’s a sort of darker undercurrent as well, making the brightness shine all the more. 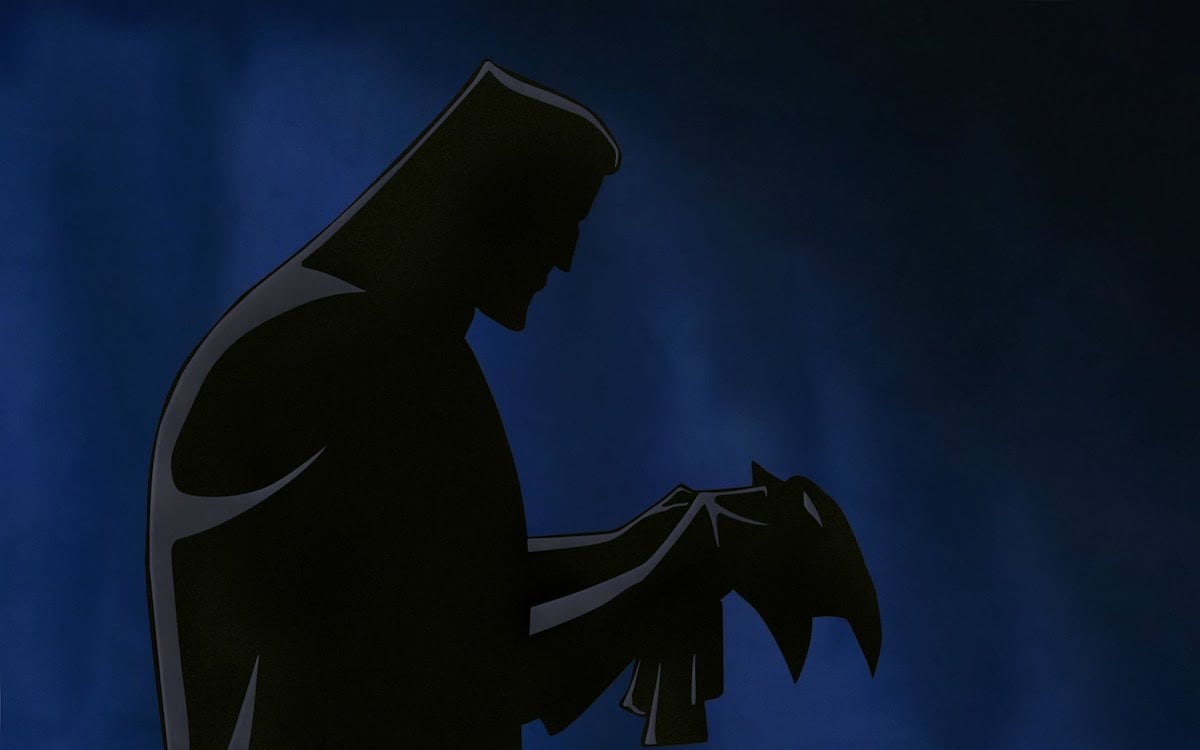 Batman: Mask of the Phantasm

Batman: The Animated Series is perfect, flawless. It’s the Beyonce of animated superhero shows. Don’t @ us because, deep down, you know that we’re right. Mask of the Phantasm is every bit as good as The Animated Series. Unfortunately, it bombed at the box office due to the last minute decision to bring the movie to the bring screen with little-to-no advertising against Tombstone and Grumpy Old Men.

Not the best plan. Even so, many who have seen the film consider it to be the best Batman movie ever made. Yes, even including the 1989 Batman movie in the conversation. The film features the legendary voice cast of Batman: The Animated Series including Kevin Conroy as Bruce Wayne/Batman and Mark Hamill as the Joker. C’mon, you can’t get better than that, DC animated movies.