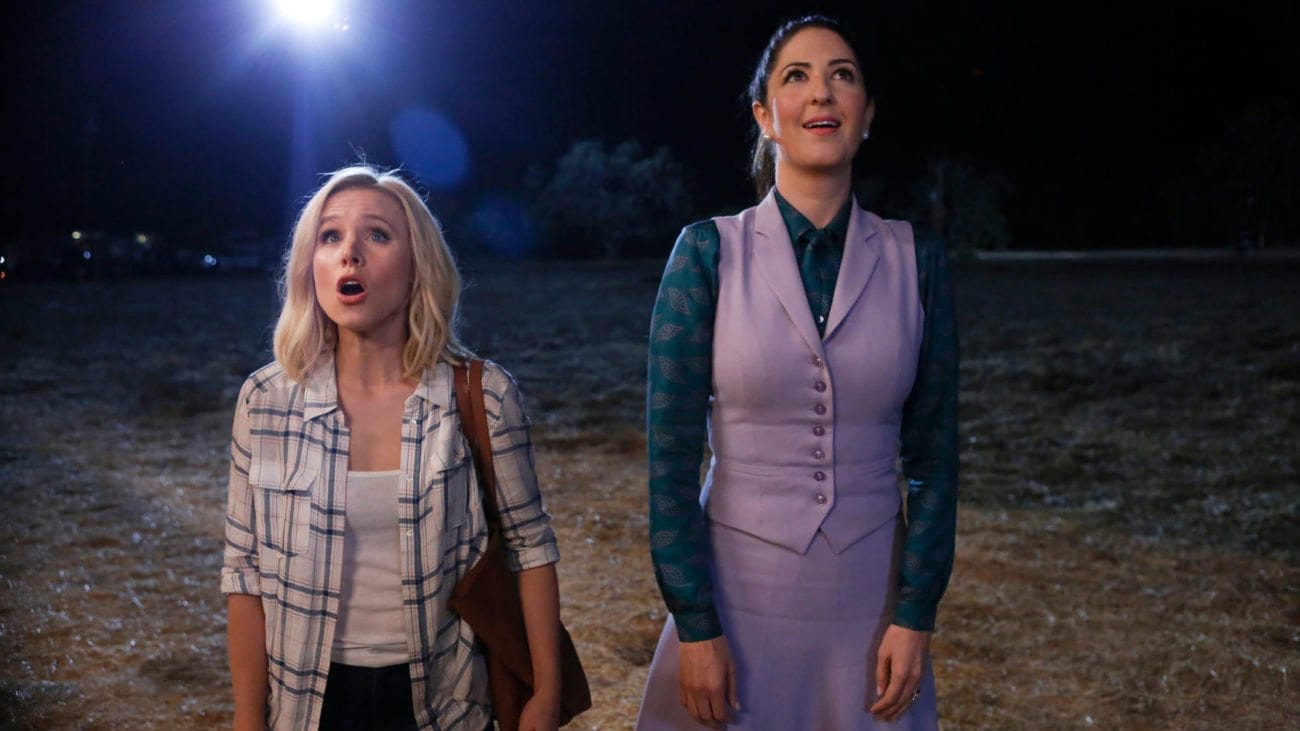 The best visual gags in ‘The Good Place’ episodes

The Good Place is the best show. It just is – it’s an objective universal truth. No moral particularism here! The Good Place wrapped up its second season with yet another head-spinning finale that refreshed the whole show in an instant. Then the third season took us hopping through the multiverse: Good, Bad, and in-between.

The Good Place has switched itself up every single episode, usually cramming a whole season into twenty minutes. Michael Schur’s afterlife masterpiece has become a real hit for NBC, with a fourth season on the way.

We thought we’d pay some special attention to the puntastic visual flair that’s been with the series since day one. Below is just a handful of our favorite little gags. Beware: massive spoilers await! Enter at your peril! 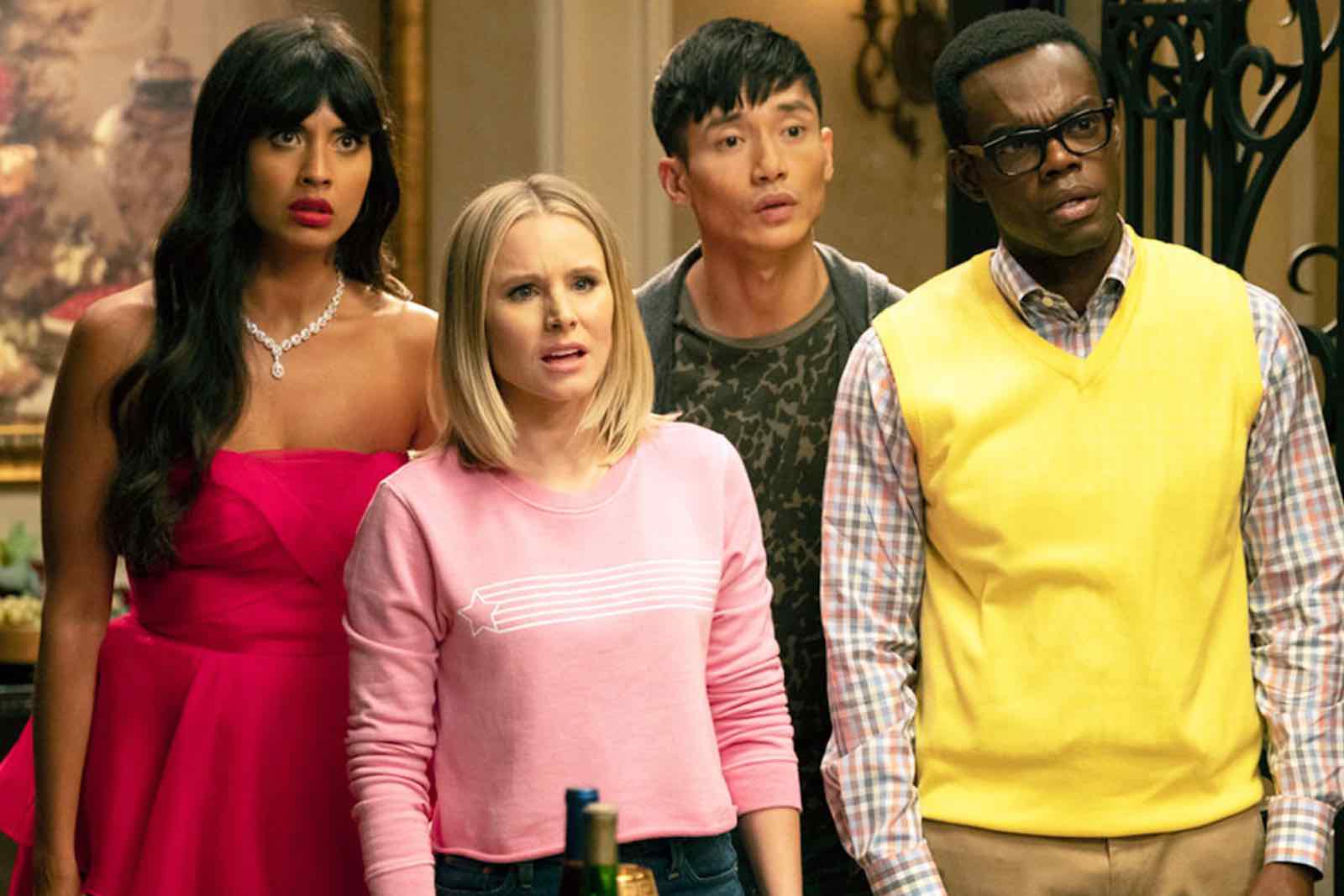 The first season of The Good Place introduced us to a delightful, whimsical setting filled with lovely characters – all before the rug was pulled out from under our feet. Turns out they’ve been in a version of the Bad Place this whole time. Hell is other people!

Demon architect Michael (Ted Danson) constructed the faux-Good Place neighborhood to engineer an infinite hell in which human beings would instead torture each other. What a twist! It took Eleanor (Kristen Bell) in a moment of epiphany to realize it.

However, if you’d been paying attention, the twist was in the background the whole time. Not just with Michael literally kicking a lovely puppy in the opening ep, the deadliest and most sickening thing of all time, hiding in plain sight. Everyone witnessed it, but no one recognized it.

All restaurants in the initial Good Place were replaced with frozen yogurt outlets. Froyo – a devilish mixture of foodstuffs – seemed to be the only item one could consume in this supposed good place. 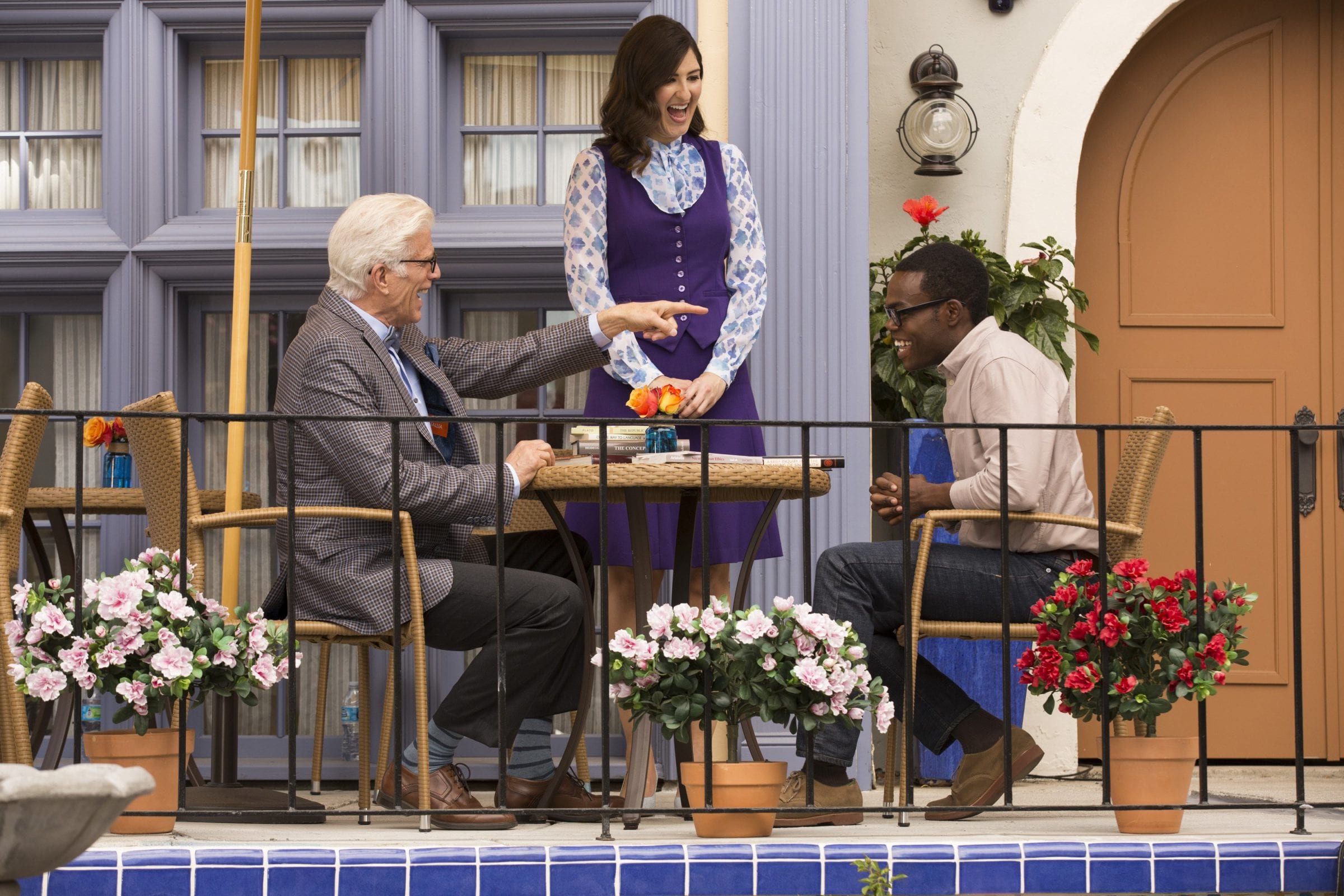 In the second season’s third episode, and the best television of 2017, “Dance Dance Resolution”, Michael’s entire world was spun into chaos. We watched as the Good Place was rebooted over 802 times in the span of twenty minutes, with Michael each time finding that, no matter his formulae of torture, the humans always figured out the twist too early and needed their memory wiped, again.

In this episode from Megan Amram and Cabin in the Woods director Drew Goddard, over 802 separate Good Places had to be fully realized. And so, in the background, the food stores changed from froyo stands to all kinds of delicious-pun-based eateries.

Amram posted on Twitter a whole bevy of unused puns, from Al Dente on the Western Front (a pasta place) to Yeast Infech-yum (a bread bakery). We saw, as the neighborhood was rebooted, all kinds of restaurants spring up with punny names and likely malicious foodstuffs inside. Which reminds me:

From the same episode “Dance Dance Resolution”, Chidi and Eleanor start talking around a clam chowder fountain described by her as “just hot ocean milk with dead animal croutons”. There’s probably some deeper meaning in there somewhere.

We’re big fans of practical sets, and knowing some set designer had to devise a whole working and realistic-looking clam chowder fountain (“savory latte with bugs in it” according to Eleanor) is itself a good joke. 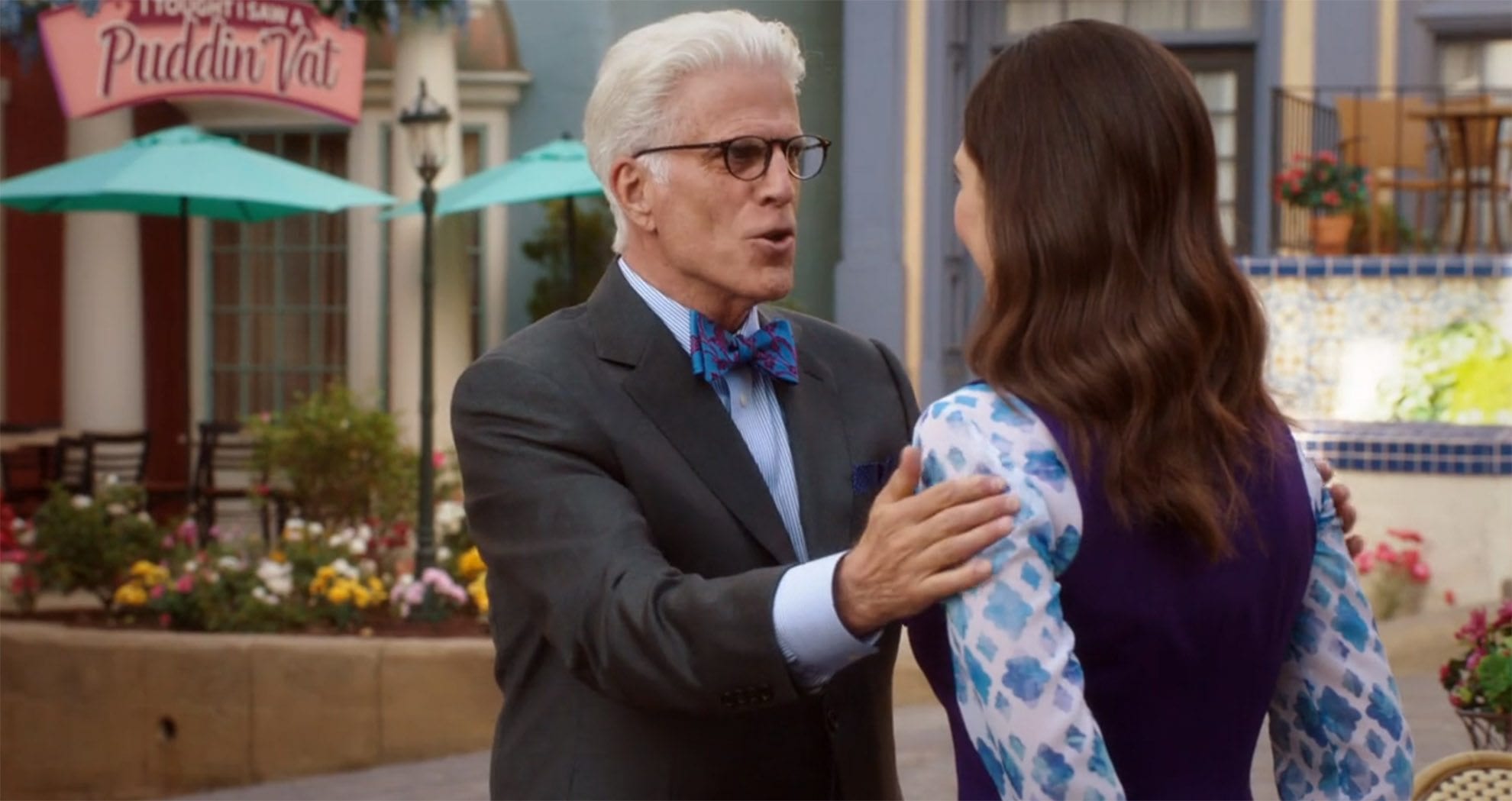 In episode six of the second season, we were treated to a whole chunk of relationship drama. Eleanor fancies Chidi, and Tahani & Jason are going through a bit of a tiff. Oh, and Janet (D’Arcy Carden) is remembering the fact that she and Jason fell deeply in love, and it’s causing her to malfunction, badly. As in literally break apart. Her thumb grows a bit too large and some other weird stuff happens to and around her.

Some of the best visual gags include a whole vomiting-of-pennies scene which has been GIFed and memed infinitely across the world wide webosphere. Janet is probably the best character on the show – “not a robot!” – or maybe it’s Michael? Nope, it’s Eleanor. But Chidi! And Jason?! And Tahani. You’re spoiled for choice in this show, but Janet’s wacky shutdowns in the mid-second season are a visual treat.

Given some colorful aesthetics, like a totally unnecessary iOS app that you pick up now and then, the random object generator comes from the same ep. Michael uses it to test Janet’s capabilities to see if she’s normal again. This visual is crammed with little comedic nuggets, like when we learned in the first season how you gain and lose moral points for innocuous things like holding the door open for people.

The random object generator includes stuff like “WOMEN’S XXS BOLT-ON WANDERERS SWEATPANTS” and “AN EASTER ISLAND HEAD DRESSED LIKE GLEEK FROM THE ALL-NEW SUPER FRIENDS” – you get the idea. The Good Place constantly rewards eagle-eyed fans looking out for small giggles here and there.

More of an in-your-face reference, this one might make a few people a little nostalgic or even teary-eyed. The Good Place is chock full of emotional and good-hearted moments, and Michael becoming much more human over the course of the second season has been a real par for the whole course. When he turns up in the finale behind the bar and declaims the whole lesson of the show – “What do we owe to each other?” – it’s a stunning moment of television.

The moment is made even more wonderful by the obvious reference. For those who have spent their life on the planet Mars, Ted Danson appearing in this guise is a heavy callback to Danson’s time playing retired pro baseball pitcher Sam Malone on the 80s hit comedy Cheers. Here he plays the bartender again, slinging a bar towel over his shoulder just like good ol’ Sam.

The Good Place has fast become one of our favorite shows, an imaginative, comedic romp crammed full of heart and moral lessons, with some meta-narrative elements as icing on the whole shebang. We can’t wait to see how it once again reinvents itself – and we could not be more delighted to know nothing whatsoever about where it’s headed. 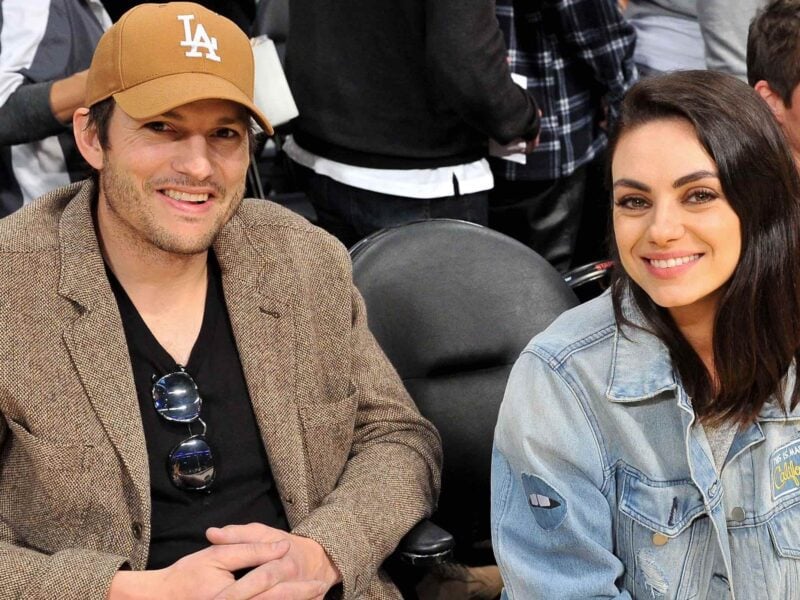