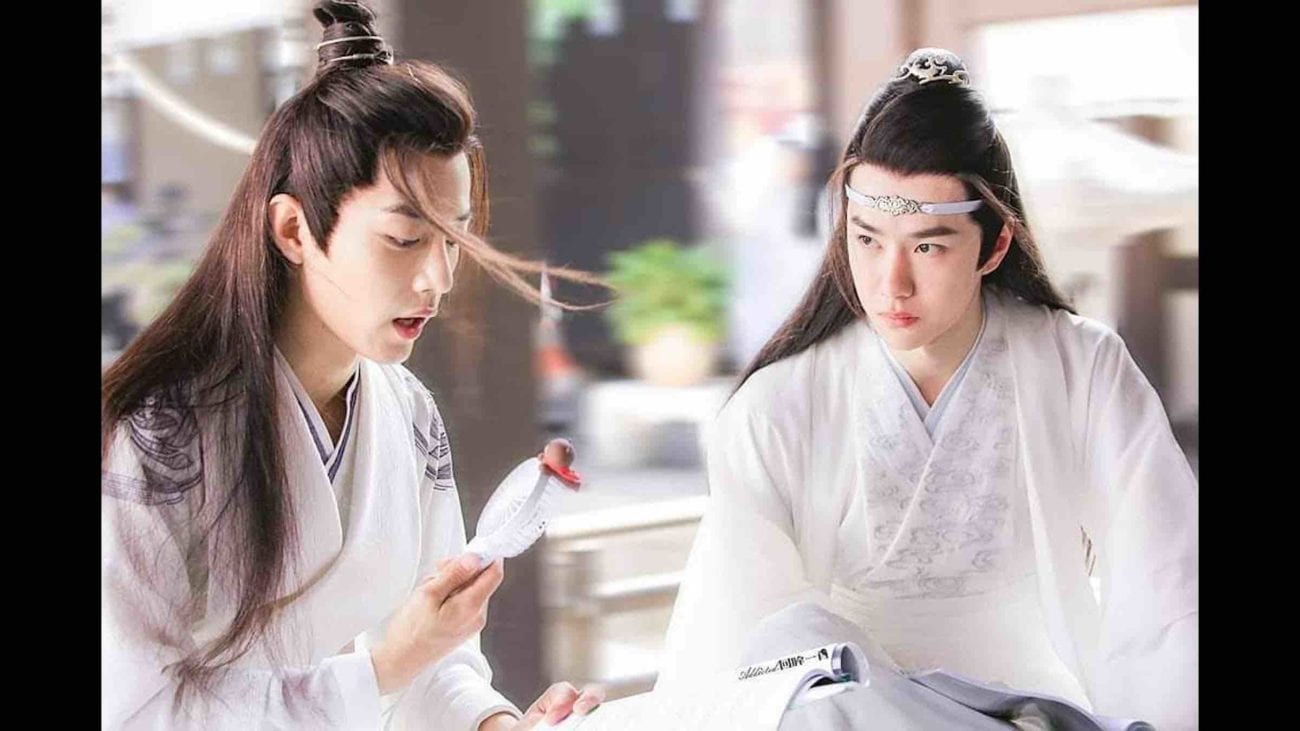 ‘The Untamed’: 5 times Wei Wuxian made us laugh

In case you’ve been living under a rock & don’t know yet, The Untamed is a Chinese BL drama based on the novel, Grandmaster of Demonic Cultivation by Mo Xiang Tong Xiu. Set in ancient China, it follows a community of supernaturally charged cultivators as they rid the land of evil & corruption.

At the heart of it all is the story of Wei Wuxian (Xiao Zhan) & Lan Wangji (Wang Yibo). While the show is highly censored due to strict laws & regulations in China regarding LGBTQ depictions on television, the forbidden relationship that develops between these two characters takes center stage. 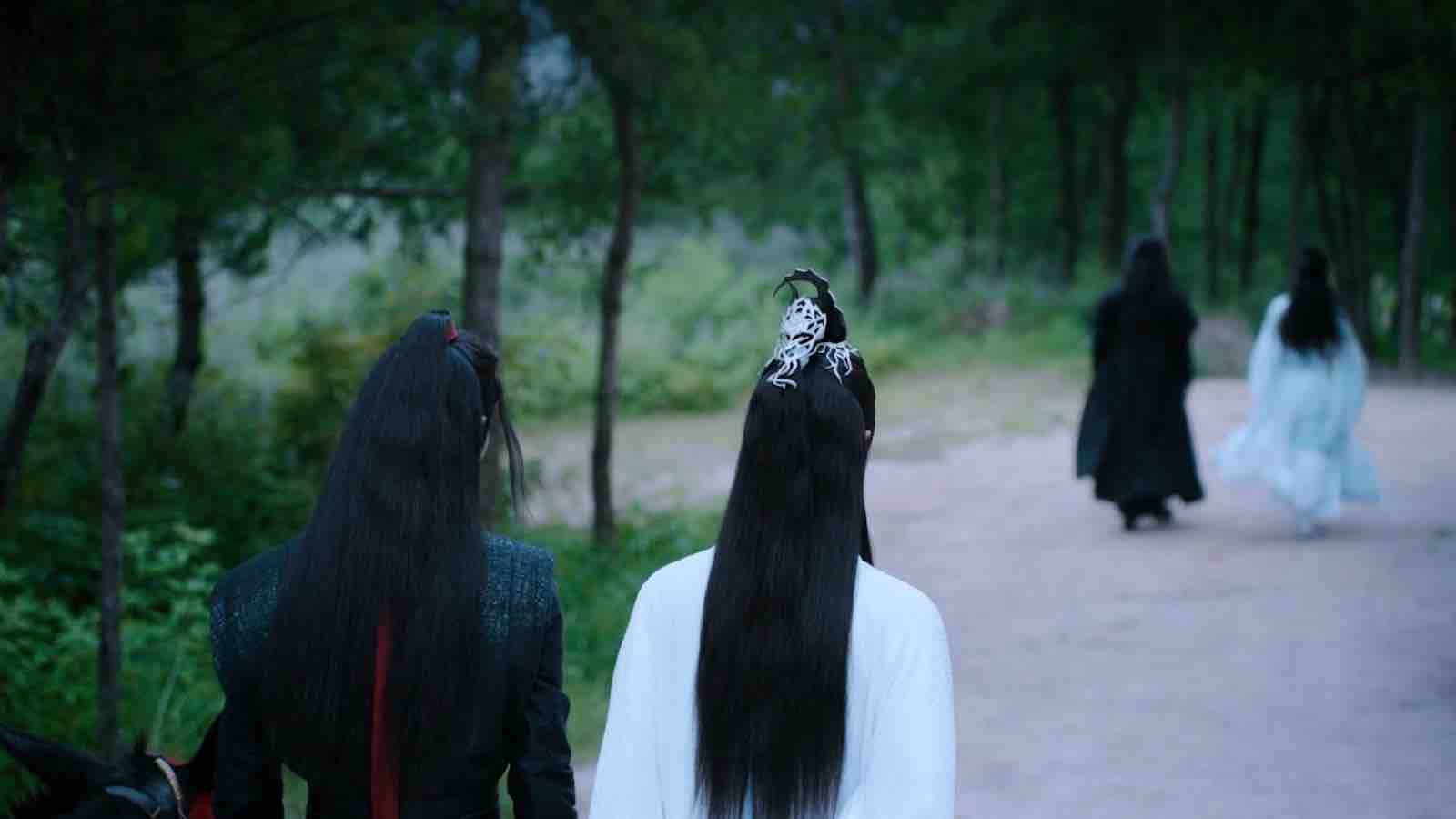 The two characters couldn’t be more different. Where Lan Wangji is a proper, upstanding rule abider, Wei Wuxian is a mischievous soul who just wants to have fun. As the series evolves & the relationship between the two boys develops, the differences in their personalities are what make this relationship so appealing.

The notion that ‘opposites attract’ is very real in this instance. While the couple will make you cry a lot, their differences also provide many points of pure comedy throughout the show. Wei Wuxian, in particular, never fails to bring the laughter.

There are so many points throughout the series that this beloved character delivered the hilarity. Come with us as we unpack our favorite five moments that Wei Wuxian made us laugh. 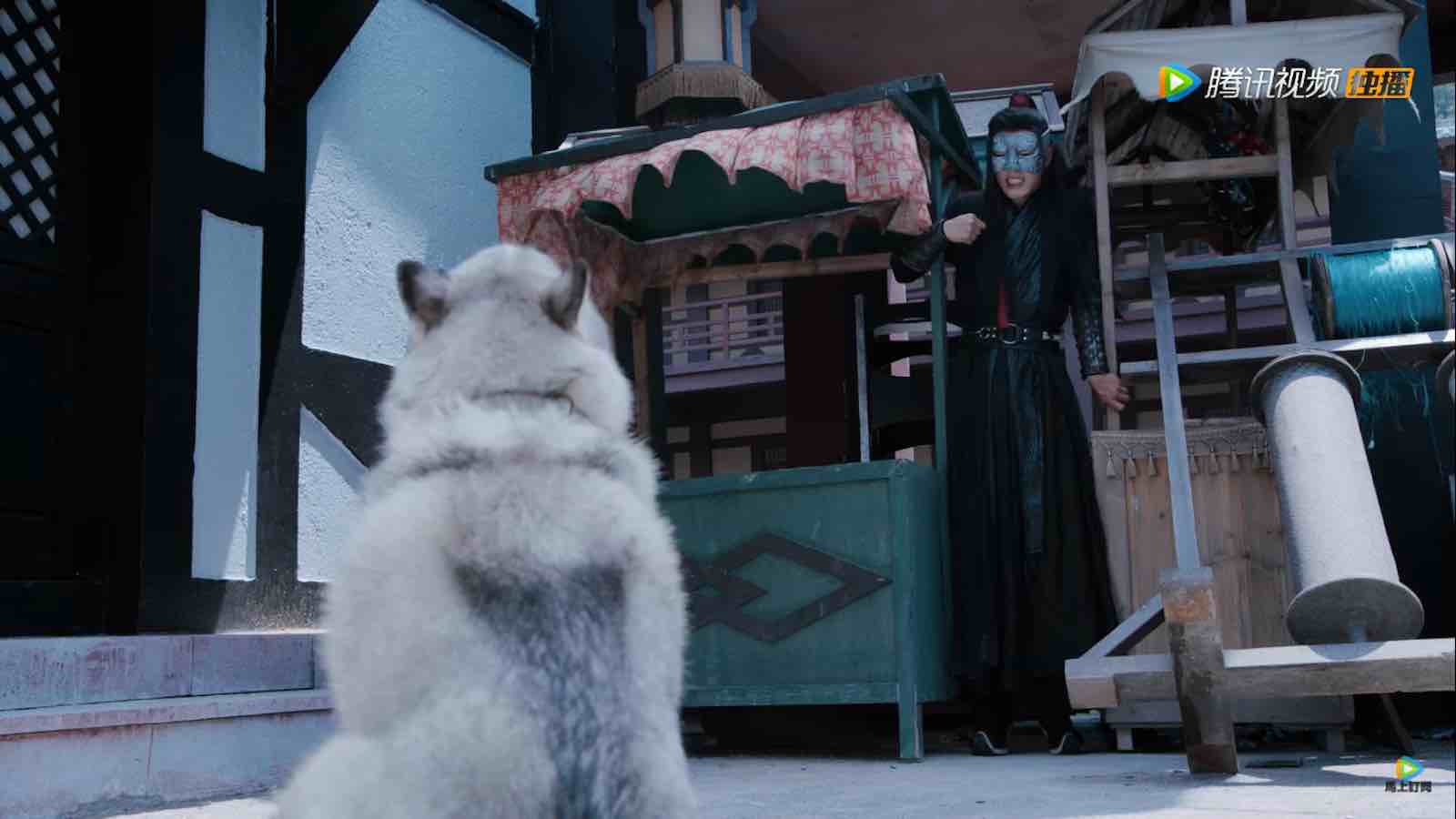 There are several moments throughout the show where Wei Wuxian expresses very clearly that he has a phobia of dogs. We first learn of the extent of his phobia in episode 33. Wei Wuxian is walking through Yiling conversing with various street merchants when he runs into Jin Ling (Qi Pei Xin).

Jin Ling, who at this point thinks Wei Wuxian is actually Mo Xuanyu (Xiao Zhan), calls out for his dog. The dog comes running, which in turn causes Wei Wuxian to run off down the street crying out in terror as the dog chases after him. He tries to hide, but the dog has him cornered.

Wei Wuxian screams out for Lan Wangji to come and save him. Lan Wangji uses some badass magical elevation techniques to swoop in and stands protectively in front of Wei Wuxian, sword drawn. Lan Wangji, one of the most powerful & respected cultivators around, is reduced to protecting his boo from a dog. 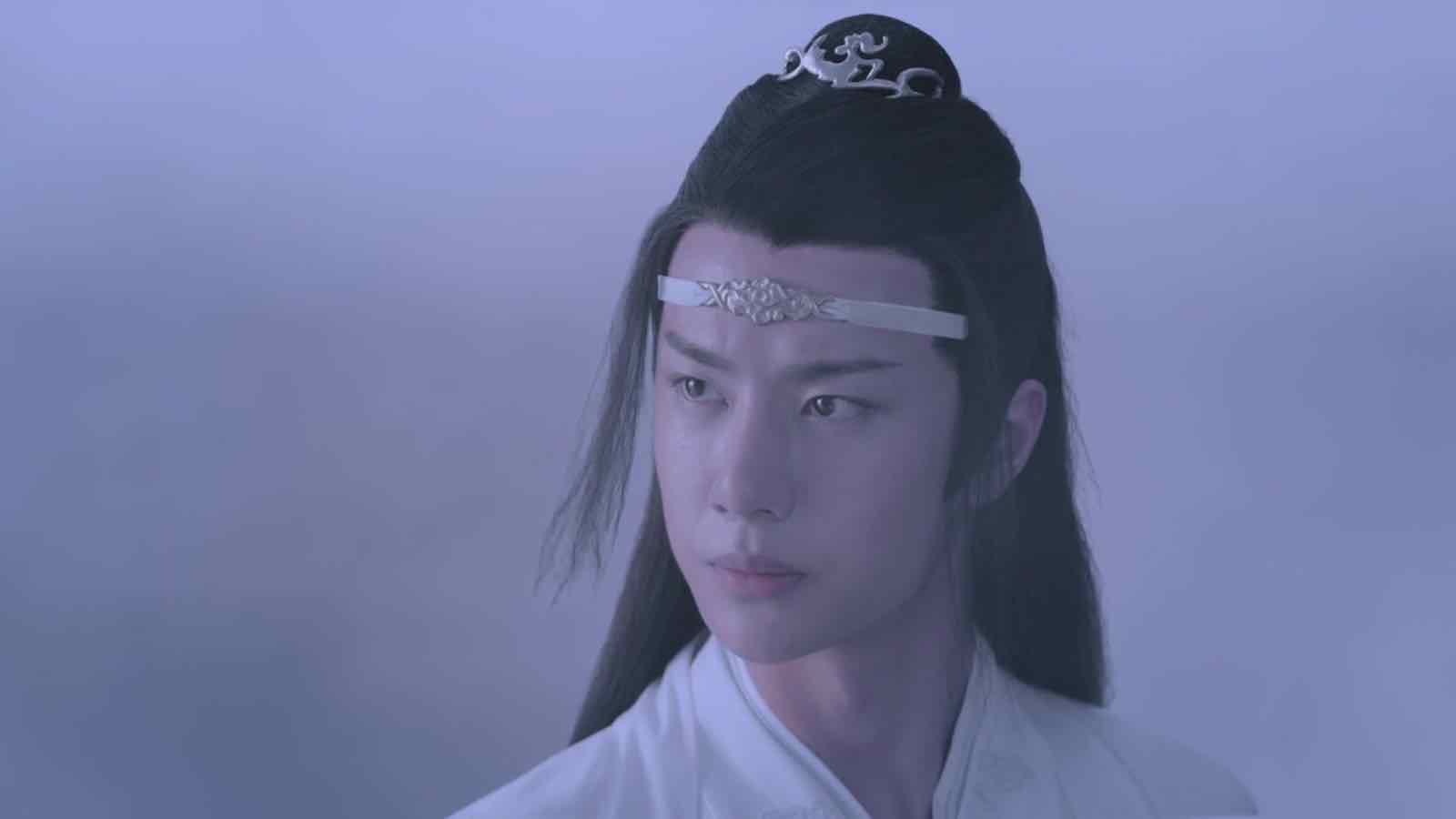 We’d like to point out here that Fairy, the dog, is a beautiful fluffy looking thing that garners quite a charming smile. He is referred to by the other cultivators as a wonder dog. Scary? We think not.

Some time later, Wei Wuxian & Lan Wangji are walking along a deserted road when the sound of a barking dog fills the air from the distance. Wei Wuxian automatically goes back into panic mode, hiding behind and grabbing onto Lan Wangji for protection. It’s not simply the fact that he continuously uses Lan Wangji as his personal shield, but also the expression he wears while doing it. He’s a complete & total baby.

What adds to the sheer comedy of Wei Wuxian’s fear of dogs is Lan Wangji’s unwavering commitment to acting as Wei Wuxian’s human shield. Wei Wuxian is running scared from a dog? Never fear, Lan Wangji is here! It’s these particular moments that earned Wei Wuxian that title of ‘precious babie’ within the fandom. 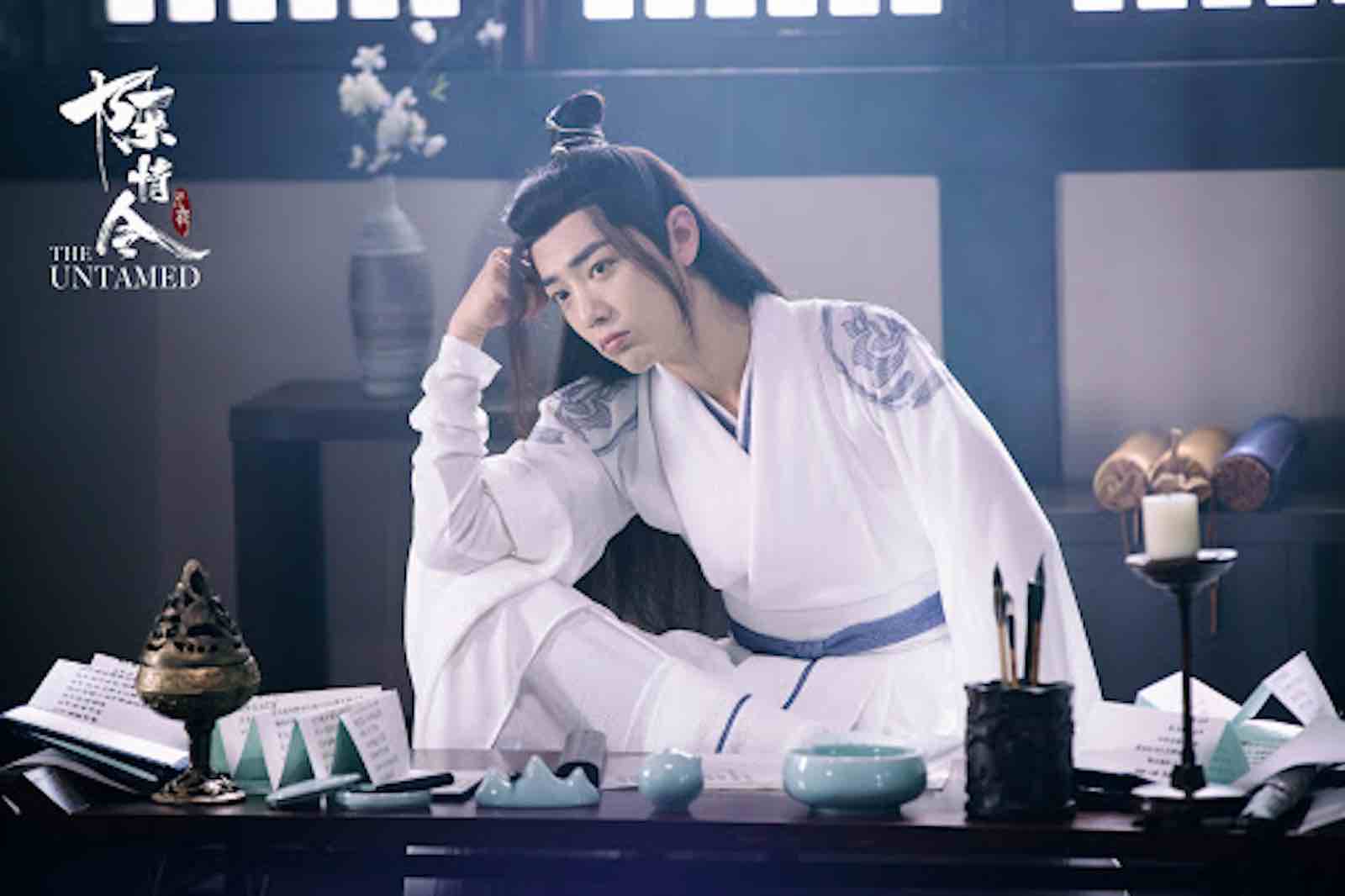 A very pouty & distracted Wei Wuxian can’t take his eyes off Lan Wangji, who is sitting in front of him practicing calligraphy. Wei Wuxian, bored, attempts to engage Lan Wangji in flirtatious conversation, but Lan Wangji remains the picture of perfect stoicism, rebuking his advances.

Wei Wuxian tries apologizing for breaking the rules, but Lan Wangji isn’t convinced of his sincerity and tells him to re-write the text out another time. Wei Wuxian tries again, saying that he really was sincere and that he would even kneel in front of Lan Wangji to prove it. 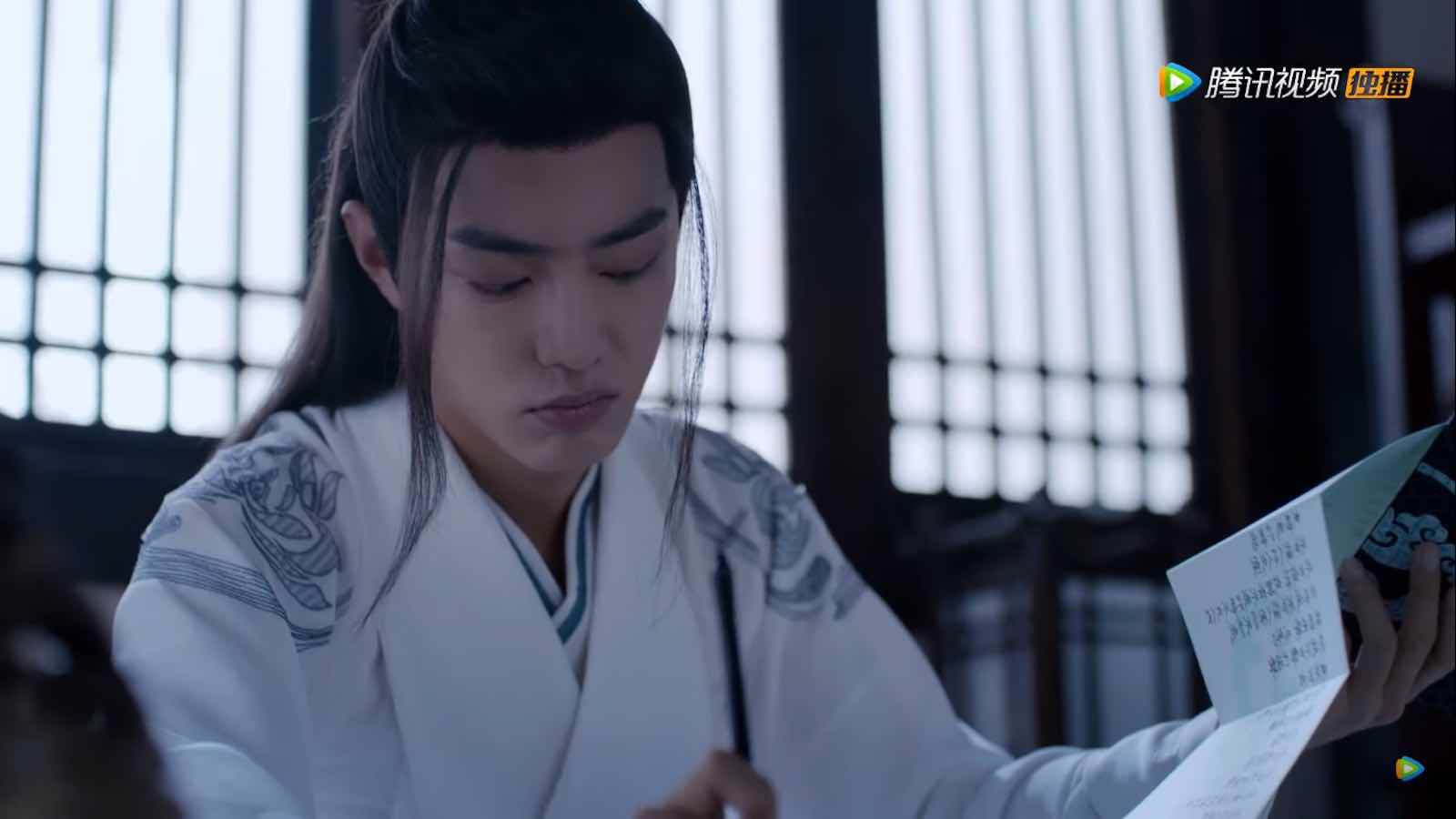 Laughing is inevitable here, as the double meaning of his words is not lost on the audience, or Lan Wangji, and Lan Wangi silences Wei Wuxian using the famous Lan clan silencing spell. Wei Wuxian goes back to what looks like transcribing the text, while Lan Wangji watches over him and reads a book.

However, Wei Wuxian isn’t actually transcribing the text in this moment. He is drawing a picture, which he intends to give to Lan Wangji. The picture is actually of Lan Wangji himself. It’s clearly an act of flirting, and Lan Wangji doesn’t quite know what to make of the whole situation.

Well, Wei Wuxian clears up any ambiguity Lan Wangji might be interpreting quickly here. Lan Wangji opens up a book again, only to find a picture of two men engaged in very explicit sexual acts that just friends don’t do together. Lan Wangji panics, while Wei Wuxian busts out laughing at his reaction. 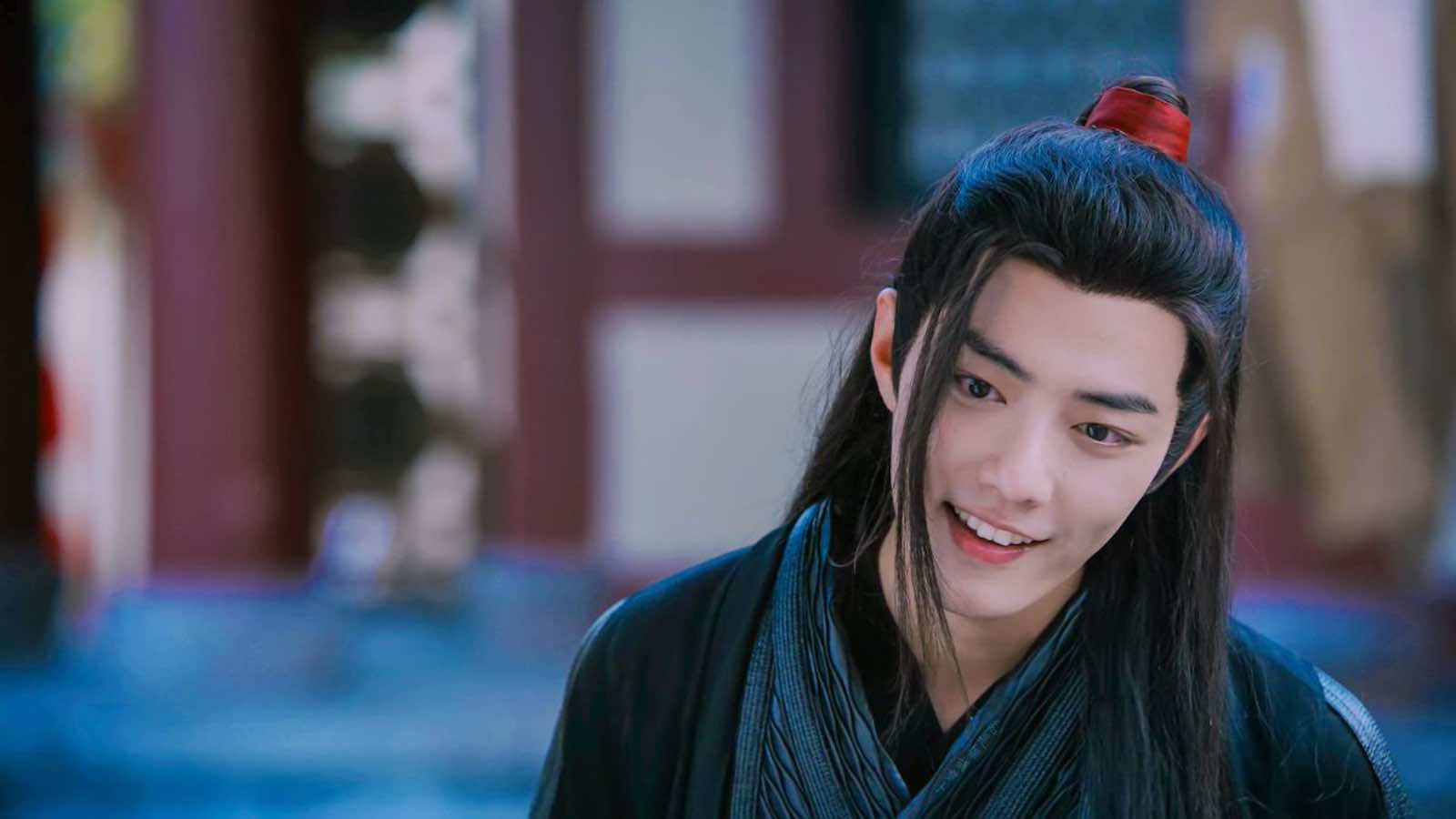 Lan Wangji gets incredibly riled up and reaches for his sword. The whole exchange is funny because Wei Wuxian basically outs himself, and also attempts to out Lan Wangji, claiming that he doesn’t believe that Lan Wangji has never seen pictures of this nature before.

Furthermore, the double meaning behind Lan Wangji grabbing his sword, and Wei Wuxian consequently threatening to do the same can only be interpreted as wildly pent up sexual energy that should have been released in the usual way. Instead, they argue about sword fighting and potentially ruining the Library Pavillion in the process. 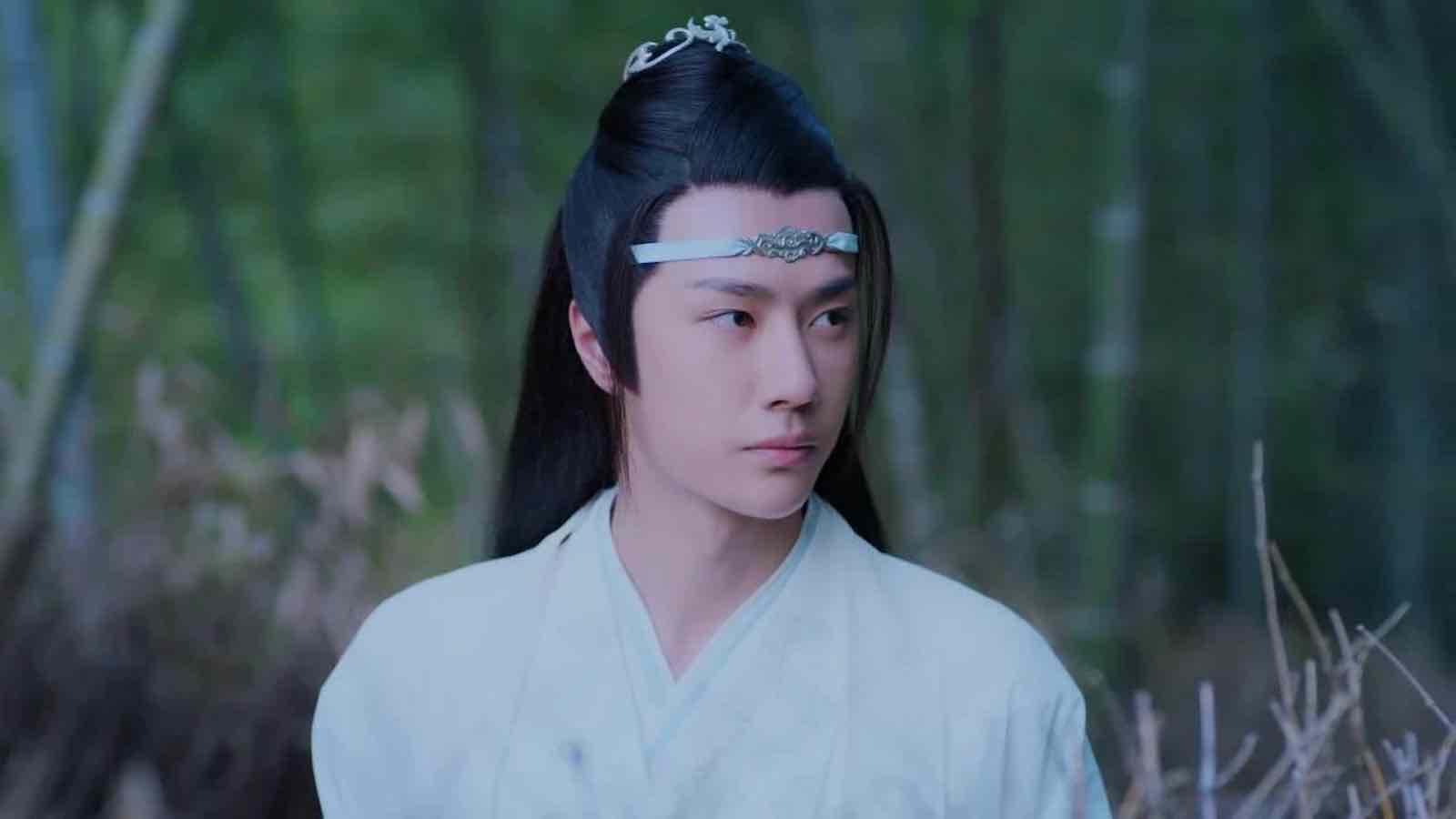 Wei Ying, you talk too much

One of the funniest things about the difference between Lan Wangji & Wei Wuxian’s personalities is their introvert/extrovert dynamic. Where Lan Wangji is quiet, introverted & stoic, Wei Wuxian is extremely extroverted and talks all the time, especially when he is younger.

This difference in their personality clearly annoys Lan Wangji in the beginning. His solution to this problem is to simply force Wei Wuxian to stop talking. He uses the famous Lan clan silencing spell on the chatty fella several times in their teenage years.

First at the gates to Cloud Recesses when the Jiang clan are trying to enter, in the Library Pavillion, as mentioned above, and also while Lan Wangji is dragging Wei Wuxian back to his superiors for further punishment. 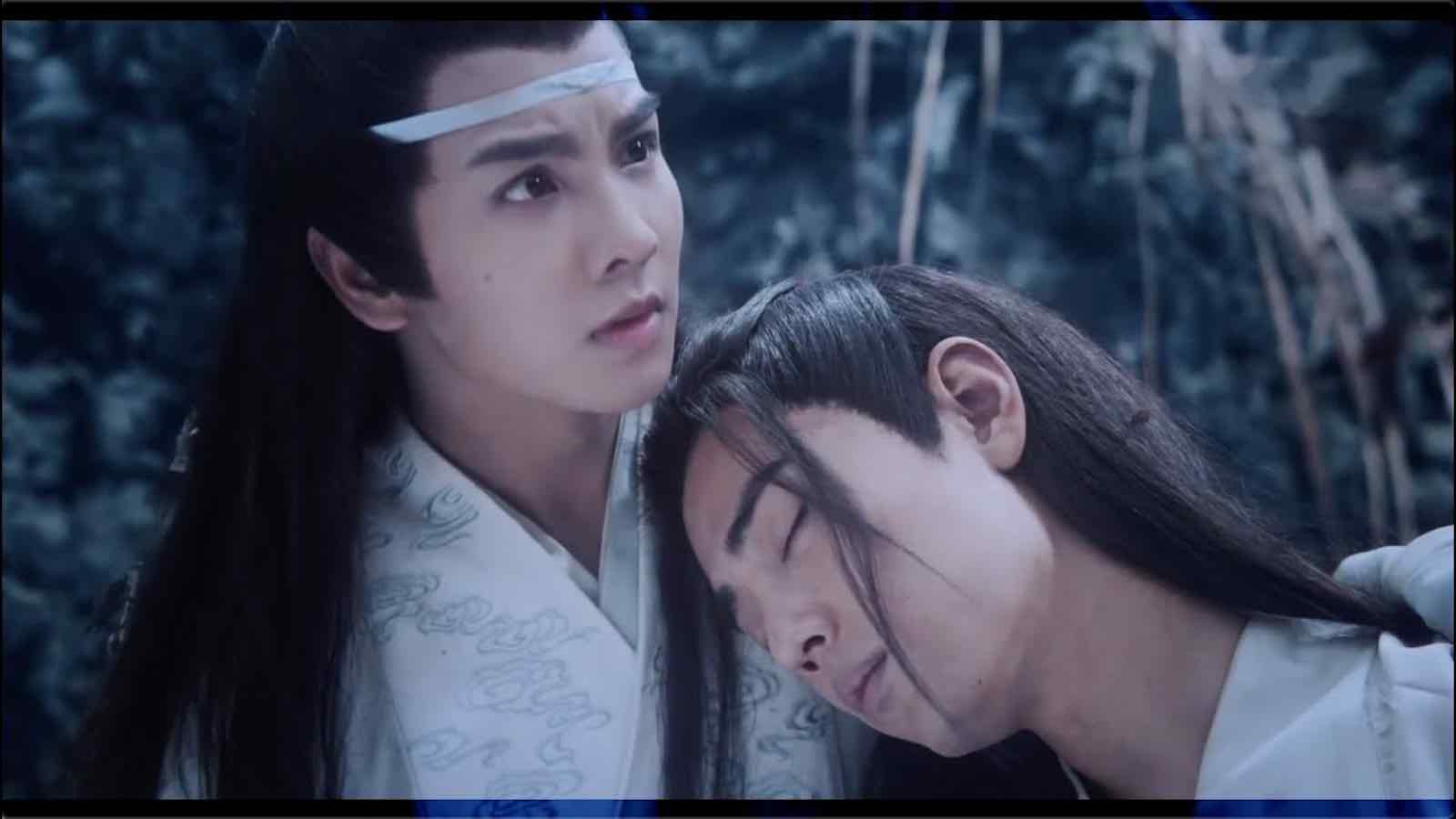 These moments are hysterical for a couple of different reasons. Firstly, it’s clear that Lan Wangji is silencing him because he simply doesn’t like chatty people. However, in several of the moments outlined above, it’s also clear that he uses the silencing spell on Wei Wuxian as a means to deal with his own gay panic.

What takes the hilarity of these moments to a whole other level, is the way Wei Wuxian responds. Every single time, he attempts to fight the spell by moaning against his closed mouth, while physically throwing himself around like a petulant child. The combination of a stoic Lan Wangji & over-exuberant Wei Wuxian in these moments makes one wonder how they ever ended up together in the first place.

The irony of these situations is that, later in the show, Lan Wangji uses the silencing spell on others who are interrupting Wei Wuxian and not letting him speak. Oh, how the tables turn! 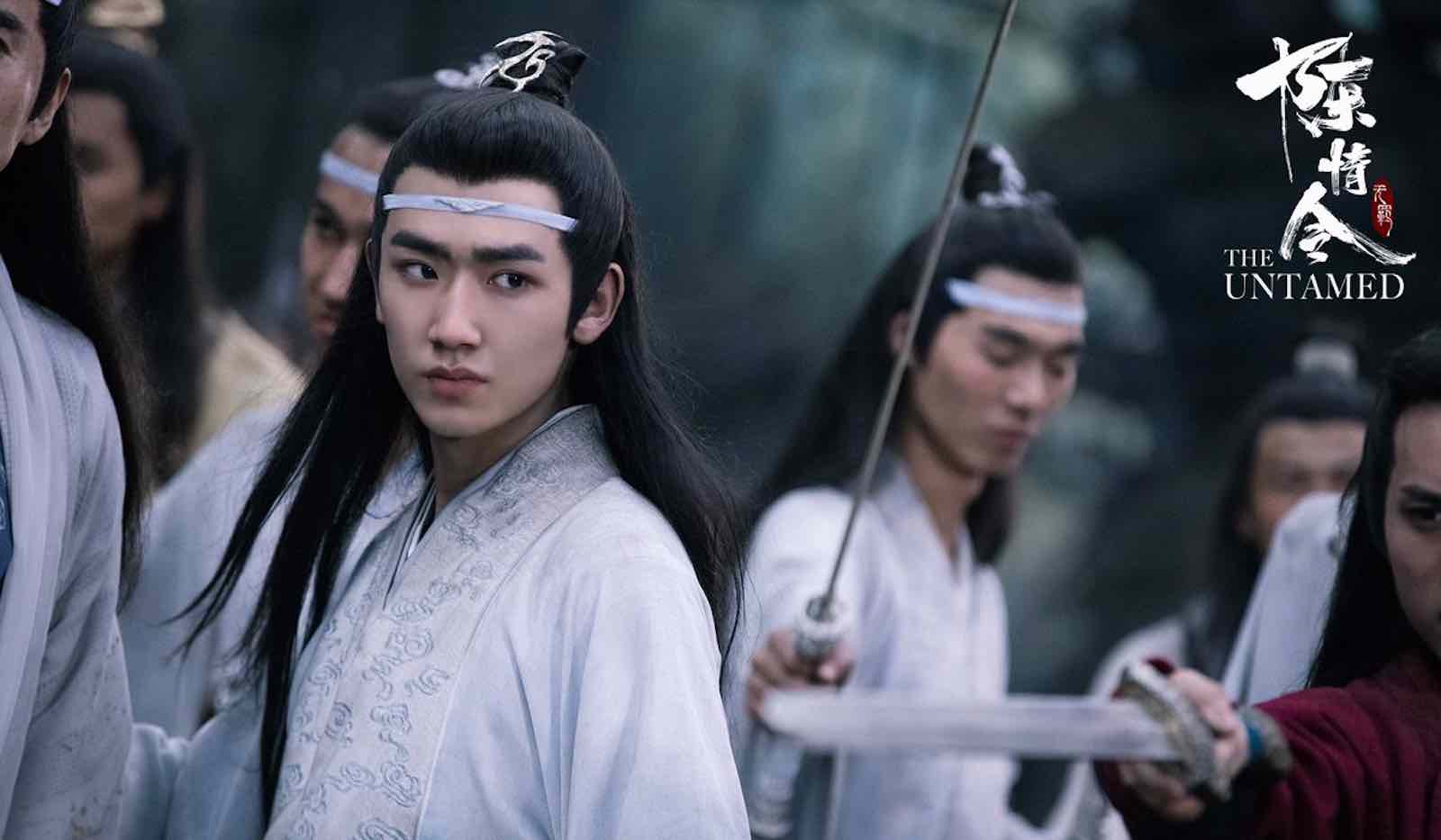 In episode 50, Lan Sizhui (Zheng FanXing) catches up with a departing Wei Wuxian & Lan Wangji. He tells Wei Wuxian that he is, in fact, Wen Yuan from Burial Mounds. The first half of this scene is actually really emotional & we recommend tissues. However, the second half of this scene is rather humorous as elements of Wei Wuxian’s younger, cheeky personality re-emerge.

After the pair get their tears out of the way, Wei Wuxian attempts to save face by injecting his famous playful humor back into the mix. After Lan Wangji proudly announces that Lan Sizhui is in fact a student of both Wei Wuxian & Lan Wangji, Lan Sizhui playfully quips that Wei Wuxian never actually taught him anything. 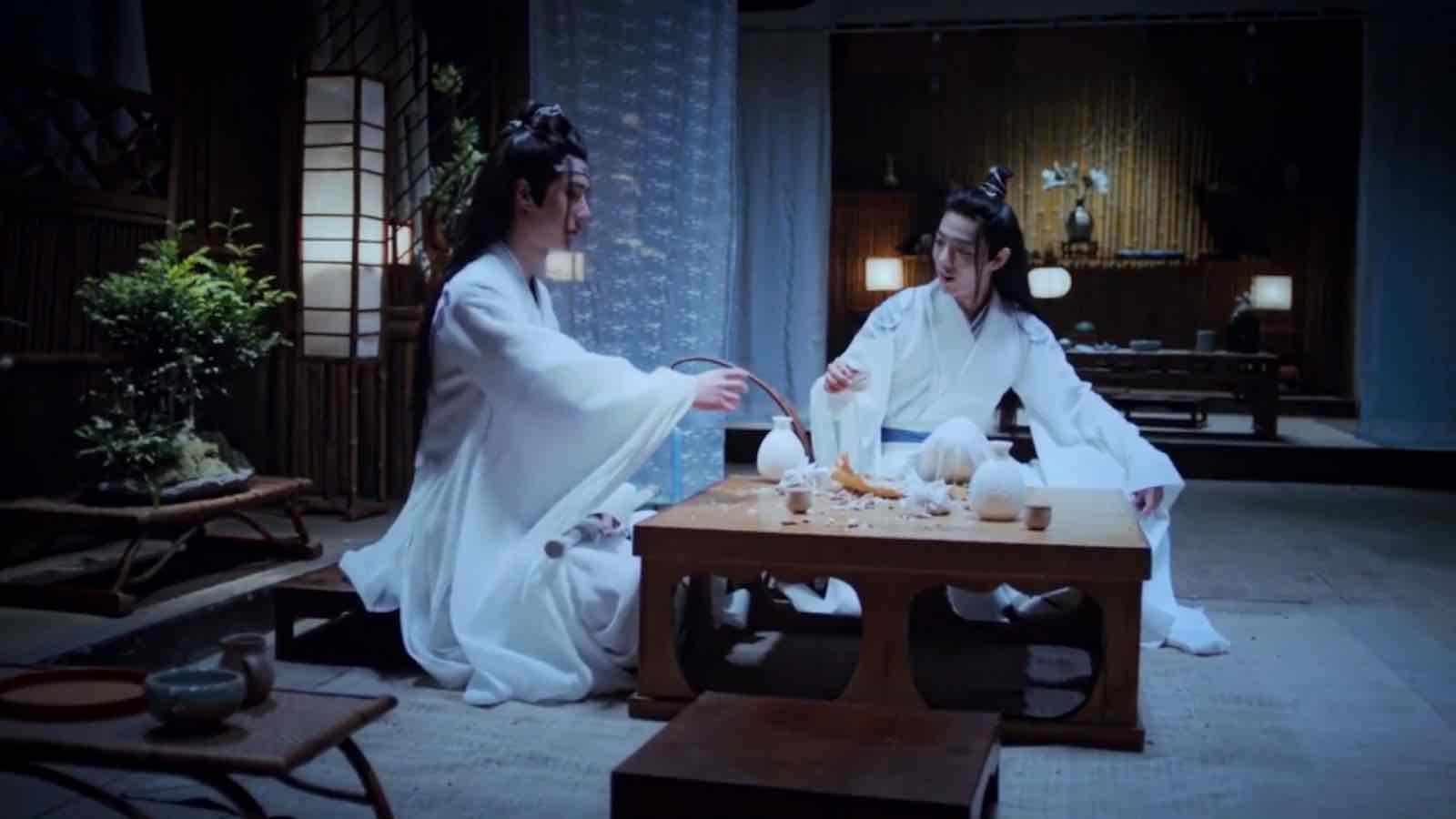 Lan Sizhui & Wei Wuxian end up bantering, only to end up with Lan Sizhui announcing all the improper things Wei Wuxian taught him at Burial Mounds. As Lan Sizhui begins to talk, it’s clear he is about to disclose things of a sexual manner and Wei Wuxian quickly covers his mouth, embarrassed that Lan Sizhui would disclose such things about him in front of Lan Wangji.

It’s funny because it’s true. It’s very easy to imagine Wei Wuxian saying the things Lan Sizhui is accusing him of. Lan Wangji & Wen Ning (Yu Bin) watch on, amused, as the two argue about the accuracy of Lan Suizhui’s words. Wei Wuxian’s desperate attempts to claim innocence is hilarious it juxtaposes his mischievous side with the part of him that really is the purest of pure souls.

This scene is one where you’ll both laugh & cry, so be ready! 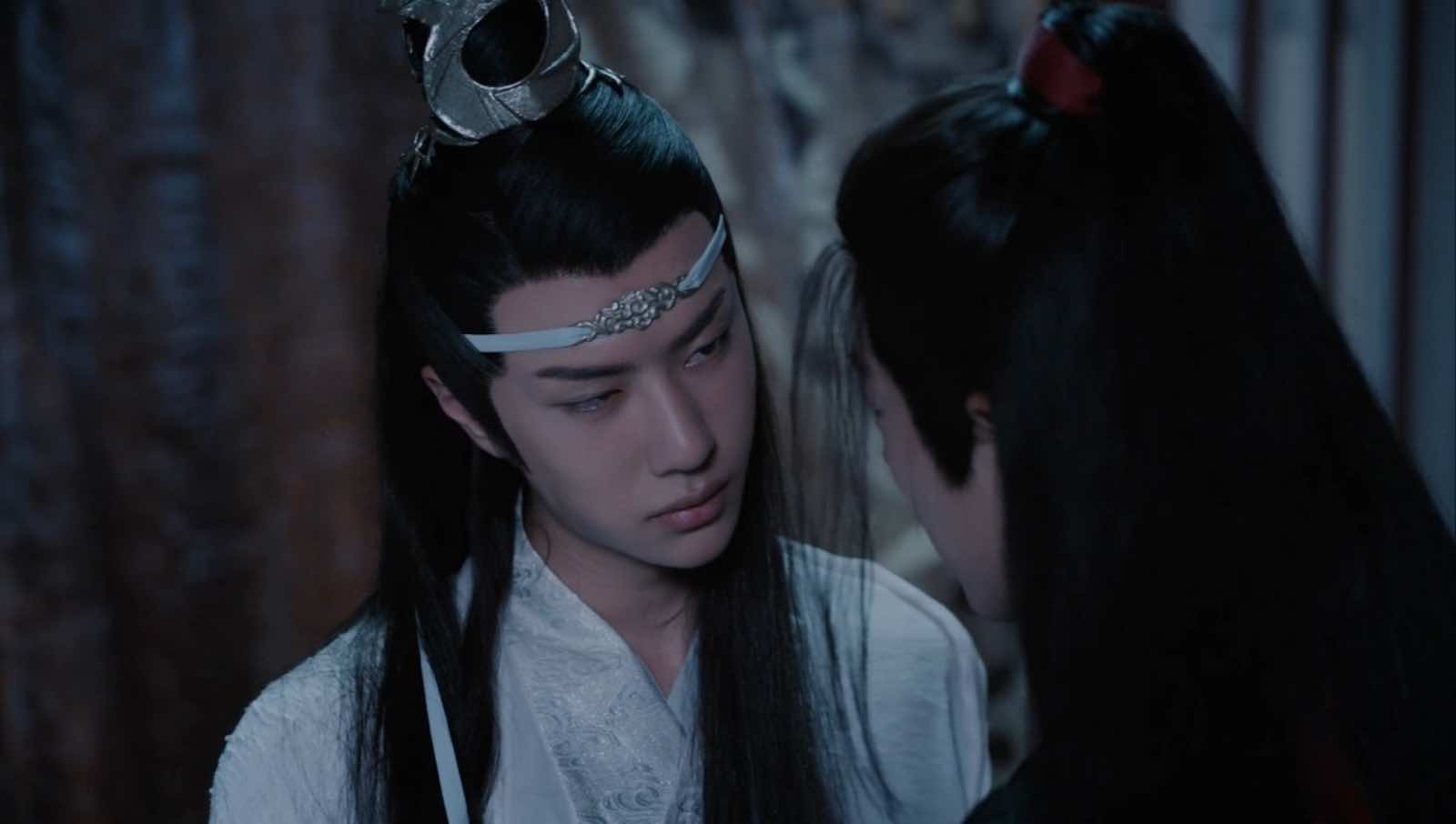 The first is when Lan Wangji walks into the room and catches the boys in the act. The funny part about this scene though, isn’t the fact that they get caught. It’s what they’re doing, and Lan Wangji’s reaction to their behavior that is laugh-inducing. 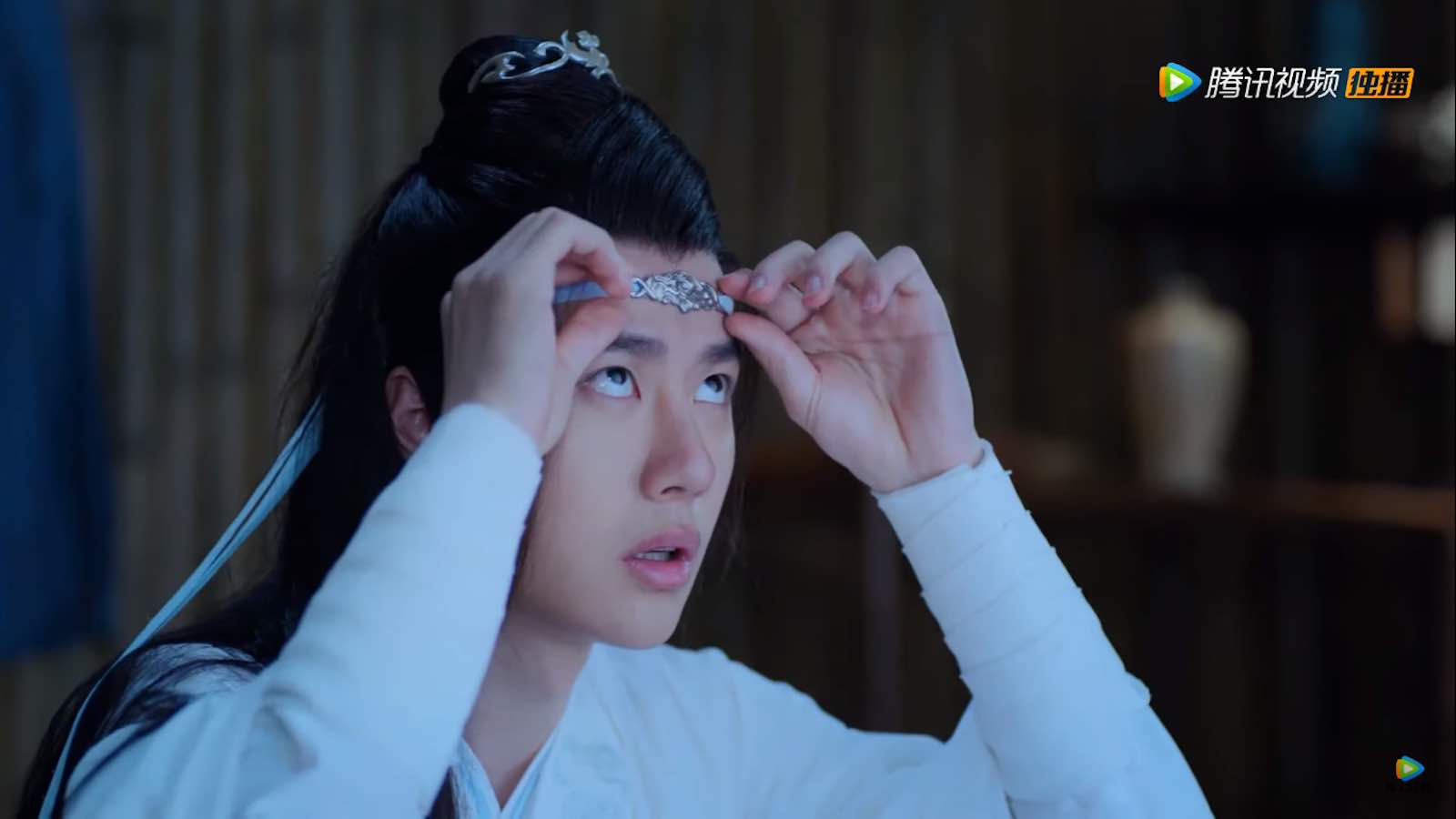 Lan Wangji walks in completely scandalized by the scene unfolding in front of him. The boys attempt to collect themselves quickly, but there’s no hiding what is happening. They are drunk drunk drunk. It could be argued here that Lan Wangji is scandalized by their drunkenness, as it’s against the rules to bring liquor into Cloud Recesses.

However, there is another interpretation folks have entertained: Lan Wangji is jealous. His reaction to the trio, as well as Wei Wuxian’s attempts to bait Wangji into the fold, is nothing short of delightful. Jiang Cheng & Nie Huai Sang run past Lan Wangji to vomit outside. 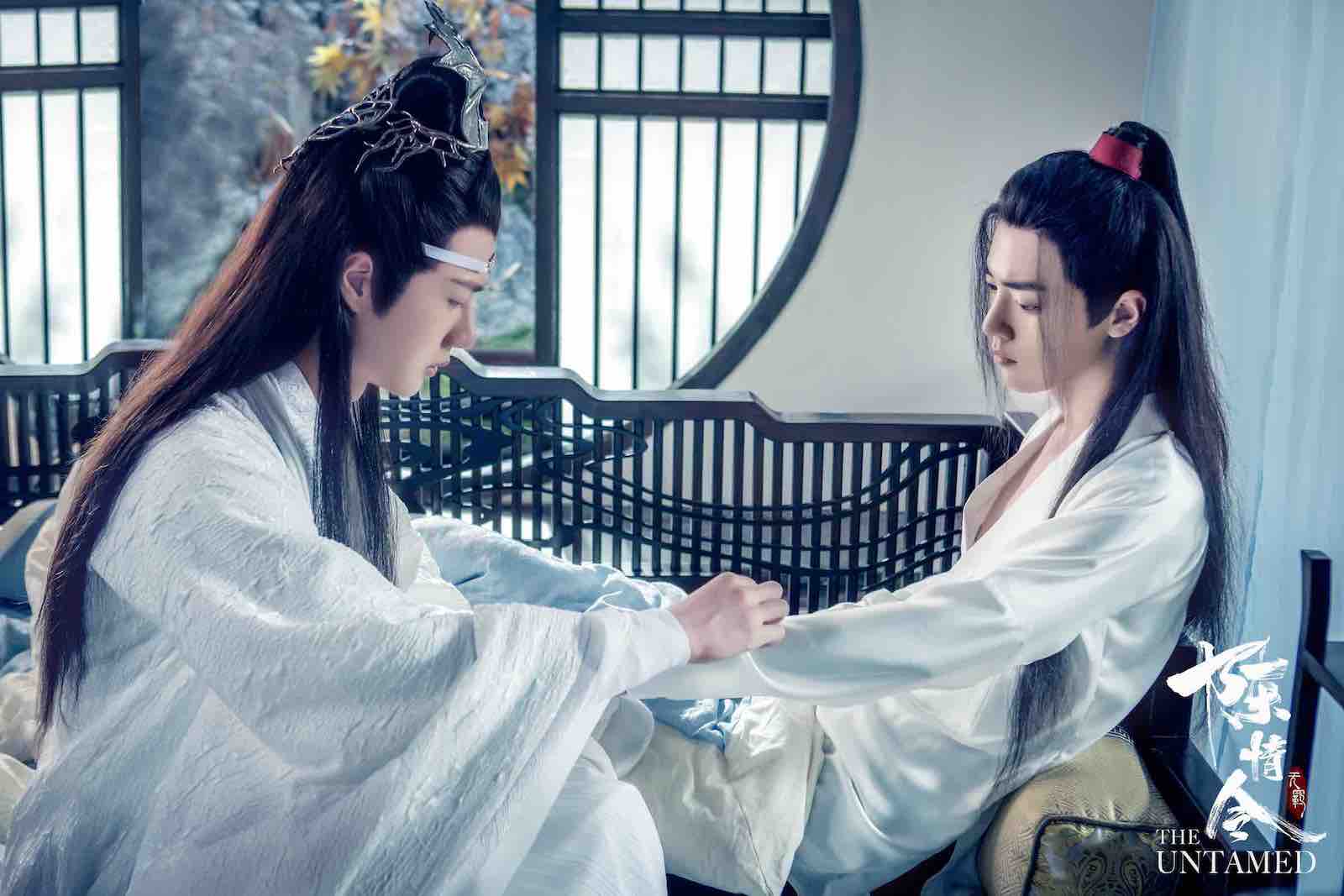 Drunk Lan Wangji & Wei Wuxian’s utter delight in watching Lan Wangji be drunk is nothing short of pure comedy. This dynamic plays out a couple of times throughout the series, and we never get tired of it.