The creators of the show used many different symbols & tricks to convey the boys’ love for each other. Throughout the show, Lan Wangji does many things for Wei Wuxian & gives him many things that show how much he loves him in the absence of words and physical contact. Come with us as we journey through these heartwarming moments. 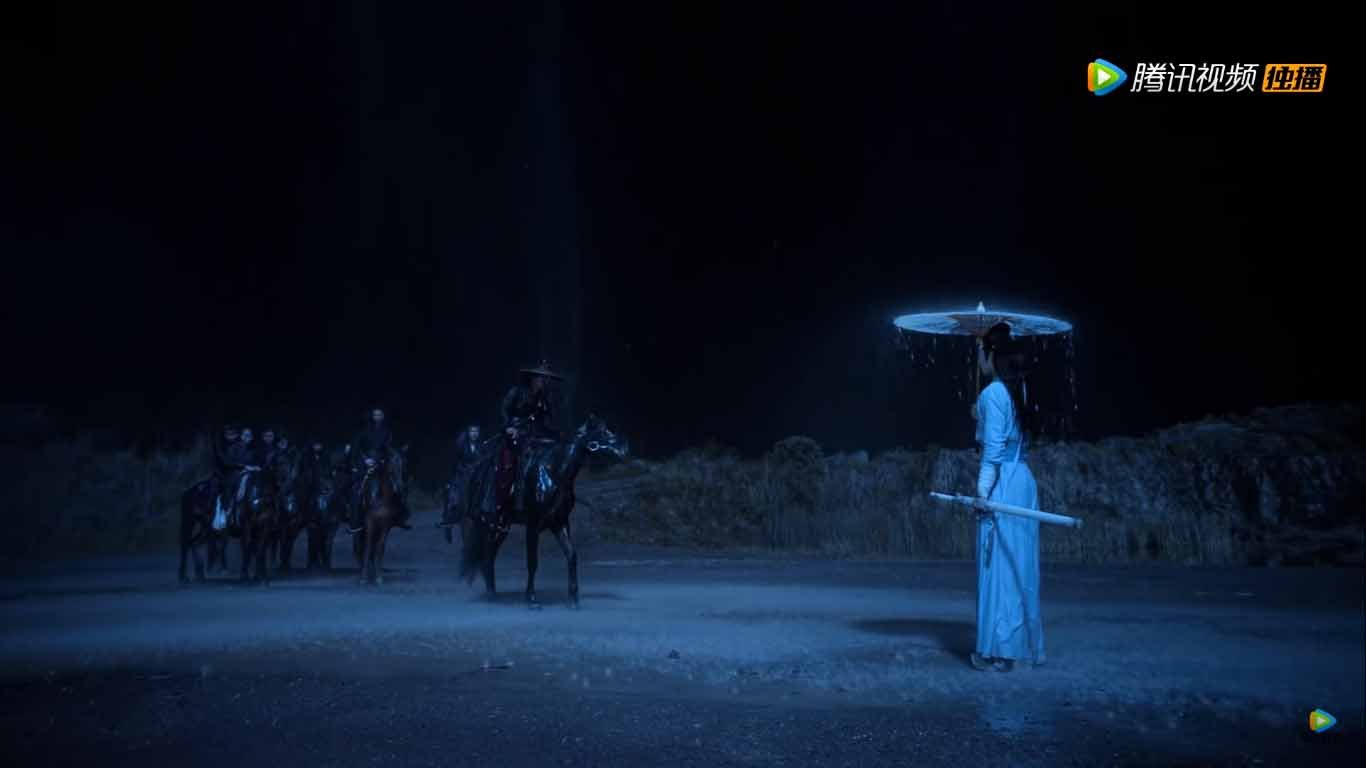 The freedom to leave

In ep.26, Lan Wangji sets off to find Wei Wuxian hoping to steer from his path of demonic cultivation & set him back on the path of goodness. At the end of this episode, Wei Wuxian & Lan Wangji face off in a moment of sheer devastating heartbreak. Lan Wangji finds Wei Wuxian with members of the exiled Wen clan, on their way to find safety & refuge.

Lan Wangji reminds Wei Wuxian, that if he defects now, he won’t ever be able to come back & will be outcast forever. Wei Wuxian challenges Lan Wangji to really consider who is right & wrong in this situation. Clearly, Wei Wuxian thinks saving Wen Ning (Yu Bin) and the others is the right thing to do.

As ep.27 starts, the air is tense between the two men, all their unspoken feelings for each other radiating off their bodies. Wei Wuxian tells Lan Wangji that if he must face his fate, and eventually fight the cultivators, he prefers that he face off With Lan Wangji. If Wei Wuxian must face death, he wants it to be at the hands of Lan Wangji – his soulmate. 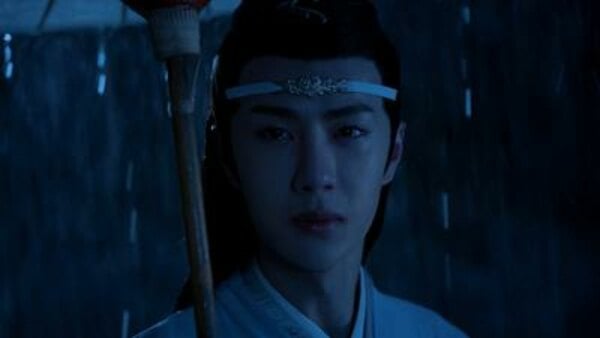 Arguably one of the saddest moments in the entire show, Lan Wangji knows killing Wei Wuxian is not possible for him, even though the other cultivators probably expected him to do so if he was unsuccessful in bringing him back. Lan Wangji’s unspoken love for Wei Wuxian is written all over his face in this scene as he steps aside, silently granting Wei Wuxian & his companions the freedom to leave unharmed.

As Wei Wuxian & his group ride away in the rain, Lan Wangji stands there as a tear falls down his face, absolutely devastated by his departure. He lowers his umbrella, closes his eyes & tilts his head up into the rain. Finally, Lan Wangji understands the depth of his feelings for the man riding off in the rain, and it breaks him. As far as Lan Wangji knows, this could be the last time he ever sees the man he loves.

In ep.28 Wei Wuxian & A-Yuan (Huang Zhen Cheng) head into Yiling to get supplies for their commune at the Burial Mounds. Lan Wangji just happens to be in Yiling on a nighthunt. In one of the greatest coincidences known to mankind, Lan Wangji happens to run into the pair. A-Yuan wanders away from Wei Wuxian, stumbling across Lan Wangji & attaches him to his leg, crying.

The townsfolk gather around Lan Wangji, who has no idea who the child is, or what to do about his crying. Wei Wuxian looks on fondly from afar. He lets the scene play out for just a few short moments before he calls for Lan Wangji’s attention. When Lan Wangji locks eyes with Wei Wuxian, emotion spills from his eyes. 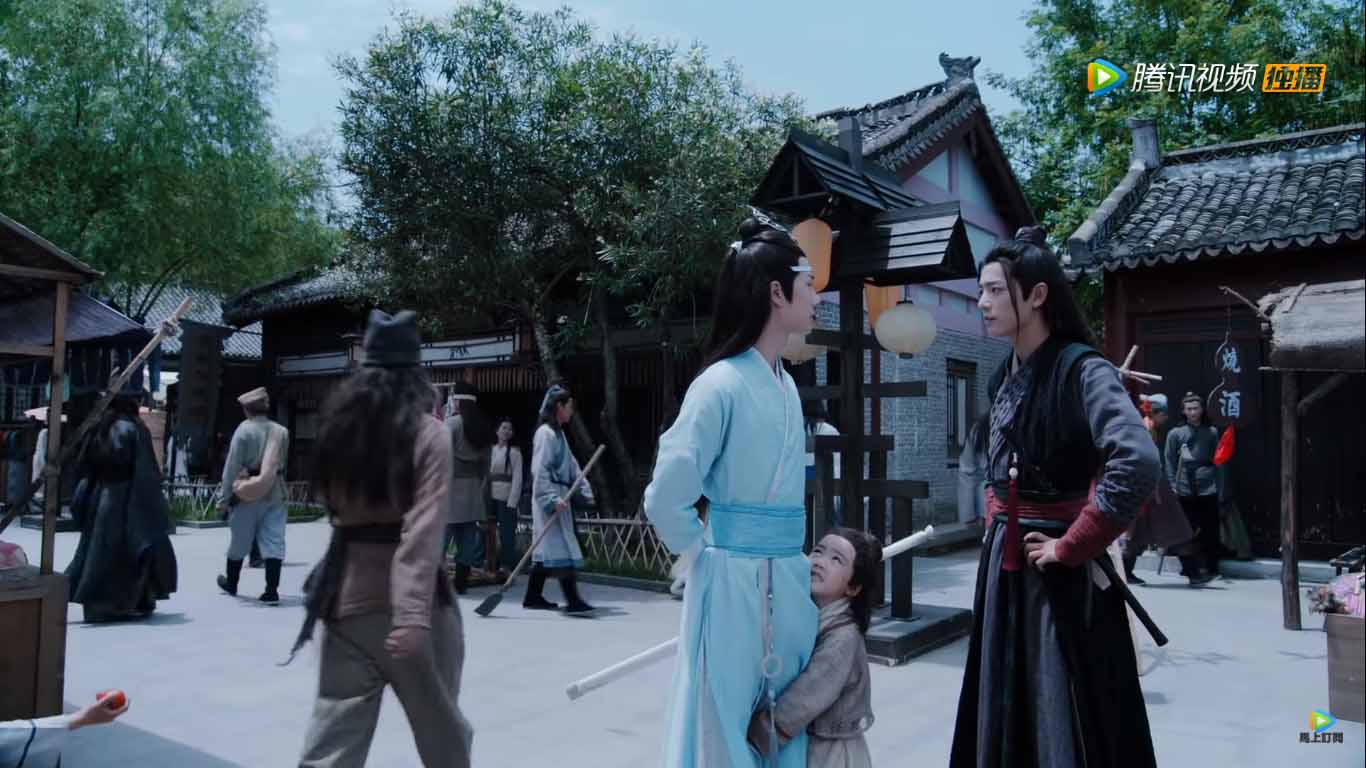 Wei Wuxian proceeds to tell Lan Wangji that A-Yuan is his child. The audience knows that Wei Wuxian considers A-Yuan his responsibility, but the look of total shock that washes over Lan Wangji’s face suggests that he doesn’t understand this. This also alludes to a passage of time between ep.27 when the pair last saw each other, and this moment in ep.28.

As Lan Wangji watches Wei Wuxian interact lovingly with A-Yuan, a softness washes over his face. It becomes clear that Wei Wuxian cannot afford to buy the toys from the stall that A-Yuan is playing with, so Lan Wangji ends up buying it for him. Little does he know that this is the first of many things that Lan Wangji does for A-Yuan & that he would soon become Lan Wangji’s own son. 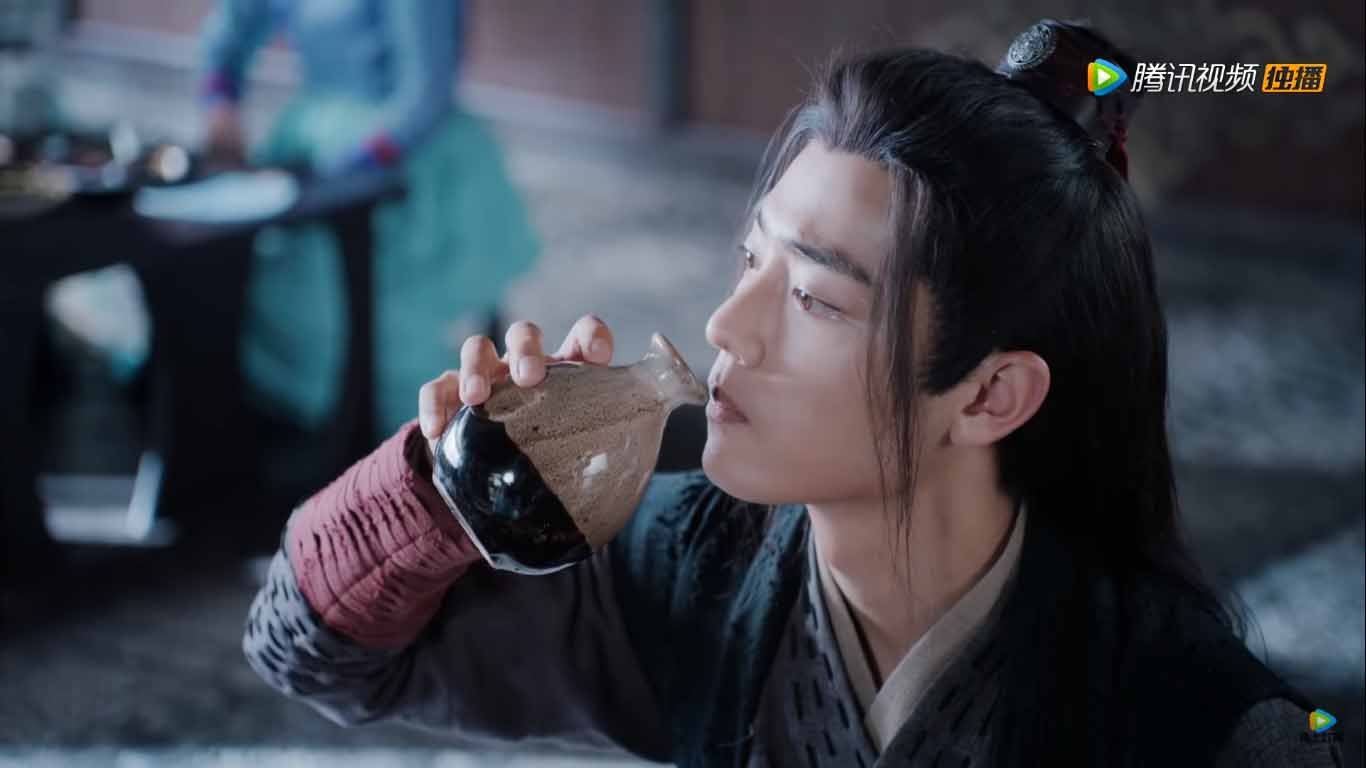 In the same episode, Wei Wuxian suggests that the three of them sit down and have a meal for old time’s sake. Initially Wei Wuxian offers to pay, but considering he couldn’t even buy A-Yuan the toys he wanted, the audience clearly understands that this isn’t really a possibility. Lan Wangji agrees, clearly wanting to spend as much time with the man as possible.

The dinner date starts at the beginning of ep.29 & goes exactly as one would expect it to. They order food and engage in small talk, as it seems Lan Wangji is still not capable of anything further at this point. Unspoken awkwardness surfaces between the two men as they seem to be caught up in their own feelings as dinner begins, while A-Yuan flutters around Lan Wangji, clearly taken with the man.

A-Yuan ends up plonking himself down on Lan Wangji’s lap, who seems to enjoy the child’s affection. The whole scene is dripping in paternal cuteness as the three of them exude family vibes. Wei Wuxian finally realizes that Lan Wangji isn’t in Yiling by mistake & the man is actually there looking for him. Soon after, they are interrupted by a talisman message & the three of them rush off to Burial Mounds. 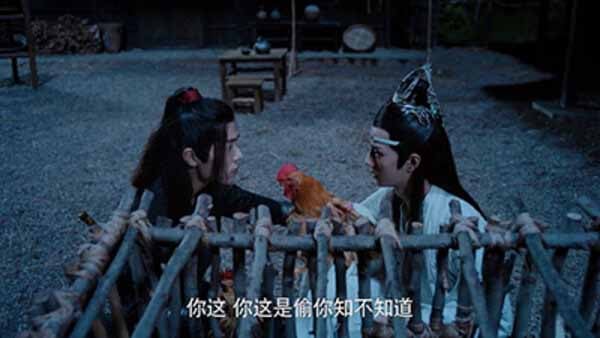 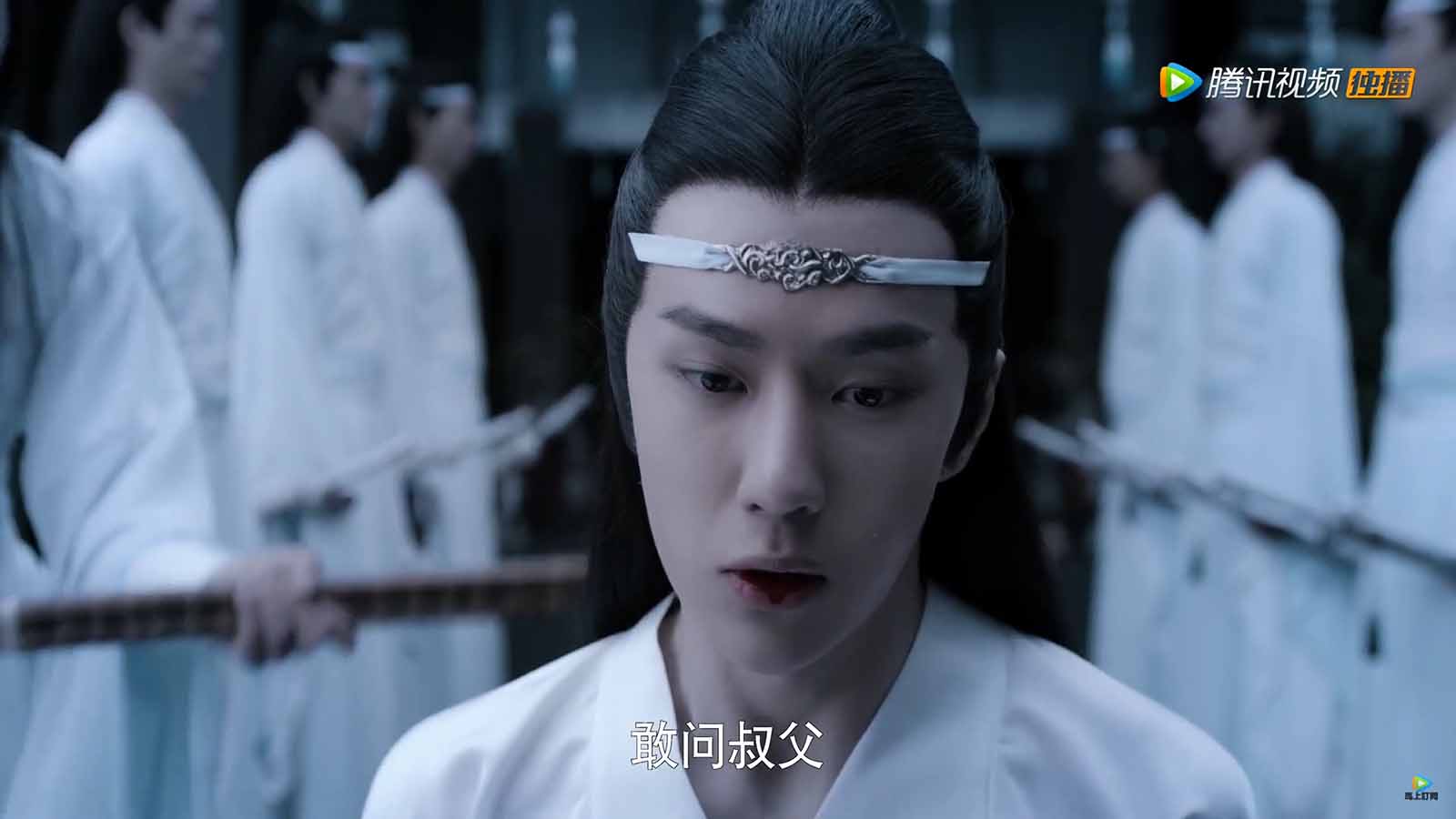 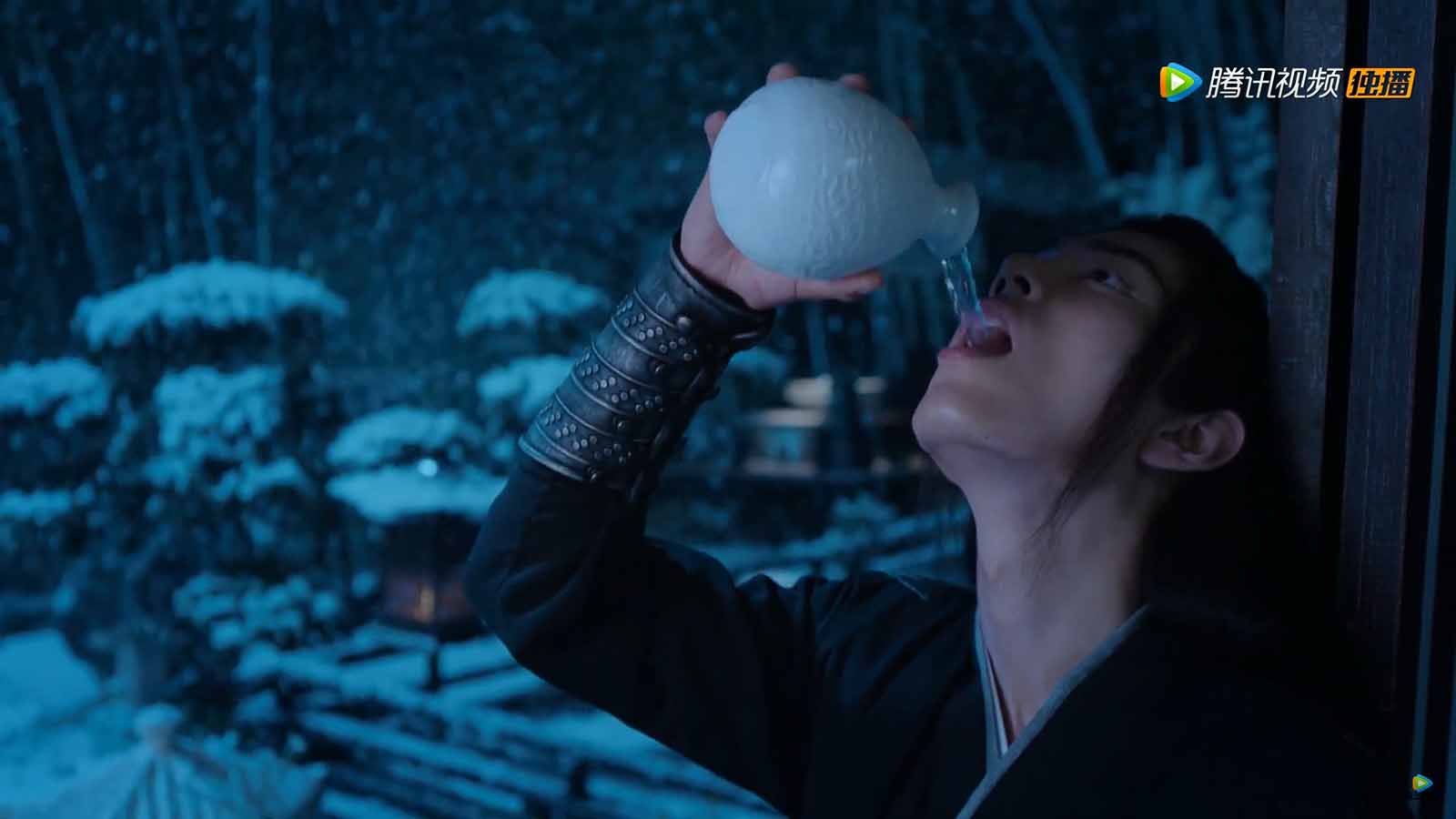 In ep.43, Wei Wuxian finds himself alone with Lan XiChen (Liu HaiKuan), Lan Wangji’s brother. He capitalizes on this moment and uses this time to ask questions about Lan Wangji’s scars. Lan XiChen recounts the story of how Lan Wangji defended Wei Wuxian’s honor, and the subsequent punishment that followed.

In this moment, Lan Xichen also tells Wei Wuxian the story of his and Lan Wangji’s parents’ marriage, trying to demonstrate the parallels between their relationship & the one that Wei Wuxian has with Lan Wangji. It is here that Lan Xichen spells out in very clear terms that Lan Wangji loves Wei Wuxian desperately & really does consider Wei Wuxian his soulmate. 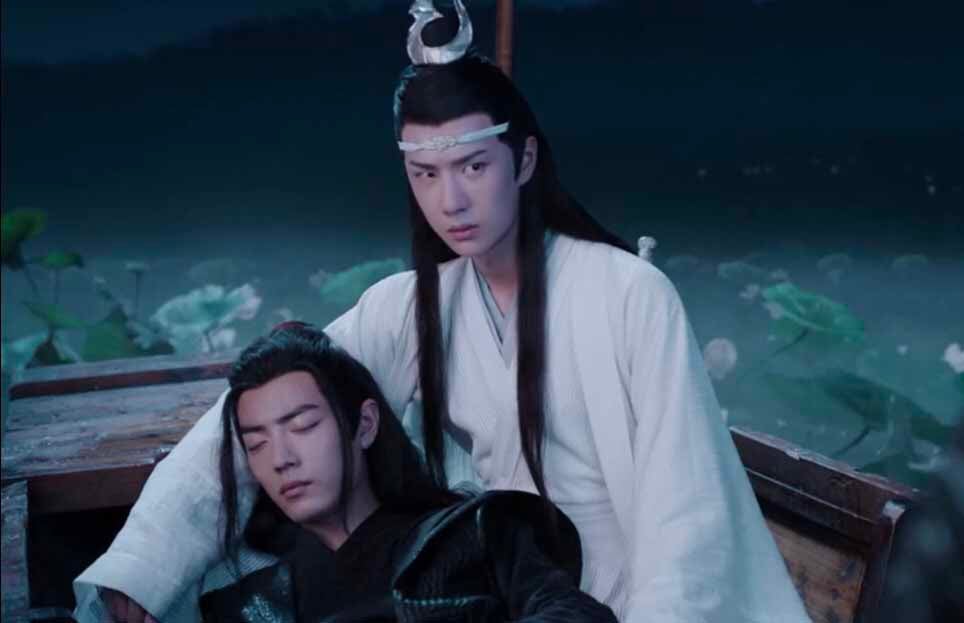 As Wei Wuxian is standing there, completely overcome with emotion as he processes this information, Lan Wangji emerges at the gate, arriving home, holding two pots of Emperor’s Smile for Wei Wuxian. This moment serves as a point of reinforcement of Lan Xichen’s words to Wei Wuxian, as alcohol is strictly forbidden in Cloud Recesses.

This scene serves to prove to the audience, in case they didn’t already get it, and to Wei Wuxian, that what Lan Xichen said to Wei Wuxian moments ago is very much true. Lan Wangji loves Wei Wuxian so much that he is willing to break the rules for his man, even in front of the clan leader. 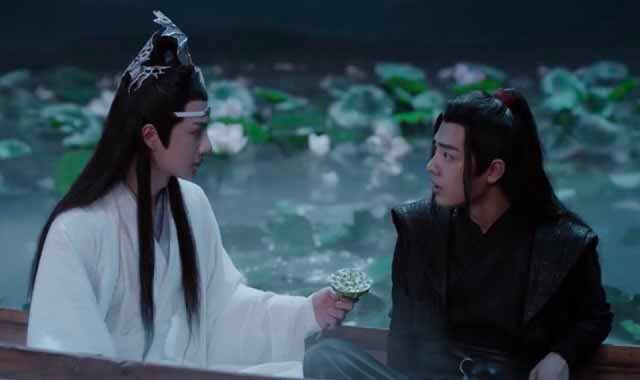 In episode 46 Lan Wangji, Wei Wuxian & Wen Ning find themselves in a boat as they attempt to vacate Lotus Pier. Prior to getting in the boat, Wei Wuxian has quite the confrontation with his brother, Jiang Cheng (Wang Zhuocheng), and ends up passing out. While Wei Wuxian is passed out, Lan Wangji listens to Wen Ning as he recounts the story of how Wei Wuxian gave his golden core to Jiang Cheng, without anyone knowing.

The golden core is of the utmost importance to cultivators, as this is what allows them to fight at peak supernatural ability. Without it, they’re simply “normal”, lacking the notoriety & respect that being born a cultivator comes with. Devastated by the tale, Lan Wangji picks up Wei Wuxian and leaves Lotus Pier at once.

In the boat, as Wei Wuxian wakes up, the pair engage in conversation for a while before Wei Wuxian turns around and plucks three lotus flowers from the water. He hands one off to Lan Wangji & then one off to Wen Ning. Lan Wangji looks at the flower carefully. He asks Wei Wuxian if anyone owns the lake. The implication here is that picking the flowers is an act of stealing. 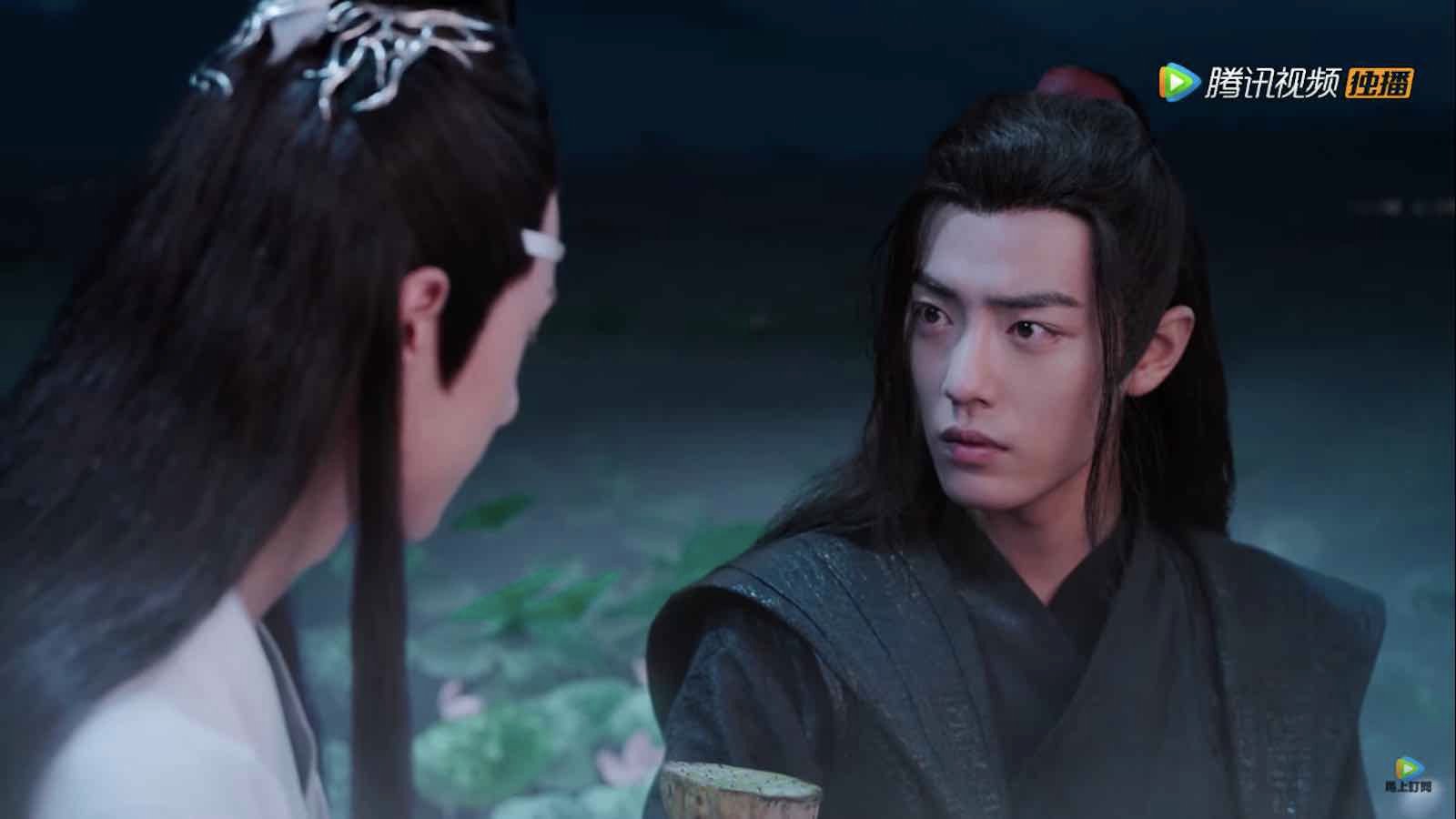 Dismay washes over Wei Wuxian’s face. After learning the truth behind Wei Wuxian’s downfall prior to getting in the boat, Lan Wangji’s face softens & he turns to the water, plucking out a lotus flower, handing it to Wei Wuxian in an offering of love. Wei Wuxian seems surprised that Lan Wanji is breaking the rules for him again, but he takes the flower anyway.

The three sit in the boat, continuously plucking flowers from the water, munching on the seeds. Soon enough, the bottom of the boat is full of empty lotus pods.

There were many other gifts & experiences that Lan Wangji gave to Wei Wuxian in the novel that didn’t make it into the show due to censorship reasons. If you’re interested in reading all about those moments, you can find the English translation of the novel here.

If you’re obsessed with The Untamed, sign up for our newsletter. We promise to only send you the most relevant content to your inbox.