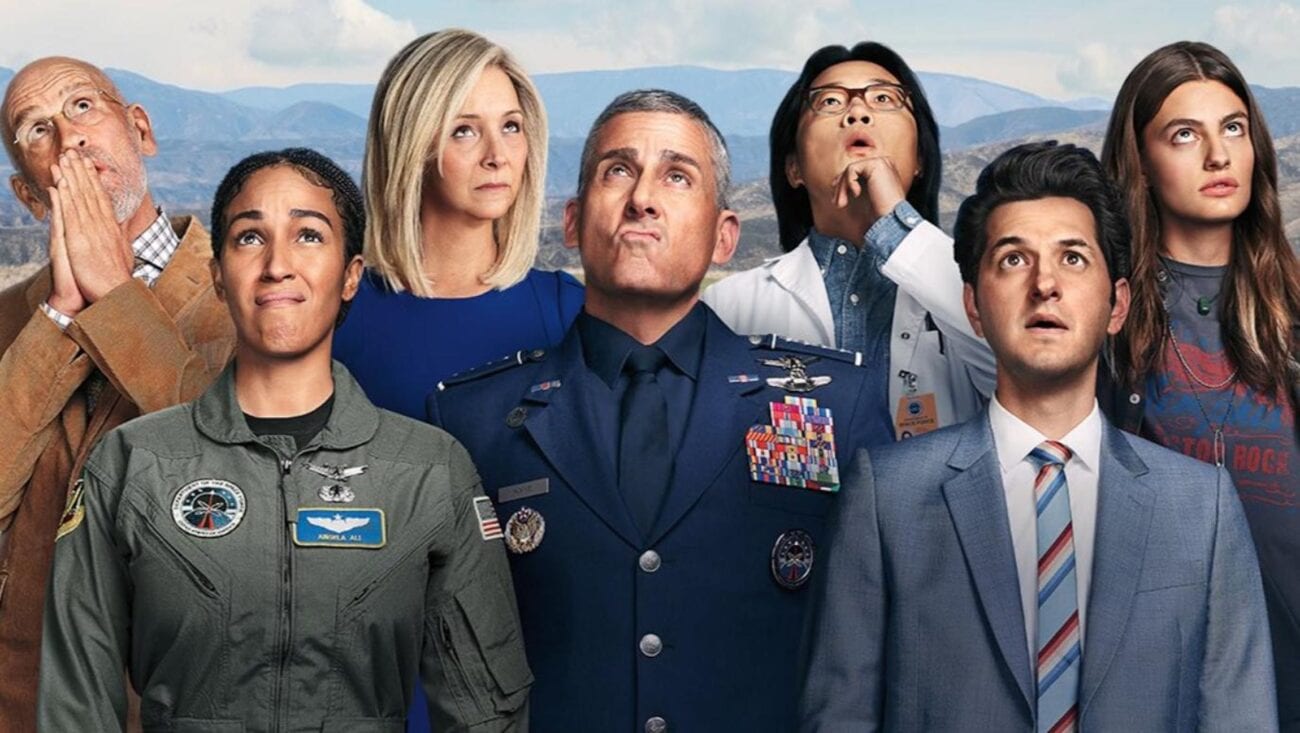 When we heard the announcement for Netflix’s Space Force we were so excited. Genuinely laughing out loud merely at the anticipation of the potential hilarity Steve Carell was going to present us with this new type of workplace sitcom.

Now, we know we just called Space Force “hot trash”, but it was only hot trash when you’re expecting a sitcom or a similar tone to The Office, which is exactly what everyone was expecting. Not only is The Office a pop culture staple which made Carell a household name, but the trailer made the show look like nonstop hilarity and ridiculous hijinks.

Alas, the show wasn’t what people felt like they had been advertised which is always an upsetting experience and it can be hard to like a show or movie for what it really is when that happens. Expectations can truly taint an experience. So, here are the problems with the show and what they did well – in no particular order, Netflix we hope you’re taking notes. 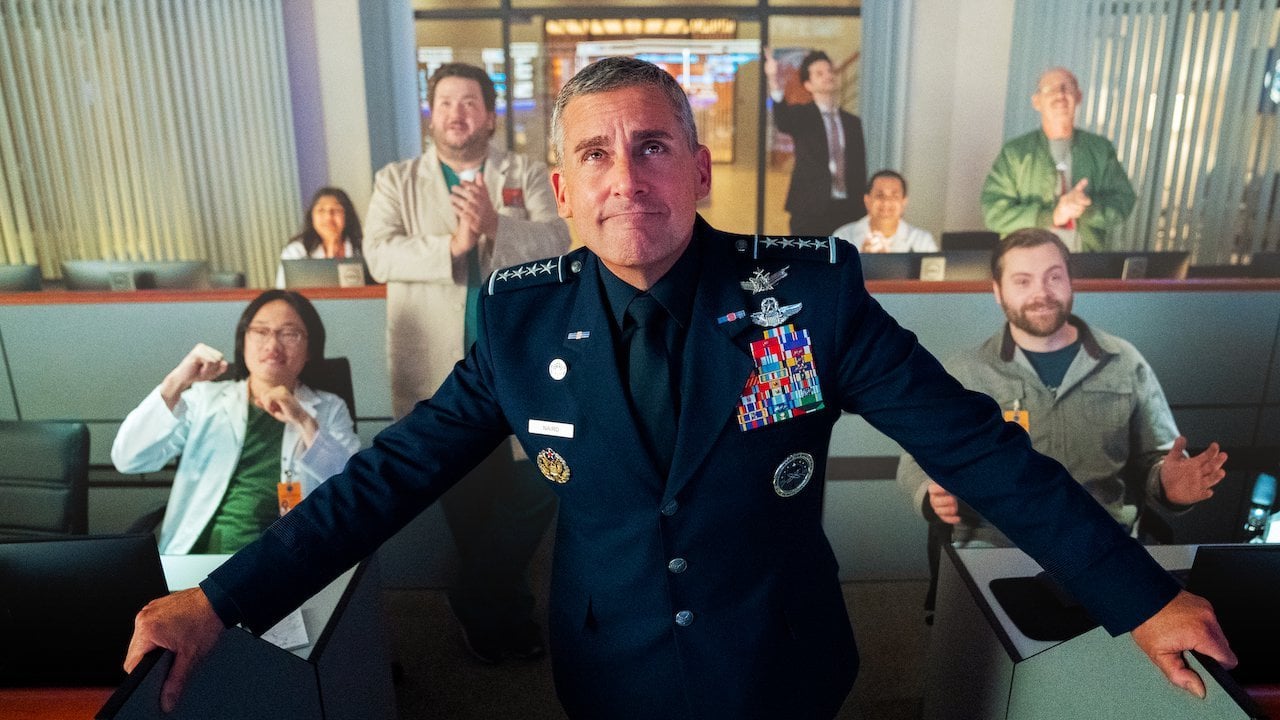 The biggest issue with the show, which has earned the heartbreaking title of “hot trash” is that Space Force just wasn’t that funny. It has its moments, but even those moments are fleeting and a tad awkward because the rest of the show is genuinely rather serious. Except for whatever the heck the space monkey scene was . . . that was . . . something else entirely.

The show is filled with family drama (so, so much), workplace stresses, and complicated relationships. None of these things are funny in the show – they’re genuinely serious and make funny moments like Naird (Steve Carell) singing to himself feel more out of place than they were intended to be.

These serious plotlines are truly engrossing though and piqued our interest. However, because the show thought of itself as funny, it frequently cuts these more emotionally serious parts short to get back to the awkward jokes. 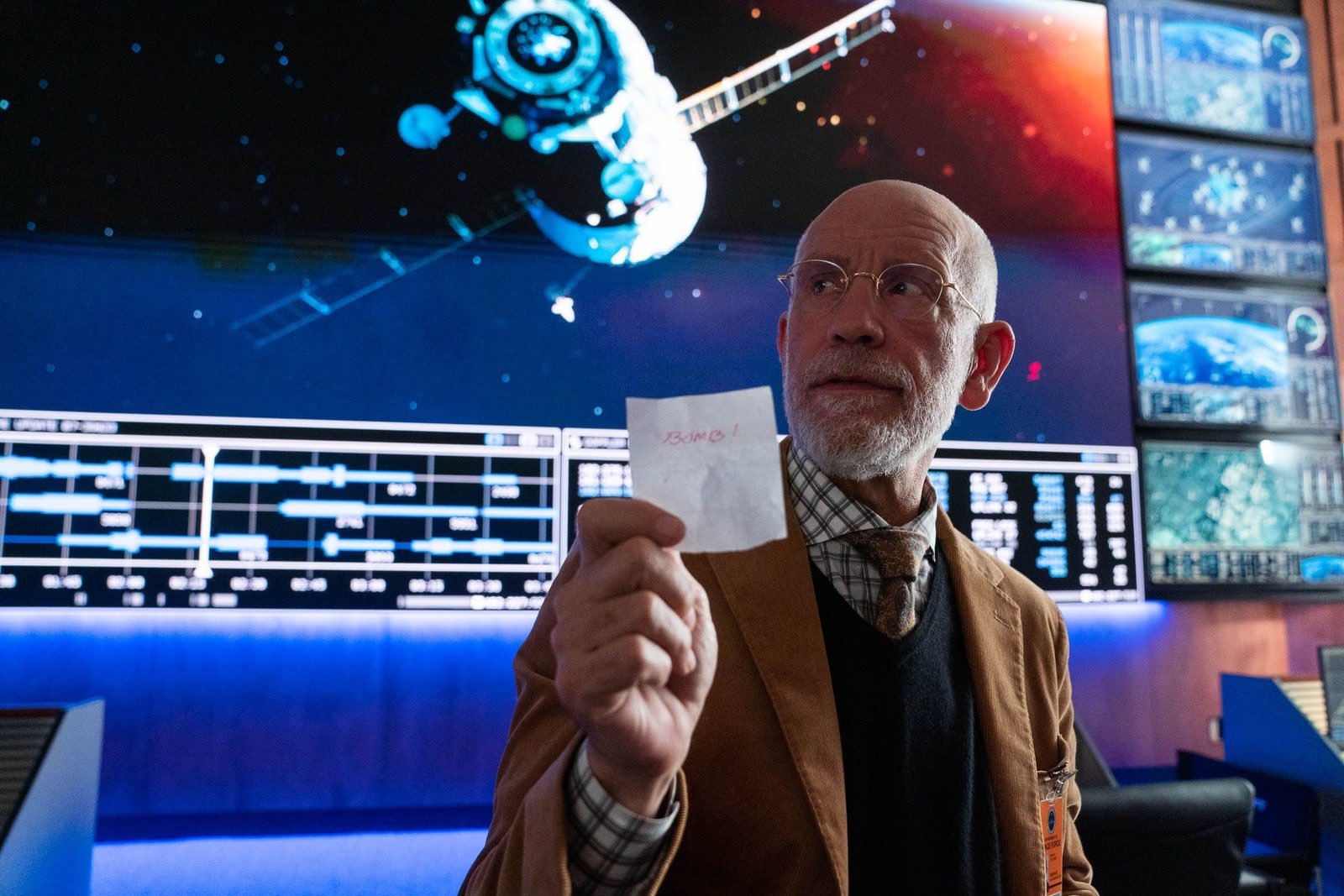 The best parts of the show were genuinely the more sincere parts. The father/daughter dynamic between Naird and Erin (Diana Silvers), which was fraught with tension, but filled with love, was great – but often gets glossed over in favor of cutting to a bad punchline.

In fact, Erin stole the show most of the time. Her budding romance with a newbie soldier was adorable, and the one episode where she hangs out with Captain Angela Ali displayed a really funny & sweet friendship we desperately wanted more of.

Naird and Mallory (John Malkovich) also have a very tense, but honest working relationship, which did occasionally provide actual funny moments, but they were at their best when they were having heart-to-heart moments. If the show could lean into being a more sincere dramedy instead of fancying itself a romping sitcom, the second season of Space Force could be worlds better. 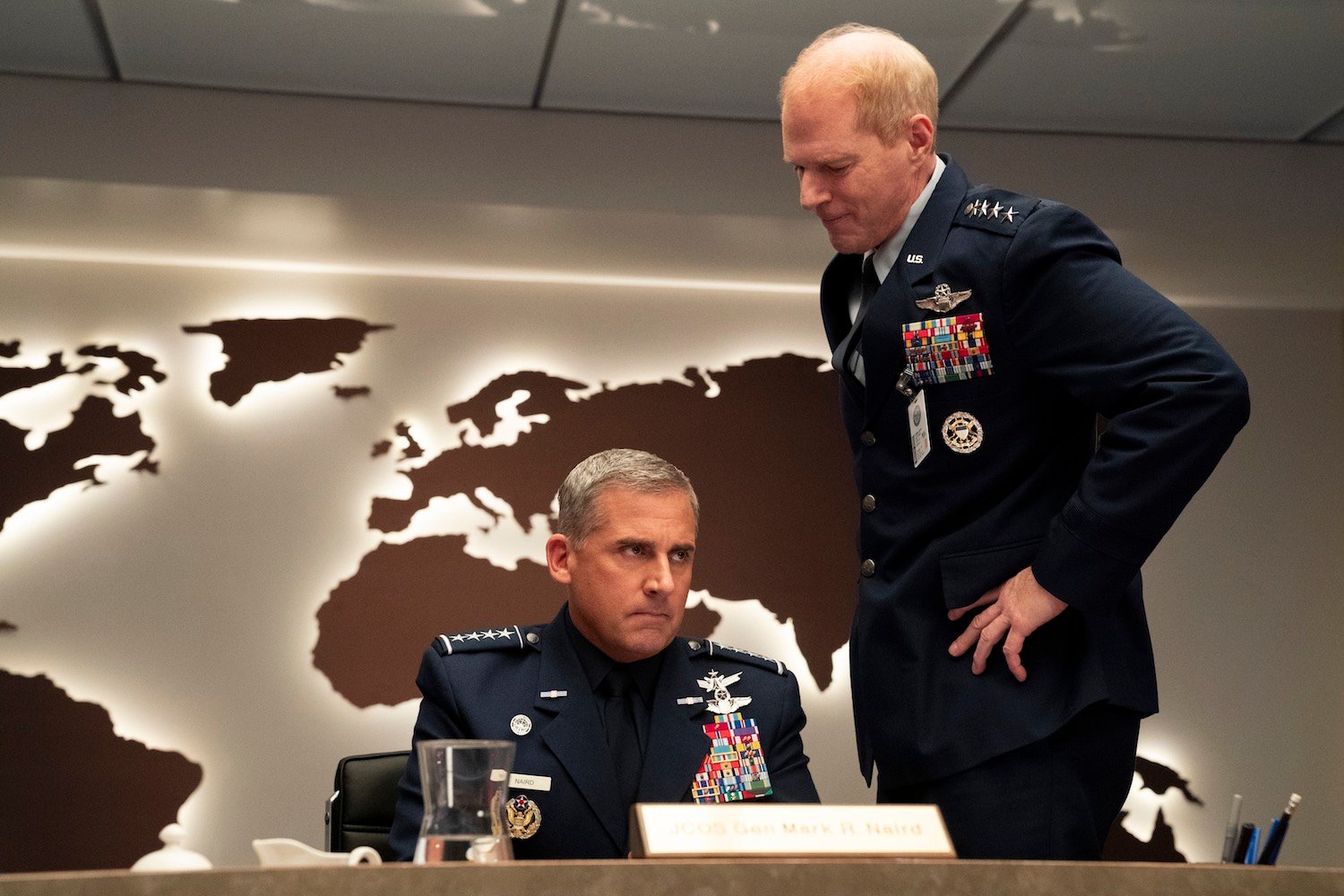 While the lack of comedy is what hurt the show the most for general audiences, our personal number one pet peeve for Space Force is theirs underuse of such incredible comedy stars. The show touts huge names from John Malkovich, Ben Schwartz, Lisa Kudrow, Fred Willard, Patrick Warburton, and Jane Lynch. And yet almost all of these people, with few exceptions, have less than ten minutes each in ten-episode series with episodes just over thirty minutes each.

Seriously, they show Kudrow at the beginning of the first episode, and then suddenly she’s in prison for a reason they never specify and we barely get to see her. Though, we do see vastly more of her than we do the likes of Patrick Warburton and Jane Lynch – which broke our hearts because we really need more of Warburton’s beautiful & distinct voice in our lives.

Really, why hire such talented and famous people for what are essentially bit parts? It’s a waste of star power & left viewers disappointed when they found out the people they saw in the trailer aren’t being featured. A lot of people watched the show to bask in the star power and watch them riff off of each other. 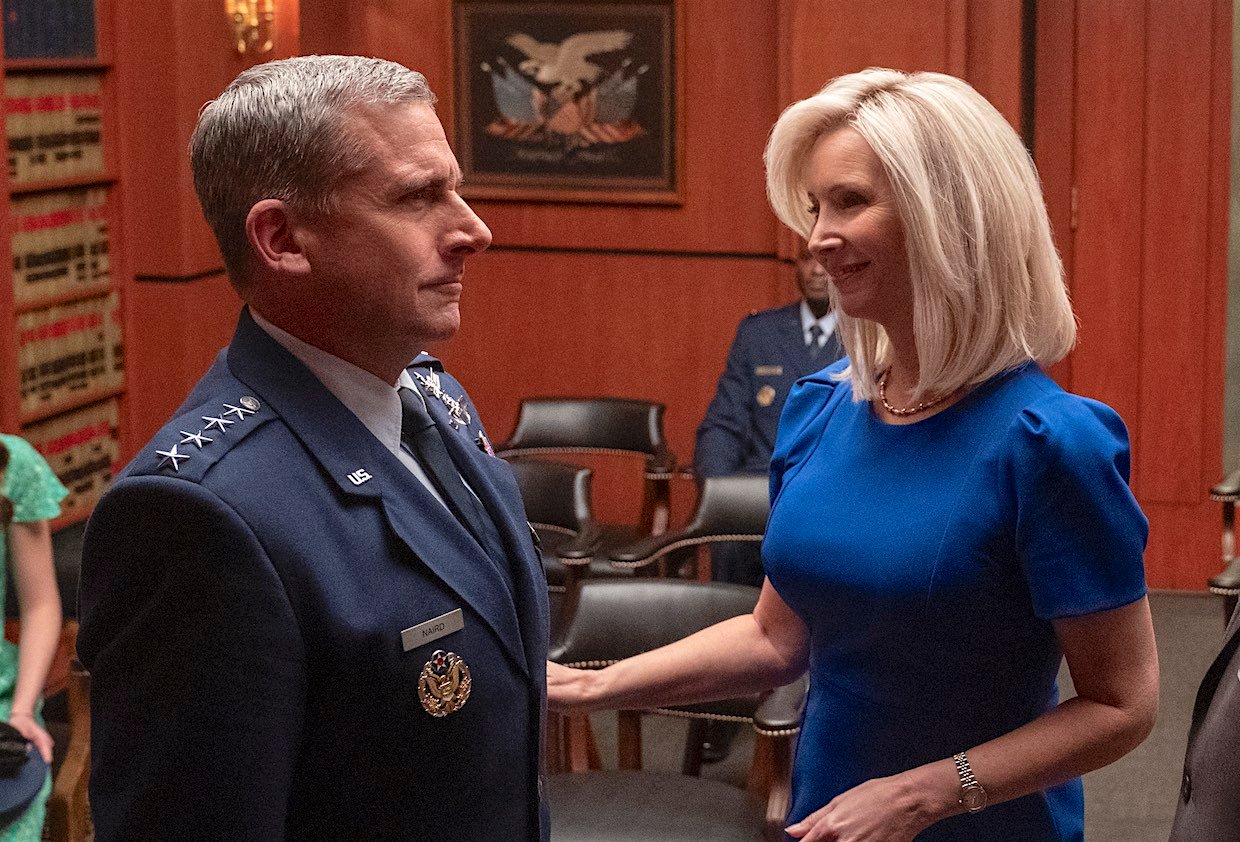 The plotlines in Space Force felt incredibly rushed. In ten thirty-minute episodes we go from having no space-based branch of the military to having a moon base which is destroyed and also at war with China’s space base.

The episode lengths were likely picked because the show was trying to be a comedy and comedy shows are pretty much exclusively half-hour blocks. But, as we mentioned earlier, the show felt more like a drama, which usually work better with hour-long episodes. Had the show embraced the genre they actually were, instead of what they wanted to be, we could have had more time to flesh out the plotlines of individual episodes, as well as the overarching one.

The plots were interesting, but almost entirely unexplored, and huge moments just don’t exist in the show. (Again, how did Kudrow’s character get arrested? What did she do?) Not to mention the entire first season could have just been the setting up of the space force. Instead, the show opts to skip ahead a few years to an already settled military base – entirely ignoring the antics and frustrations bound to occur when creating an entirely new branch of the military.

Overall, the show had boundless potential, which everyone working on the show very actively seemed to shut their eyes to and ignore. We hope Space Force is renewed for a second season, but only if it learns from their mistakes and fixes them. The show could be so good, but only if it’s willing to pivot on what they were intending to make, and embrace the gold mine they have in hand.