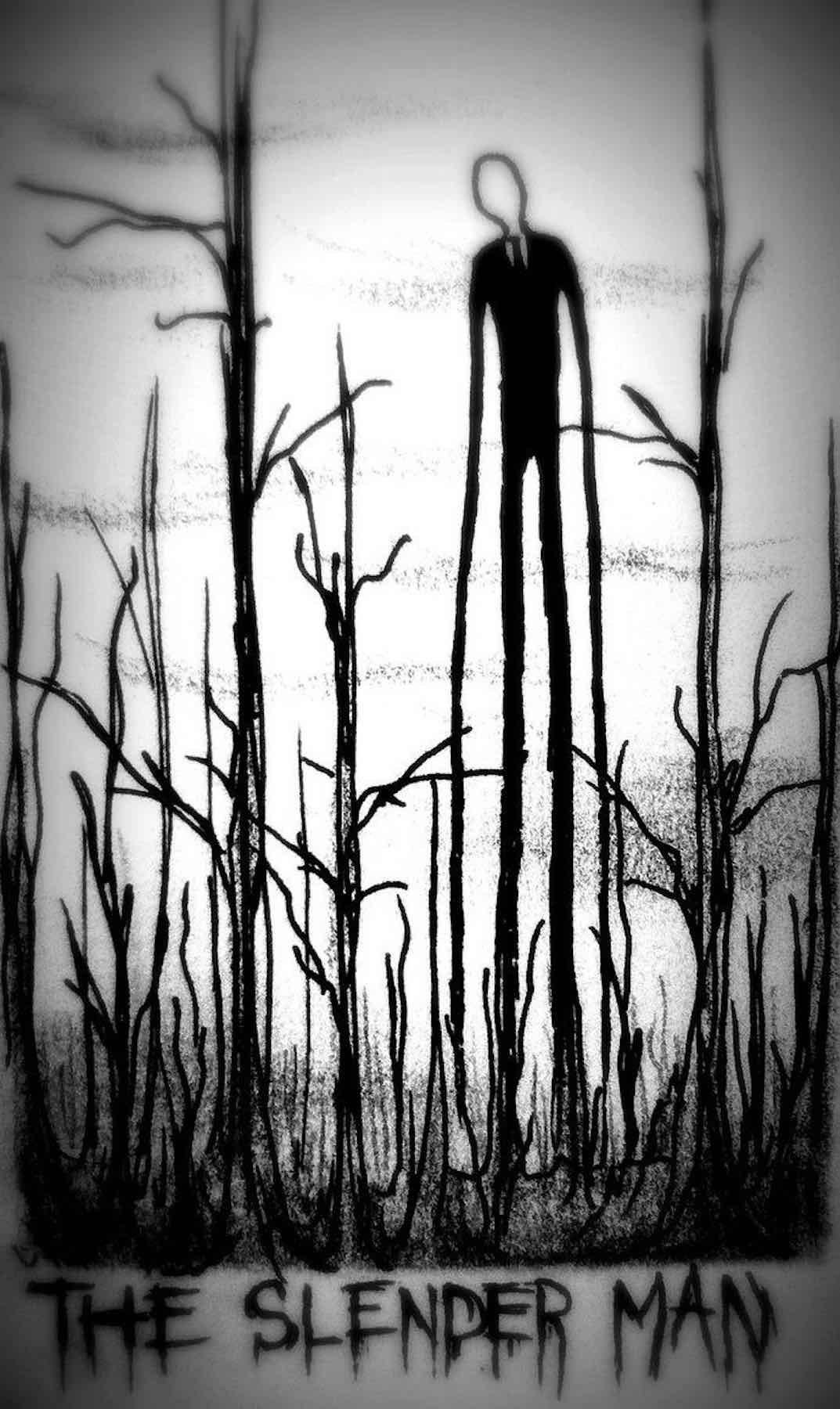 Slenderman is a creation of the internet – a meme, a videogame character, a simple horror story. Slenderman was first created in 2009 as what the internet likes to call a creepypasta. Creepypastas are spooky stories that are entirely made up, which get copied and pasted all across the internet.

Slenderman’s story described him as a skinny, freakishly tall, pale man without a face. He is usually depicted as wearing a black or dark gray suit. Images and lore started being made in Slenderman’s name as the idea of him went viral.

A video game was released in 2012 called Slender: The Eight Pages. In this low budget, free to play, indie game you wander the woods looking for eight pages (of what nobody knows). While searching the dark woods it’s your job to avoid bumping into Slenderman, lest you want to start the game over. The concept is simple, but the jump scares were more than enough for the game to also go viral. 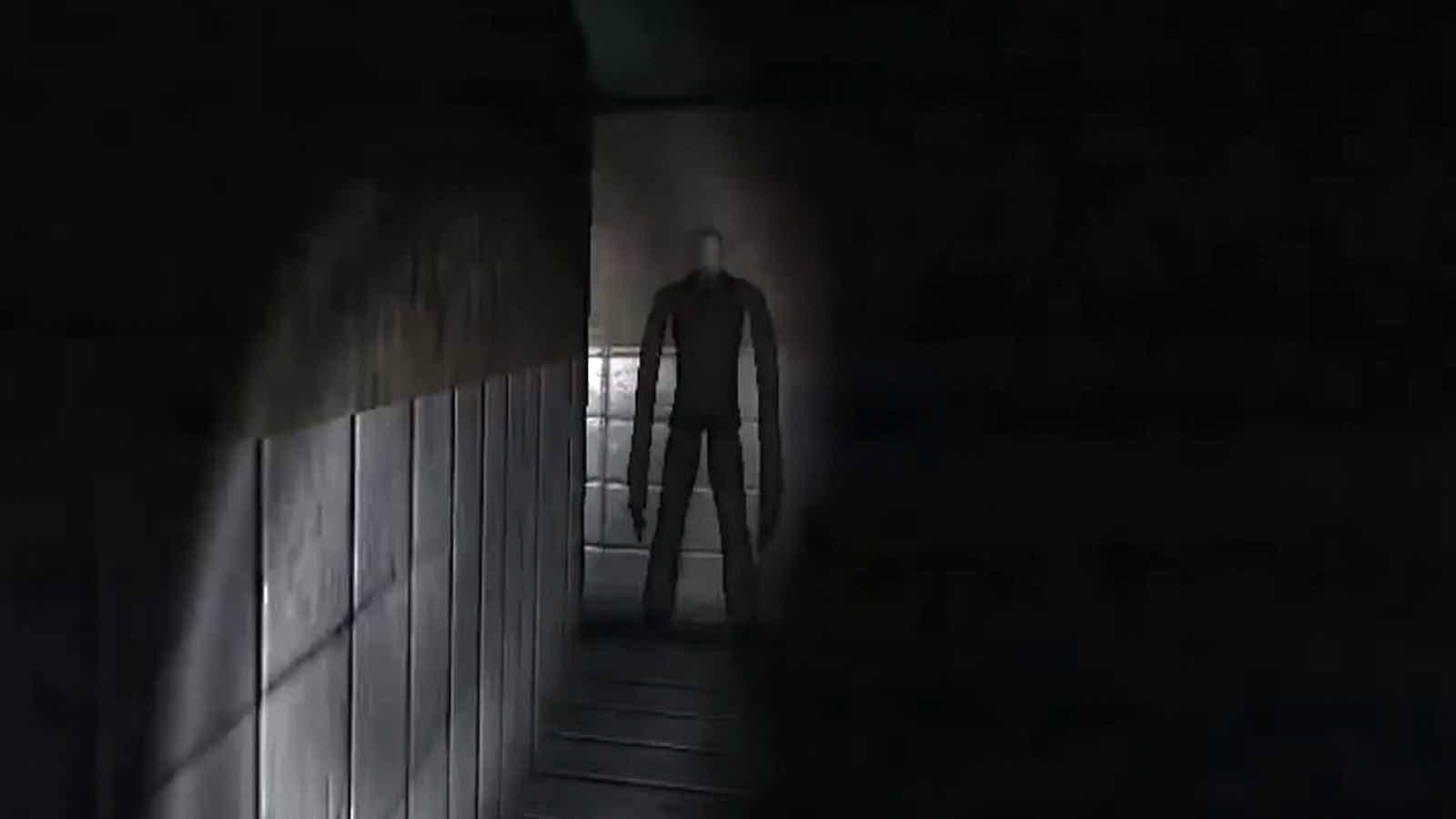 By 2014 Slenderman’s reach would go beyond the internet into the real world. Two twelve-year-old girls named Anissa Weier and Morgan Geyser stabbed their friend Payton Leutner nineteen times in the woods Their claim was that Slenderman was real and they wanted to impress him.

The crime was not impulsive or decided upon in the midst of playing pretend. On May 30th of 2014, the two girls had discussed the idea of taping Payton’s mouth shut and stabbing her in the neck before running away. They didn’t go through with the premeditated plan because they were too tired.

The next day, the 31st of May the tweenage crime was committed.  Originally Geyser and Weier had wanted to stab their friend in the park bathroom so the blood could go down the drains. Ultimately, what happened took place during a game of forest hide-and-seek. 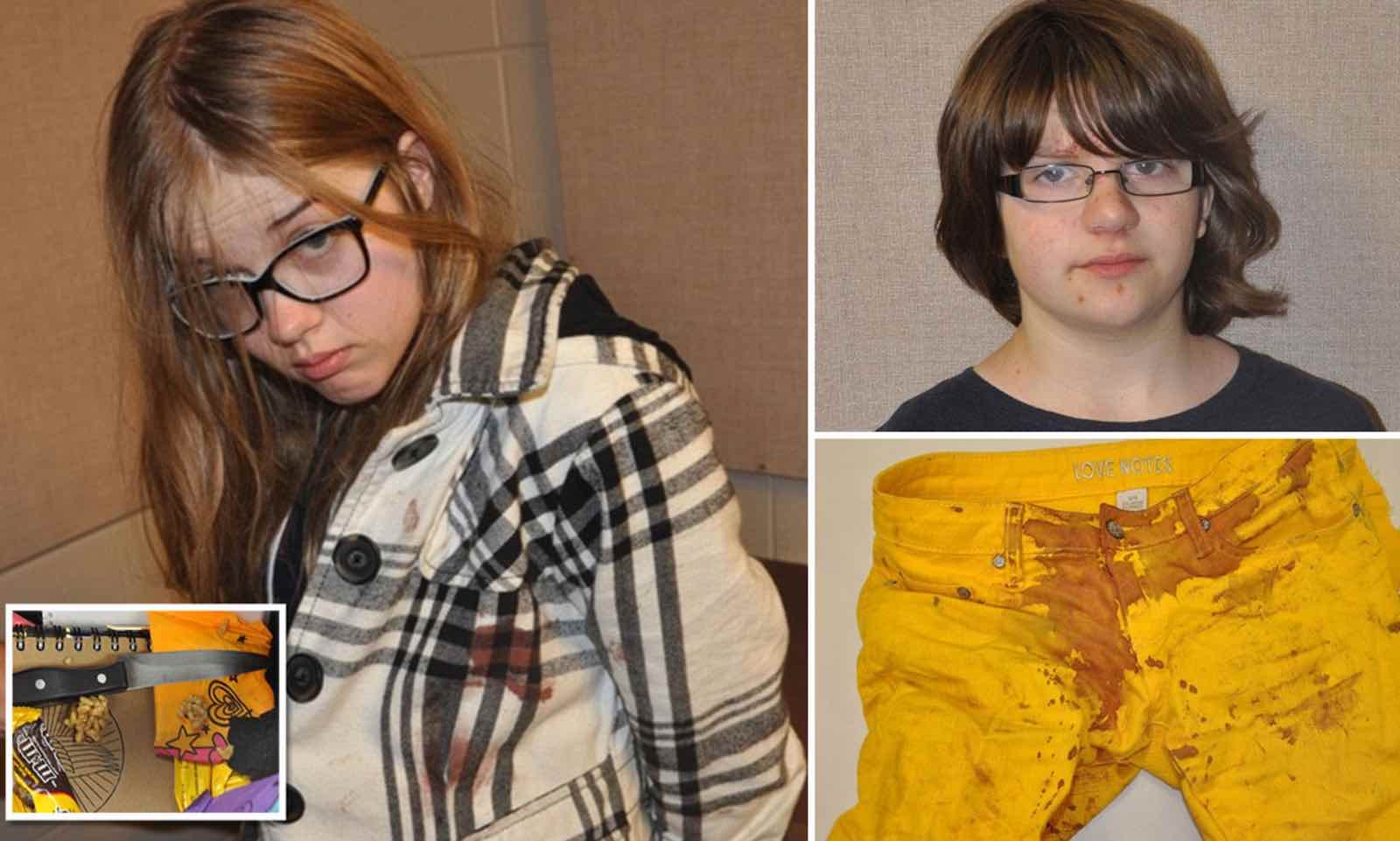 The two girls snuck up on Payton, pinned her to the ground, and stabbed her with a five-inch bladed kitchen knife. The nineteen stabs hit her legs, arms, and torso. One stab cut Payton’s liver and stomach, another missed a major artery connected to the heart by an almost immeasurably small margin.

Once the girls had finished stabbing their friend they told their victim to lay on the ground so the blood wouldn’t come out as fast. Before leaving the two would-be murderers said they were going to get help. They left with no intention of bringing anyone back to their friend.

Payton, obviously not trusting of her literally front stabbing friends dragged herself to a nearby road where a cyclist found the bleeding twelve-year-old. She was taken to a hospital where she stayed for six days, but she did recover. 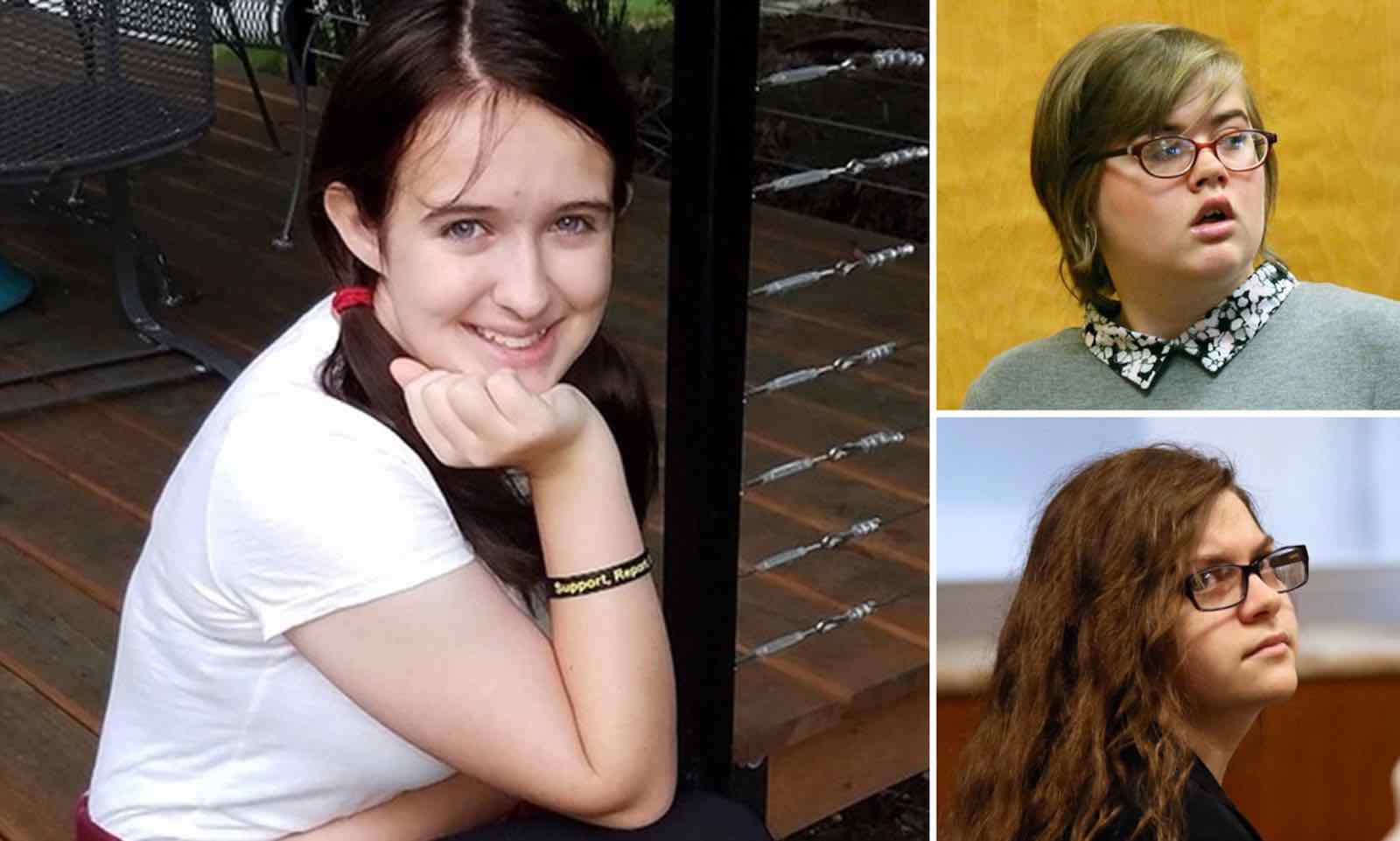 The little murderesses in the making were found at a furniture store, still carrying the knife in one of their bags. Geyser appeared to have no guilt or empathy for her friend, but Weier admitted to feeling guilty. Despite the seemingly compassionate response from Weier, she also said the attack was necessary to appease Slenderman.

Weier went to trial for the attempted murder where she pleaded guilty for attempted second degree murder. The jury found Weier not guilty by mental disease or defect. She was sentenced to 25 years to life with at least three years in locked confinement for involuntary psychiatric treatment. After which she will require communal supervision until age thirty-seven.

Meanwhile, Geyser accepted a plea deal which allowed her to skip trial if she would undergo psychiatric evaluation. The evaluation was to determine the length of time she should remain in a mental institution. She was given the maximum sentencing of forty years to life. 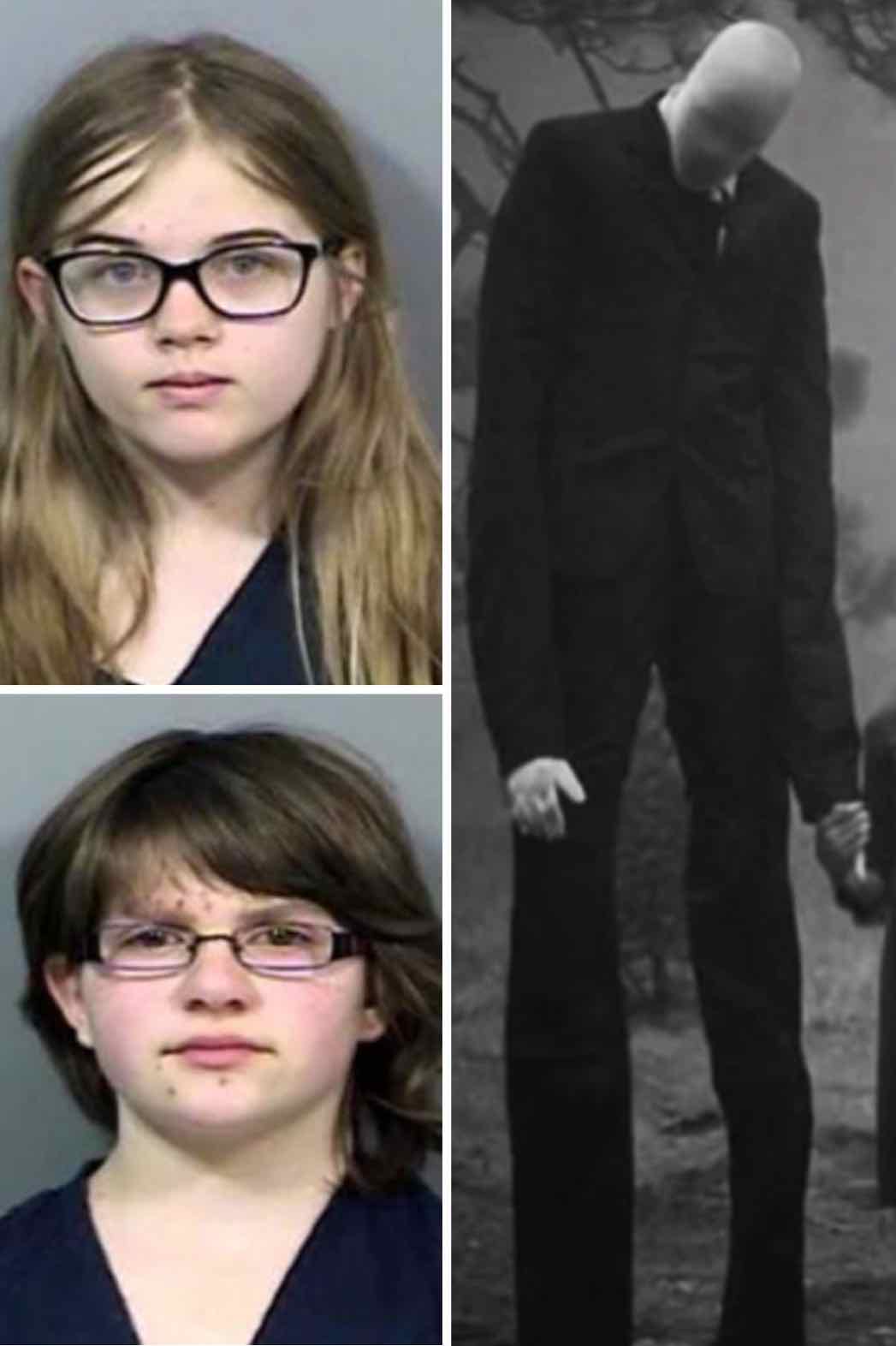 In this sentencing, she is required to undergo three years of locked confinement, just like Weier’s, after which will be more involuntary treatment until she is either free of symptoms or reaches the age of fifty-three– Whichever outcome occurs first.

In October of 2019, at age seventeen, Payton Leutner gave her first public interview on the events. She even went on to very maturely say “I’ve come to accept all of the scars that I have. It’s just a part of me. I don’t think much of them. They will probably go away and fade eventually.”

Payton further said she had become Geyser’s friend of her own accord because she had seen Geyser having trouble making friends. She didn’t think anyone should have to sit alone so she reached out to the girl. Payton went on to say nice things about the times she had spent with Geyser before the incident. 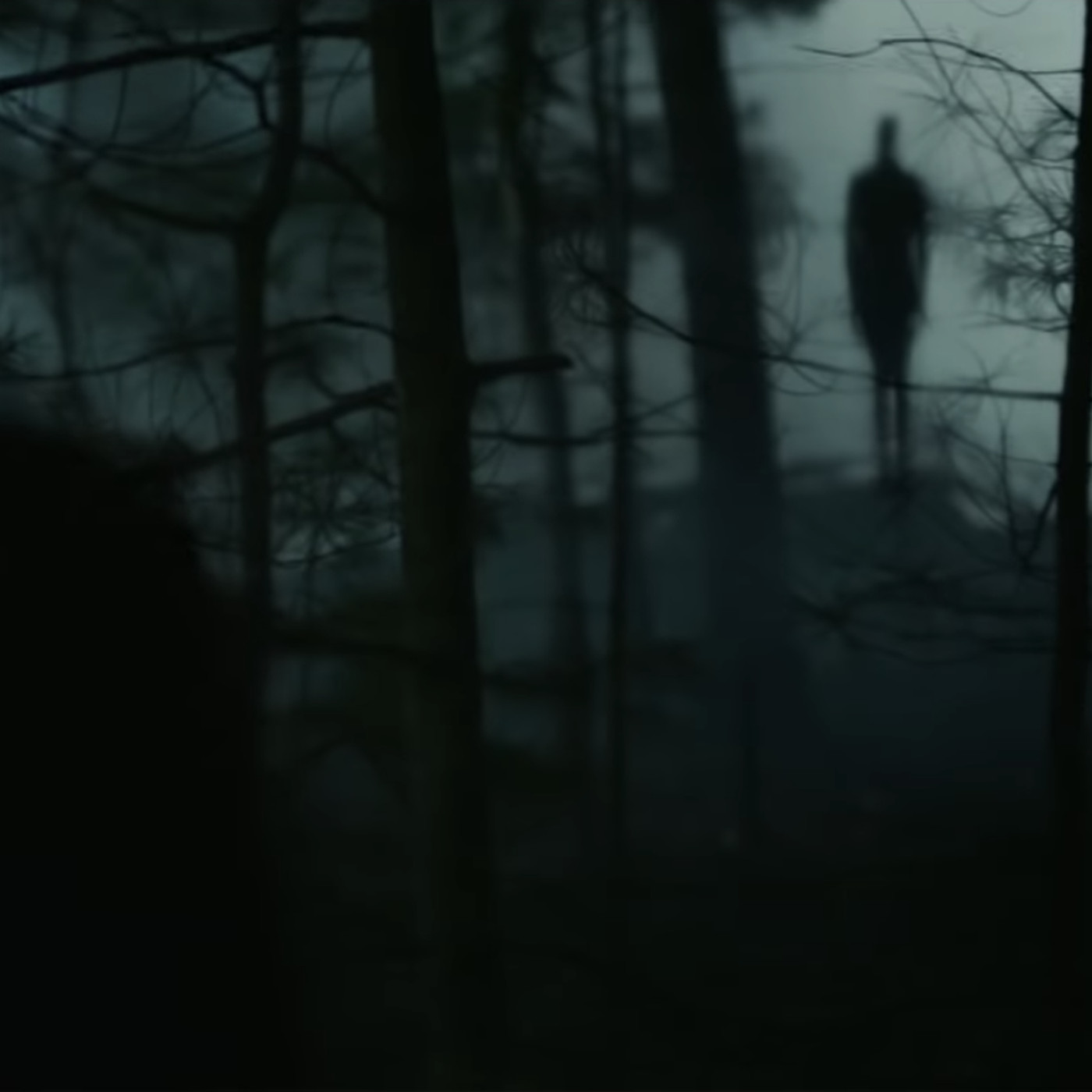 Payton said her friend began to change when Geyser met Weier. She believes Weier is the one who convinced Geyser Slenderman was real. She began to become uneasy spending time with the two of them, but continued the friendship anyway.

While Payton has done her very best to go back to life as usual, she has admitted she sleeps with a pair of broken scissors under her pillow, just in case. She also warns people to get out of any relationship that makes you uneasy before something happens.