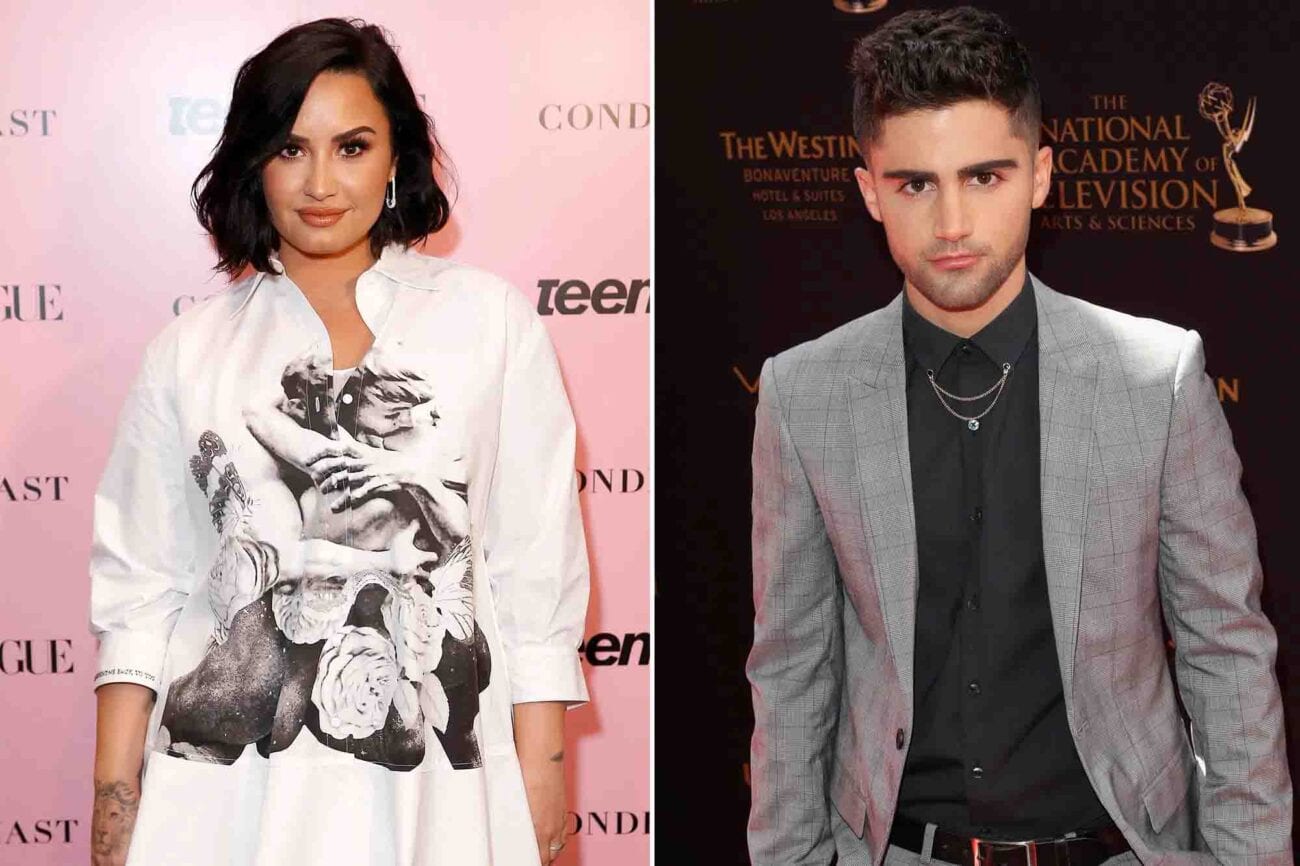 Max Ehrich’s cryptic Instagram posts: What the heck is up?

Pop star Demi Lovato and actor Max Ehrich began a whirlwind romance shortly before the world went into a full lockdown. The two decided to live together while quarantining because the budding romance was going so well. In fact, the relationship was doing so well that two months ago the couple announced they were engaged, despite knowing one another for less than a year.

However, recently it became clear the couple had called it quits – though the split appears to be less than amicable. Lovato has remained mostly silent on the subject, continuing to post to her social media accounts, just now without pictures or references to Ehrich who had begun to dominate her Instagram. Although just yesterday Lovato released a brand new single called “Still Have Me”, which is doubtless an anthem for her new found singledom.

Max Ehrich on the other hand, has been acting in ways that have the general public a little weirded out. Here’s what we know. 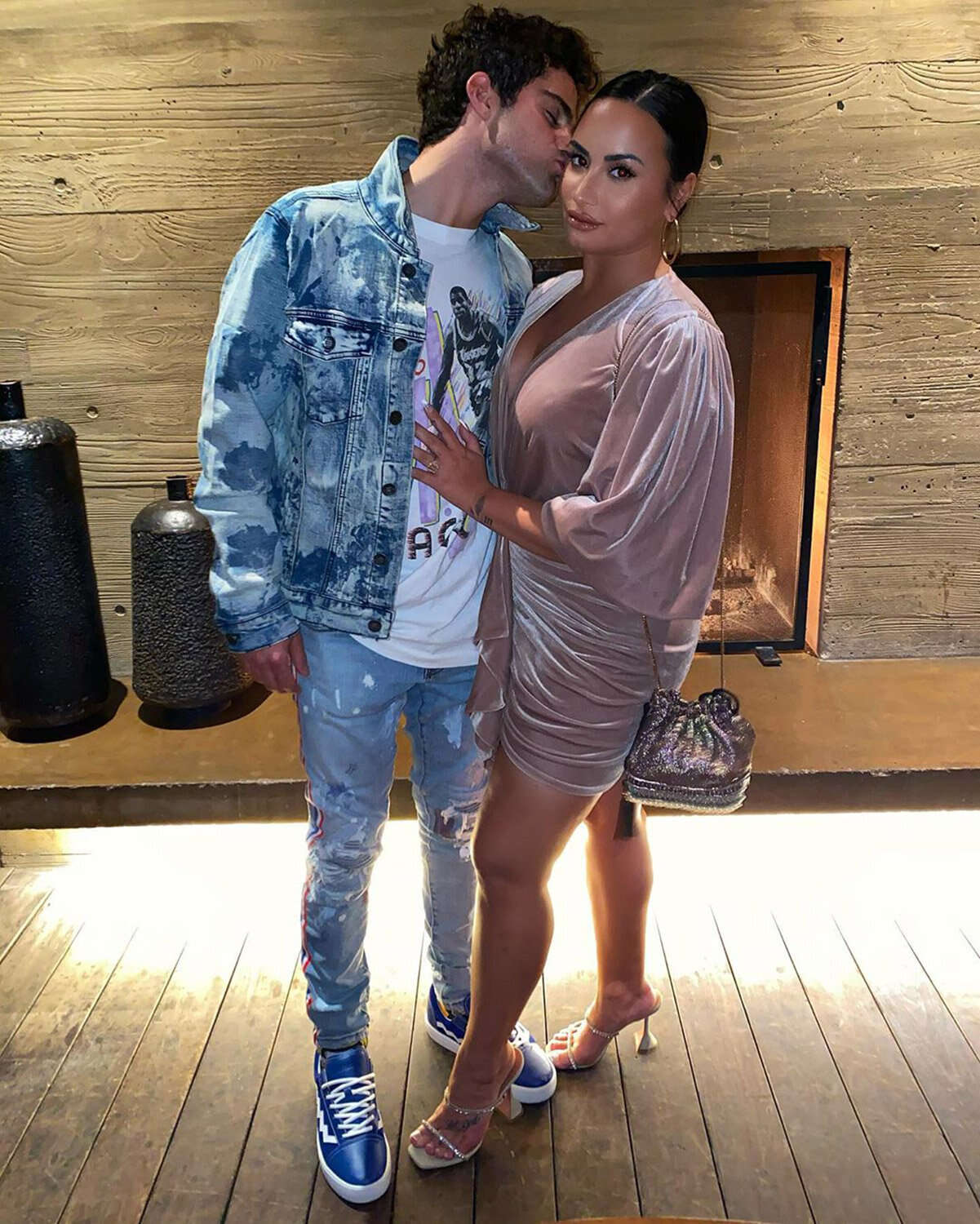 Demi Lovato has been through the wringer publicly. She’s opened up about her struggles with mental health, addiction, and love in the hopes she can positively impact her fans – which she has done successfully, and hopefully continues to do so for a longtime to come.

According to a source who talked to People, Lovato made the difficult decision to call of her engagement to Ehrich while he was away filming a movie because “Max shot up in fame, and it’s been hard” and eventually Lovato realized her fiancé was “trying to further his career by using her name behind her back.”

While Demi Lovato hasn’t come forward and said this to anyone herself, her stans are loyal and believe this is the truth. Another source claims that Lovato is embarrassed by Ehrich’s online actions and wants nothing to do with him anymore.

Did this pastor also happen to conveniently emotionally manipulated and trap someone who's vulnerable and make them lose faith in love all over again because they used that person to further their career? I wonder, Max Ehrich. pic.twitter.com/OxKDYteqyl

The screencaps in the above tweet are taken from Max Ehrich’s Instagram stories. He made these two posts shortly after tabloids began reporting the seemingly happy couple were no longer going forward with a wedding.

While the first post could potentially garner sympathy, the follow-up post made everyone do a double take. People were confused about what his movie role had to do with real life, but were even more shocked that in a time of supposed emotional distress he was plugging his upcoming movie. 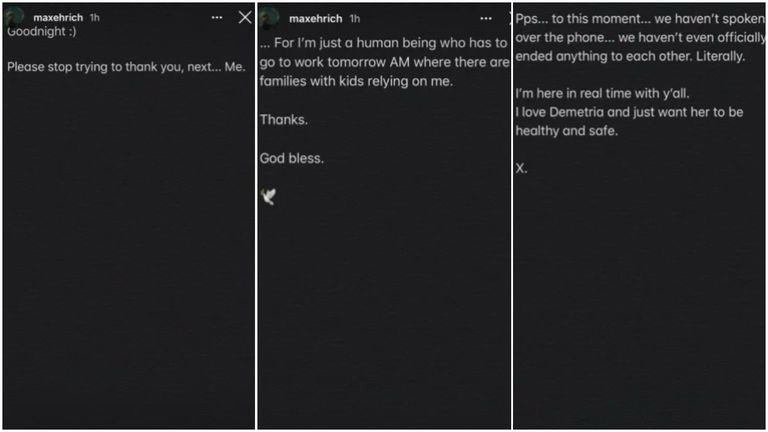 “Please stop trying to ‘Thank you, next’ me. For I’m just a human being who has to go to work tomorrow AM where there are families with kids relying on me. To this moment . . . we haven’t spoken over the phone . . . we haven’t even officially ended anything to each other, literally. I’m here in real time with y’all. I love Demetria and just want her to be healthy and safe.”

Fans weren’t quite sure what to make of this post because, again, the posts seem like the kind of thing that a person might write about an upsetting break-up, but the added note of being worried about her health and safety made fans’ eyebrows crinkle together.

This appears to have just been a precursor.

he deleted but i got a screen recording pic.twitter.com/3tIgUm0py3

Warning: The above video has a loud notification noise in it.

A fan managed to screen record three different Insta stories coming from Ehrich which appear to be claiming Lovato is somehow unsafe, not free, or otherwise being controlled. It’s weird, and sounds like a manipulation of very real #FreeBritney movement.

There has not, however, ever been a movement for Lovato, because as far as anyone knows Lovato has been doing quite well and is currently living on her own now that Ehrich has moved out. 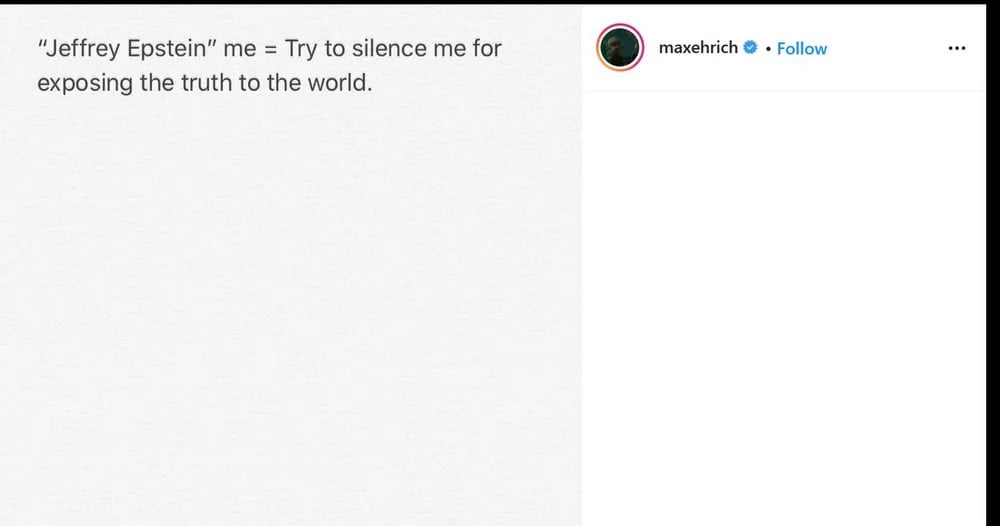 Off the deep end

In an Instagram post (not story) that was later deleted – but the internet always takes screenshots, Ehrich states “‘Jeffrey Epstein’ me = Try to silence me for exposing the truth to the world.”

We’re sorry –  what? We don’t think that means what you think it means. Jeffrey Epstein was a convicted sex felon who died in prison awaiting trial for more sexual abuse charges against minors. You do not want to liken yourself to this man – ever. Nobody has the faintest idea what Ehrich intended to say with this post, but it certainly didn’t make any Lovato fans want to give him the benefit of the doubt. 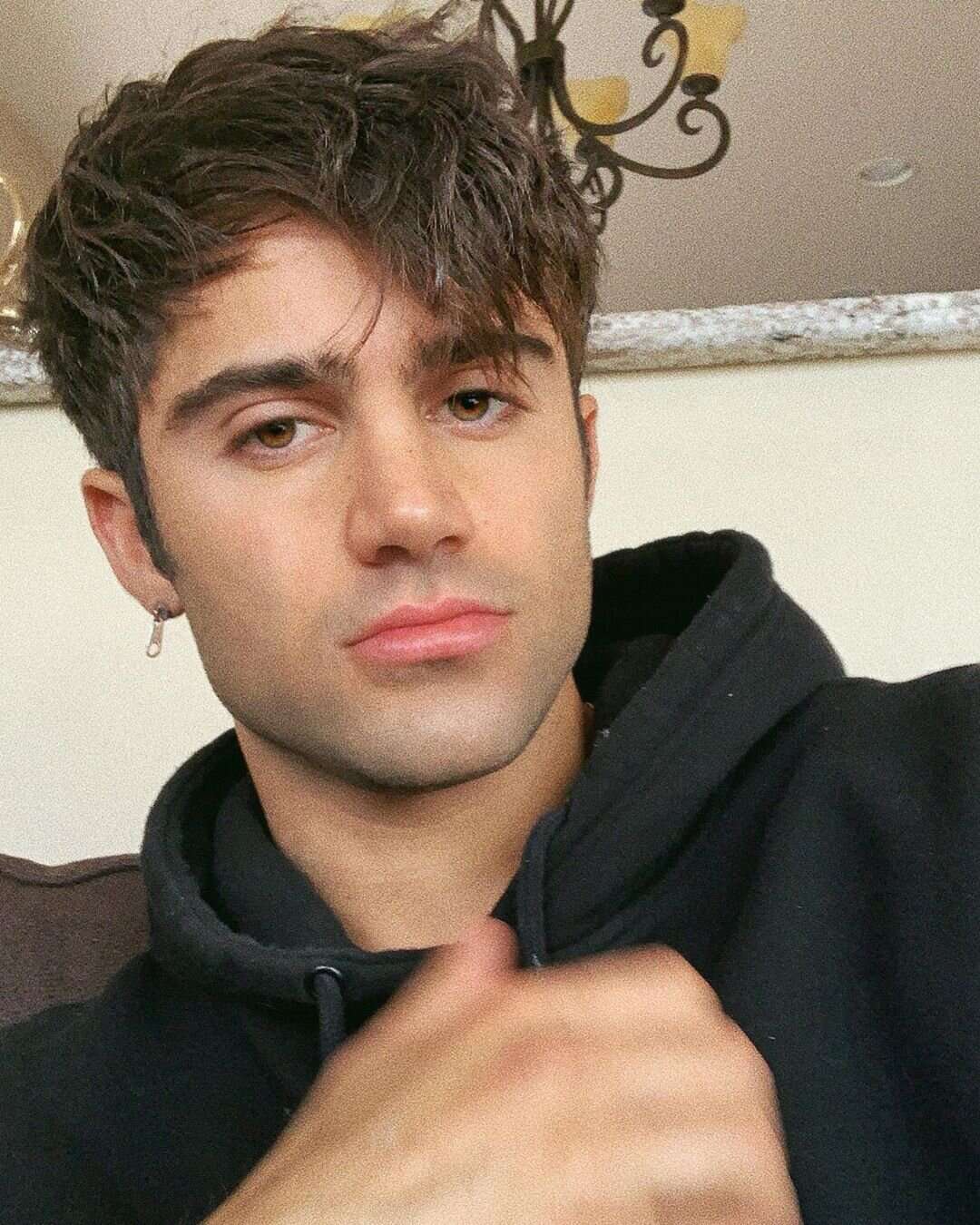 In a story he added “I’m so grateful for social media . . . For it gives a voice to every human being. If used purposefully; It shines awareness on things that need to be addressed. I’ll be posting on here for updates every few hours with pics . . . In case people try to ‘Jeffrey Epstein’ me.”

Again, nobody is entirely sure what he means here, but our best guess is that he’s referring to the widely held belief that Epstein was killed in prison. Although, why Ehrich might think anyone would want him dead is beyond anyone’s knowledge. 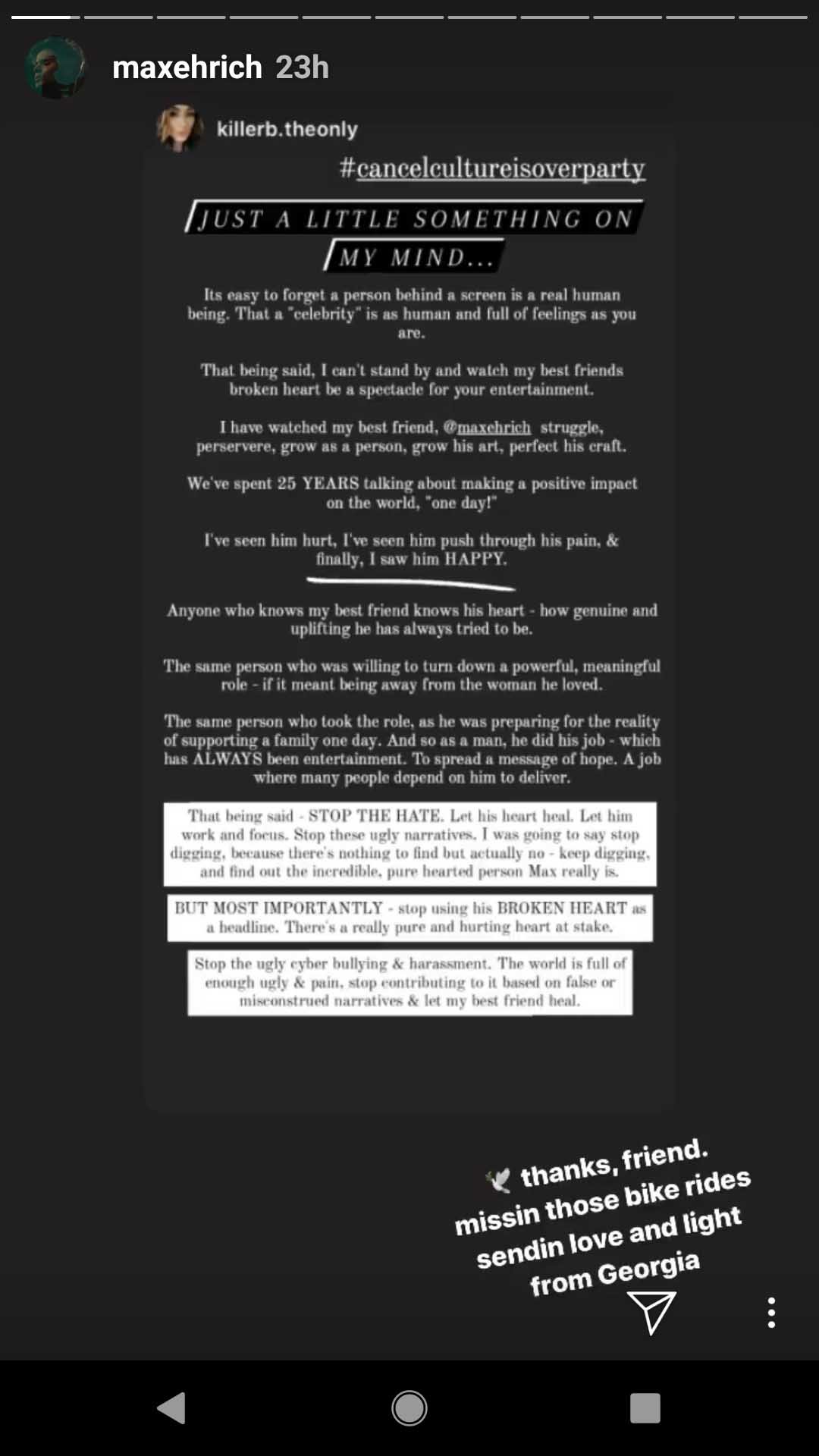 For those who don’t have eyes as good as Legolas, the Instagram story above was posted to Max Ehrich’s Instagram stories this afternoon, and is a repost of something one of his friends wrote. It says (with typos included):

“Just a little something on my mind . . . Its easy to forget a person behind a screen is a real human being. That a “celebrity” is a human and full of feelings as you are. That being said, I can’t stand by and watch my best friends broken heart be a spectacle for your entertainment. I have watched my best friend, @maxehrich struggle, persevere, grow as a person, grow his art, perfect his craft. 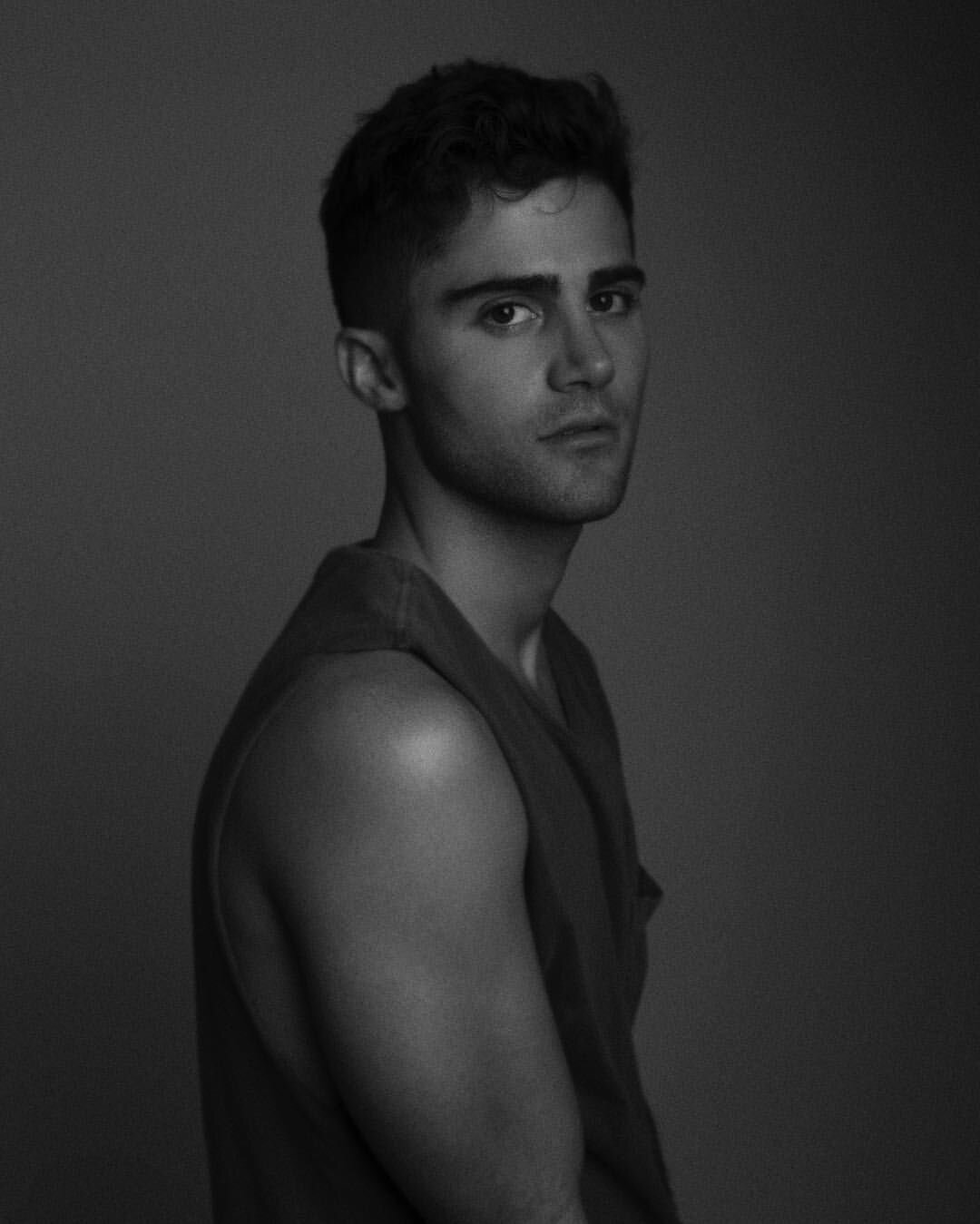 “We’ve spent 25 YEARS talking about making a positive impact on the world, “one day!” I’ve seen him hurt, I’ve seen him push through his pain, & finally, I saw him HAPPY. Anyone who knows my best friend knows his heart – how genuine and uplighting he has always tried to be. The same person who was willing to turn down a powerful, meaningful role – if it meant being away from the woman he loved.

“The same person who took the role, as he was preparing for the reality of supporting a family one day. And so as a man, he did his job – which has ALWAYS been entertainment. To spread a message of hope. A job where many people depend on him to deliver”.

The friend then goes on to ask that people stop using his pain as entertainment.

So far, this is really all anyone knows regarding the break-up. Max Ehrich has spoken about the break-up, but the things he has said don’t make sense, don’t line up with the fact we know, and/or seem to be unrelated to the issue at hand.

So, unless and until Demi Lovato herself decides to open up about the situation publicly, nobody can truly know what went down between the two. Which will leave fans & curious bystanders watching both Ehrich’s and Lovato’s social media accounts for new weirdness or some desired answers.