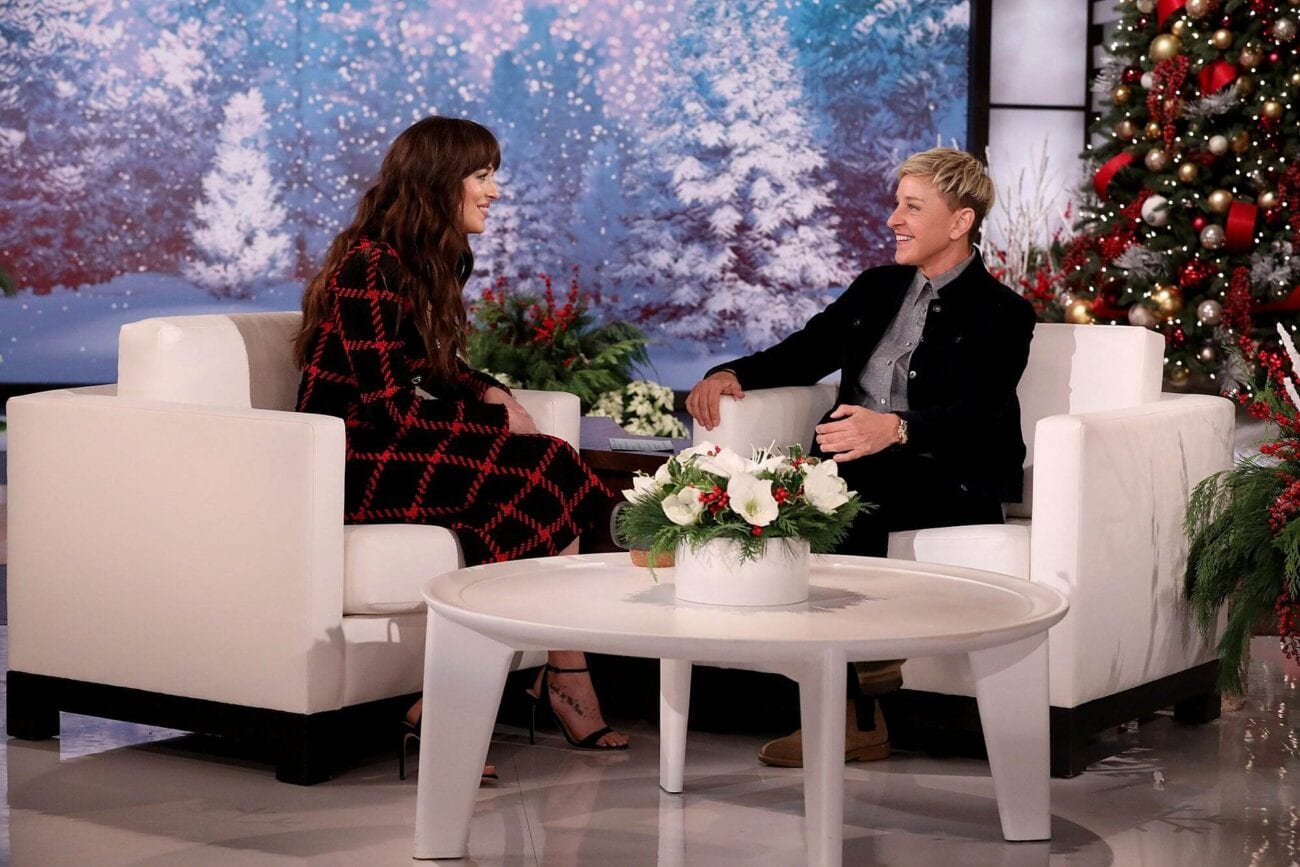 Ellen’s saying goodbye to The Ellen Degeneres Show for good. In 2022, the show will breathe its last. After the run of almost 6,000 episodes & 2,400 interviews, it will be the end of an era, but also something we all saw coming. Fans are now thanking Dakota Johnson for setting this in motion.

it will NEVER not be funny to me that Ellen's public downfall started when she lied about not being invited to Dakota Johnson's party, when in reality she couldnt come because she was at a football game with her good friend George W Bush. https://t.co/nVJHddeaSD

The truth behind why The Ellen DeGeneres Show is ending

Ellen’s downfall might as well have begun when Dakota Johnson first called out a “senior moment” Ellen had about her own whereabouts. When Ellen appeared to bully Dakota by mentioning how she wasn’t invited to Dakota’s birthday party, Dakota was taking none of her s&%$. Instead, she didn’t hold back before calling Ellen out.

Dakota Johnson said: “Actually that’s not the truth, Ellen.” The truth was that the weekend everyone was talking about – Ellen was spotted at a game, alongside former U.S. president George W. Bush. It drew a lot of heat because Bush is considered a highly problematic public persona, so it seemed very unsavory to hang out with someone who signed anti-LQBTQ legislation like DOMA.

Or the Fifty Shades of Grey star might be feeling smug that the world is finally catching up to the lies & manipulation, the gaslighting & power misuse that pervades even celebrity/guest interactions. She might have set the ball rolling to unravel other issues.

So, what’s the truth behind Ellen’s departure?

Creative limitations, Ellen cites. It’s what she told The Hollywood Reporter, and we quote: “When you’re a creative person, you constantly need to be challenged — and as great as this show is, and as fun as it is, it’s just not a challenge anymore.”

We’re having a hard time wrapping our head around this statement, due to the timing of it. While it’s true that she’d been toying with the idea of hitting the brakes since a couple of seasons — it’s a hectic undertaking, after all, with 180 episodes being shot in a year for each season — it’s the timing that’s gnawing at everyone.

ellen degeneres: “I'm ending show because it's not a challenge anymore.”

dakota johnson: "Actually, no, that's not the truth, Ellen,” pic.twitter.com/hpoSJ29NeQ

In her latest episode, too, she emphasized: “two years ago, I signed a deal for three more years and I always knew in my heart that season 19 would be my last.” By the looks of it, what solidified this for her was the tumult of the past year & the stains of the allegations that have been hard to clean off.

Last year, at a time when the pandemic had thwarted a lot of the shooting plans, Ellen was already drawing flak, comparing the quarantine experience to prison when reports surfaced that her employees hadn’t been compensated — fairly, or at all — for the pandemic-led readjustments. Then a BuzzFeed News investigation exposed glaring details about the show as a toxic workplace with a bullying problem.

Ellen DeGeneres ending her show because "it’s just not a challenge anymore" pic.twitter.com/PDNl1CWcCg

Since then, a lot has happened. Three senior producers have lost their jobs, and Ellen herself delivered an on-air apology last September. The ripple effects of the scandal are hard not to notice. Ratings have plummeted after the allegations surfaced, and even though Ellen’s had her celebrity friends joining in, the audience has better things to do with their time.

Nielsen data is available as proof that the show saw the loss of more than a million viewers over the next six months following the Season 18 premiere. Despite all this, she maintains that’s not why she’s ending this. She was quoted as saying, “If it was why I was quitting, I would have not come back this year. I really did think about not coming back, because it was devastating.”

And then went on to add how the attacks on her, her morals . . . hurt her. “It started with attacks on me and attacking everything that I stand for and believe in and built my career around.”