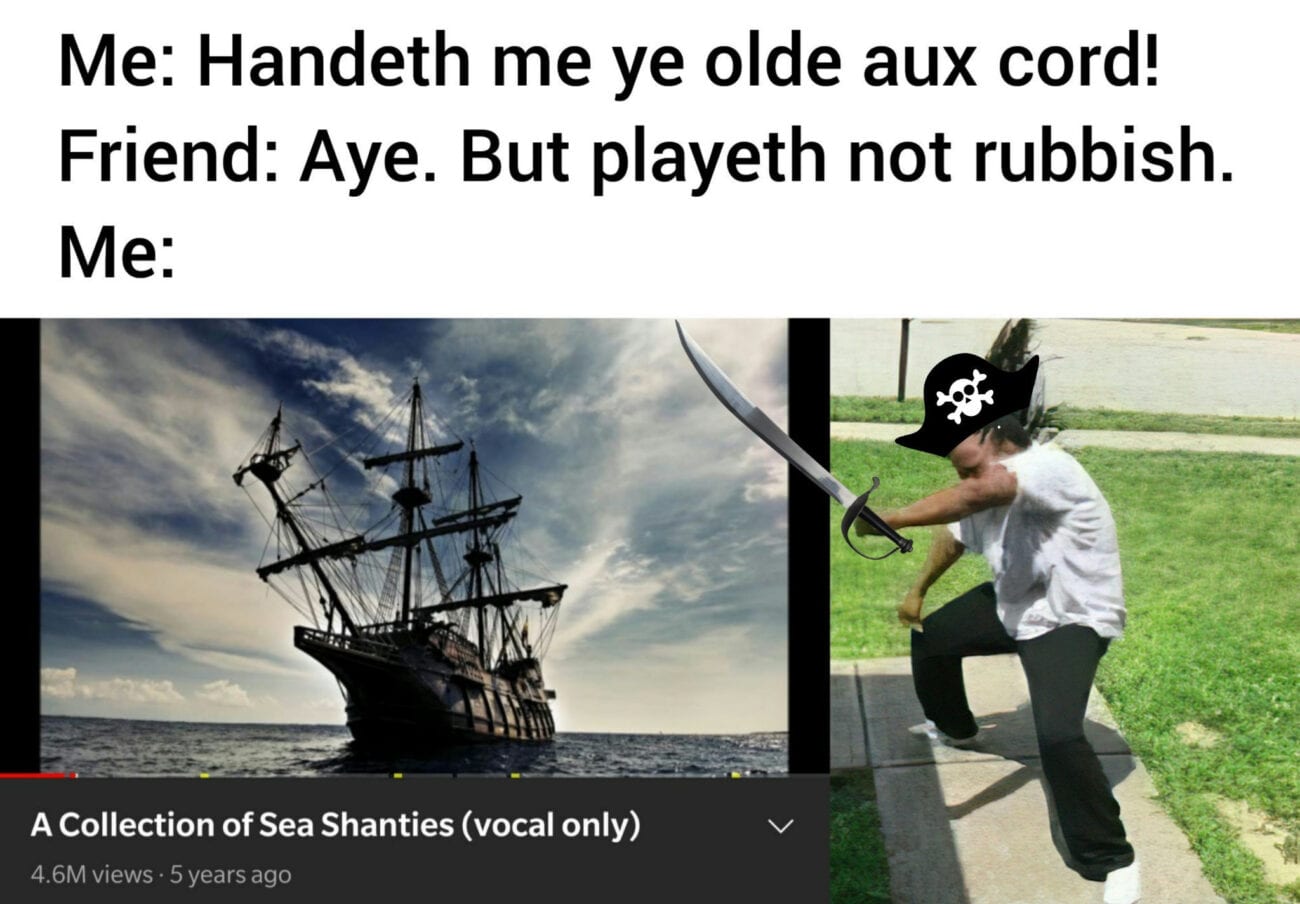 Why is TikTok obsessed with sea shanties? Dive into the strange trend

Has this happened to you? You’re innocently on the couch, scrolling through your phone, and minding your own business. Then, out of nowhere, a TikTok comes up with some guys singing in five-part harmony. It might slap, or it might not. But then, from the other room, you hear your significant other, roomie, or sibling join in with a rousing chorus of “soon may the wellerman come/and bring us sugar and tea and rum . . .  ”

Bonus points if they sang a harmony part rather than the melody.

Confused? Avast, me hearties! Let us set sail for the long-forgotten waters of sea shanties. These songs were sung by sailors on long voyages to pass the time and keep morale high. But that still doesn’t explain why sixteenth & seventeenth-century sea shanties are emerging as a music trend.

Although UK History claimed sea shanties can be traced back to the 1400s when “tall” sailing vessels were developed and voyages began getting longer, other sources trace it back to the Vikings, who have a centuries-old tradition of singing songs and seafaring.

Although both these traditions should lead to sea-shanties, it’s unclear whether the Vikings sang proper sea shanties or had a different tradition altogether for seafaring & working songs. However, the historical uncertainty didn’t stop Skyrim or History Channel’s Vikings from including or writing some Nordic sea shanties.

In fact, videogames arguably got into the trend before TikTok, with games like Assassin’s Creed releasing their own sea shanties. World of Warcraft even wrote a sea shanty for their character, Jaina Proudmoore a couple of years before sea shanties exploded on TikTok.

The sea shanty as we know it has a structure that could be described as a distant cousin of a capella groups like Pentatonix. Sailors would sing in rhythm with a solo singer, a shantyman, leading the group with a verse. Then, in three- or five-part harmony, the crew would join in with the chorus. These songs would be short, rousing, and help a crew who was fatigued with being on the ocean in the same vessel for a long, long time.

Bored in the house

So what do you do with a drunken sailor – or a drunken TikToker who’s been bored in the house and in the house bored since March last year? If you’re like Nathan Evans, a Scottish postman, you start singing sea shanties. His rendition of the popular sea shanty “The Wellerman” was a late Christmas present for TikTokers, posted on December 27th, 2020 for their listening pleasure.

Soon, the sea shanty was dueted and other popular TikTokers got in on the act. Sea shanties on TikTok exploded, with channels dedicated to the singing tradition. Elsewhere on the internet, the “sea shanties” subreddit became the ninth-fastest growing page on Reddit.

Anyone on the sea shanty vibe should catch ‘Fisherman’s Friends’ (2019) on Netflix. Based on a true story.

“Sea shanties have long united 10 Cornish fishermen, but when their chants sail to the music charts, their friendship is kept at bay”. #seashantypic.twitter.com/Ho8IVsFPVn

The Guardian reported that Nathan Evans had been performing fold songs on TikTok for months before “The Wellerman” went viral. One of the songs was the Irish folk song “Leave Her Johnny”, which is often featured in collections of sea shanties.

“I hadn’t listened to many sea shanties, and then when that video took off I realised that people actually really liked that kind of music, and I found I enjoyed doing them,” Evans said of his TikTok success. In the last month, Evans has appeared on TV, radio shows, and even got the attention of John Legend.

Like everything on the internet, sea shanties aren’t just being sung, they’re being memed. From pointing out The Simpsons did it to coming up with hilarious reasons why sea shanties are becoming popular, memes are buzzing about sea shanties. Our favorite? The Renaissance festival crowd’s going stir-crazy since they can’t go to fairies anymore. This summer, expect to see jousters galloping through the streets!

However, YouTuber Adam Neely argued that sea shanties are suited for TikTok. Apart from their short, easily-digestible & catchy form, he said they’re a “novel form of musical antiphony”. Essentially, call & response, which you can find all over modern music.

Neely explained call & response was solidified in sea shanties on nineteenth-century whaling vessels and made their way there from slave plantations & African music traditions. You can find call & response in rock, jazz, gospel, and most directly at concerts when the performer prompts the audience to respond.

“With no live concerts and no safe religious gatherings in the past year,” Neely explained, elaborating on the human tradition of collective singing which brings communities together. “We’ve been cut off from this pretty profound aspect of our shared, musical humanity, and so we’ve been left trying to find alternatives.”

TikTok’s duet function allows users to layer their videos on top of each other, coming together from all parts of the globe to put together a five-part harmony like a sea shanty. Although users can’t be present together to sing thanks to COVID, they can still use the app to sing together and make some pretty incredible music.

Have you jumped aboard the sea shanties ship? Did you create some great harmonies on TikTok or elsewhere you’d like to share? Comment below and let us know!