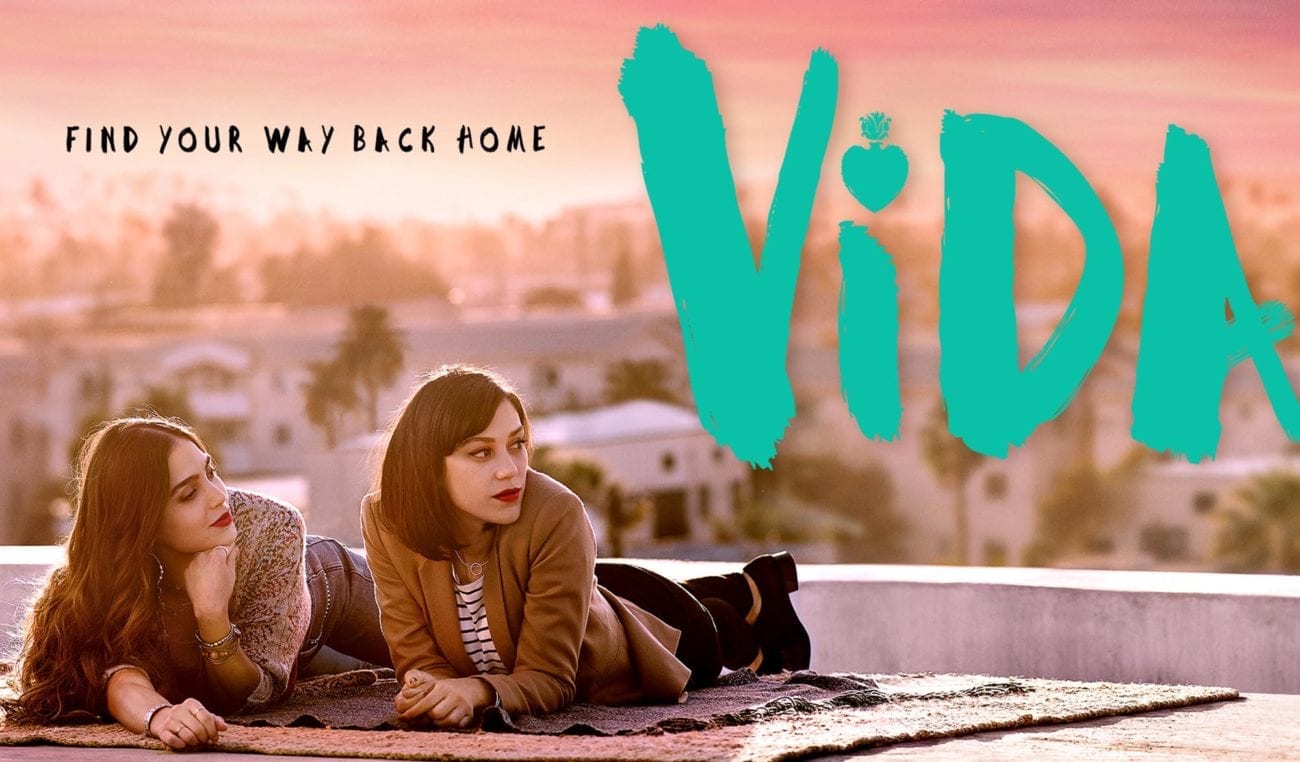 Happy May Day everyone! For most people, today marks the start of summer. But for the fellowship of the bingewatchers, it marks a new month of fresh content. One such show we’re excited about is the upcoming drama Vida, which was first announced by Starz back in 2016 as one of three projects based on Spanish-language formats and stories from Hispanic creators, writers, and producers, something the network’s CEO Chris Albrecht described as part of its “programming strategy of seeking diverse voices” and targeting “underserved audiences”.

The show is part of a new wave of programming that caters to Hispanic viewers, offering a diverse story that covers a range of modern themes. Focusing on two Mexican-American sisters from the Eastside of Los Angeles, Emma and Lyn (Mishel Prada and Melissa Barrera) return to their old neighborhood where they are confronted by the past and the truth about their mother’s identity. It’s not just the Latinx community this show speaks to – the half-hour drama’s storyline presents LGBTQI themes, gentrification, and a side of LA not often portrayed in mainstream TV shows.

When the show received notable buzz during its promotion at this year’s SXSW festival, the critics noted creator Tanya Saracho’s unique coming-of-age themes and focus on strong female protagonists. With the show’s release creeping up (May 6, folks – get it in the datebook), we’ve decided to look at how Vida takes coming-of-age tropes and transforms them for a modern audience:

The show follows the journey of the two estranged sisters as they travel home to LA following the death of their mother. While both were brought up under the same roof, they grew up to lead very different lives – Emma lives in Chicago with a job and responsible life. On the other side of the coin, Lyn is all about having a good time and is happy to manipulate people to get what she wants in life.

While they’re running on different paths, when their mother collapses on the bathroom floor and passes away, they are forced to work together as a unit once more. The show’s narrative twists the coming-of-age trope of experiencing grief by tying it in with other themes; with their mother’s death comes the revelation of a secret that was held from them their entire lives. Now the girls go through the process of seeing their parent as a real person rather than just their mother, while also weaving in an inadvertent “coming out of the closet” moment. As IndieWire put it, following the death of their mom, “Not only do Emma and Lyn need to learn to work together, but there’s an unexpected third cog in the machine: Eddy (Ser Anzoategui) is their mother’s ‘roommate’, and she’s been helping run their bar, apartments, and home.” Soon the girls come to realize the roommate is actually their mother’s lesbian lover whom she married in the later stages of her life. Up until now, these two women had only seen their mom as a parental figure.

The Hollywood Reporter described how things get immediately more complicated when they are forced to confront a secret that is immediately obvious to audiences, but takes Emma & Lyn by surprise. “The ‘secret’ forces the two young women to examine their upbringing, while they also reunite with people from their past and confront their neighborhood’s changing cultural landscape.”

A common trope in coming-of-age shows is that of adult fear, often involving apprehension over facing up to adulthood or finding out a huge secret following the loss of a spouse or parent. Vida presents this theme with the death of the young women’s mother, but updates it for a modern audience by exploring LGBTQI themes via her secret sexual identity. “The tragedy opens up a whole new set of problems, while also giving us some much-needed representation for queer Latin women,” wrote Out.

While the sisters’ plan was to make an appearance the funeral, sell their mother’s bar, and leave, things take a turn for the complicated when faced with Eddy and what to do with their mom’s business. With real estate developers stepping in to renovate the bar, along with Eddy, the two sisters have to figure out how best to handle the business and honor the memory of their mother.

Meanwhile, Chelsea Rendon (Netflix’s Bright) plays a vlogger who fights against the takeover of the neighborhood and urges people to take action within the heated climate of the gentrification of Eastside LA. Overcoming adversity is something that comes up in most coming-of-age films. However, with Vida this theme is portrayed in a fresh new way via the gentrification of the neighborhood the sisters grew up in. Forbes noted, “It’s a show about a specific group facing challenges many can relate to. For what it’s trying to say about Latino culture and the socio-economic divide the Latino community faces in the United States, Vida is a commendable piece of television.”