Drew Barrymore has been around the Hollywood block a few times in her life. She started her career as a child actress, and despite some turmoil here & there, she’s still providing the public with entertainment.

Barrymore is mostly known for doing movies, and younger audiences may recognize her from the recently canceled Netflix series Santa Clarita Diet. However, Drew Barrymore appears to have moved from doing movies to hosting a daytime television show. Just this week, the actress has become the host of the The Drew Barrymore Show.

With Ellen DeGeneres’s audience abandoning her after countless accusations of being mean both on and off set, Barrymore could be poised to become America’s newest daytime sweetheart.

The trailer for Barrymore’s new talk show promises to be real & down to earth. It’s a claim many make but not one everyone follows through on. After pursuing through various segments of the new show, it’s safe to say we feel like Barrymore is delivering on what she promised.

The show is mostly her just hanging out and having fun while being on a polished studio set. While there are obviously scripted segments, Barrymore doesn’t have a “host presence” – Barrymore comes across more like a really excited YouTuber – but not in an awkward forced kind of way. She feels genuine.

Barrymore’s show honestly feels like what DeGeneres imagines her show to be. Fun, light hearted, natural, and silly.

Barrymore’s show stands out for a number of reasons and the first one is the set. These days, talk show sets tend toward cold, stark, and minimalist. DeGeneres’s blue & white set comes to mind first, or the set of Live with Kelly and Ryan and its sparse set of bar height chairs.

The Drew Barrymore Show said “screw that”, apparently, because the set is filled with warm colors – yellows, golds, and orangey browns. Not to mention the set designers laughed in the face of minimalism and threw as many objects onto Barrymore’s desk as they could – books, binders, highlighters, and an old bowl are all on display amongst other items. It looks exactly like a normal person’s desk, just three times the size. 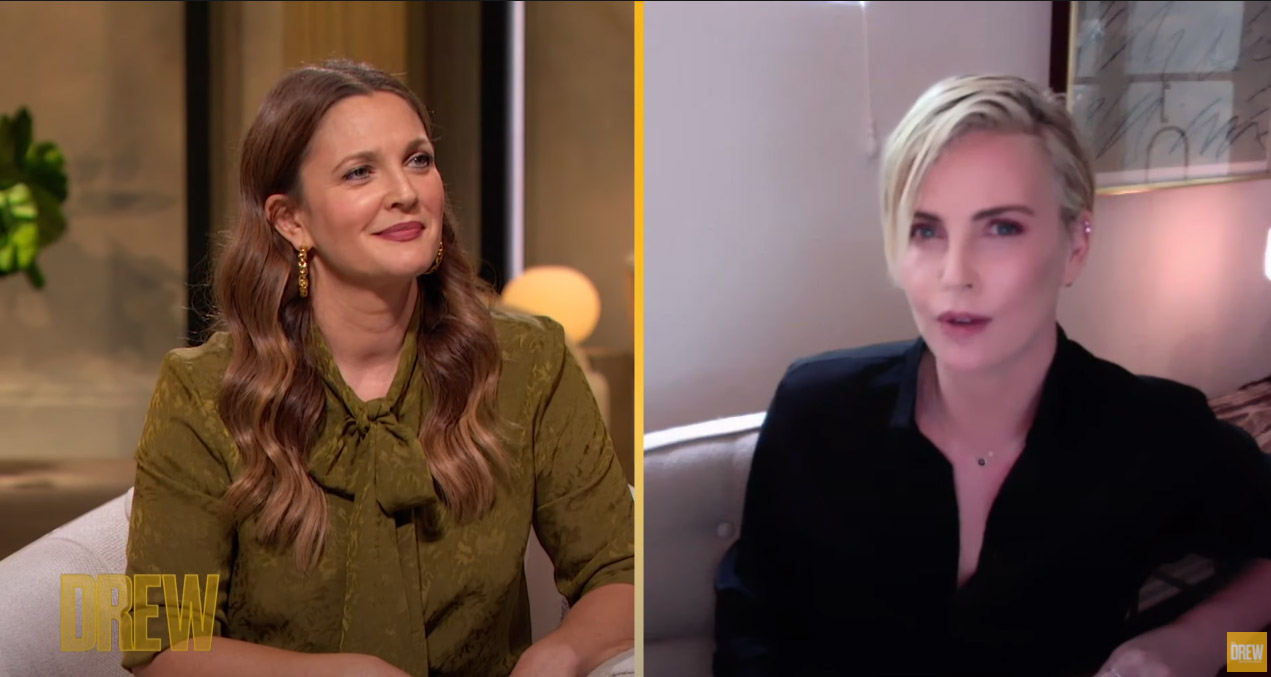 The guest list is also fairly impressive so far. From Reese Whitherspoon to Billy Eichner, to Charlize Theron, the show is never lacking in extra star-power (as if Barrymore wasn’t enough).

It helps immensely that Barrymore actually knows a lot of the people she talks to since she’s been in the entertainment industry for so long – her interview with Jane Fonda showcases this. It makes the conversations actually feel like friends catching up. There’s no pretense or stiff & awkward interactions, because the host isn’t pretending to be longtime friends with the guest they met 15 minutes ago. 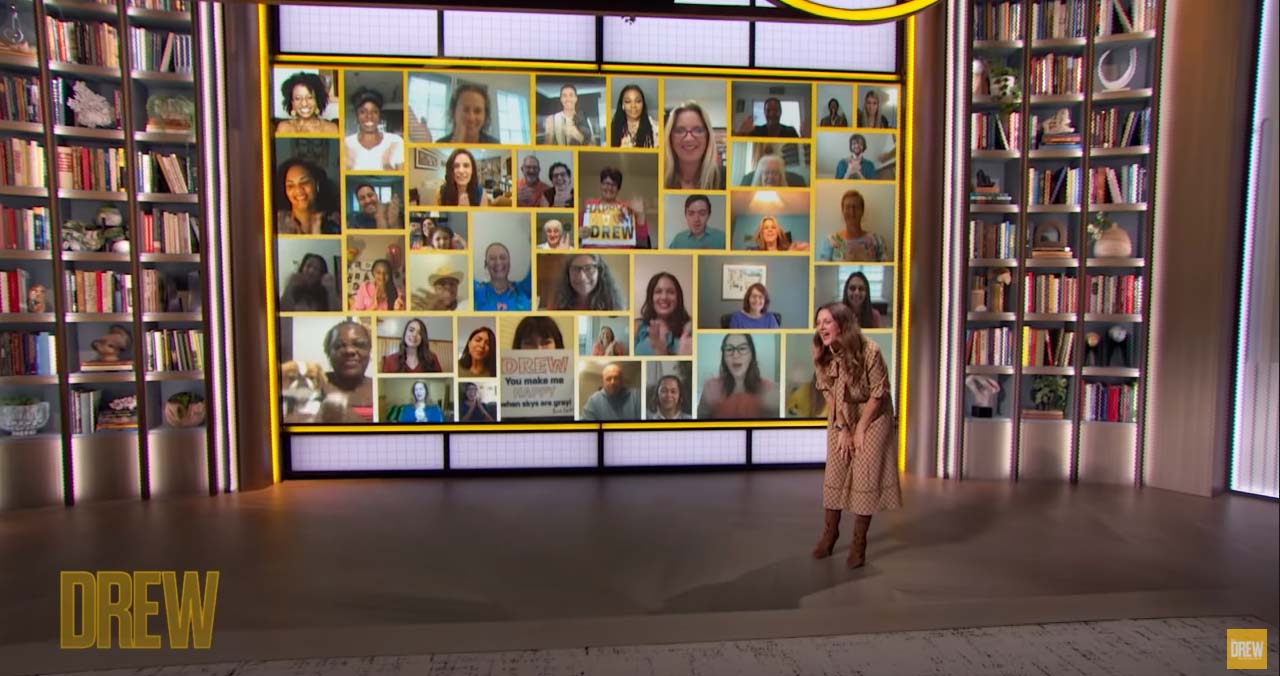 Starting in the pandemic

The show bravely began production during the pandemic, so while The Drew Barrymore Show might not be exactly how they imagined it, they’re making it work.

Instead of a live studio audience, they have a giant wall in the form of a screen, filled with fans watching via video call. Barrymore interacts with them some and they cheer on cue just like a regular studio audience.

Interviews are also conducted via video chat, just like all the other talk shows currently making new episodes. 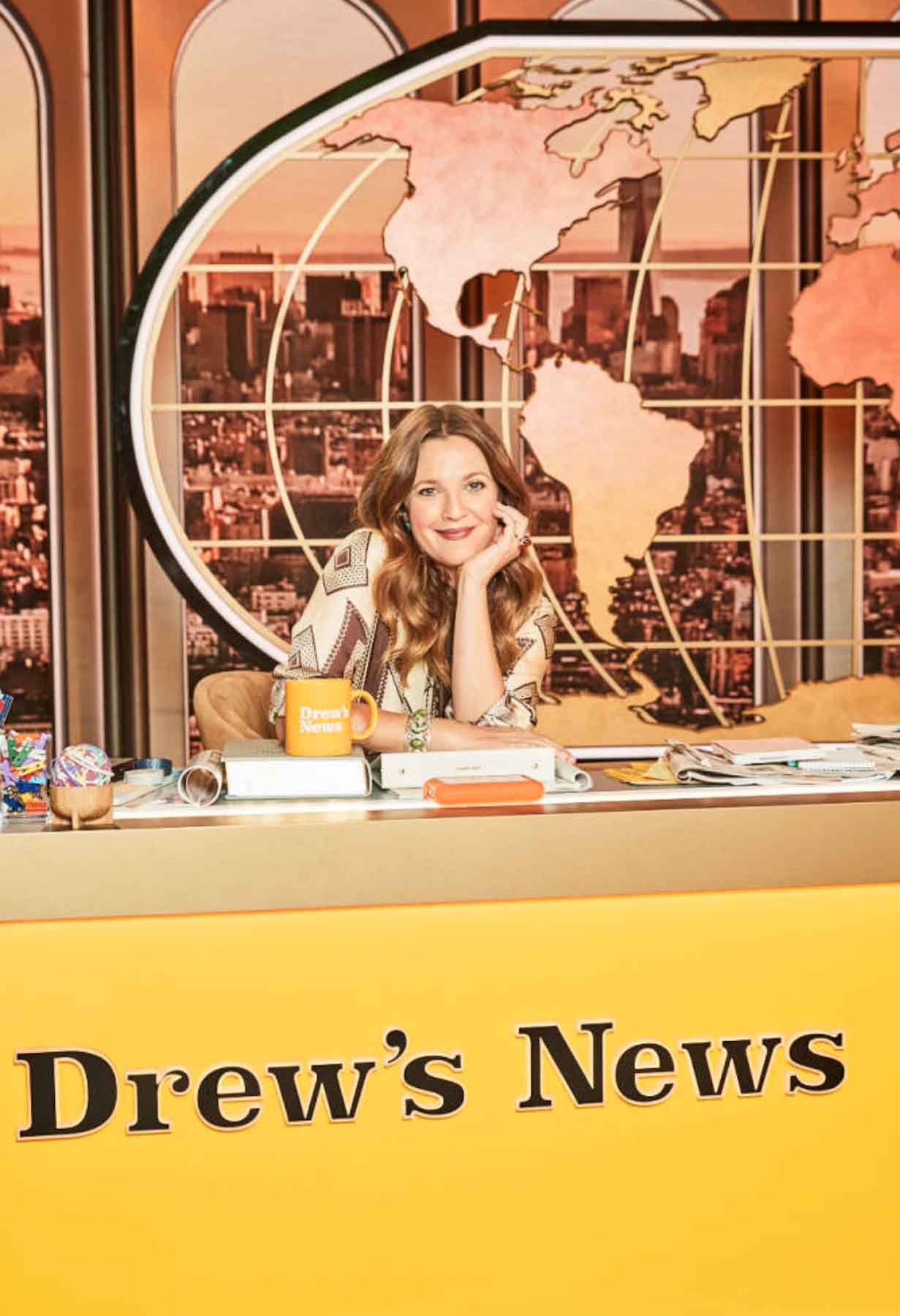 Could it be the next hot daytime show?

Ellen DeGeneres has long been considered the queen of daytime television, but with all the scandals she’s gone through this year her grip on the crown may be slipping, and Barrymore might be running in to catch it.

This unapologetically honest and relaxed approach to hosting could be exactly what people are itching for these days.

The two things which might hold the show back is the lack of advertising and the fact that it isn’t airing on a specific network. You’ll have to check your local listings to find out which channel The Drew Barrymore Show airs on in your area. That said, it looks like Barrymore saying goodbye to the movies might have been a good move for her.